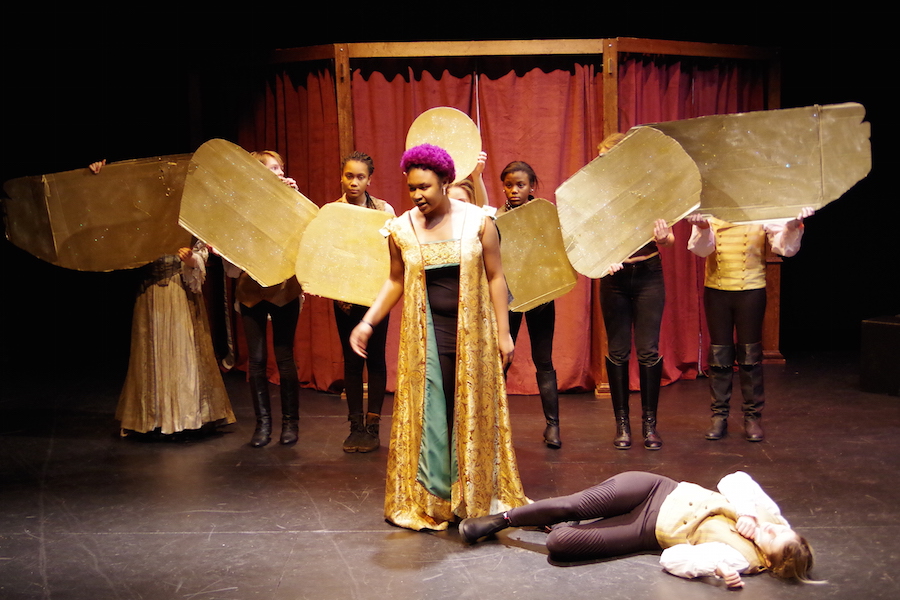 Ever since Emma Kennedy saw Cymbeline at Yale Repertory Theatre in the spring of 2016, it’s been her favorite Shakespeare play. But it wasn’t until she took on the role of Posthumus Leonatus—“the dumbest guy on either side of the Thames"—that she realized it was a story about taking back your narrative after losing your sense of self.

Kennedy is one of 15 young actors from schools, towns and neighborhoods across greater New Haven enrolled in Elm Shakespeare Company’s Teen Troupe, which is directed by Education Program Manager Sarah Bowles. This weekend, the troupe is performing William Shakespeare’s Cymbeline—one of the Bard’s most complicated plays—in the Kendall Drama Lab at Southern Connecticut State University’s Lyman Center for the Performing Arts.

Performances, which run Friday Dec. 14 at 7 p.m. and and Saturday Dec. 15 at 3 and 7 p.m., mark the culmination of a semester’s worth of work for the students. Tickets are $10, and proceeds go to funding scholarships to Elm Shakespeare’s educational programs. 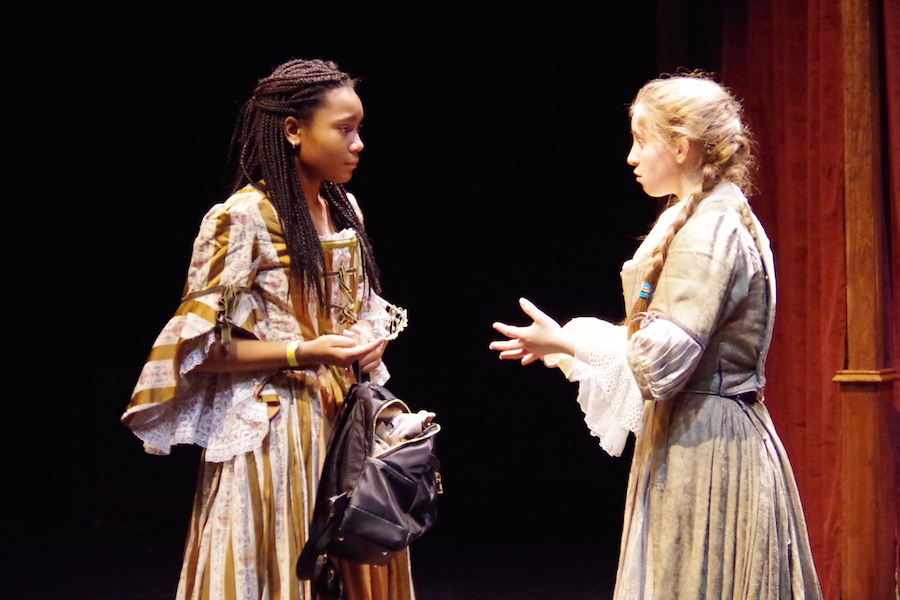 Cymbeline is “Shakespeare’s fairytale” because “the story is outrageous,” she said in an interview this week. The plot, which she described as full of “twists and turns,” features an evil queen, true love, arranged marriages, secret marriages, banishment, an adventure in the woods, and lots of “intervention” by the gods, including an on-stage appearance from Jupiter.

Bowles explained that she never starts a semester with the Teen Troupe with a play picked out or a “preconceived vision for how I want the show to be.” Instead, choosing the play is a group decision with the students. “Half the fun is diving into foreign waters together,” she said.

Kennedy, now a sophomore at the Educational Center for the Arts (ECA), has been lobbying for Cymbeline since she started with the group last year. But it wasn’t until this fall when the troupe read the synopsis and acted out some of the scenes that the other teens got hooked on the show as well. 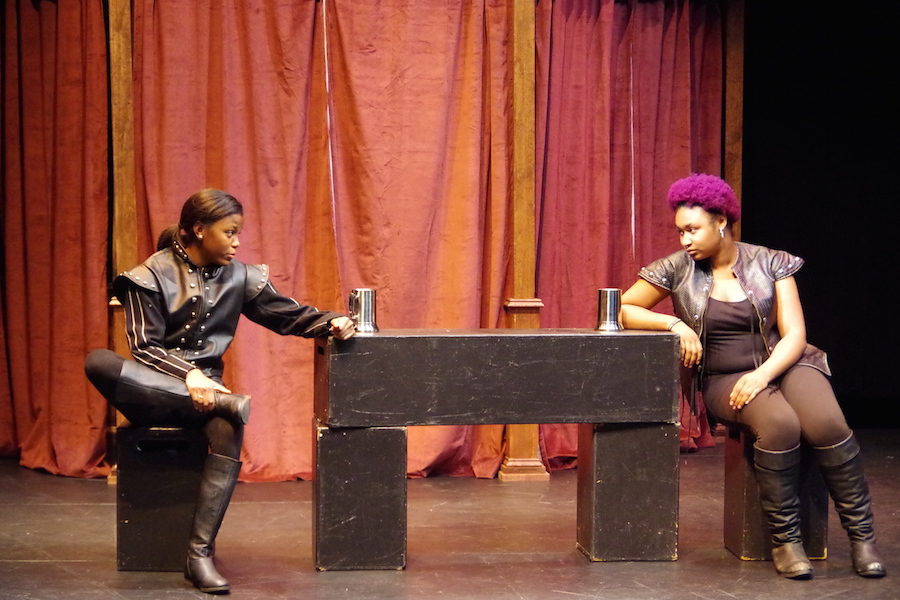 Bowles suspects that has something to do with the young people in the play “defying the patriarchy” and rejecting expectations. Everyone is familiar with the trope of a princess who has to marry a person she doesn’t want to marry, but Cymbeline isn’t about that struggle.

“Even before the play has begun, the princess has already married who she wants to marry,” says Bowles. “She doesn’t ask, she doesn’t plead. She doesn’t cry and hem and haw about it. She just does it.”

Fifteen year old homeschooler Ariel Mayer pointed out how the show “has every plot element Shakespeare’s ever done,” including star-crossed lovers, war, know-it-all messengers, mistaken identity, a girl disguising herself as a boy, and long-lost siblings.

“It’s about love, acceptance, and forgiveness—especially forgiveness, in our crazy world. The characters have to be able to push through envy and disdain to find love again,” Mayer said.

“It’s a show about loss. It’s a show about losing your sense of self,” Kennedy said while taking a break from the Teen Troupes tech rehearsal on Thursday. “Imogen loses herself in the forest and Posthumus Leonatus loses himself in jealousy and rage.”

There’s “a lot of tough stuff going on” with the characters. They make bad decisions, have regrets, and go through remarkable changes. “It really strikes a chord,” she said.

When she found out the troupe was performing Cymbeline, Kennedy said she immediately dug into a series of Youtube lectures from Harvard University Professor Marjorie Garber, trying to learn all she could about the deeper themes of the show.

Though she initially wanted to play a female role in the show—it’s Shakespeare, so those are in short supply—Kennedy quickly changed her tune when she read over the script and got to know the character Posthumus.

One of the best parts for Kennedy is the creative agency Bowles gives the students. “We really have control over where we want to go with our characters,” Kennedy said, adding that Bowles “wants us to put our own emotion into the characters.”

So when she found out that the Posthumus Leonatus monologue that made her cry when she first read it was slated to be cut from the troupe’s abridged version, she appealed directly to Bowles and her persuasive email earned the monologue a place in the show.

Kennedy said she finds some of the more misogynistic parts of the play “uncomfortable,” such when as the villain Iachimo hatches a plot to seduce the princess Imogen, playing on Posthumus’ jealousy and insecurities.

“It’s hard to watch,” she said. “And it’s tough to be playing Posthumus in a scene with him.” But the fact that the characters repent at the end kept her going. “Iachimo is a creep, but he does eventually figure out what he did wrong,” she said.

“It really puts things into perspective, though,” said Leamon.

“You think you might be having a hard time, but it’s not as bad as what the characters are going through,” Hutchinson agreed.

The actors haven’t just learned their lines and blocking and practiced their diction—which was crisp, even around braces, at a final rehearsal Thursday evening. They’ve mined their characters and themselves, digging deep for authentic emotions. As Iachimo, Joss Aiken went from brash, aggressive posturing in one scene to humble and beseeching in the next.

As the Queen, Leamon used her voice to be a chameleon, feigning shock with a high, shrieky voice, then dropping into a lower register for a snarky aside before going all sing-song-y as she cooks up a lie.

“I’ve learned a lot watching Eva” said Leamon, referring to fellow trouper Eva LaRue Barber, who plays Cloten in the show. “Her character is just like mine, but younger and more sassy,” Leamon explained.

As Pisanio, Mayer held the stage alone for her big monologue, cycling through despair, anger, and disbelief, tortured by the evil deed that has been asked of her. She let each emotion write itself on her face, and in her voice and gestures. Whatever else may be going on in their lives, these accomplished young actors are sure of themselves on stage. 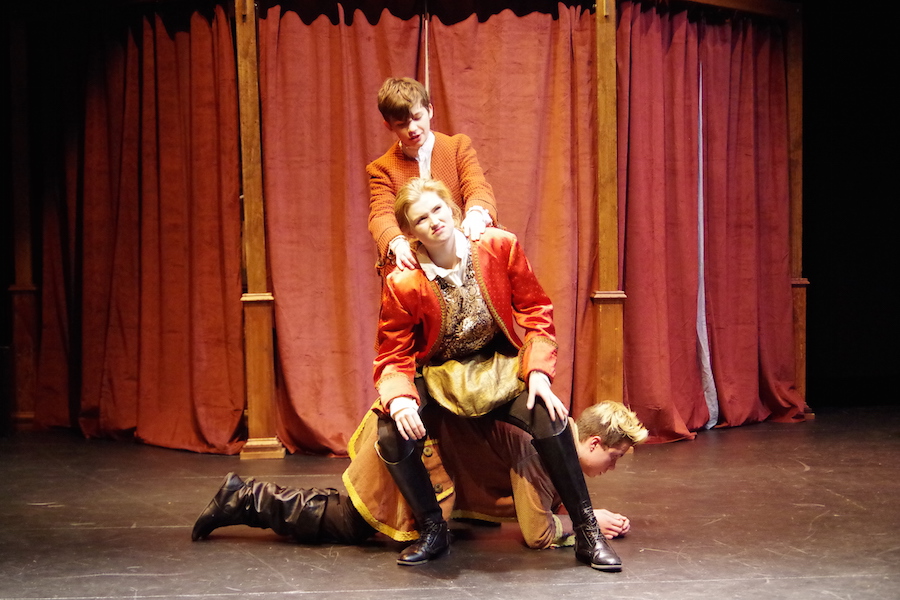 The actors ran through the battle scene, running onto the stage in pairs and trios, wielding wooden swords and leaning into the combat. The students practiced making the fights look realistic with their vocalizations and facial expressions. Led by the example of the more experienced troupers, the ensemble stopped being self-conscious and started to really sell the fight.

Later she called on the actors to take it a step further. “The story I’m not seeing is the people being chased; I need to see your decision to run away,” she said, which prompted the actors to add fear and panic to their expressions at just the right moments.

The teens were resourceful and ready to take on the extra tasks that help the production run smoothly. When Bowles noticed a prop that needed to be prepared during a certain scene break, she asked “Who’s available?” and the back curtains split apart to reveal a half dozen young faces and the hands of several volunteers in the air.

After one scene, Bowles needed to make sure one of the actors started to speak up more, something this actor was struggling with. Instead of yelling to drive the point home, Bowles chose whisper the direction only to the actor who needed to hear it—and got results.

Later on, 15-year-old homeschooler Ariel Mayer popped out of rehearsal to talk about the troupe.

“It’s such a supportive and wholesome group that loves and accepts each other no matter what,” she said. “But we also push each other a fair amount to inspire each other,.”

Working with the Teen Troupe is “my favorite part of the week,” said Bowles. “I’ve really tried to make it a warm, supportive, inclusive environment. It’s not a competition about who has the lead role or who is the best actor. It’s really a team effort. I hope that the environment that we create will spread to their outside lives.”

When Bowles started working with the Teen Troupe, her other hope was that students would develop a love for Shakespeare. Now she says, “I can’t call it a hope anymore because I know they do love Shakespeare.”

“You can’t get them to stop talking about Shakespeare,” she said. “They relish the language and I hear them using more complex and interesting and delicious language in their every day lives when they come in.”

And her work doesn’t go unnoticed. “It’s not like other plays where the director is cold,” said Leamon. “Sarah is so nice and she talks to us like we’re the same age.”

Without prompting, Hutchinson and Leamon turned the conversation towards the ways Shakespeare has changed their life—“Like when you accidentally quote Shakespeare or you’re carrying around a copy of Romeo and Juliet,” said Hutchinson.

“This is my favorite part of the week,” said Hutchinson. “I think to myself: ‘I just gotta get through school and then I can go to Teen Troupe.’”

And the draw is more than just intellectual: “There’s no way you can do this and not make friends,” said Kennedy.

“It’s like a family,” said Hutchinson. “So much could be going on, but you can come here to get your mind off of things.”

But it was trouper Kay Poole, playing Arviragus, who summed it up on stage when her character met a stranger in the woods. She extended her arms and gave a bright smile.

“Be sprightly, for you fall 'mongst friends.”