The Revolution Will Be Harmonized 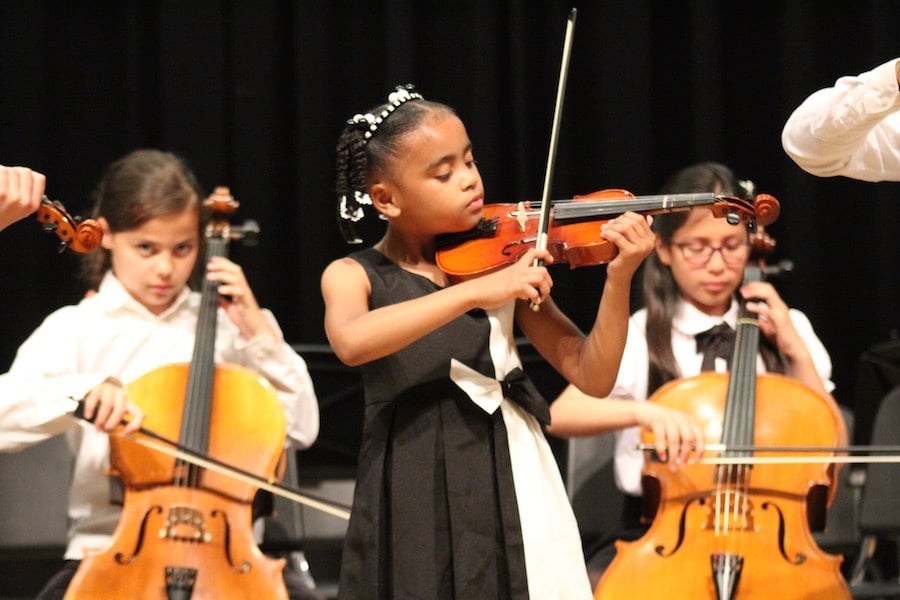 It was a little past 4 p.m. on a Friday afternoon in a cramped, cacophonous Whalley Avenue garage when Robert Oakley made a stunning confession: there was no place in the city he’d rather be. And he was in no particular rush to get home.

A rising senior at Wilbur Cross High School, Oakley is one of 90 students at Music Haven, a New Haven nonprofit that teaches violin, viola, cello, piano, and guitar, to kids in the city’s high-poverty “promise zone” neighborhoods. This year, it is celebrating a decade of evolution, and figuring out what it means to continue in a landscape of great need, and greater financial uncertainty.

Music Haven began as a single, resonant note somewhere between Colorado and Connecticut, where Yale music grad Tina Lee Hadari was earning her doctorate in music at the University of Colorado at Boulder.

A founding member of the Vinca Quartet, Hadari had begun to feel “not completely fulfilled” after each performance, as audiences packed up and headed home for the evening. She missed teaching music to low-income kids, which she had done for three years in East Harlem. She sensed, too, a growing need within herself to push the mothball-lined confines of chamber music.

“There was a need that I saw in the community, and there was my need, my personal need, wanting to believe that the arts could change lives,” she said in an interview with The Arts Paper. “Coming from a professional string quartet … I was left feeling empty. I didn’t really feel like we were making that much impact on anyone.“

She and fellow quartet members Michelle Lee, Christopher Jenkins, and Elise Pittenger began to travel between Colorado and New Haven, performing at all-school assemblies in John C. Daniels and Wexler Grant elementary schools. They’d play some music, then made a pitch: free music lessons in violin, viola and cello for students between second and fifth grade. Students were wildly receptive. For 20 available slots, Hadari received more than 60 applicants.

The idea, Hadari said, was music as a new activist frontier, with an armory of pint-sized instruments. Like the Manchester Craftsmen's Guild in Pittsburgh, the nonprofit would make artists a revitalizing force in an under-resourced community.

Music Haven was officially incorporated as a nonprofit in 2006. Having relocated to New Haven, Hadari didn’t know if the group would make it beyond a year or two. She was working with a budget of $48,000 for four teaching musicians and 20 students who were getting tuition-free lessons. All of the quartet’s members were working second and third jobs.

But the group began to gain traction. What had started as some 20 students in 2007 became 30, then 40, then upwards of 100 students over the next eight years. With support from development director Netta Hadari and a growing board of directors, Hadari grew Music Haven’s budget, scoring grants and funding that allowed it to expand. Original quartet members were replaced by resident teaching artists who doubled as the Haven String Quartet.

The organization earned local, then state, then national recognition. Once second- and third-graders began to form their own quartets and quintets (perhaps most memorable, the Phat Orangez) as they entered high school. And students started performing not just in the community, but at juried performances and contests, winning entry into some of the country’s most prestigious summer music programs.

Everything operated out of a large former garage at 117 Whalley Ave., where passers-by could see students practicing through large, beckoning windows.

“I wanted folks to be able to walk past and say “what is that?” and kind of wander in,” she said. “And that’s what happened.”

But by 2015, Hadari was also ready for some of her own transitions. While Music Haven had grown from a musical zygote into a rambunctious 9-year-old, she had had two children of her own. The board of directors was strong enough to support a new executive director. In June of that year, she and development director Netta Hadari bid the organization farewell. There to take the baton was Mandi Jackson, a community organizer who had founded New Haven Works in 2013.

“It was very bittersweet,” Hadari said. “I wanted the organization to thrive and expand even more and really take off, and I didn’t know if i was the person to be able to do that.”

Jackson entered ready to take on the challenge. In learning to run “my first arts organization, really,” she found herself doing a lot of listening — to both instructors and students. Senior Resident Musician Colin Benn, a member of the Haven String Quartet through 2015, expressed a desire to start a class for students who had never played before. Enter Music 101, a 10-hour (three hours, three days a week) weekly intensive in strings, percussion, guitar, and bass for 16 new students each year.

Then kids studying violin with Senior Resident Musician Yaira Matyakubova wanted to know how they could contribute to the refugee crisis — with their musical instruments. In Fall 2015, they did a performance and “instrument petting zoo” at Integrated Refugee & Immigrant Services (IRIS). Then Matyakubova scored funding for a weekly after-school class for refugee kids. Their first recital was June 1.

But keeping the organization going will be an uphill battle. At 90 students, Music Haven is close to its upper limit. On the state level — where Connecticut’s overall budget is faltering — Music Haven doesn’t have (and never will, according to Jackson) the same kind of line item that the Neighborhood Music School or International Festival of Arts & Ideas has.

Arts funding, meanwhile, falls beneath economic development, and organizations are deemed fundable based on the number of jobs they create or ticket sales they generate. An Arts & Community Impact grant that the nonprofit scored in the 2016-17 fiscal year has been cut from the budget going forward. Because Music Haven offers tuition-free access and does not charge for most of its programming, the organization has found itself at a budgetary disadvantage. A sot of “blind spot” for any state funding, Jackson said.

“I’ve found that often, what gets lost is this issue of access,” she said on a recent Friday, the sound of practicing students swelling behind her. “There’s the presumption that the arts are for affluent people, and good luck to anybody who doesn’t have means who wants to participate in the arts or really needs to have access to arts programming. People can’t understand why it’s possibly so important for a kid to have violin lessons. If you spend 10 minutes here, you can tell.“

What keeps her motivated, she said, is the organization’s students — many of whom have taken on mentoring responsibilities on top of their own practice schedules. Like Sofia Galván , a junior at Wilbur Cross who joined Music Haven around its conception. She’s not a fan of practicing, she said — but she recognizes the payoff. Like an improved SAT score when she linked her studying practices with her rehearsal schedule. Or a “better way to express creativity” that got her into the Take a Stand Festival, where she and fellow Music Havener Christofer Zunin will train and perform this July with Gustavo Dudamel, music director at the LA Phil.

Or Oakley, who credits hours of nightly viola practice and performance — almost five straight years of it — with helping him emerge from a shy shell and meet kids from outside of his neighborhood and high school.

“I thought classical music would be … old,” said Oakley, whose favorite composer is Vivaldi. “Then I became a member of the Music Haven family … I was always an expressive person, but I feel like I have a much more valuable way to express myself now. It’s impossible to listen to music, and to play music, and to not feel something.””

In May, Oakley lived those words, joining Music Haven’s student orchestra Harmony In Action alongside several soloists and members of the Haven String Quartet, who double as full-time instructors. For the first time in its history, the group stood almost completely united at a Haven String Quartet concert, rather than one of its performance parties. Beethoven and Vivaldi coasted over the audience.

“It feels like a big part of bringing the community together,” Oakley said.