Theater Students Get Out The Vote 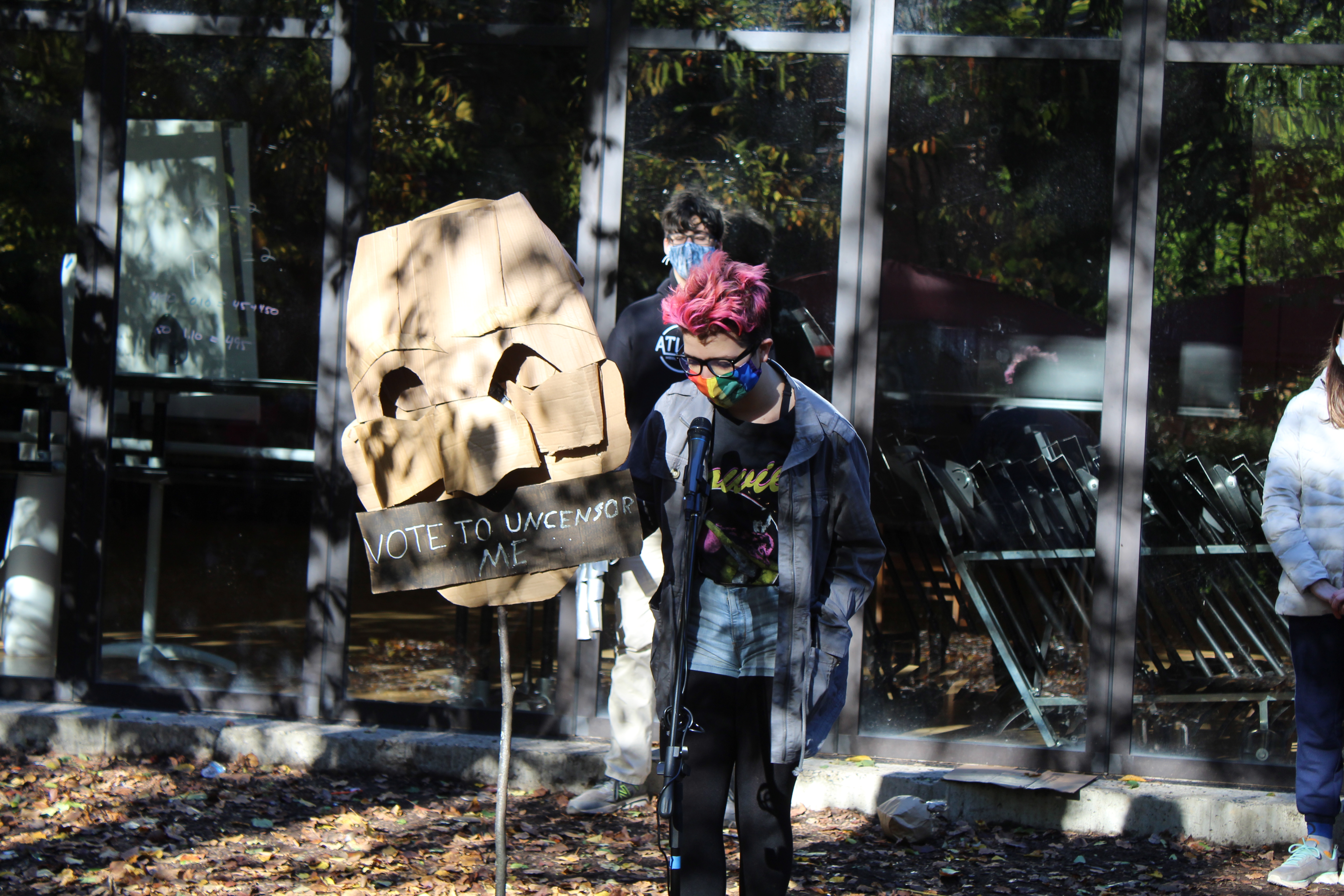 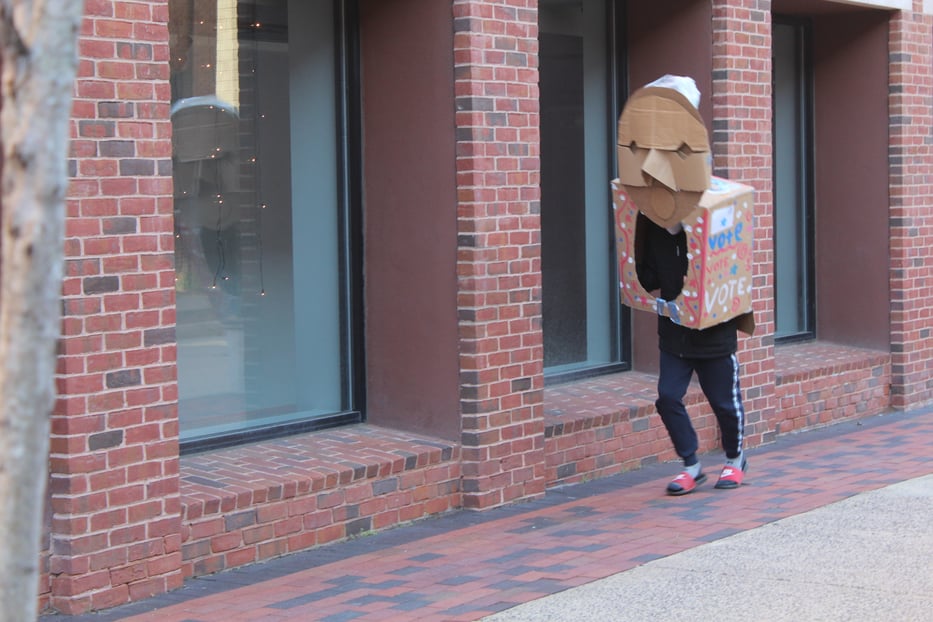 A student dressed as a ballot box marches down Audubon Street as part of ATLAS's Get Out The Vote Puppet Parade. Arturo Pineda Photos.

A young boy dressed up as a cardboard ballot box marched down Audubon Street in front of Koffee? New Haven. Across all sides of the box, the word “vote” was written in red, white, and blue of the American flag. Behind him, a student carried a cardboard head with black tape covering the mouth.

Both of them are students at ATLAS, the independent middle school run out of Neighborhood Music School. Monday afternoon, they took part in a Get Out The Vote Puppet Parade on Audubon Street, where the school is located. Students marched down the street and into its grassy “park of the arts” with handmade signs and costumes all meant to inspire voter awareness and turnout. It came less than 24 hours before polls opened Tuesday morning.

The parade was the culmination of months of studying the fundamentals of American government and the history of voter rights. The school’s curriculum—which uses applied theater as a form of teaching—draws heavily on Augusto Boal’s titular work, The Theatre of the Oppressed. Boal developed the theatre from his work with peasant and worker populations in Latin America. In his theatre, spectators become actors and engage with ideas like systemic inequality or oppression.

Boal’s work aligns itself with the school’s mission of implementing theater as an anti-racist and anti-bias teaching technique, said Artistic Director Maria Giarrizo-Bartz. The parade of puppets was an example of direct action in which students used their power to obtain their goal of increasing voter awareness.

Because of its independent status, the school’s curriculum exists entirely outside of state guidelines or regulations for middle school education. Giarrizo-Bartz noted that the school does follow common core standards.

While they are still too young to vote, students seemed acutely aware of the lasting impact the 2020 election will have on their future. Throughout their coursework in social studies courses, they have learned about the inclusion and exclusion of certain identity groups in electoral politics. Giarrizo-Bartz spoke about the importance of acknowledging that voting used to be a privilege restricted to white male landowning citizens, and the history of disenfranchisement for marginalized communities.

One student at the school whose parents asked that their name be withheld, worried about the future of LGBTQ+ rights under another potential Trump term. Under the Trump administration, LGBTQ+ rights have been gutted. Healthcare providers are now able to refuse service to trans people. The administration has also rolled back protections on trans students, including trans student athletes in a case that hit home in New Haven last month.

For them, the election is a matter of life or death for marginalized communities. Voting, much like the slam poetry they perform, is a way to find their voice and use it for something to believe in.

The students marched across the street chanting, “Your vote is your voice/You better make it loud!”

Another student, who asked to not be named, spoke about the possibility that decades of civil rights work—including the legalization of gay marriage at the federal level—could be undone in a matter of years. For them, voting is about a continuous fight to protect rights.

“Voting in our democracy is nowhere near perfect,” they said. “But it is important for us to vote to fight for our rights.”

Their peer said she wished that she could vote but hoped that the parade encouraged people to vote and keep their spirits high.

A a student at ATLAS reciting parts of Jane Adams' 1911 Speech on Woman Suffrage.

A young man recited an excerpt from King’s Give Us the Ballot address delivered at the Prayer Pilgrimage for Freedom in 1957. The event commemorated the third anniversary of the landmark Brown v. Board of Education ruling and called out the southern states who had refused to integrate their schools. It felt, chillingly, right on time.

“Give us the ballot, and we will no longer plead to the federal government for passage of an anti-lynching law," they read. "We will by the power of our vote write the law on the statute books of the South and bring an end to the dastardly acts of the hooded perpetrators of violence.”