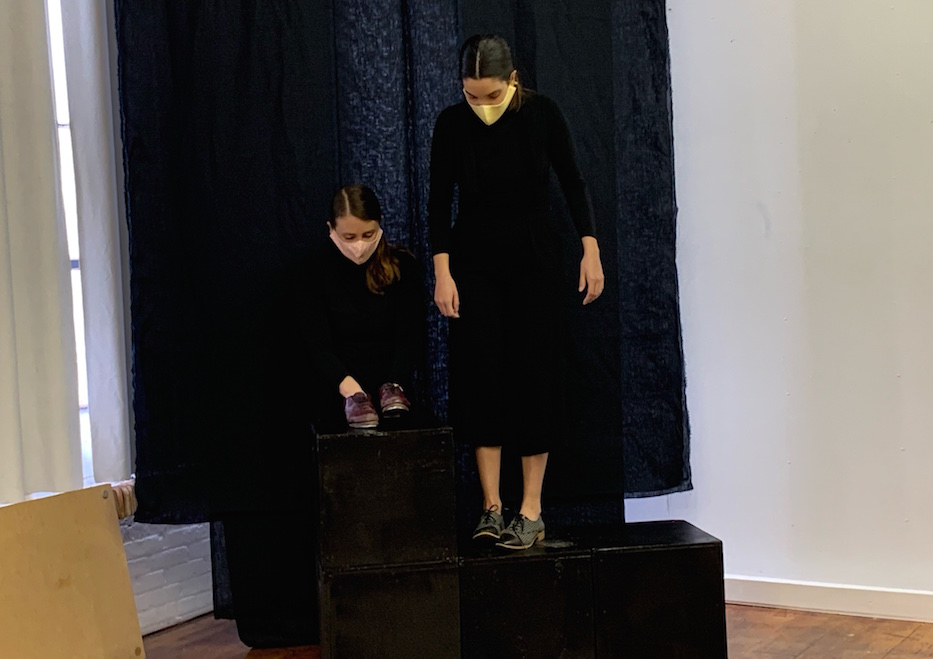 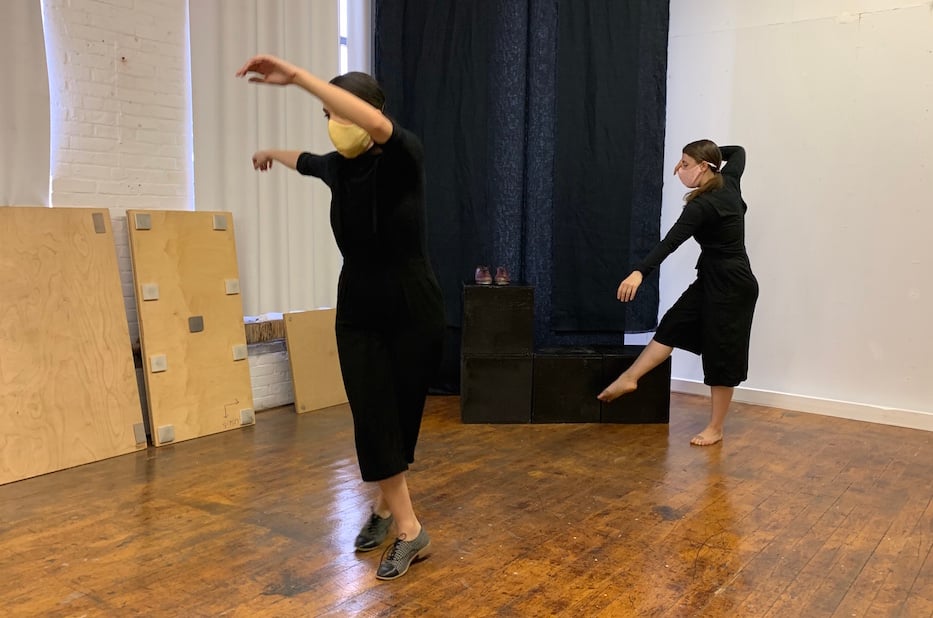 Four feet touched the floor, then lifted off in time with the dancers’ bodies and breath. At the front of the room, Luiza Karnas slid into a rhythm that she recognized. Tap tap tap tippity skid tap.

Just a few feet behind her, Alexis Robbins looked toward the window, and lifted one leg into the air. For a moment, she was completely still. The two became a tableau, with an invisible line drawn between them. As they snapped back into movement, that line wavered, and then disappeared.

Sunday afternoon, Robbins and Karnas took on the tap-contemporary divide in three thrilling, back-to-back performances of Are You Or Do You?, a work that has been in progress since June 2019. Streaming from studio i in Erector Square, the event also featured choreography to Max Roach’s “Little Folks.” A limited-capacity, masked in-person audience was present for all three shows. Christina Kane, who is half of studio i, ran the tech.

“This is insane,” Robbins said at the top of the 1 p.m. show. “We haven’t performed around human beings in a long time.”

“Little Folks” kicked off the afternoon. From the beginning of the performance, she and Karnas moved in time with each other and the music, listening for both the downbeats and the spaces in between each other’s movements. Around them, a fleet of wooden boards—some built for tap dancing, some bought at Home Depot—leaned against the wall and laid  on the floor. A stack of black wooden crates sat untouched by a black curtain, their painted surfaces gleaming. 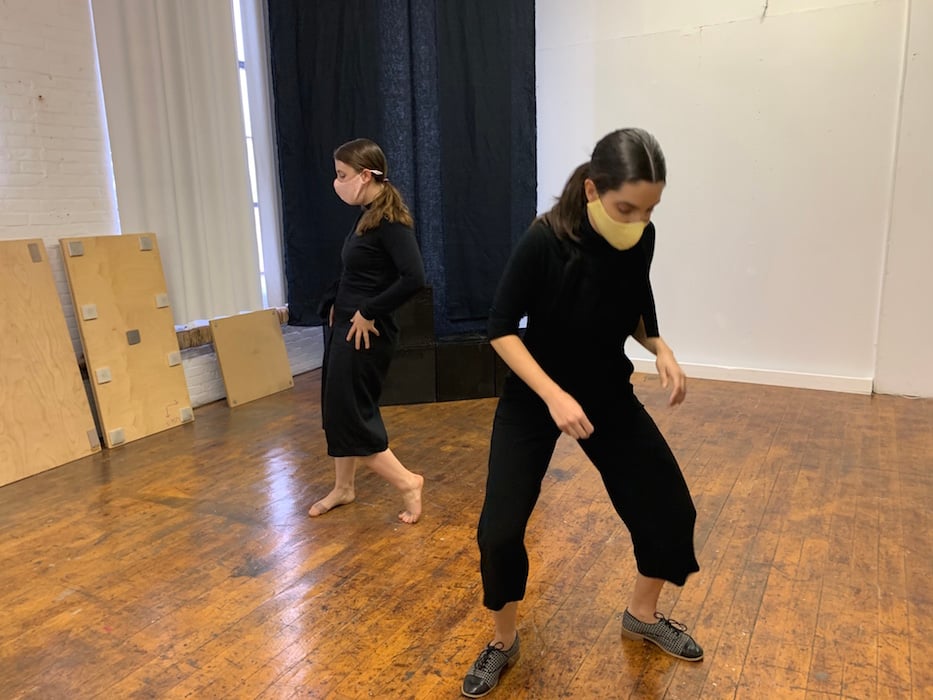 No sooner had the opening of “Little Folks” dropped—a hissing, whispering cymbal that invites in the horns—than the two dancers moved in unison, feet insistent as they clacked on two boards laid out side by side. The air crackled, electric and warm around them. In time with the music, their arms extended out, reaching toward the ceiling. They listened—for which notes had the capacity for propulsive, athletic dancing which for elegance and humor, and which for both.

As Sonny Rollins came in on tenor sax, Robbins stepped back and let Karnas take over. She nodded to the full-bellied sax and responded, her feet fast and deliberate as the instrument ran circles around the band. The sax began a dizzying, steep ascent over piano and horn, and she moved from one board to the other, leaning into the rhythm at the waist and shoulders. A loose yellow sweater swung forward and back with each movement.

Listening for the right moment, Robbins jumped back in for a piano solo, as Bill Wallace tickled the keys over a loudspeaker. She became a force, feet steady as they hard click-clicked their way through the notes. She pounded and then slid, rotating her foot as the keys came one after the other. As horns blared back in—da ba dum bah dah—Karnas was suddenly back at her side, ready to dance out the final minute of the piece in unison.

On Zoom, members of the audience filled the chat with hearts and exclamations of approval. In the studio, all eight attendees clapped wildly. Victoria McEvoy, who has been Robbins’ student for several years, made smalltalk with the in-person audience as the two dancers prepared for Are You Or Do You? behind a long black curtain.

It was two rusty, forgotten rituals coming together after over a year: ensemble dancing and an audience figuring out how to respond in real time. Over the three performances, attendees came from as close as East Rock and as far away as Brazil and Norway. 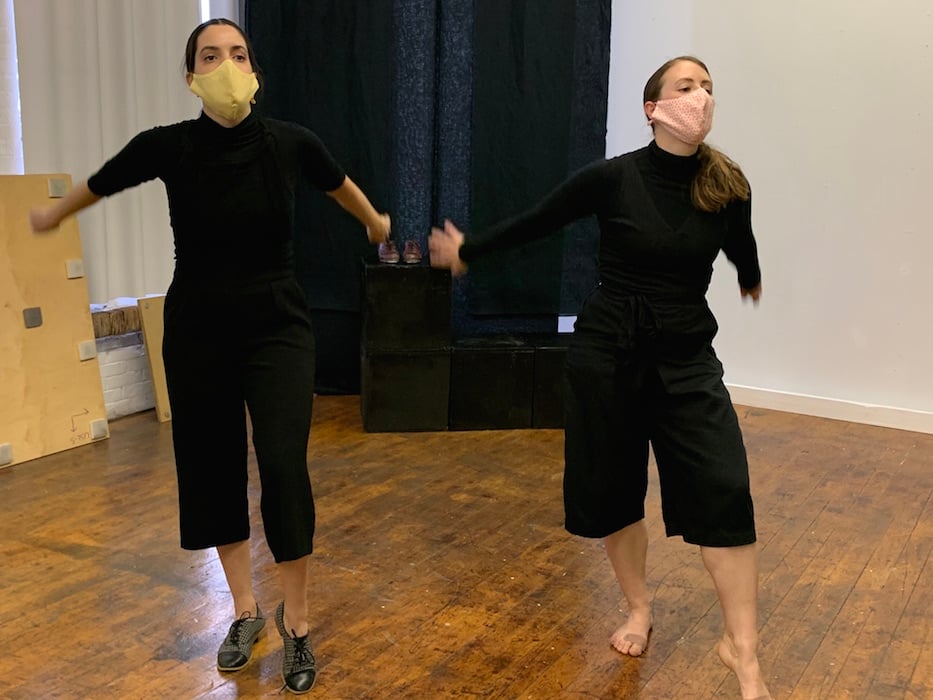 The number doubled as a crash course for attendees in the use of one’s whole body as a percussive instrument and storytelling device. Robbins, who is the artistic director of kamrDANCE, said she “fell in love” with Roach’s 1957 album Jazz In ¾ Time because of the musician’s ability to play every part of his drums, from their taut, vibrating surface to their round, hollowed-out bodies.

“And I’m trying to do that with our feet,” she said, pointing to the sides of her metal-soled shoes. She added that physical improvisation, like jazz music, is a fundamental part of the piece—and of almost every number she does. Without it, she said, “there’s no tap.”

She said the genre often lives in a world of its own, sometimes to the detriment of dance more broadly. As a tap dancer who also lives in the contemporary world, she often faces the assumption that the styles can’t coexist. “It feels like I’m never my full self all the time,” she said.

In Are You Or Do You? she and Karnas saw a chance to be the bridge. The two, who have known each other for years, started working on the piece in 2019 as a riff on dancers’ practice of marking choreography with their hands. The longer they collaborated—carrying their boards with them everywhere they went, as tappers singularly must—the more it grew into a critique. The two saw the line that the field draws between tap and contemporary dance. The work, which is still in progress, presents one possible antidote in real time.

“It started to become an exploration of dance and identity,” Robbins said.

From the moment the two appeared onstage Sunday, they mined the work for its inherent humor. Standing behind four stacked, painted black boxes, they clapped, elbow-thumped, and finger-scurried out onto the boxes, the pads of their fingertips suddenly transformed into feet. They began rhythmically, tapping out movements before a sudden woo! and a burst of garbled language. Slowly, their hands took on different movements, as if working to translate each other in real time. 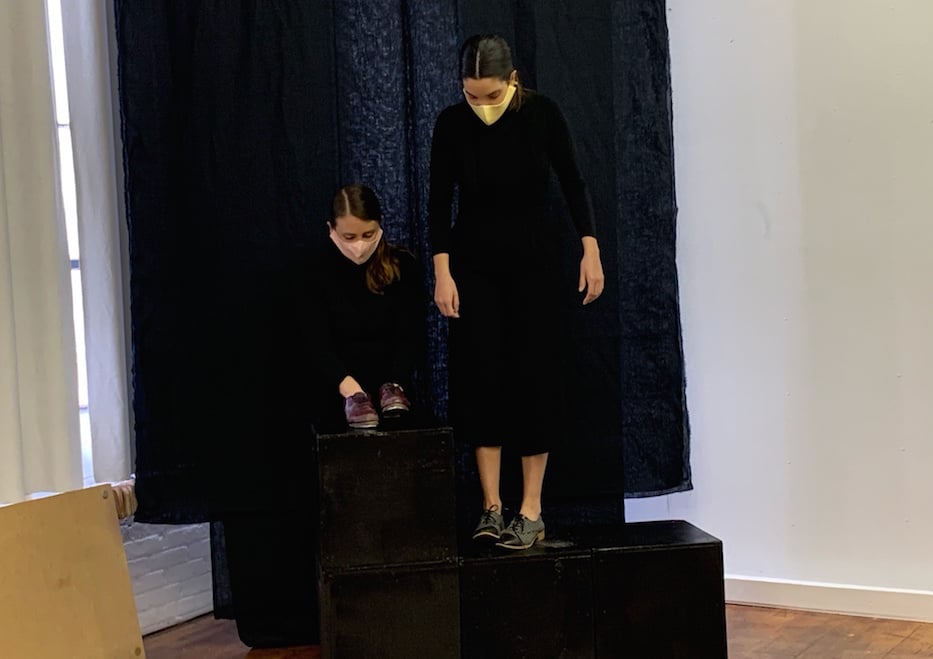 When Robbins introduced two brown, shiny tap shoes into the mix, Karnas swiveled her fingers dramatically to take in the sight. She swiveled again, just to make sure they were still there. In the studio audience members laughed gently, adding to a soundtrack composed of bodies, breath, and human voices. Some sat up a little straighter, keeping track of every movement. Karnas pulled on her own shoes, and mounted a box. Robbins watched her carefully, her feet still bare.

The two began a conversation, two unbound parts of the same whole. To Karnas’ tap-tapping footwork, Robbins stood several feet back, articulating movements with a leg swung forward, a hand lifted dramatically to her forehead. Karnas, in turn, made room for a rare, precise kind of slackness in her movements. She slowed and slid her feet, cautiously toe-tapped, and moved around the space until she and Robbins were face-to-face watching each other for the next move.

When Karnas tapped out a rhythm that sounded like a tango, Robbins responded with her whole body, shoulders and back loose. She ran one arm up the other, then whirled. When Karnas' footwork became harder and sparse, Robbins knelt on the ground, rolling forward on her knees.

The audience caught on: Robbins was synthesizing and distilling each movement. Or maybe more aptly, showing how it worked in direct, real-time translation. At times, the two dancers were a crisp reflection of each other. At others, a fun house mirror. Every so often, Karnas would speak, the sentences only fragments and open-ended questions.

In the final section of the piece, Robbins put her own tap shoes back on, experimenting as she slid, dragged, and lifted her feet across the boards and floor. They whispered, grateful, in return.

In so doing, the two showed how deeply—and poetically—the styles can and do lean on each other. In a talkback, both explained that the piece is still evolving. A section with moving boards, for instance, was only introduced last year, after the dancer Derick K. Grant saw a performance of the piece in February 2020 and suggested keeping part of the act that was specific to a venue.

For both dancers, it marked a slow return to dance performance 13 months into the pandemic, when the new normal means tiny audiences, live streaming, mask wearing, hand washing, and staying several feet apart. Sunday, individually bagged masks and hand sanitizer sat by the studio’s front door beside a neatly printed stack of programs. Attendees left their shoes in the hallway, padding into the space.

But at the end, it still felt whole. Maybe that is what coming back to the real world feels like—poetry, with one shoe on and one off. Figuring out how to bridge universes, one step at a time.