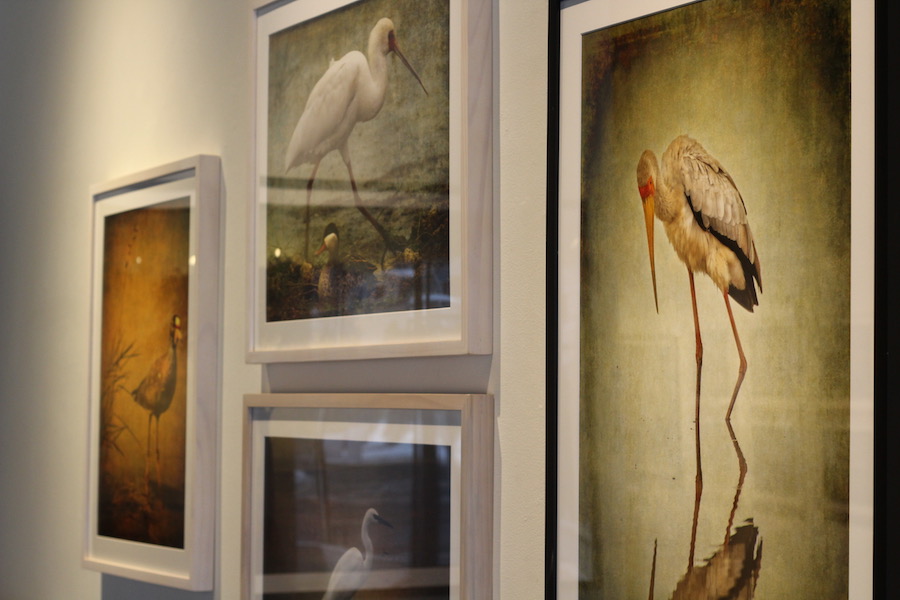 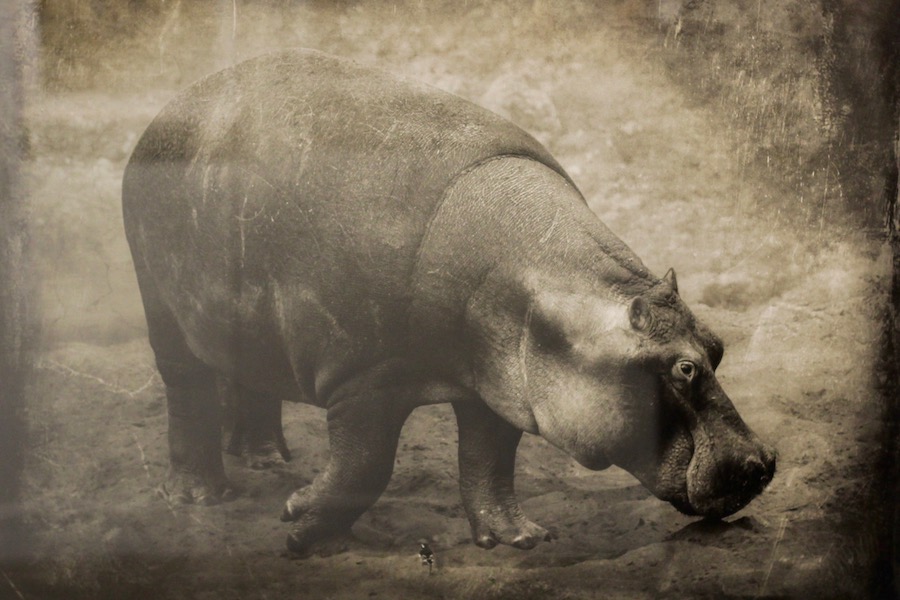 It’s the hippo, caught nudging a little mound in the sand, that asks for a closer look. Feet paw the ground as she lumbers forward. Her mouth turns up into a little, faint S shape. Nostrils flare out, ears prick forward. One eye swivels right at the camera. Between her two front legs, a bird stands completely still. They’re an odd couple, this mix of feathers and wrinkles frozen in a wash of sepia. And for a moment—or maybe two, or three—you forget that this thing could lob off a human head in seconds, pushed to the edge of laughter instead.

The hippo—with several fleets of wildebeest, flocks of bright birds, packs of cheetahs, and a long, trailing herd of elephants—comprises Vanishing: Volume Two, a collection of over 50 photographs from Penrhyn and Rod Cook running at Kehler Liddell Gallery through March 17. An opening reception and artists’ talk is scheduled for Sunday, Feb. 24.

Vanishing: Volume Two is the sequel show to Vanishing, the Cooks’ first look at climate change at Kehler Liddell two years ago. At that time, the two had returned from a 15-day safari in Kenya and Tanzania with thousands of photographs of East African wildlife and a new sense of urgency around how quickly climate change was moving. In September of 2017, the two published a book alongside their show at the gallery, chronicling what they had seen.

“We are not experts on the incredibly complex issues that threaten the region and can’t speak to what solutions, if any, there are to alleviate the situation,” they wrote at the time. “We can only attempt to visually represent what we saw and how we felt about it.”

Initially, the two recalled, that first safari was meant to be a singular, experience—among other reasons, it was too expensive for the two to repeat the same way again. But two days into that trip, Rod Cook recalled as he installed the second show, “we kind of looked at each other and said ‘we gotta come back.’” So they did, last summer, to document the migration of 1.5 million wildebeest across Northern Tanzania and into Kenya. The resulting 56 photos in the show are pulled from thousands taken in Amboseli National Park and Maasai Mara National Reserve in Kenya.

For the two, it was a second stage of a visceral reaction meeting a visual call-to-arms: they wanted to show not just majesty and natural wonder the universe had yet to lose, but to make the case for its preservation. When they arrived, they found their reasons for travel were almost too accurate: millions of wildebeest had stayed in Tanzania, because changing weather patterns meant that there was more for them to eat there. And the second time around, their labeling has taken a more grave, environmental tone, as if they are more comfortable staking their territory a second time around. 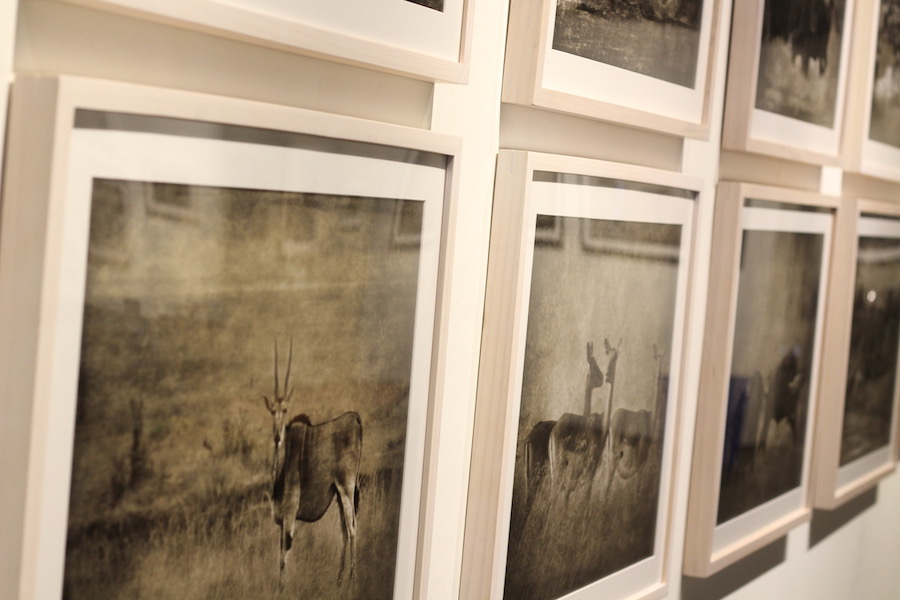 “Scientists predict that in 50 years time if we don’t spend more time thinking and acting differently in regards to conservation, species we know and love will be driven to extinction,” the two write in a label accompanying the exhibition. “If we continue to damage the planet at our current rate, humans could very well be one of those beloved species.”

“Thinking that we are somehow separate from the rest of the ecosystem is self destructive hubris of the first order,” it adds.

The setup is inherently complicated—it’s a show about conservation with a massive carbon footprint and price tag tacked onto the end of it. In East Africa, safari tourism is a major driver of job creation and economic development, but safari photographs scrub from the frame the bodies that make the tourism engine run, because they don’t fit into the narrative.

Indeed something feels uneasy here—the weight and idea of Africa without the continent’s full history, or a real sense of its present. We find ourselves asking: what is the greater truth behind these photographs? Do we need it to fully see what’s going on? Can we look without a colonialist lens, or will it always be there?

And yet, the images pull us in—partly because they defy that National Geographic-y impulse to classify and claim. Taken on two different operating systems (Rod Cook uses a Nikon and Penrhyn a Fuji; all images in the show are signed under the joint moniker PenRod), the photographs are moving and reverent, skillful and not without humor. Across the gallery, wildebeest kick up clouds of thick, hazy dust, giraffes walk in a single file line under a wide, low-hanging sky, gazelles look right at the camera before dashing off in another direction. A vivid suite of birds spread their plumes as if to say nice to know you and now get off my lawn.

The photographs show the work of two practitioners with an eye for action and sweet, soft sense of humor. In one, they’ve captured zebras in the heat of fighting (or is it mating?), one charging the other’s behind with his mouth wide open. In another photograph across the gallery, a gazelle springs across the frame as an elephant lumbers toward it, the click of the shutter almost audible as it freezes the moment.Or yet another, as teardrop-shaped droplets of water fall from a heron who primps and preens, watching its reflection intently.

In this universe—which is also ours to protect—there is also intense and surprising humanity. Towards the back of the gallery, a wall crowded with elephant photographs warrants a second look not for humbling size of the animals, so much as a photograph near the bottom. In it, 25 elephants walk in a long, methodical line, their bodies like a grey and leathery rope against this expansive landscape. From afar, we can see the different bodies—mothers with their calves, fathers in the front. The thought of losing even one of them is like a gut punch.

Throughout the show, the Cooks have experimented with color and layers of texture, from rice paper to scratches on the exposure to smudgy, aged vignettes that move in from the corners of the frame. In a suite of still-bright bird images, it’s given the work a painterly effect, the photographs reminiscent of John James Audubon’s illustrations. They, with their sepia neighbors, hang between past and present, the images weathered before their time, as if these subjects are historical remnants that died out over a century ago.

It’s a fun touch, until the impact hits you like a train: you’re not looking at a vestige of history yet. But that’s what it could be half a decade from now—or, perhaps, sooner—if humans don’t make real changes. Cook and Cook aren’t loud in their protest: while proceeds from an accompanying book go to the Big Life Foundation, there’s nothing pugnacious to confront the viewer who may arrive in an SUV, or hang onto their single-use plastic bags, or work for a nearby corporation that is fueling climate change. This, they seem to say with the images, will just be the side of the fight on which they fall.

What will be ours?