Vox Populi: What Brought Them To The Polls 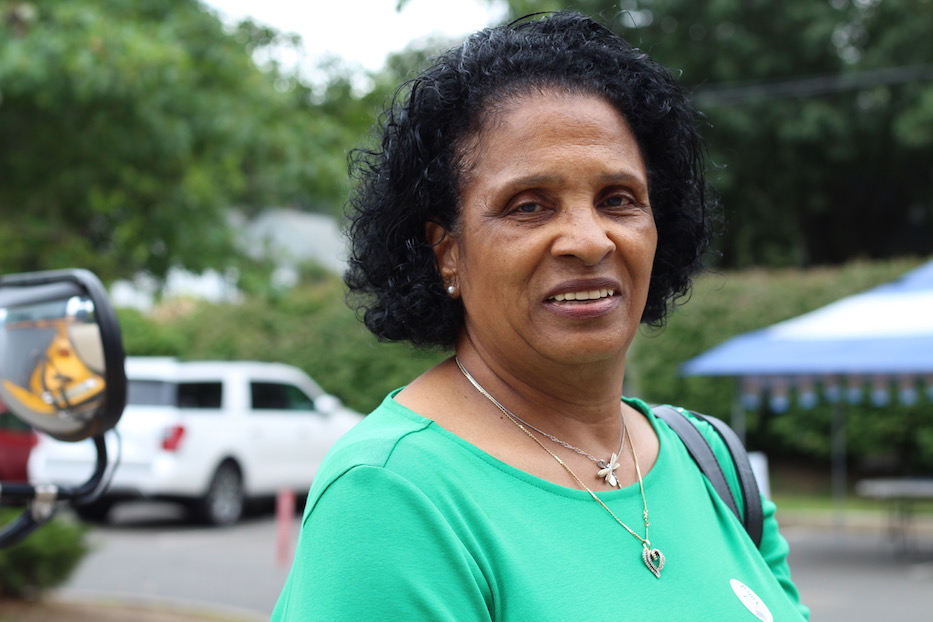 Mayoral hopeful Justin Elicker has won New Haven’s Democratic Mayoral Primary, sliding past incumbent Mayor Toni Harp in what has been seen by many as a referendum on her three terms as mayor of New Haven. Of 11,666 machine votes, he scored 6,825 of those and Harp collected 4,841. A remaining 591 absentee ballots had yet to be counted as of Tuesday night.

Before those results were announced, the Arts Paper spent the day talking to voters around New Haven about the issues that propelled them to the polls. Here is what some of them had to say. We’ll be back closer to November's Mayoral Election with specific conversations with artists.

I always vote—I know the results of voting—and I voted for Toni Harp. I see some people advertising that the mayor’s office is under inspection from the FBI, but that does not mean anything. You need to know the findings before you make a decision. Because somebody inspects you does not mean that you’re guilty.

I grew up in New York, and moved here in 1990. I’m a registered nurse and I’m still working [she is 74]. Healthcare is important to me because it is my field. Voting for Harp ... it was a no-brainer. 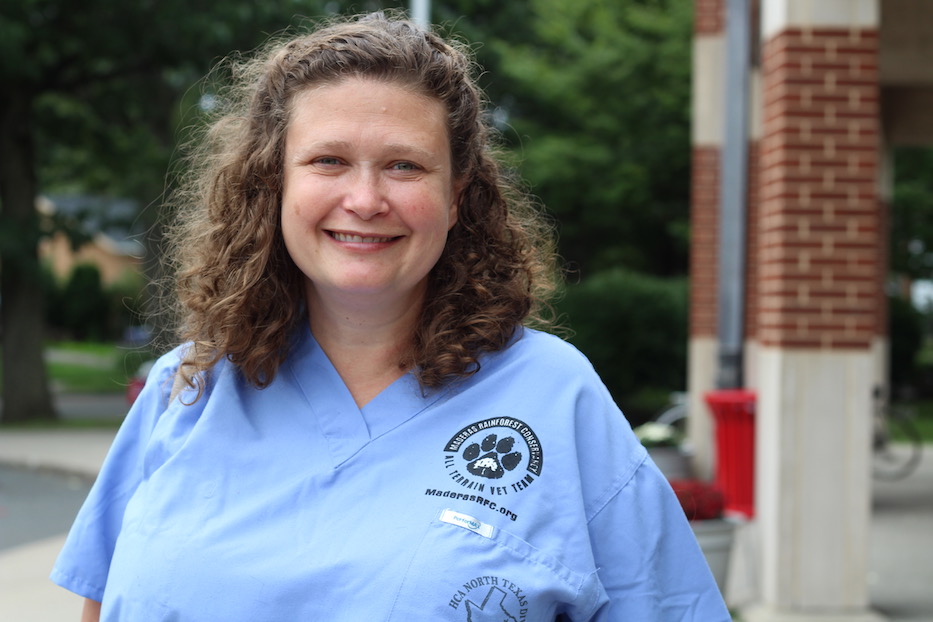 I can’t tell you [who I’m voting for]. I’m trying to think of things that are maybe influencing my decisions and maybe not. The Board of Education was a big issue.

You always worry -- New Haven is a fragile city. It does really well because of Yale, but things can change quickly with crime and taxes. And I think that one of the things that I worry about is that the taxes will get so high that people will no longer be able to afford it and they’ll flee to the suburbs. And then, you’ll start getting crime. 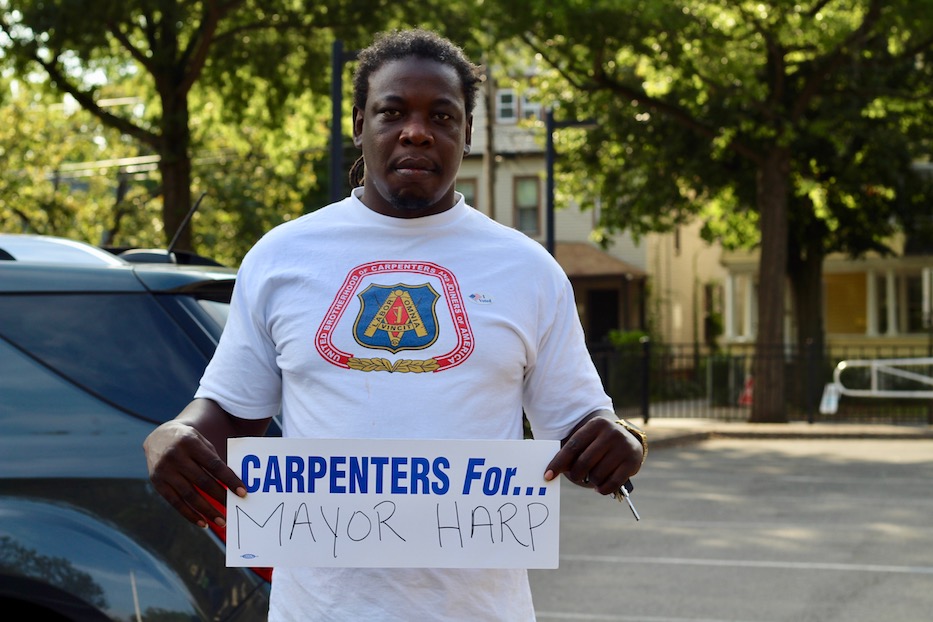 I’m third generation Newhallville. My grandfather, he worked at Pratt and Whitney. My uncles worked at Winchester. Voting for Mayor Harp—she agreed to help our community get jobs and she’s been doing that. I think she had a very successful six years. And I just wanted to keep it going. You know, everybody makes mistakes, but she’s a proven leader, and that’s what this race boils down to. Are we going to go with this person who has proven they can do it, or the guy who might be able to do it?

The culture [of the neighborhood] has shifted. We look at each other like brothers now, you know? Violence is down, and we want our kids to grow up in a community where they can thrive. I think the mayor did a great job of hiring qualified people to diversify the city. Just the culture of the community. I feel like it came back under Mayor Harp. We have community days, it’s all love. I just don’t want this neighborhood to be neglected again.

Justin’s a very nice guy. But even if he wanted to, he could not understand the social issues that we face, you know what I mean? I interviewed him four or five times, and he was always a gentleman, but this is the real thing. We don’t got time for somebody to learn how to be the mayor. He’s a good guy, but I want to go with the proven veteran. 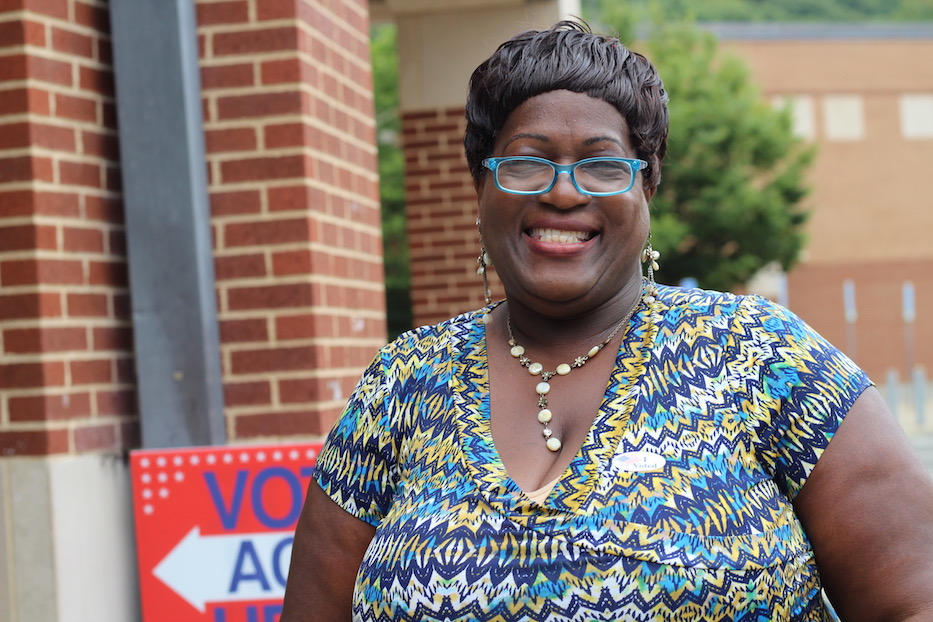 I grew up here, in the Ashmun Street high rise/low rise. In previous elections, I did vote for Toni Harp. But I voted for the new guy. We need changes. Changes for the young. We need more programs for the youth. We need more advocates for gun violence, police brutality, we just need a little bit more done. I just feel like with all the police brutality going on, there needs to be some kind of justification for the police that are doing it. Like, if they can make them more accountable for their action, like tapping into their pension when they cost the city a lot of money.

We need a change to keep the taxes down. I feel like we’re being taxed on every end. A lot of people are leaving the state of Connecticut, are losing their homes, just because of taxes. Like, you work all your life just to pay a mortgage, and you lose your home 30 years later because of taxes? I just feel that it’s unfair. We need to do more for consumers and for the people of Connecticut.

And I care about schools! When I was growing up, we was able to go to summer school, have summer jobs, even if it was six weeks. The CETA program was out here then. Our superintendent comes from another state and tries to act like she knows what is best for the state, and a lot of our students are suffering. I just feel like, people just need to be able to know that they can count on the state of Connecticut and they feel like they have little hope. I just try to keep hope alive. 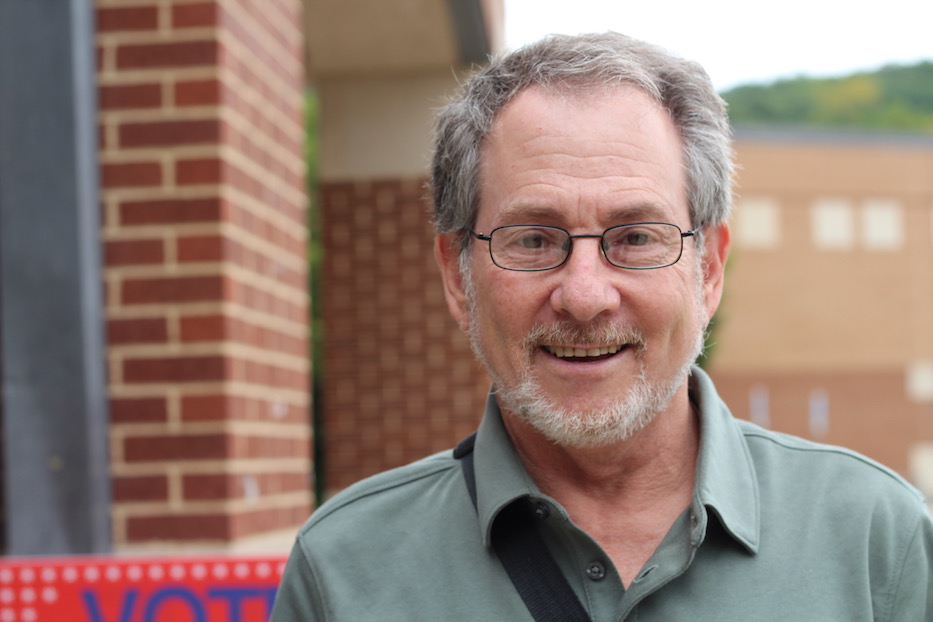 Now, he did just start ads that were sort of positive and about the education system. I agree with those. But if somebody wants to get in the ring and put on their boxing gloves and start swinging, you have to be willing to swing.

My concern is that whoever is advising him, they didn’t even have enough money to run one ad until last week. I actually sent an email that said “What Are You Waiting For?”

Education is definitely an important issue for me. I want to see it properly funded, and I don’t want to see any more deficits. I want to believe in the city government.

The neighborhoods have rebounded. There’s great efforts here in Newhallville [where Hilton lives and also votes], and so I’m very pleased with all the work that she’s done, from Public Works and the way the streets are kept to reduction of crime. I just, I’ve got her back.

She declined to be photographed.

I heard New Haven residents talk about being for or against both candidates, and just sort of summed up … most of them seemed to be leaning one way, and tried to go with that. I think Yale needs to be doing more for New Haven. Especially as a Yale student—if the town resents us, then that’s a problem, and they shouldn’t feel that way. And the government should be doing everything they can to equalize that.

I mean, I think we should be paying property taxes. I think it’s kind of always time for a change. It’s less about particular partnerships and the image of New Haven that Yale gives to students. It’s very much, it’s easy to see the city as other, to see the city as a dangerous place. The only thing we really hear about the city, about regular people in the city, is when someone gets shot or someone gets stabbed. And that’s a really, really skewed view. 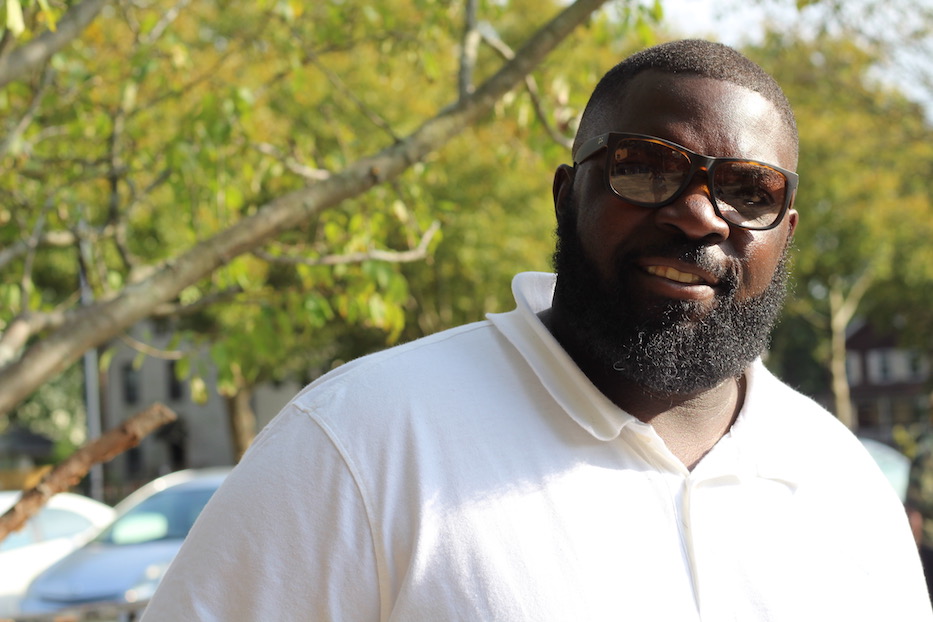 I’d prefer to leave who I voted for anonymous. But a lot of things were important to me, like the state of the city. I think Toni Harp has done a good job in the city, especially with education. I have four kids, at King/Robinson Interdistrict Magnet School. I was kind of happy with education since she took over. Before [under Mayor John DeStefano], I felt like it kind of stayed the same.

The neighborhood has changed a lot since she took over. It’s cleaner. Crime went down a lot, you know? I love what she did with the Q House. I’m excited to see it come back. I just want to see where everything goes. I think for some people, if she stays in office, it’ll be a good thing. Just to keep everything consistent, to keep it rolling. To see how far she can take it. 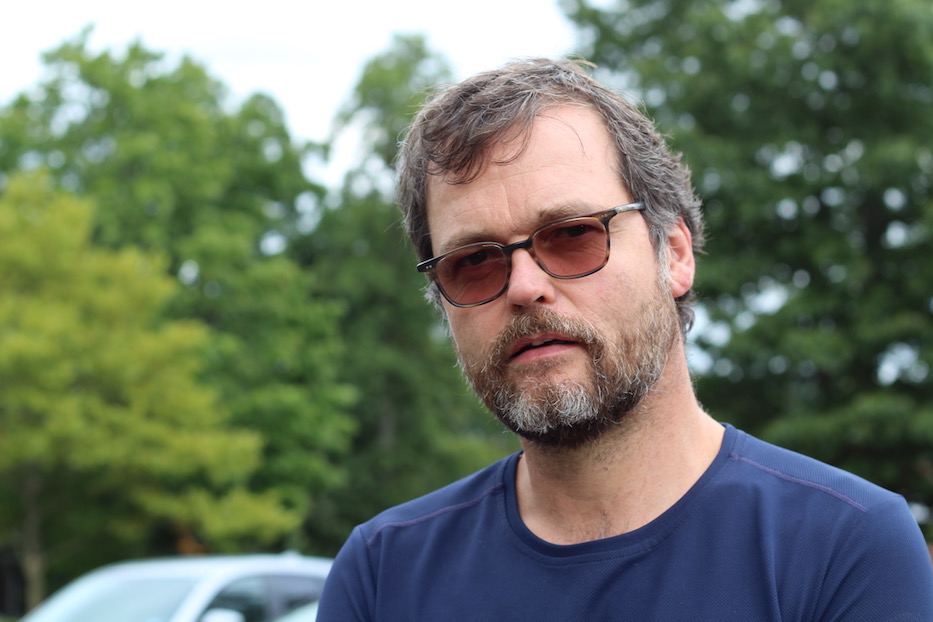 I voted for Justin Elicker. First, I’ve known Justin Elicker for such a long time—more than 10 years. And in fact, I supported him six years ago when he ran. I think the issues are taxes, finances, and the school system [his daughter is a student at Worthington Hooker School]. I’m mostly concerned in this election about the school system.

I grew up in New Haven most of my life, and I live in Newhallville. I voted for Toni Harp. I believe in everything she stands for. I believe in supporting women. I believe that all of us should vote, but I believe she’s the best candidate. She has a lot of experience under her belt, she also has a tremendous testimony of life, so it’s not just political experience but it is life experience. It’s about the struggles that we have, not only as New Haveners but as women in general.

I’m looking for her to make further history as the United States’ first Black female president. I believe in the financial wellbeing of the city. And I believe in diversity. We are seeing that come back to Newhallville as we have never seen it before. We have diversity in ethnicities, diversity in religious beliefs—it’s just becoming very diverse. And I don’t believe people would be coming into the neighborhood if it was such a hard place to be.

I’m seeing people purchasing homes in the area. There was a time when all you saw was African-Americans walking up and down the street, now I see Asians, I see caucasians, I see a diverse group of people that are moving into the neighborhood. Even the LGBT community. It’s an open place, and I believe that is because of Mayor Harp.