“We Will Rebuild It. Every Single Time.” 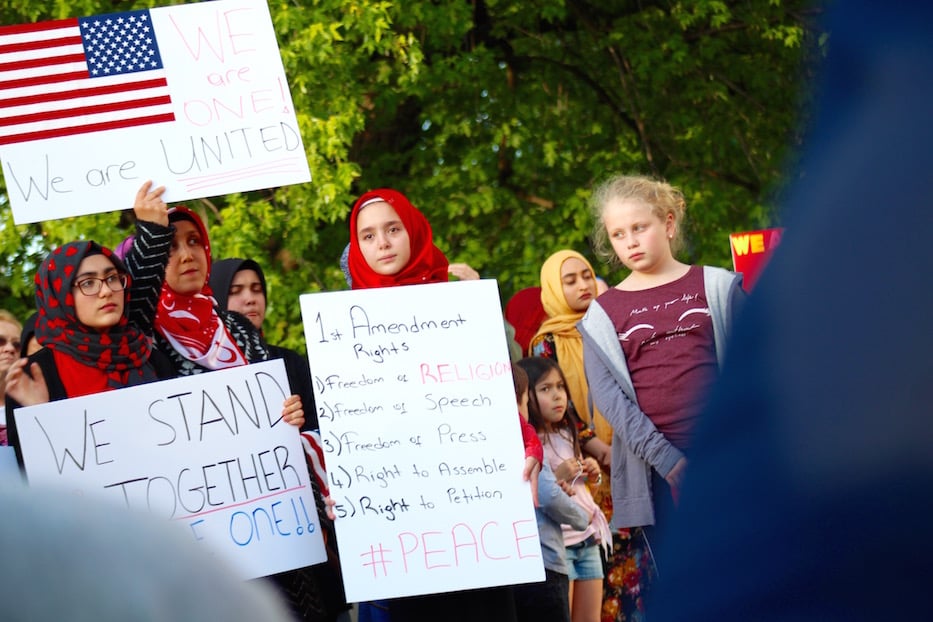 Some came in hijabs and tight-fitting taqiyahs, ready to end a long day of fasting with communal prayer. Others wore tallit and yarmulkes, or starched white collars and rainbow-printed stoles. At least one appeared ready to speak in a tightly knotted turban. But all of them had some version of the same message: hate has no home in New Haven, and it certainly has no home in a house of worship.

Hundreds of faith leaders, congregants, and community members brought that message to Diyanet Mosque Thursday evening, for a vigil and rallying cry four days after alleged arson damaged significant portions of the building Sunday afternoon. Over almost two hours, speakers wove multilingual, multi-demoninational prayer into a powerful call-to arms, calling on attendees to fight both Islamophobia and bigotry at large. One by one, they deplored the act of arson, committed during the Muslim holy month of Ramadan.

The vigil was organized by Fahd Syed, a community organizer with the Muslim Coalition of Connecticut (MCCC), and a number of other community partners. In addition to donation jars from the Connecticut Council in American-Islamic Relations (CAIR-CT), organizers referenced the nascent LaunchGood Campaign that has raised almost $150,000 in under a week. The campaign will remain online through June.

After opening the vigil with prayer and song from the Quran, a string of speakers called on attendees to stand in solidarity in the face of hate, and while the mosque begins to rebuild. Several paused momentarily to take stock of the crowd, where members of the mosque, some waving the Turkish flag, stood shoulder-to-shoulder with members of the city’s interfaith, activist, and political communities. 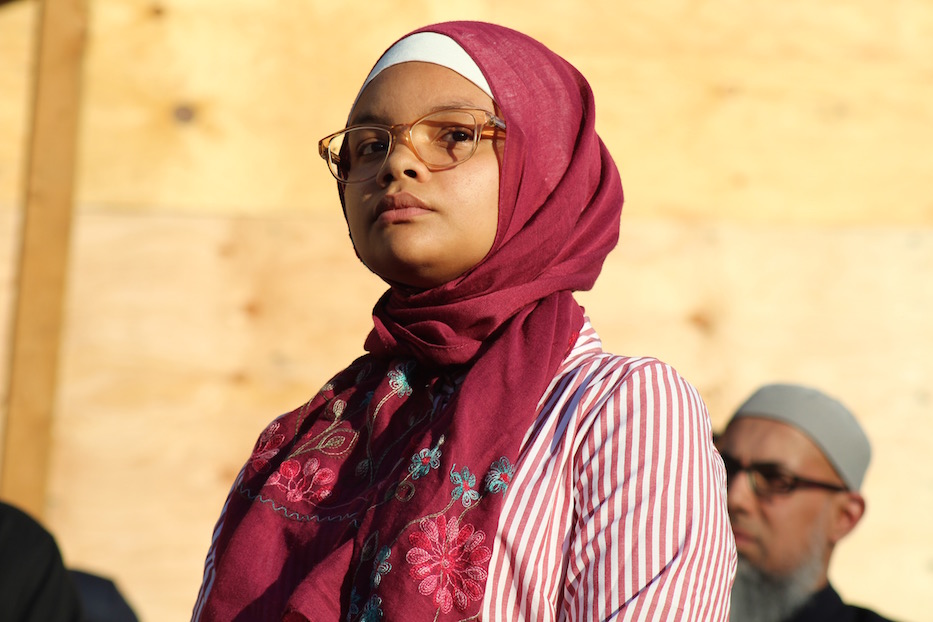 “Any time a place of worship is attacked, especially one frequented by marginalized people, it is a cause for alarm,” said Alicia Strong, a local activist and organizer who emceed the event. “This is a safe space. A community center. God’s house.”

The former executive director of CAIR-CT and a field organizer for U.S. Rep. Jahana Hayes, Strong described her feelings of devastation and terror after hearing that there had been a fire at the mosque—during the month of Ramadan—and that the fire had been intentional. 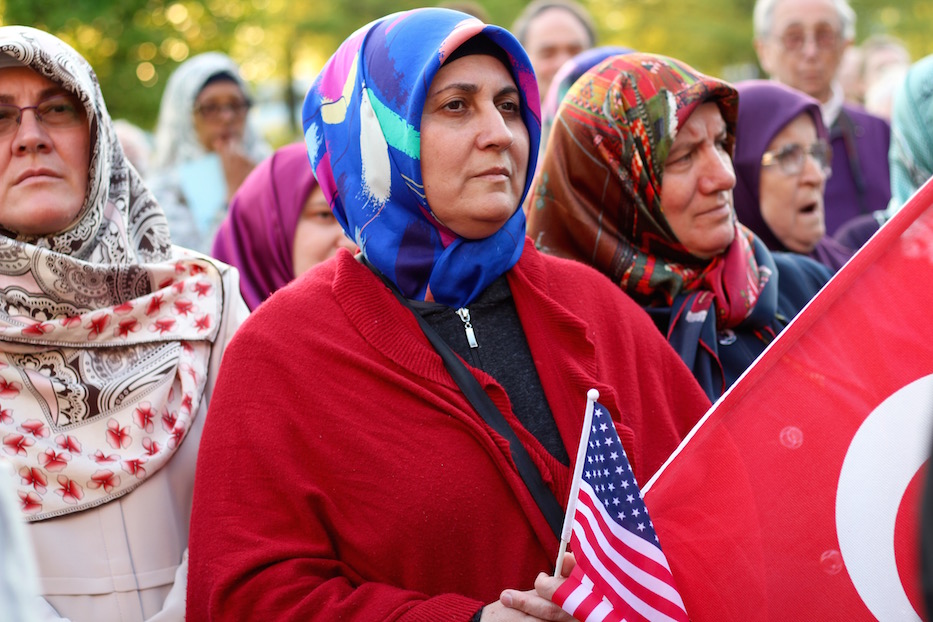 “So today we come together to speak to the perpetrator,” she continued. “You may have burned down this mosque. But if you burn down any mosque, synagogue or church in our community, we will rebuild it. Every. Single. Time.”

As she spoke, attendees continued to arrive. On one side of a half-moon that the crowd formed around the podium, a group of women and girls lifted up handmade signs that read We Are One/United and This Is Our Home. Another outlined First Amendment rights, with a big number one next to the words “Freedom of Religion.” Religion stood out in all caps, printed in red.

While several officials had traveled into the city for Thursday’s vigil, including from the Turkish Consulate in New York, some of the evening’s most galvanizing speeches came from the greater New Haven activist and faith community.

Greeting attendees with a warm "As-Salaam-Alaikum," Syed (pictured above) called the reason for gathering “unfortunate,” urging attendees to be vigilant in the face of growing white nationalism, and also to take their grief and anger as an opportunity to get to know the local Muslim community. He decried attacks on places of worship, adding synagogues, churches and schools to his list. For him, he added, the only solution is to band together.

“Our pain is your pain,” he said. “We must continue to overcome and defeat hate. When we have events like ‘Sharing Ramadan’ in this blessed month of Ramadan, or events for our Jewish or Christian brothers and sisters, [we] come together. This is how we will defeat hate … our struggle is one struggle.”

Saifuddin Hasaan, assistant Imam at the Masjid Al-Islam on George Street, returned to scripture. He invoked the teachings of the Prophet Muhammad, which instruct Muslims to not only identify evil in the world, but to “change it with your hands” and speak out against it vocally. He called on attendees to rally not just against Islamophobia but also bigotry and anti-Semitism, because they will only beat those ills as a united front. 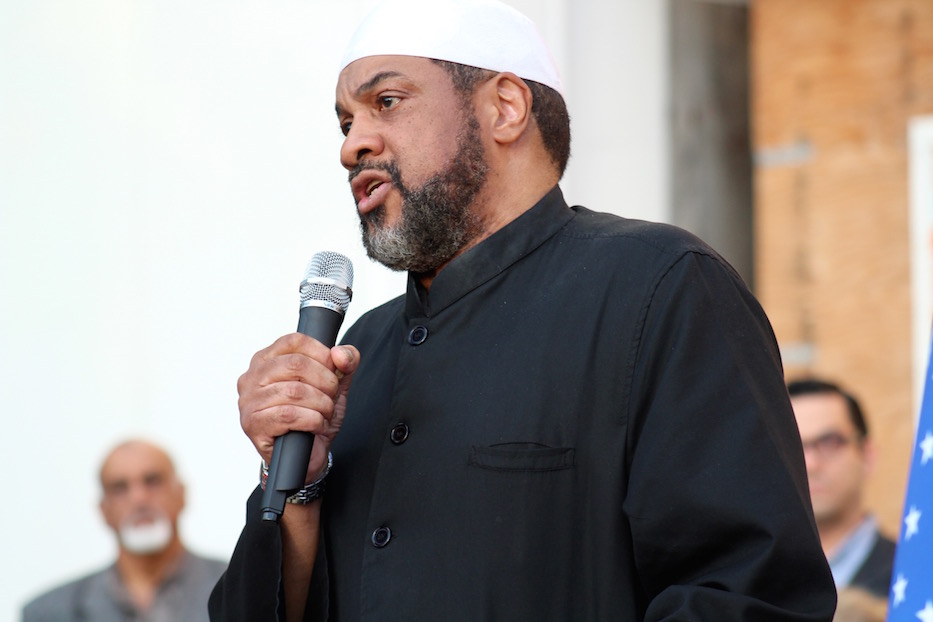 “We have to understand we are one human family,” he said, switching between English and Arabic as he recited verses from the Quran. “Oh mankind, you’re all created from a single pair of a male and a female Adam and Eve, and been made into nations and tribes that you may get to know each other and not hate each other!” 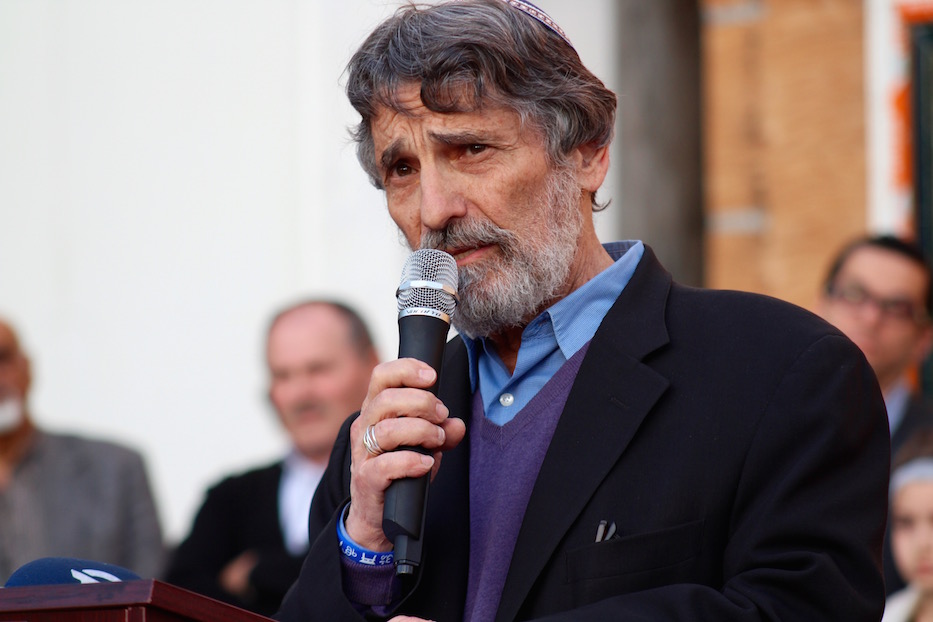 Rabbi Herbert Brockman told the crowd that his heart broke looking at the mosque, because he was not able to physically enter the space. He too went back to scripture, digging into the book of Exodus, where God commands the Jews to build a sanctuary. Brockman outlined two translations of a passage. In one, God lives among the Jewish people. In another, he is inside them.

“I am reminded that that mosque today is in each one of us,” he said. “We are the mosque. We are the house that God is visiting. And that gives me hope.”

Rev. Bonita Grubbs told the crowd that the fire was a personal matter. While she may be best known in her role at Christian Community Action, she is also a neighbor to the mosque, which is just up a few blocks away from where she lives.

She’d spent some of Sunday afternoon in a state of disbelief after hearing fire trucks race through the neighborhood and learning why traffic had been blocked off and diverted. Instead of staying inside her house, she walked to the mosque to see it for herself.

“I wanted to think more deeply,” she said. “How could it be that my neighbors, faithful people, worshipping Ramadan, would be such a target? Why would they have to join the list of other worship centers that had the same horrific experience? Why is it that this mosque was a victim of such violence?”

Four days later, she said, she was returning to the mosque as a witness. As she spoke, she pledged her support for both displaced congregants and New Haven’s Muslim community more broadly

“It’s important to stand at a time of tragedy,” she said. “I hope to walk here again, just a few blocks down the street, to celebrate this mosque after its rebuilding.” 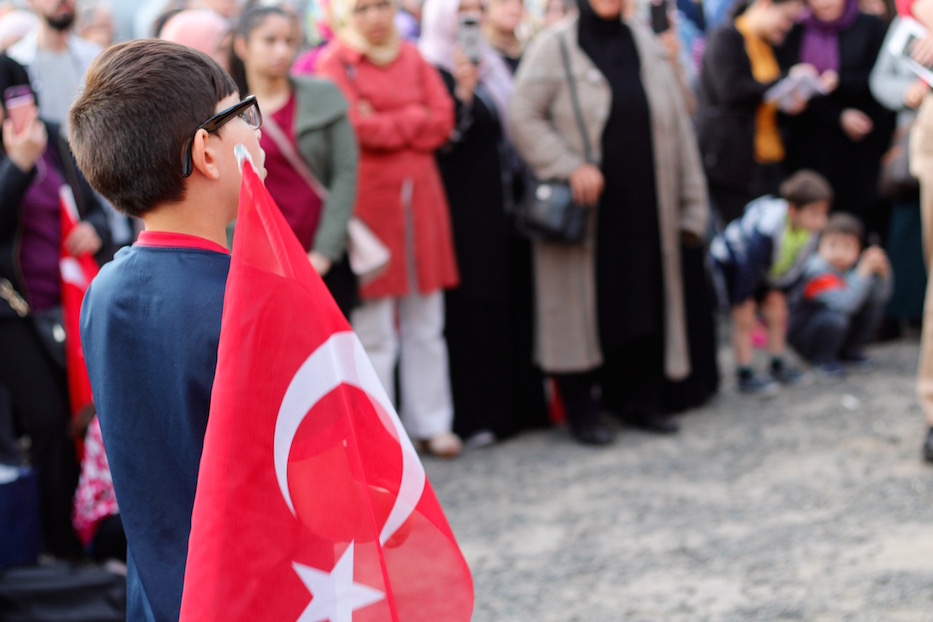 Part of the vigil also looked to the mosque’s future, and legislative and municipal action that may protect Muslims against bigotry and hate crime in the weeks, months and years to come. Joshua Perry, special counsel for civil rights with the office of Attorney General William Tong, pledged Tong’s support for the community and for the city in the coming year. 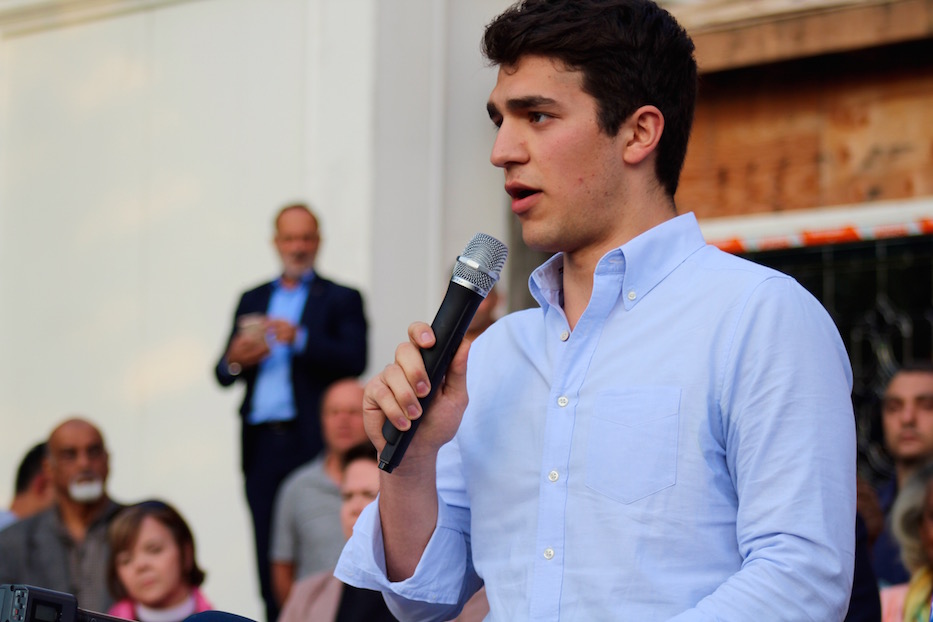 He added that the fire hits close to home. While he and his family now attend a mosque in West Haven, he grew up going to Diyanet as a kid, when it was in a different building nearby. It was where his parents got married, where he took classes and attended Friday prayers. He still has a spiritual family in the mosque, he said in a short interview before Thursday's lineup.

“While I’m not arguing that a minaret or holiday would have stopped Sunday’s fire from happening, I am highlighting our city’s and leaders’ persistent indifference toward Muslim lives in America,” he said, reading from a Facebook post he wrote earlier this week. “We need to sit down and have a discussion about political representation in Connecticut, in this country, and at large.”

To watch more from the vigil, click on the video below.