Kinship As An Indigenous Climate Solution 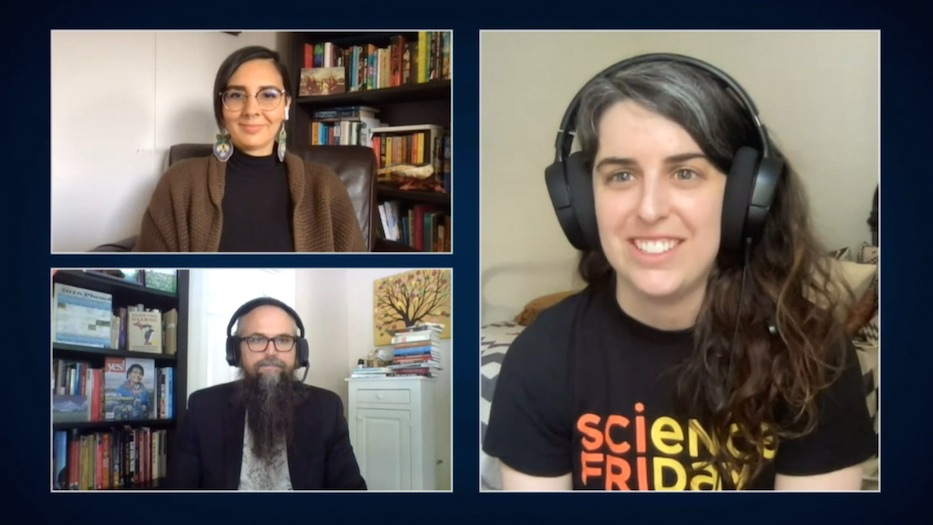 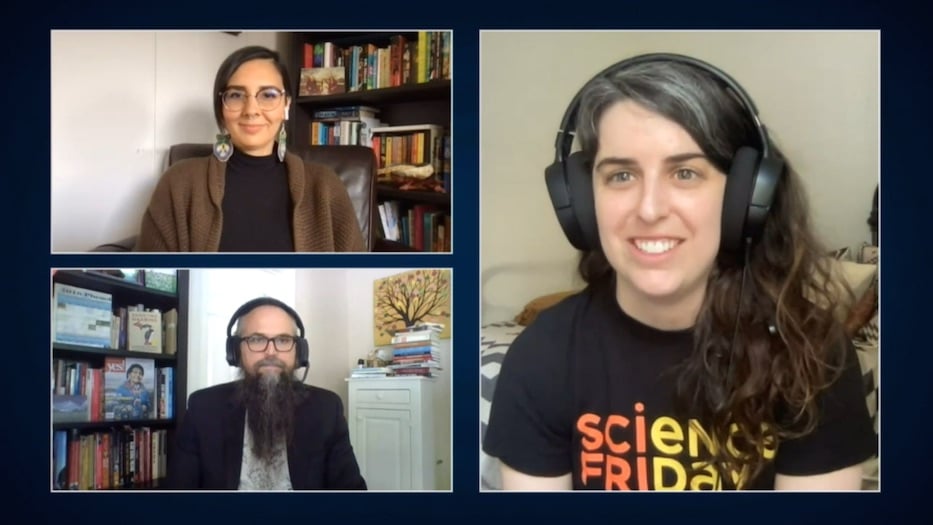 In Canada, the Alberta tar sands are upstream from Eriel Deranger’s home community, the Athabasca Chipewyan First Nation. Under Canada’s Impact Benefit Agreement process, written to get corporations and the First Nations peoples to “determine” what benefit the developers bring to them, private developers dug and filled a man-made “compensation lake” filled with displaced fish. They called it the “benefit” for this extractive project.

Deranger doesn’t see it as a benefit. She's not sure who does.

Wednesday afternoon, Deranger brought that anecdote to “Listening to Earth: Indigenous Wisdom and Climate Futures,” a panel discussion through the International Festival of Arts & Ideas. Hosted by Science Friday’s Diana Montano, the panel featured Deranger, a member of the Athabasca Chipewyan First Nation and executive director and co-founder of Indigenous Climate Action, and University of Michigan Professor Kyle Whyte. Whyte is a member of the Citizen Potawatomi Nation and professor of environment and sustainability.

Both she and Whyte noted that it goes back to the history and erasure of Native narratives—and what it looks like to restore those. As Whyte sees it, non-natives have been made to feel that their knowledge of climate change mattered. In fact, they’ve gone out of their way to ignore or overlook centuries of intimate Native knowledge. Native people aren’t listened to, despite the science of climate science being “one of the oldest sciences that there is” for them.

He pointed to how scientists have sometimes ignored the findings from Native communities on their own environments, determining climate impacts only through what they find in their scientific research. He said they value their Western academic approaches over Indigenous knowledge and approaches.

Deranger said that much of the time, Indigenous people are not empowered in feeling that their knowledge is relevant to the conversations about climate solutions. She said that there is often a focus on greenhouse gas emissions and Western science.

When people shift the conservation from emissions to biodiversity and environmental preservation, Native communities are able to relate more and come up with solutions, she said. Those operate outside of the colonial perspective of what climate solutions are—they become connected to their place, culture, identity, and community as a whole.

“There is a great emphasis on what it means to be in good relationships—relationships with qualities like consent, trust, reciprocity, accountability, transparency… and protecting certain things that are sacred,” Whyte said of the tribes that he has connected with.

Unfortunately, Deranger added, interactions that outside organizations have with these tribes often do not uphold the same values. She pointed to the tokenizing and minimizing of input of Indigenous communities in Canada through consultations by white-led environmental non-governmental organizations (NGOs).

She said that consulting with Indigenous peoples is crucial in climate solutions—but these consultations with Indigenous communities must be ethical and uphold trust and reciprocity. She pointed to prior and informed consent, free from fear or intimidation, as a need in these conversations.

She said she believes that climate activists and environmentalists can’t reduce the climate crisis to the reduction of emissions—they must address the root causes that got them to there, and face the fact that colonization brought with it racism, patriarchy, attempted genocide, and more. Climate change is not just about factories and cars producing greenhouse gas emissions, she said.

“It has to do with state and colonial violence and the appropriation of our lands and territories for those industries that are producing greenhouse gas emissions, and you start to see those correlations between colonization and climate disaster,” she said.

Whyte said that environmentalists must also feel an urgency towards building kinship and focusing on creating a consensual system as a means for environmental and climate justice. He said the current U.S. system does not have the relationships or institutional set-ups for investments to go anywhere but to the privileged. By focusing solely on drawing down emissions, environmentalists ignore the severe lack of kinship, causing oppressed communities to face continuous vulnerability to climate impacts.

“When your urgency is only driven by climate change mitigation, why isn’t your urgency also driven by a need to repair bonds among people and prepare the grounds for justice and equity?” he said. “That has to come in with equal importance as the goal of mitigating climate change.”

The conversation ended with a call for implementing new-old climate solutions. Deranger explained that people in the climate justice movement do not talk enough about the demonization and devaluing of Indigenous cultures. Often, she said, the ways Indigenous peoples approach climate solutions are still looked at as “barbaric.”

“It’s also climate justice when we talk about those that are challenging the sustainable solutions," she said. "Those solutions are still rooted in those foundations that have dispossessed us of our land, see us as less, and still demonize us and vilify us as criminals in our own lands and territories where we don’t have a say."

To view a schedule of events for the International Festival of Arts & Ideas, click here.