Why 'Cry It Out' Is More Than Mama Drama 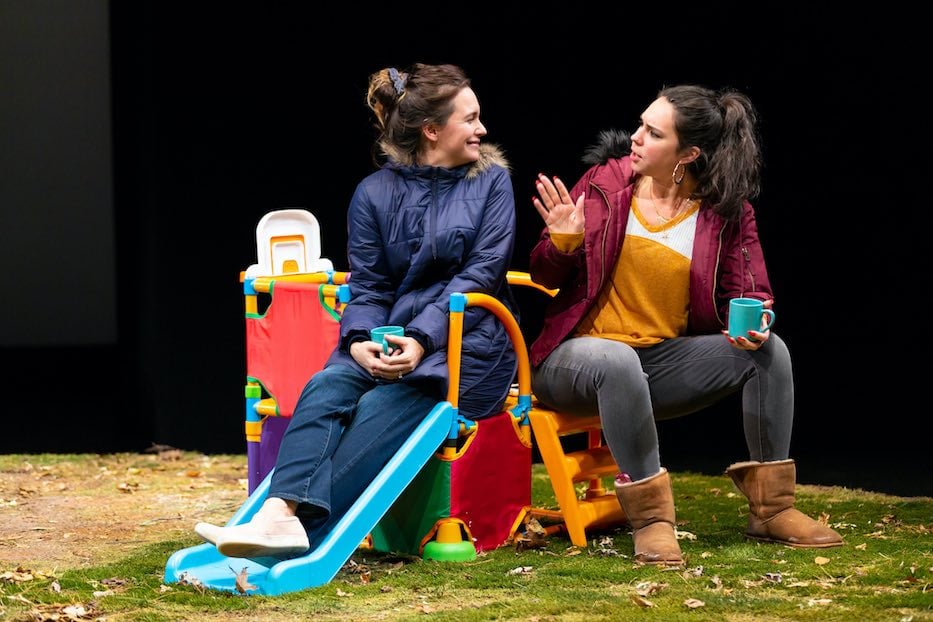 Two women sit in a yard, egg-blue cups of coffee cradled in their hands. The morning is fresh and damp around them; their newborns sleep on nearby monitors. A bright playset heaves beneath their weight, comically small and glistening in the light. This is where whole pedestrian histories can start, it seems, with the grass still wet and two steaming mugs of grocery store coffee held out like peace offerings.

And then the stillness breaks. Somewhere offstage, a baby starts to fuss, and the two rush to a monitor to see what’s going on. Their muscles tense up. Breath quickens. When he calms himself back to sleep, their whole bodies relax. In the audience, ours do too.

Director Rachel Alderman has cracked something open with Cry It Out, Molly Smith Metzler’s 2017 parenting drama now at Hartford Stage. The play, a bracingly funny and candid look at the first weeks and months of postpartum, runs through Nov. 17. Tickets and more information are available here.

Set outside New York City in the real-life town of Port Washington, New York, Cry It Out tells the story of new moms Lina (Evelyn Spahr) and Jessie (Rachel Spencer Hewitt), neighbors who become unlikely friends during the breast-aching, nipple-skin-peeling, self-wetting, kegel-exercise-performing, spit-up-cleaning, sleep-deprived period referred to as the fourth trimester of pregnancy.

As the two grow closer, they also meet new dad Mitchell (Erin Gann), the uber-rich owner of a startup who is convinced that his wife Adrienne (Caroline Kinsolving) has been replaced by a cold-hearted alien after giving birth to their first child. Because, you know, that must be the answer for a woman who wants to get right back to her highly competitive job after subjecting her body to grueling IVF treatments and then pushing a bowling ball out of her vagina.

The title is a double entendre: while “cry it out” refers to a controversial method of sleep training in which parents let a baby cry themselves back to sleep, it’s abundantly clear from the moment these bodies connect on stage that they may need to cry it out just as badly. 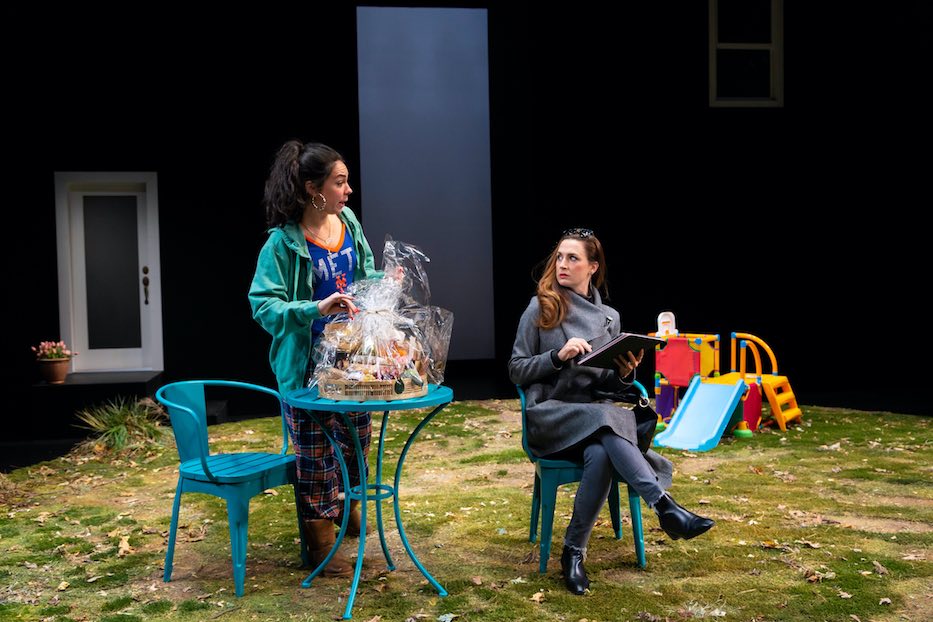 What makes the drama worth watching is how exactly they all do it, whether by choice or by force. After rushing Lina in Stop & Shop (“I hurdle-jumped over the cantaloupe,” she exclaims), Jessie seems determined to make this friendship work, venturing into unknown territory with open arms and a body that’s still healing from an emergency C-Section. The two have immediate chemistry, navigating economic differences through baby monitors, stretchy legwear (a nod to costume designer Blair Gulledge), maternity leave policies, health insurance, and childcare options.

The more they learn about each other—and the tiny humans in their lives—the more they learn about a system that’s stacked against parents and particularly moms. Metzler makes clear its cruel machinations: mere months of maternity leave that is often unpaid, social stigma that surrounds mothers who want to stay home and those who can’t even if they want to, the clear limits of one’s village and sheer economic strain of raising a human.

The magic is that it bursts open the myth of beatific motherhood for the complicated, loveable and totally taboo mess that it is. Where social media has made the performance of maternity into some modern day Renoir-esque hell—at the time of publication of this article, there were 18,091,740 blissful images hashtagged #motherhood on Instagram and all of them were probably a lie—Metzler gives an unvarnished look.

Jessie and Lina check their butts to make sure they haven’t peed themselves. They joke about hospital underwear and maternity jeans. They compare notes on birth experiences, including a harrowing “splash and slash” emergency C-Section (which, like "geriatric pregnancy" and the entire gynecological establishment, seems like a term created by people without vaginas) in which Jessie and the baby nearly died. When Jessie’s daughter Allison starts teething, they’re real about the fact that babies gnaw on their boobs. And speaking of those, Jessie whips one out on stage, fully aware that Mitchell and Adrienne can see it from the telescope they keep outside their home (“not for watching you, for bird-watching,” Mitchell insists) and so close to the end of her rope she no longer cares.

In this way, Hartford Stage has entered an inherently political conversation without ever needing to say the words “maternal mortality” or “paid family and medical leave.” It’s not a singular glimmer—Friends did some postpartum truth-telling when a character referred to maternity leave as a “baby vacation,” and the current shows The Letdown and Workin’ Moms have showed postpartum depression, breast pumping, unreliable post-pregnancy menstruation on television—but a rare one, rarer still for the stage.

In her staging of the show, Alderman inserts herself firmly into a world that does not want to talk about the realities of having a baby in a country where it is still inconceivably, mind-numbingly dangerous to do so. She mines the characters for comedy but also for their depth, exploring a world in which no one is wrong and no one is evil, but all of them are victims of a very real internalized patriarchy that lasts well after the lights have gone down. 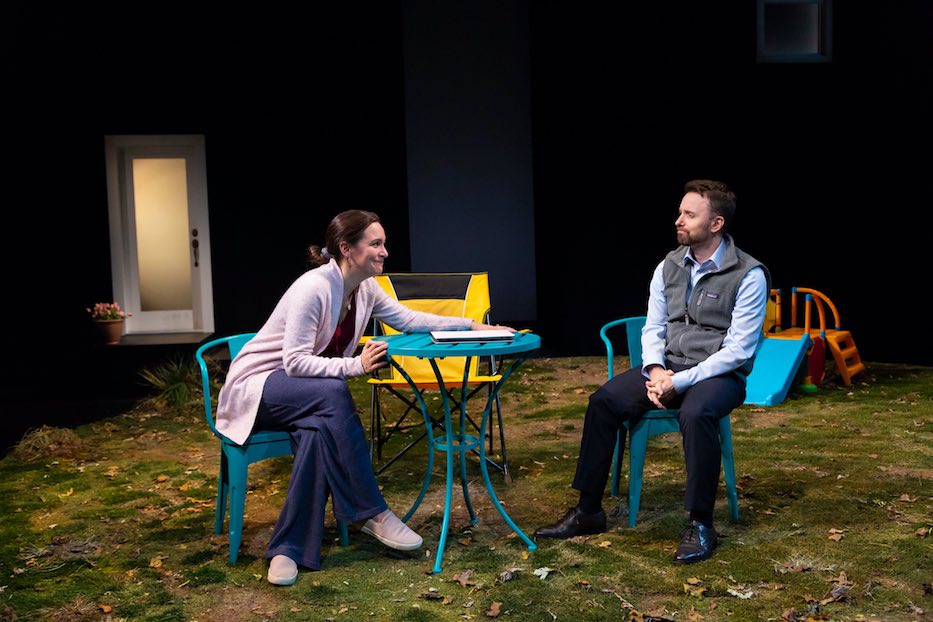 Set designer Kristen Robinson has given her the right playground to do so: a round island of yard that sits between two condos in and out of which Jessie and Lina rotate. It feels compact but not claustrophobic, big enough to hold their friendship but too small for the system that threatens to break them (not unlike, in fact, that playset that they struggle to fit on in the opening scene).

As characters burst into this world, often with great emotion and little sleep, they bring it very much to life. As Lina, Spahr has channeled an inner Long Islander, bitingly funny but never to the point of caricature. She inhabits a world that so many mothers (and, surely, caregivers, guardians, godparents, siblings and aunts and uncles) can identify with: she’s barely holding it together, one job loss or family child care cancellation away from financial precariousness. When the bottom falls—and we know it will, because America—it threatens to come crashing down. And yet, she would move heaven and earth for her son, and does when it comes to that.

Across from her, Hewitt brings a verve and polish that chips away just so, unraveling as her character becomes desperate to stay at home at all costs (literally), and realizes exactly what she’s up against. It’s a smart device for showing the sharp teeth of the corporate world as they threaten to chew her up, and one that Hewitt (who is the real-life director of the Parent Artist Advocacy League) embraces fully. When she brings Allison out on stage in a sling, something clicks for her and for the audience completely: that this thing has changed her life irrevocably, and a world that was once rooting for her to pull ahead is now going to make her decide at every turn.

While their friendship is the heartbeat of this show, Gann and Kinsolving seem to be the shock paddles, jolting the audience fully into being just when they think they’ve learned everything there is to learn. Kinsolving, who sweeps onto the stage like every Hollywood she-villain ever, brings delicious humor and complexity to the role. Against her, Gann exposes the system for exactly what it is—a big old sham. While he seems most dangerous when the audience meets him in a business suit, it’s a foil: it turns out that the play is most unfair when he’s in jeans and a Yankees shirt, unaware of the system of which he has taken advantage.

This Cry It Out is not the be-all-end-all play about parenthood—there are no single parents or gay parents, trans bodies are not part of this parenting equation, and Alderman’s cast is completely white—but it doesn’t try to be either. The script’s subtext extends to a reality that many parents face across the country: America seems to love a child from the moment it is conceived to the moment it leaves the womb. Then, parents are left to the grinding machine of late-stage capitalism.

If it doesn’t feel timely, audience members should double check their reproductive organs and also the news. In the U.S., NPR has reported that over half a million women suffer from complications from pregnancy and childbirth annually, in addition to the nearly 1,000 who never leave the hospital. While employers are legally required to give 12 weeks of leave—if they employ more than 50 people—those weeks don't have to come with pay, and vary wildly for smaller businesses, companies, and nonprofits. There’s also no good method of enforcement, which has recently resulted in a series of discrimination lawsuits against employers one might expect (Walmart, Amazon) and those one might not (Planned Parenthood).

More than three decades after Dr. Richard Ferber popularized “cry it out” and almost two after Ann Crittenden published The Price of Motherhood, it feels like little has changed. But the play makes a bold statement: there’s definitely another way. In Alderman’s hands, the answer is to burn it all down. While the message may be cosmically way past its due date, the subtle punch it packs feels right on time.