Elm City Montessori Sings On Through The Pandemic 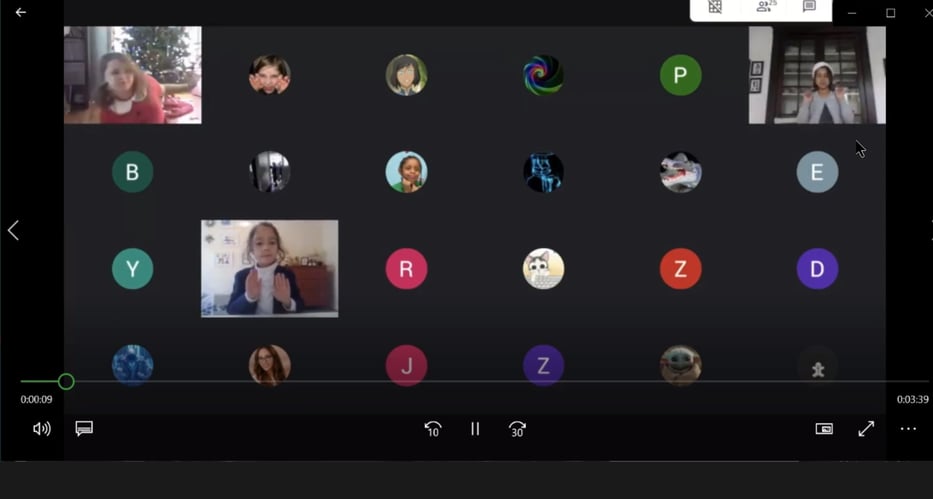 Students from the Chestnut Class Perform "I Just Called To Say I Love You" as part of Elm City Montessori School's virtual Winter Sing.

One by one, 20 black boxes on Google Hangouts lit up and started flickering. Students from the Chestnut class danced and lip-synced to Stevie Wonder’s winter classic, “I Just Called to Say I Love You.” One student cartwheeled across her room. Another danced on top of her parent’s shoulders. Some sang fully melted into their living room couches.

The performance was one of a dozen by Elm City Montessori School students and faculty as part of the school’s annual Winter Sing. The song selection ranged from holiday classics—“Jingle Bells” and “8 Days of Hannukkah” by Sharon Jones & The Dap-Kings—to the more meditative “We the Children want Peace / Los Niños Queremos la Paz.” Over 180 participants tuned into the private Zoom performance, with an estimated 500 parents and family members and 259 students in attendance.

Parents were the ones to keep the tradition going, said Principal Julia Webb. Despite having the option to cancel the event, members of the Family Teacher Organization (FTO) approached school administrators to continue the event. At the time, the school did not have a plan in place for the sing along, but wanted to retain as many of its traditions as possible.

“If our families and our children want to do something, we really want to think about how we make that happen,” Webb said. “It is so important emotionally for our learners and families and the staff to feel like that there are things that are solid and true and steady that remain and then there are places for us to love and connect with one another.” 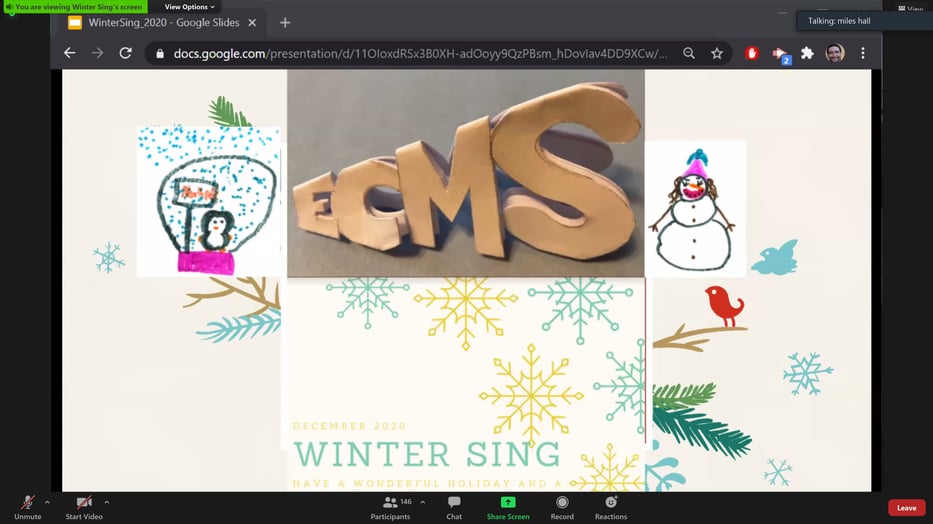 Screen shot of the welcome slide. All of the artwork throughout the event was made by students.

To mirror the in-person experience, each class still had live emcees to introduce their fellow classmates and offer a land acknowledgement. The FTO even provided goodie bags filled with popcorn, candy canes, and hot chocolate for students to enjoy during the performance, just as they would have in person.

The school’s youngest Maple Class (Pre-K through kindergarten) opened the night with “Lava” by Kuana Torres Kahele and Nāpua Greig. Before Thursday, teacher Neslin Iyilikci had stitched together videos of each student reciting the lyrics , resulting in one slightly chaotic but endearing video. Students had the option to record during class or record themselves on Flipgrid, explained Iyilikci. The students were the ones who came up with the idea to take turns singing.

“I have one child, one of our youngest, who didn't want to unmute and share during our meetings,”Iyilikci said. “After I shared their recorded performance with the group, they were so excited and adored that we heard that child's voice for the first time. She recorded herself on video and sang a part of the song, and we added her to the group video.”

Music and singing have a special place at ECMS and other Montessori schools, said Webb. Students sing daily as part of their circle discussion, and sometimes sing cleaning up or between classes. Singing is so central to the school that Winter Sing is the school’s largest event with more than 300 people attending. In other words, it’s like a Montessori Homecoming game.

“It’s also a really authentic way of being together, and being connected to one another and also kind of finding a way to be in your body and yourself,” Webb said.

Coordinating the school’s 259 students to record their songs ahead of time was a challenge, said magnet resource teacher David Weinreb. In the process, both teachers and students doubled down on their tech skills to make each class' desired performance come to life. Unexpectedly, the students became even more dedicated to the performance.

“Some of these classes recorded so many times to get it right and to do it better, and that is an interesting thing,” he said. “Students were saying, ‘we can do better one more time, one more time.’ Because you couldn't do that a year ago you just had to perform [once] ... no matter what.” 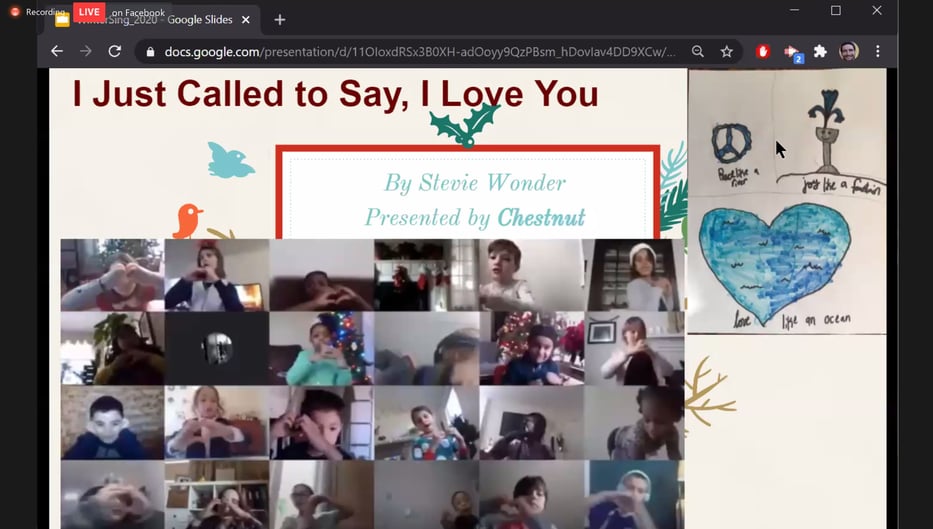 A screenshot of students performing "I Just Called to Say I Love You" by Stevie Wonder. Google Hangouts.

Even the delays in the program or the technical glitches felt natural, said Tanya Colon. At one point, a student drew red lines across the entire screen followed by a moment of silence.

“It kind of just puts that natural aspect into it that you know we are still humans and regardless if we're in virtual or not little hiccups are going to happen and you just keep going and it just makes it part of the experience,” she said.

She and her son Paul, a second grader at the school, danced and sang to the music from their living room. Although the performance was pre-recorded, Paul still sang all the words to “Peace Like a River/ Tengo Paz Como un Río.” Not all the students at the school speak Spanish, but were taught their lines phonetically for the song.

“Everyone has such amazing voices. It's like a choir, I mean even when the teachers were singing,” Colon said. “It was like oh my god you hear voices and you're like oh my gosh I would have never thought that that person sang so well.”

At one point during the Chestnut classes’ recorded performance, student Haviland Hawthorne jumped off screen. She later said that she doesn’t like people watching her sing, but still wanted to do the event. She wanted to see what a virtual event could look like. Her mother, Tasha Hawthorne, teared up watching the performances.

“It is sweet but it is also nice to see kids evolving and growing in positive ways,” she said. “Being able to do all the things they weren’t able to do is a pretty remarkable thing.”

Staff at ECMS perform "Light a Candle for Peace," by Shelley Murley. Provided by David Weinreb.

Emcee and fourth grader Logan Roberts never doubted the performance was going to happen. “We’re going to do it anyway,” he said. Students and teachers working together have courage.”

The night concluded with the school’s staff rendition of "Light a Candle for Peace" by Shelley Murley.