Designer Neville Wisdom has finally funked up the Yale Center for British Art (YCBA). And if a series of tightly knitted grey-and-black contrasts, black swags on red silk, and sweeping fleece staircases are any indication, he’s just getting started.

That was the takeaway Friday night, as Wisdom debuted his Fall 2018 collection at a fashion show, celebration of architecture, and semi-epic dance party in the YCBA’s parking lot downtown. Just four months after moving into a Yale Properties owned storefront beneath the YCBA on Chapel Street, Wisdom dedicated his autumn collection to architect Louis Kahn, who designed and worked on the center from 1972 to his death in 1974. Close to 200 people attended the event, which included a mini, pre-show fashion show from The Shops at Yale. 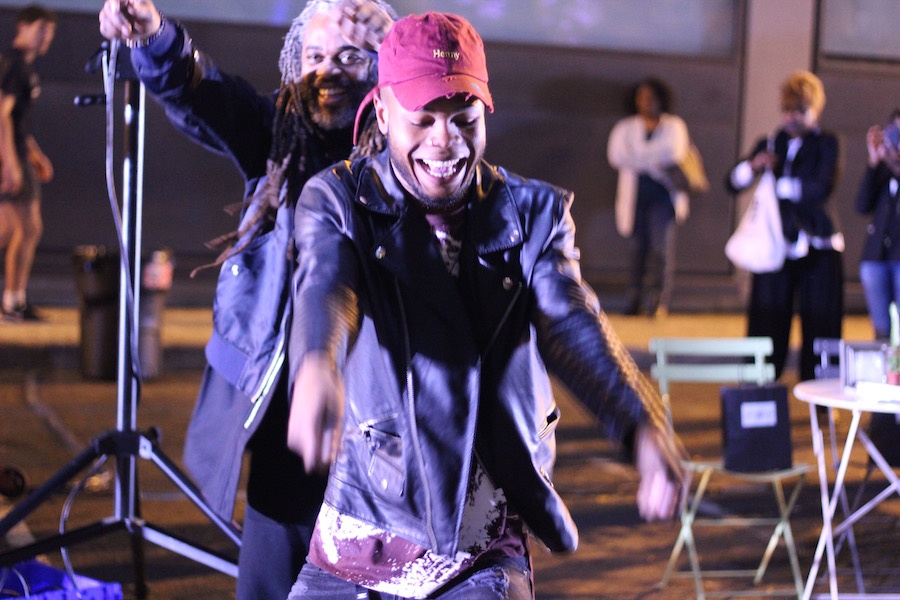 “Growing up in Jamaica, I could not have dreamed about this,” Wisdom said Friday night, addressing the crowd before the show began. “But it’s awesome.”

He added that he’s gotten to known Kahn in the last few months, so intimately that dedicating a collection felt right. “I wanted to pay tribute to him in my own way,” he said.

That history goes way back—not just months, but decades. Kahn began work on the Yale Center for British Art in 1972, as Yale professor and art historian Jules Prown stepped into the role of its first director. At the end of the 1960s, philanthropist and collector Paul Mellon had promised the university his large, century-spanning collection of British art, a grouping that includes William Hogarth, J. M. W. Turner, and John Constable among (hundreds of) others. Kahn wasn’t Prown’s first choice—that honor went to architect Eero Saarinen, who completed the nearby Ingalls Rink in 1958. Richard Meier, who later built Yale’s art library on York Street, was also in the running. 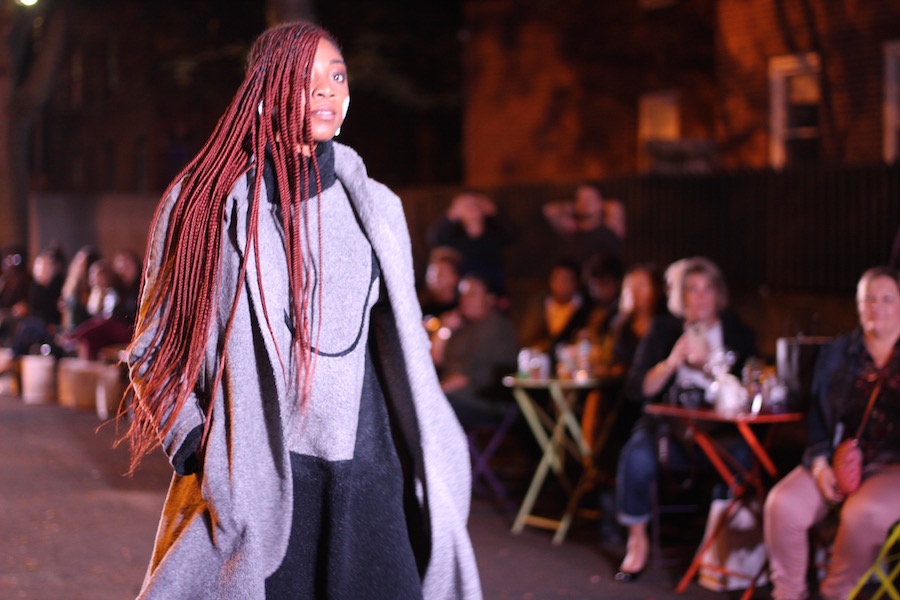 But Kahn and New Haven had history. The architect designed the Yale University Art Gallery (YUAG) as his first big commission in 1953. The YCBA, just across the street, would ultimately be his last. Nearing the end of his life in 1972, he hit some of the same notes—ceilings with deep, triangulated concrete beams, winding and angular staircases, contrasts in shade and color, lines that announce themselves, but are also sleek and economical.

But the building is also its own: the center draws a certain energy from its winding, long, and sometimes labyrinthine galleries, huge-windowed bays, big, open middle and high ceilings. In the building’s sculpture court, a concrete, cylindrical staircase could be a grain elevator in another life, shockingly grey and industrial-looking among animal paintings by George Stubbs. It is, from the outside, an austere sort of lockbox on stilts, and you have no idea what treasures are within.

Wisdom, from the beginning, seized on Kahn’s potential for his work. When he moved into the space in May, he he noted the building’s sleek facade, playing with its platinum palette as he and Brand Director Lauren Sprague readied the shop for its grand opening. By then, he had architecture on the mind: he is the costume designer for Stephen Dest’s upcoming film Grace, about an architect’s life in New Haven. 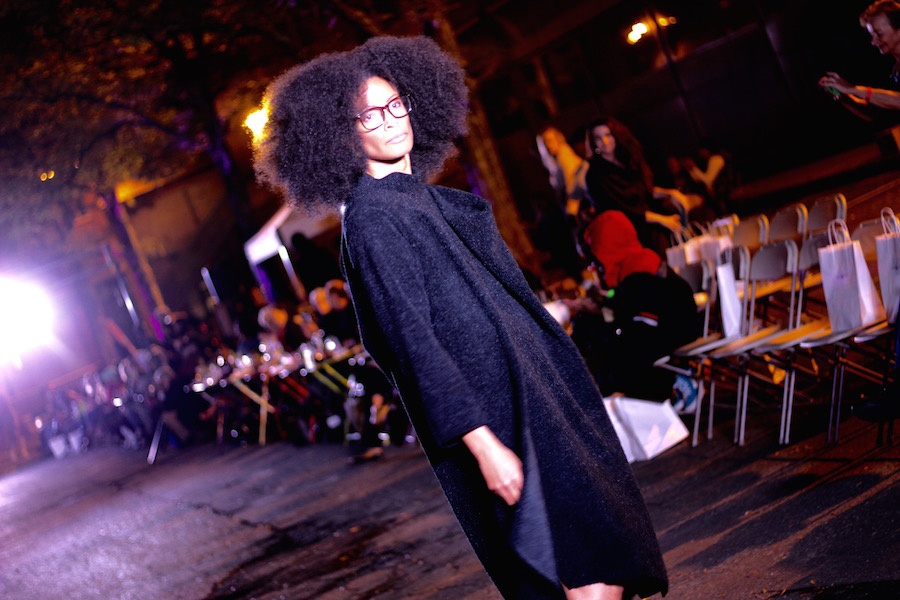 Around the same time—Wisdom opened the shop officially with a ribbon cutting in early June—he took a tour with YCBA Deputy Director Constance Clement, who spoke about the space’s 44-year history, 2016 renovation, and particular brand of modernism. Wisdom returned to his workbooks, equipment and materials with his head full of new designs. He made a weekly practice of hopping between his two shops, a Whalley Avenue atelier in Westville and the smaller space at 1080 Chapel St.

Friday night, it was finally on display after months of furious output. After a fashionable amuse bouche from The Shops at Yale and dance number from Javon Fletcher, Jason Garcia and Wisdom himself, a recording of Kahn’s voice boomed over the crowd. It echoed, mixed in with a propulsive beat from DJ Dooley-O. Models flooded the runway, spinning decades of architectural history into cotton, polar fleece and raw silk. Many sported bright white circles painted on their cheeks and jewelry from the center’s gift shop, also in homage to the artist. 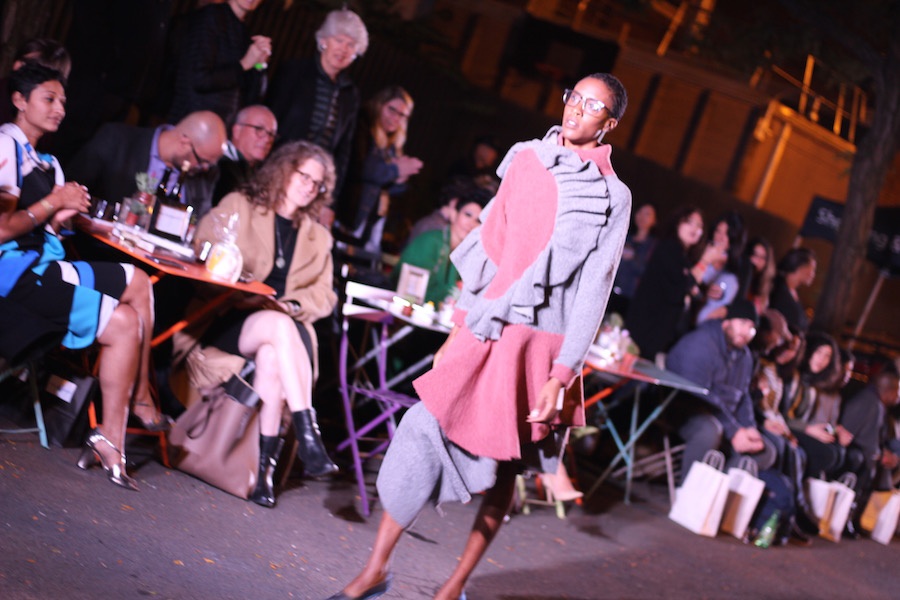 The collection is new and old, uniquely Neville Wisdom but also unexpected. There’s something familiar, yes—clothes maintain a certain swoop and hang on bodies that has been Wisdom’s thing for some time. But the designer has added sleek, form-fitting dresses in black and burgundy, tightly-knitted turtlenecks and cowls, gowns and coats with hidden lines, and open, and angular cuts that curve at the base.

In one piece, model Ashley Raymond had transformed into the center’s staircase, grey fleece ruched over layers of red. In another, Kahn’s famous triangles had made it onto a tight black dress, working their way down the center as they glinted in the light. In a third, Wisdom was back to the staircase, layering big circles of grey and red on each other in a skirt, to mirror a two-toned turtleneck above. Another, swaying as model Dana Cobbs worked the runway, and red and black kissed each other on an angular, flowing gown.

It is, of course, a posthumous party for Kahn, and new way to see a building that is almost 50 years old. But it’s more than that. Wisdom is an immigrant from Jamaica, a country that was ravaged by European colonial slavery in the sixteenth century, then ruled as a colony of the British crown from 1707 until 1962.

Kahn too was an immigrant, who came to the U.S. as a child of poor Jewish parents, from what is now Estonia. He went on to create buildings that have been called severe and poetic at the same time. Like Kahn, Wisdom can make geometry bend to his will: shapes snap into submission at his fingertips, all of them works of art that build to a show-stopping whole.

But he is also ushering in a new way to imagine how, and why, we tell the story of what Kahn designed, and the collection that lives inside. In the past several years, the center has begun to reckon with its own identities—modern but colonial, cutting-edge but stodgy, free but perceived as inaccessible and prohibitive. 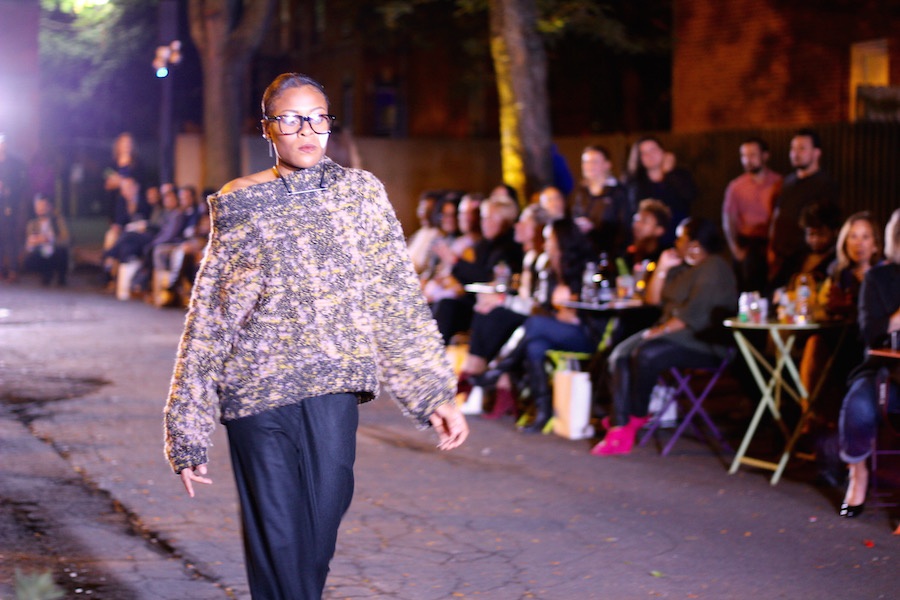 It has a way to go: in its display of “Britain in the World,” it references international exchange, immigration, and an imperial vision, but never calls out slavery, colonialism, forced migration and indentured servitude by name. Its outreach programs and student-curated shows often target academics before they do New Haveners, a museum for the university before it is one for the city in which it lives.

And yet, the center getting there. Wisdom’s fall collection mirrors the YCBA’s own best practices—new attention to works by artists Joscelyn Gardner and Yinka Shonibare, colloquia on prison reform spurred by the exhibition Captive Bodies: British Prisons, 1750–1900, and upcoming exhibitions featuring Lynette Yiadom-Boakye and Njideka Akunyili Crosby. In the past five years, it has welcomed students in the New Haven Promise program, employing several after their temporary summer stints have ended.  It's an attempt to bridge community, and Wisdom may be wrapping that bridge with fabric, and patterns that pull you instinctively in.

As the show’s music faded and models paraded out one last time Friday, dancers Javon Fletcher and Jason Garcia retook the runway, ushering in a dance party of monumental proportions just as they had ushered in the show. It was slow to start: just one audience member breaking it down to Childish Gambino’s “This Is America,” sliding in with Fletcher and Garcia as they moved like silk. Then the vocalist Thabisa made her way in, popping Fletcher’s cap onto her head like a crown. She bobbed in and out of the circle, bringing more people in with her each time.

Audience members made their way in, some bouncing babies while others rocked their shoulders, bobbed their heads, and swayed cautiously before losing themselves to the music. Some raised their glasses, toasting each other, toasting Wisdom, toasting Kahn. Wisdom chatted on the periphery with a big smile on his face, drawn in before the night had ended. He sailed around the space, as if his body had been built for it.