Yale Cab Sails Over The Moon 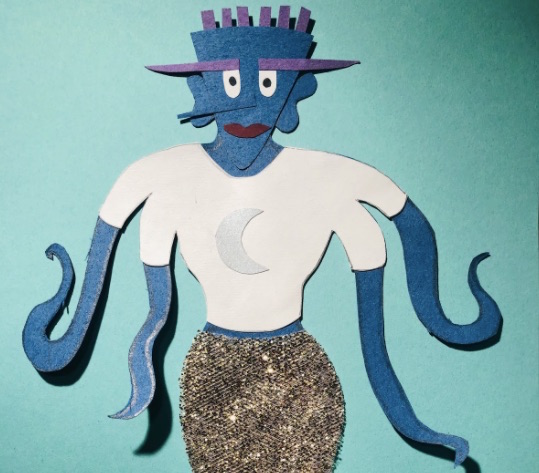 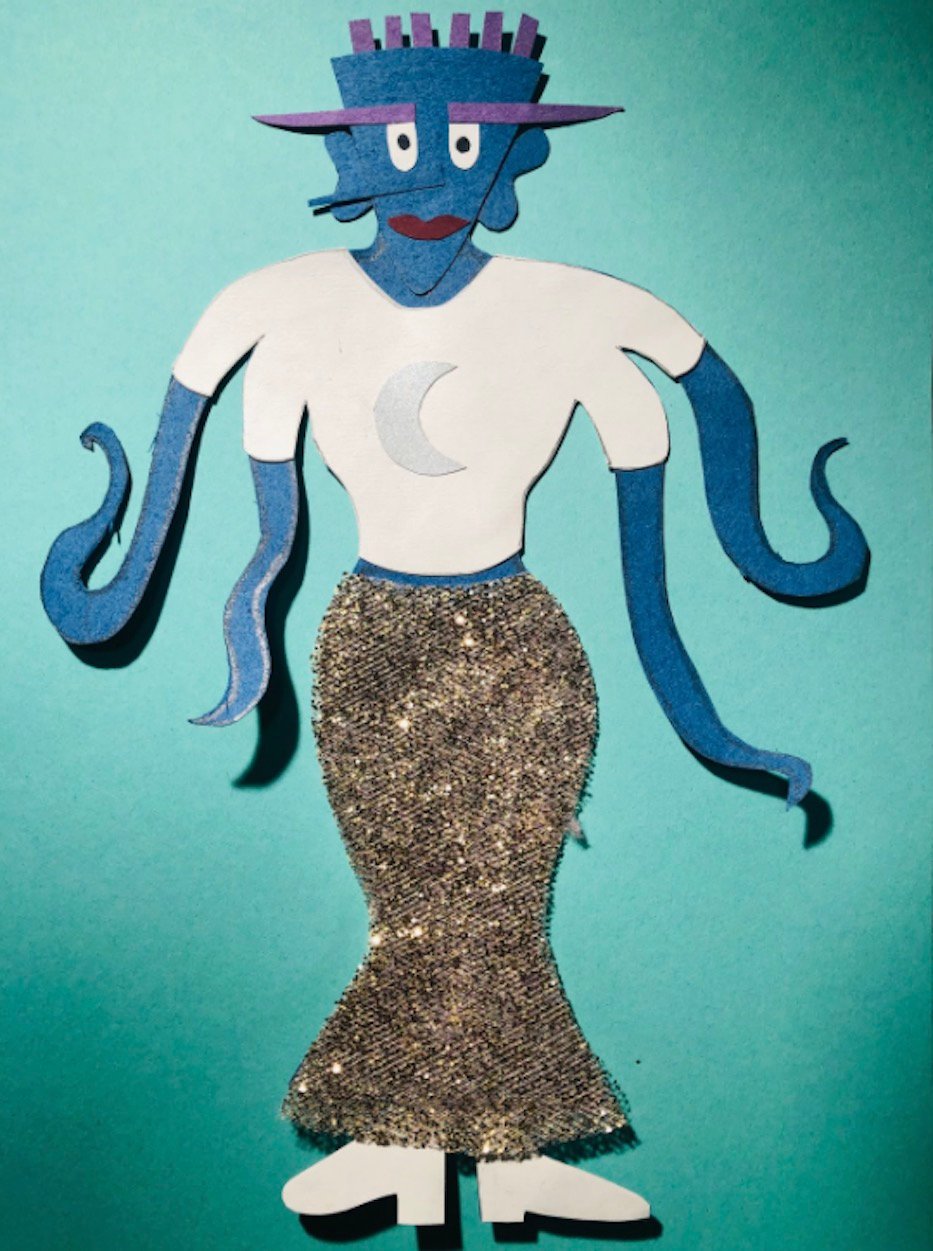 The Woman from Venus stretched her four tentacle-like arms and belted, her voice seeping through the Zoom multiverse. She had a cobalt blue complexion and purple eyebrows. She sang dressed in a gold sequined mermaid skirt, a white t-shirt with four arm holes, and white go-go boots.

“I’m a woman from Venus/I’m meant to love a man from Mars/There was nothing between us/It wasn’t written in our stars,” she sang. “And I thought I was broken/I couldn’t sing a love song tune; But then I saw her/The woman in the Moon.”

The Woman from Venus (Madeline Seidman) is a character in Let’s Go the Moon! a puppet musical for Zoom proposed, created, and directed by Jisun Kim and Nicole Lang. Friday and Saturday, the musical premiered at the Yale Cabaret as part of its virtual 53rd season. The work featured music by Soomin Kim and Samantha Wolf and lyrics by Alana Jacoby.

In this puppet production, four “lonely, intergalactic beings”—one NASA Mouse (Shimali De Silva), one Woman from Venus (Seidman), one Moon Rock (Maeli Goren), and one Rover (Nat Lopez)—share a destination: the moon. What they do not share is a motive. One wants to eat cheese. One wants to fall in love. One wants to return home. And one is hopelessly lost.

While the characters in Let’s Go to the Moon! do not agree on what they each believe the moon to be, they are bound by one space ship. As they hurtle aimlessly through space, they realize their destination is an increasingly insignificant part of their shared journey.

The play prepares viewers for that realization as it dawns on characters themselves. In one early scene of the show, NASA Mouse navigates a beige and orange maze. She is petite, with two round ears that sit largely atop her little body. Backed by an electronic xylophone, she asks herself in a wistful tone, “What if there is more out there for me?”

The audience can hear the yearning in her voice: moon-bound travel is the only antidote to NASA Mouse’s spiritual pain. Her existential puzzle is in disarray. De Silva, voice of NASA Mouse, embodied the character with a voice that was soft, yet certain.

When the xylophone concludes the song with the promise of a high note, the audience anticipates a positive turn of events. NASA Mouse then escapes her cage, scurries across the room in classic mouse fashion, and discovers a blue rocket with red windows and silver piping.

Three shots of orange fire soon spit out the bottom of the rocket as the ship climbs up and out of frame. Accompanied by a cheerful piano trill, NASA Mouse sings, “Let’s go to the moon.” The resilience of NASA Mouse and the propulsion of her puppet pushes forward the play. 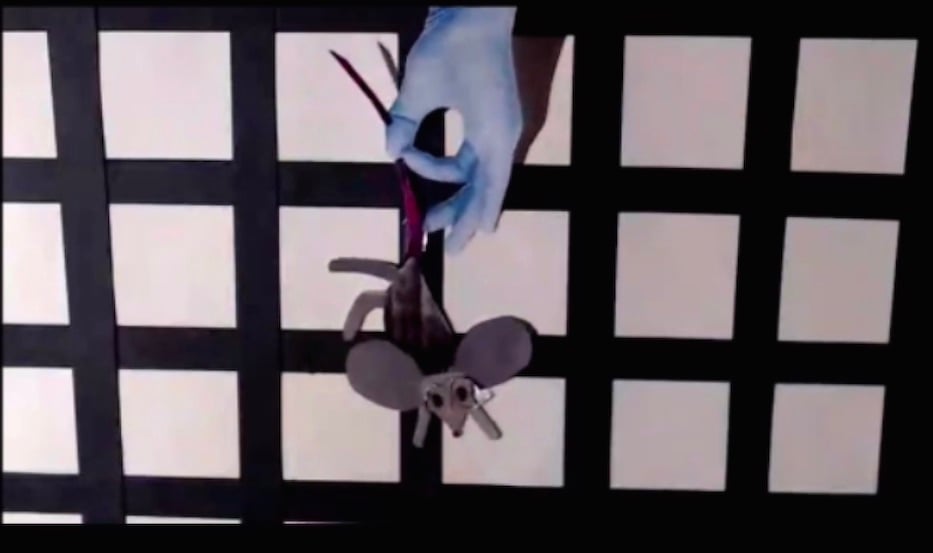 Later in the show, the Woman from Venus tumbles across the purple galaxy in her weather balloon. The blue woman dodges grey asteroids with a strong, measured stance, until she collides with NASA Mouse’s spaceship and plummets “down” space with her white go-go boots flapping above her purple hair.

NASA Mouse promptly fastens a halo-shaped helmet to her small head, secures herself with a rope to her spaceship, and floats through space to retrieve the Woman from Venus. The music is tense, until they meet and return to the spaceship together, and the music fades to silence.

There is a wonderful sense of experiment in the puppets themselves, who come alive as actors voice them behind the scenes. With bright color and comic design, the puppets infuse the family-oriented show with magic.

Near the end of the production, the four characters dance together around the aqua-colored space capsule before a flash of blue, and a sky full of black stars, consumes the Zoom screen. A black space ship, with a heart-shaped window, sails past the moon into the infinite, watercolor beyond. The puppets of Let’s Go the Moon! have each other now, and that is enough.

Or, as the characters sing in a final harmony, “Come with me, and you’ll see, the journey is really all we need.”

In the 30-minute talkback following Friday’s opening night performance, the cast described the unconventional nature of Let’s Go to the Moon! They compared the thrust of the musical to the five-week-long production process of the show itself. From creating the story to building the machine-like structure of the performance, the cast and crew were uninhibited with themselves and with each other.

“This was an atypical project,” Kim said. “I have not seen a puppet show like this at the Cab before. I am not used to sharing my process, sharing rough drafts with people. It was nice to show those rough drafts and open it up.”

Goren called the play “the most gentle and trusting process I have ever been a part of.”

“Part of the aesthetic of this is mistakes,” she said. “[It was] so liberating and beautiful to be part of something like that. [It’s] meant to be joyful all the way through.”

“My tendencies to be a perfectionist had to go by the wayside. Not everything is as perfect as I want it to be on my end, and that is freeing,” added sound designer Emily Duncan Wilson. “I am having the best time I had in a really long time.”