Young Musicians Make The Most Of The Snow 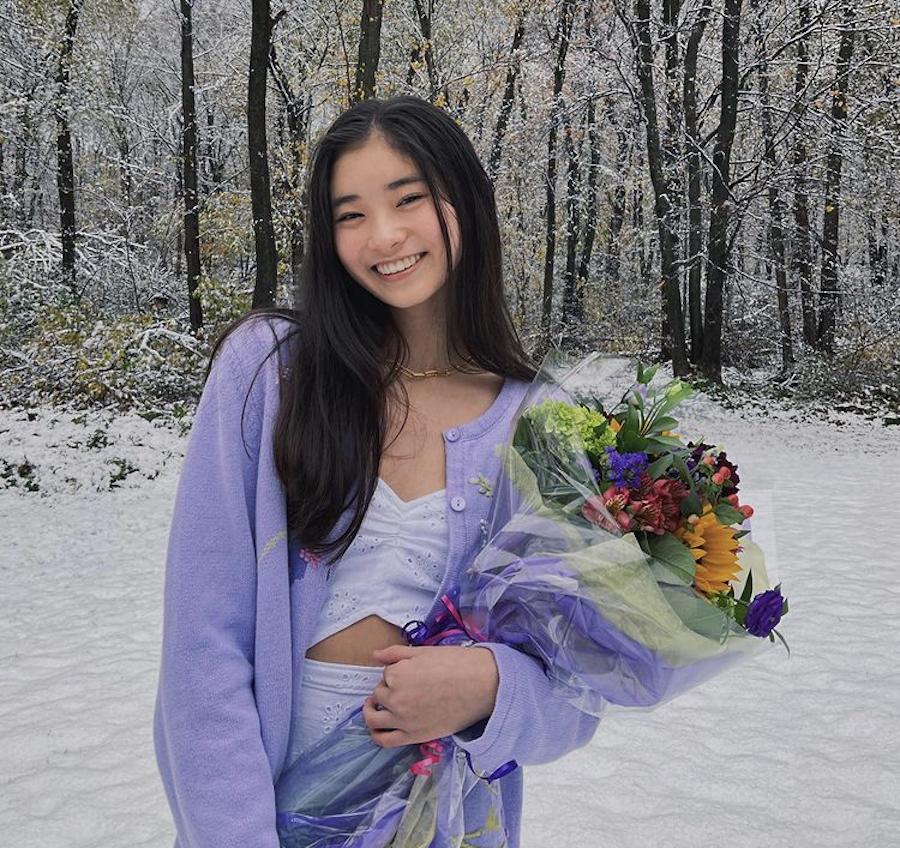 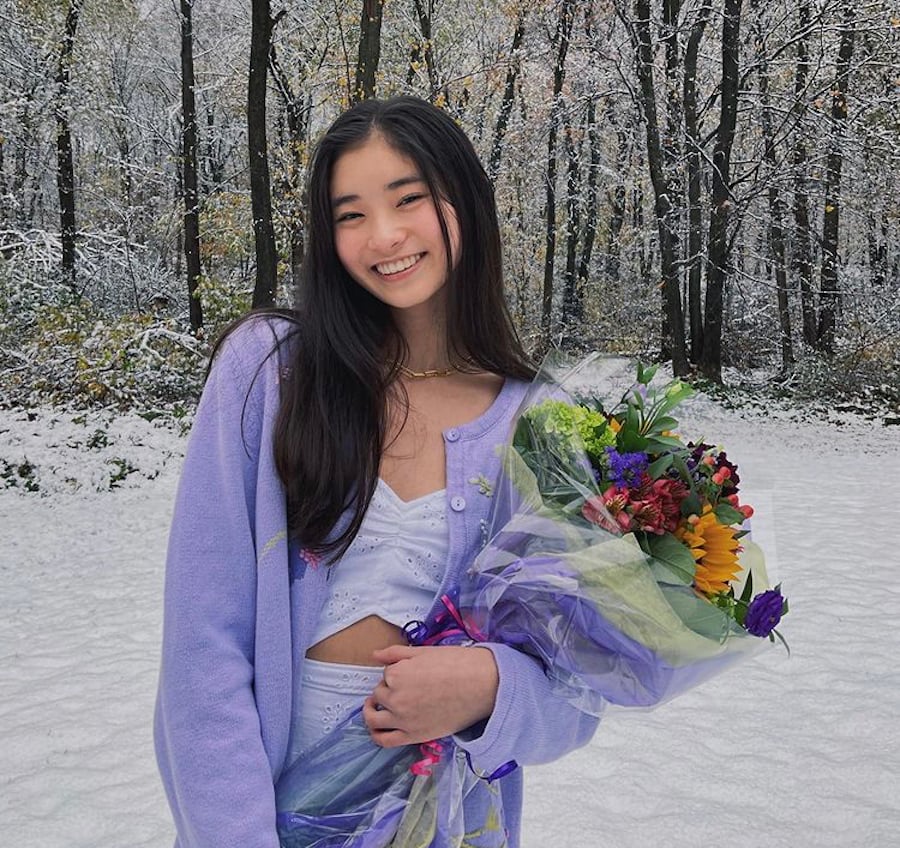 Marin Korenaga: “I think singing really helped me." The photo below shows her at a pre-pandemic concert with the musician Masie Peters, who she identified as a role model. Photos Courtesy of Marin Korenaga.

Marin Korenaga’s “Snow Falling On Cedars” starts with the rustle of movement on a recording device, a distinctly human sound before keys and vocals take over. It’s only three seconds, but it pulls a listener in. They can see Korenaga sitting down on her piano bench, looking to a thick snowfall outside. She sets her hands gingerly on the keys and begins to play. The sound is at once deep and tinny, resonant across the distance.

15-year-old Korenaga is one of the winners of Neighborhood Music School’s Snowy Day Songwriting Competition, created for a winter that has been particularly snowy and isolating in the midst of remote learning and a global pandemic. Korenaga shares the title with 9-year-old Eden Levy-Roginsky, a student at Worthington Hooker School.  For both students, the competition is a window into how music is helping young people move through a year upended by Covid-19.

“This year has been pretty rough,” Korenaga said in a Zoom interview Monday afternoon. “I think singing really helped me. I’ve been able to really escape through my music. You never know what’s going to come out, writing songs. It’s a way to just keep up with my feelings.”

The competition was born a few weeks ago, during some of the first heavy snowfall that Connecticut received in January. Korenaga, a sophomore at Amity Regional High School, saw an email from NMS pop into her inbox and started to think of what she could submit. Prior to this year, she participated in NMS’s youth orchestra; she has taken lessons in both piano and violin through NMS. She still takes music theory classes with the school.

She thought of a song she composed last year, as she was navigating the tension between hybrid and remote learning (as Covid-19 cases continue to rise, she has gone fully remote). For Korenaga, songwriting is a meditative process: she writes several times a week, jotting potential lyrics down in the “Notes” application on her phone (currently, she's up to 705 entries, of which about 200 are finished). When she’s writing, she often uses it as a chance to sift through her own emotions. Two days after the insurrection at the U.S. Capitol Building, for instance, she posted on her YouTube channel with a new song weighing in on the violence.

She also tries to imagine experiences that she’s not yet had, like a high school break up. In  “Snow Falling On Cedars,” she conjures a great love between two people, cut short by burnout. She experimented with a hook that could build around soft, lush layers of piano: Is it ok that I miss you? Is it okay that I’m hurting still? As she wrote, clouds hung low overhead. The title is based on the David Guterson novel of the same name, which a friend gave her last year.

“It just flowed to me,” she said. “I was just thinking of snow, and it was really just like a winter song.” 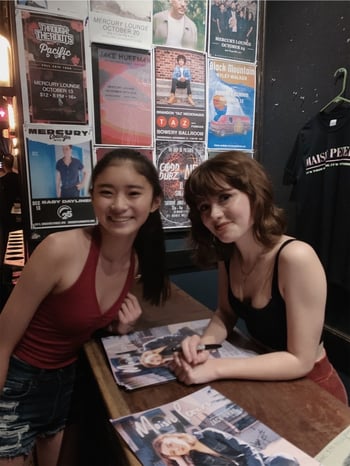 “When I’m singing, I feel like I just like … it’s just like the emotions are going through my head,” she added. Sometimes the lyrics glide upwards. Sometimes they catch on something in her throat, and come out mournful and flecked with nostalgia. She has singer-songwriters who sit on her shoulders when she writes, including the musician Masie Peters and Jeremy Zucker. Peters in particular has become something of a role model after seeing her in concert two years ago.

“The reason why I started writing music in the first place is my dream is to be a singer-songwriter in the future, and really connect with people through that,” she said. “Those songwriters ... that’s what they’ve done for me, and I want to do that for other people.”

Nine-year-old Eden Levy-Roginsky went the instrumental route. Her two-minute “Hunters and Animals” takes a listener on a short aural odyssey, switching perspectives from hunters to birds, elephants, and wolves. It’s a meeting of classical music, pop culture, and her own imagination: references include Vivaldi’s Four Seasons, the 2016 movie Zootopia, and a fierce love for elephants, including one that is pictured on her bedroom wall.

When NMS announced the competition, She recorded the piece over an entire day, laying her own piano and violin tracks over each other using the program Audacity. While it was not written specifically for the contest, a listener can imagine hunters trudging through a snowy wood in time with the music. She said she has only recently started composition, after years of studying both the piano and the violin. Her dad helped her as she worked on the piece.

Like Korenaga, she has looked to music as a constant in a year that is not. After last March, her classes went online for months. Spending time with friends became harder, and was often relegated to a screen. Music helps her stay calm, she said. She often finds that she’s lost track of time because she’s so immersed in a piece. If she hears a melody during the day that she likes, it stays with her at night.

When she was writing “Hunters and Animals,” she tried to summon the sounds of bipedal animals and those with wings, paws, and thundering hind limbs. She played with a time signature that could slip between her characters. As a self-described “cold weather person” who loves playing in the snow, the chance to record it for the competition also came right on time.

“Music is my life,” she said. “Mostly it’s fun. Sometimes because I’m enjoying it so much the time flies so quickly.”

Listen to both pieces here.