Beyond Banal: The Still-Life Paintings of William Bailey 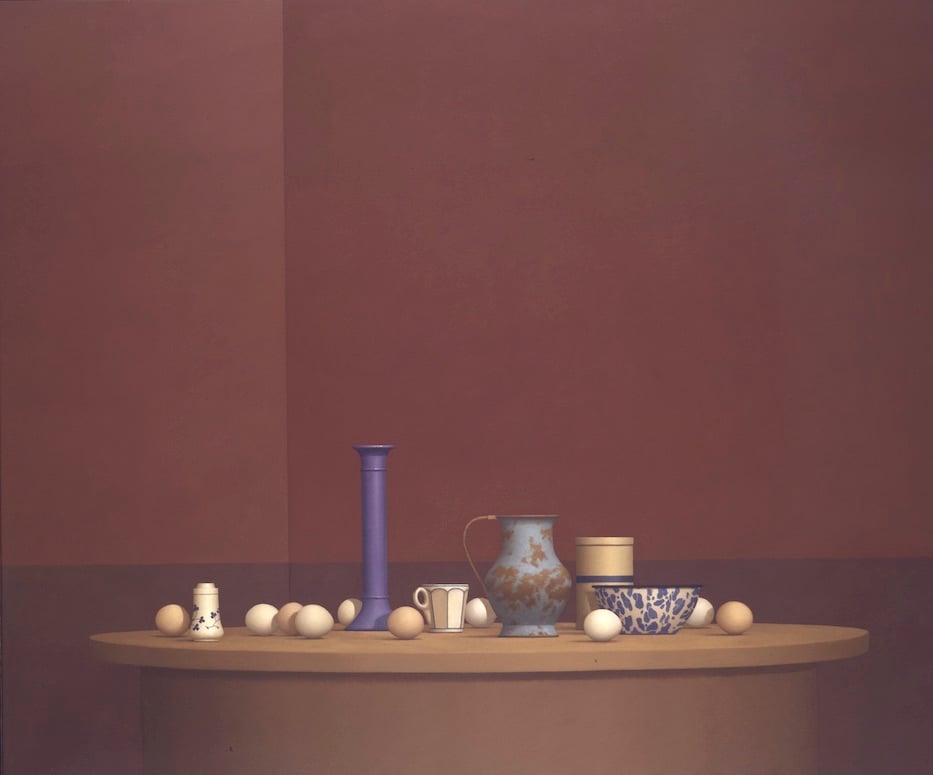 Ten eggs, a small mug, a blue-and-white marbled enamelware bowl, and other vessels are scattered on top of a large wooden table, positioned nearly at eye-level. Only a sliver of the table’s surface is visible, with the burnt sienna wall covering the largest area of the painting’s unlikely composition. This quiet painting seems at odds with a swift and superficial way of seeing, the mindless way we scroll through social media sites.

In "Plateau" (1993), the representation of mundane items is representative of many similar paintings in William Bailey: Looking Through Time, which presents around 40 works from Bailey, a professor emeritus at Yale, that cover six decades. As a student of artist Josef Albers at Yale in the mid-1950s, Bailey echoes the formal precision of his teacher—the author of Interaction of Color, an experimental text first published in 1963 that guides readers through a series of exercises to observe how colors behave.

They also share a dedication to a specific genre—Albers to his meticulous studies of the spatial relationship between colors, notably in the Homage to the Square series, and Bailey to the still-life. 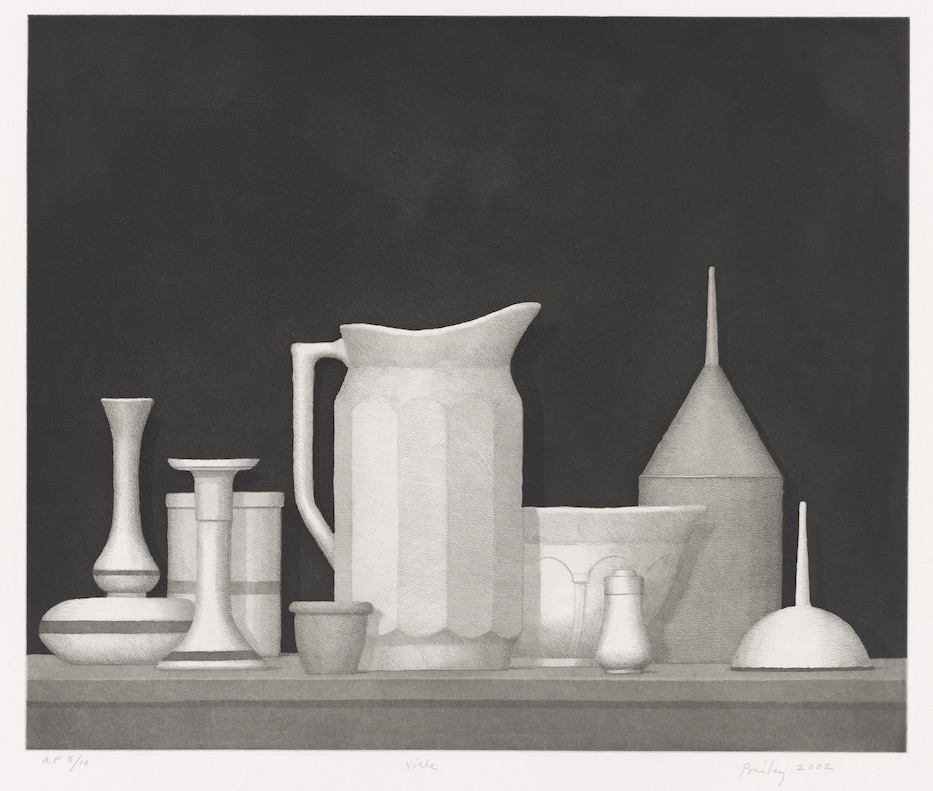 Bailey created many of the works in this survey after a formative trip to northern Italy around 1970. Several of his artistic inspirations—Italian greats Raphael, Pierro Della Francesca, and Giorgio de Chirico, for example—hail from this country, where Bailey began spending the summer months, leaving in May at the end of the spring semester and returning each September to start the new academic year. Bailey’s compositions became populated as he spent time abroad, whereas his earlier paintings had often been spare—very simple objects on tables as seen in his 1974 "Eggs."

While Bailey’s airy paintings carry a similar somber resonance to those found in the precision of Della Francesca, a different Italian artist arises as a kindred spirit upon greater reflection. Giorgio Morandi spent decades crafting the careful likeness of vases, bottles, and bowls—many of the same recurring characters in Bailey’s paintings. Both artists also mostly worked within the narrow confines of the still-life when the genre was far from in vogue within the art world.

"Still Life—Table with Ochre Wall" (1972) exemplifies Bailey’s affinity for—often, warm and fairly restricted—tonal structures, consistent with many of Morandi’s works. The time of day is not knowable and the still-life begins to appear less real with closer examination. Yet Bailey renders the space with credibility, and this uncanny believability puts his works in direct conversation with the humble table-top vistas of Morandi.

There is one stark contrast between these artists: Morandi always worked from life, but Bailey never did. Instead, he preferred to construct groupings in his mind, sometimes making preparatory drawings before embarking on larger works on canvas. Morandi favored observation, Bailey imagination, but they arrive at a similar destination: a meditative territory within painting where objects are only—and anything but—objects.

Like Morandi, Bailey proved less facile with subjects outside the still-life. "Portrait of S" (1979–80) displays an awkward handling of the human figure, which was also conceived of by the artist, not painted from life. A woman sits before viewers, her unbuttoned top exposing her breasts.

Her pale skin folds into a gentle roll above the navel. Her expression is blank, but the vulnerability of the pose is all too present within this painting. Bailey’s drawings of figures yield less discomfort for viewers, but overall, his still-life works are far more intriguing, beguiling viewers through their austerity.

As an artist, Bailey takes delight in formal exactitude. Viewers will not find political or conceptual undertones in this work. His abstemious craftsmanship is at its strongest in the soft focus and warm palettes of his large oil paintings of familiar things. Here, viewers are rewarded for spending time with his still-lifes. A careful reading of one of Bailey’s imaginary worlds trumps a cursory inventory of the composition. Through time, as the exhibition’s title suggests, Bailey’s banal arrangements move beyond ordinary.

William Bailey: Looking Through Time runs through Jan. 5 2020 at the Yale University Art Gallery. To find out more about the gallery’s hours and collection, visit its website.