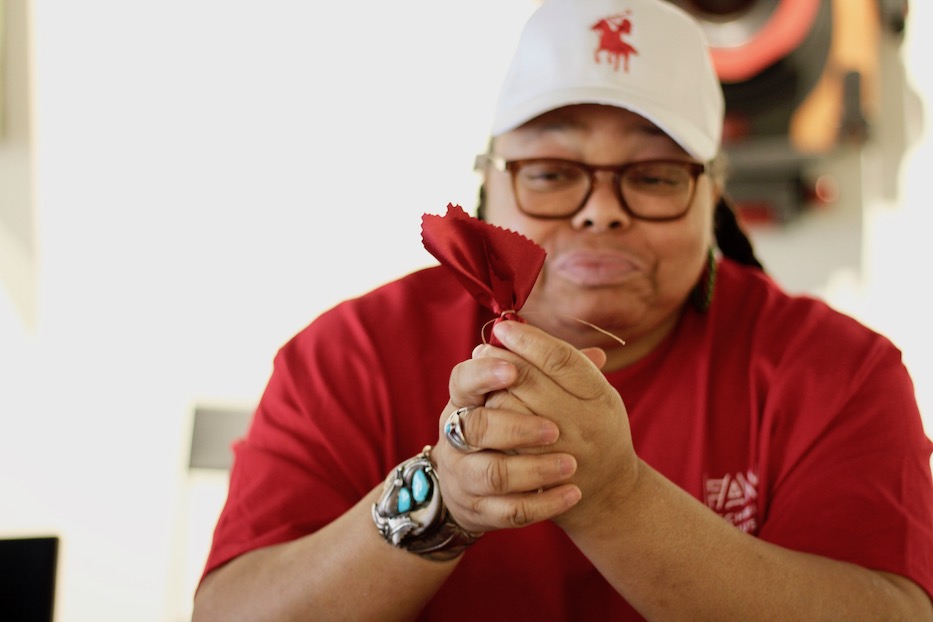 Kim Weston sprinkled a sticky, sweet-scented handful of cherry tobacco on a square of red silk. She breathed in the smell of wet wood and smoke and stone fruit. Then she began to wrap methodically, a length of sinew still waxy between her fingers.

Weston, a photographer who will exhibit her work at the deCordova Sculpture Park and Museum this April, is assembling 15,000 prayer bundles to honor the 15,000 Indigenous women and girls who have been reported missing and murdered between the U.S. and Canada in the last three decades.

In April, all 15,000 bundles will travel to the sculpture park in Lincoln, Mass., where they will be surrounded by seven of her large-scale photographs in the exhibition Visionary New England. 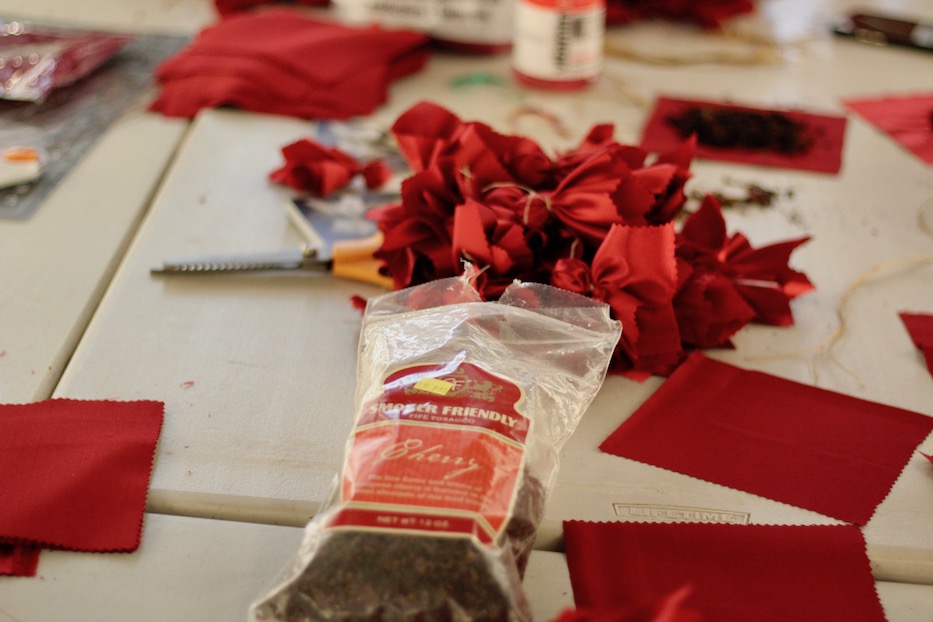 “These bundles represent prayer,” she said Sunday. “You take this, and you can open it up, and you can take a match or a flame and set it on fire and say a prayer. And that prayer will be carried by the white smoke of the tobacco to the Creator.”

“Bringing your intention and your prayer to light,” she continued. “That's the hope.”

The bundles are also intended to be teaching tools. Weston has chosen bolts of red silk because the color represents a movement to bring attention to a a staggering, still-growing number of missing and murdered Indigenous women across the U.S. and Canada. Her wife, Laura Fuller-Weston, explained that red also represents one of four colors on the Indigenous medicine wheel, where it stands in for birth and spirituality. Both wear red to the workshops. 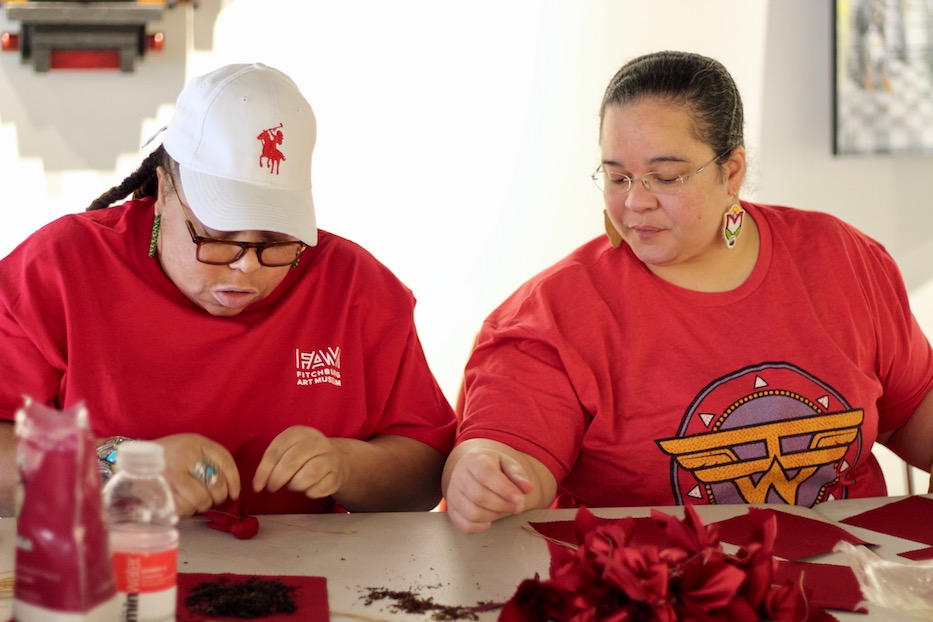 In 2016, there were 5,712 Native women reported missing and murdered in the U.S. by the National Crime Information Center, a number Weston estimates is in fact much higher. In Canada the same year, Prime Minister Justin Trudeau launched a National Inquiry into Missing and Murdered Indigenous Women and Girls. In 2019, a report on the inquiry concluded that thousands of Indigenous women and girls across Canada have been affected and killed by that sexual violence, which the state called a genocide.

But there’s no timeline for the initiative, which has been received with both praise and criticism across the 11 states in which it is being implemented. 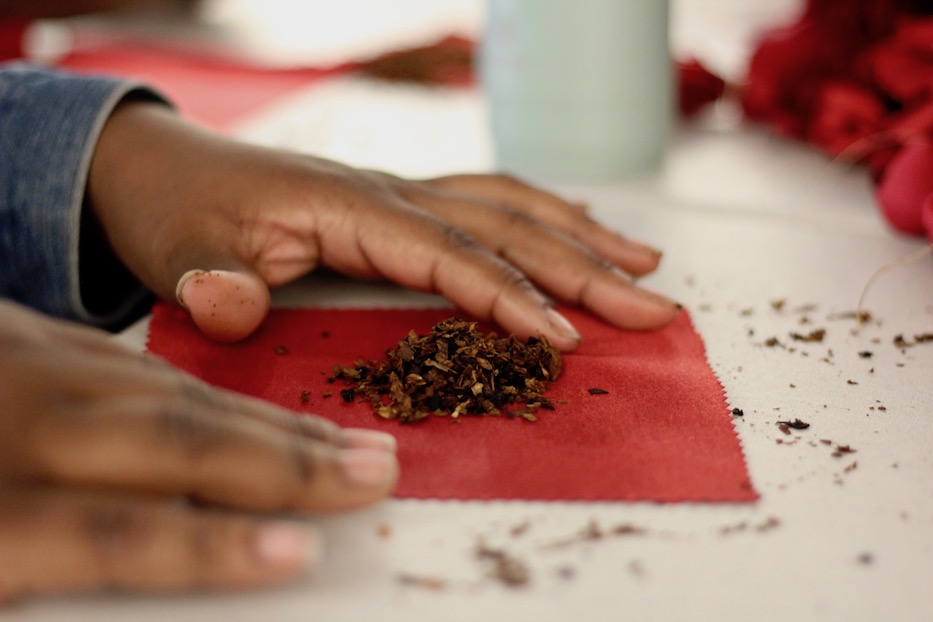 Weston said it’s a crisis for which she wants to see more decisive action and national media attention. In 2016, the National Institute of Justice reported that just over 84 percent of American Indian and Alaska Native women are subject to violence in their lifetime. Currently, only 13 percent of sexual assaults that are reported by Native women result in arrest, according to the U.S. Department of Justice.

That’s despite the fact that, as of 2012, one in three Native women reported rape or sexual assault, often at the hands of a white or non-Native perpetrator. Meanwhile, missing and murdered women who are found are not always properly identified as Native.

Sunday, Weston also explained that that number is exacerbated by the presence of so-dubbed “man camps,” set up for oil extraction and pipeline development on and around Native land. With her hands constantly at work—sprinkling tobacco, folding the silk, tying sinew—she traced a create a direct tie between the fossil industry and epidemic of sexual, environmental, colonial and racial violence. 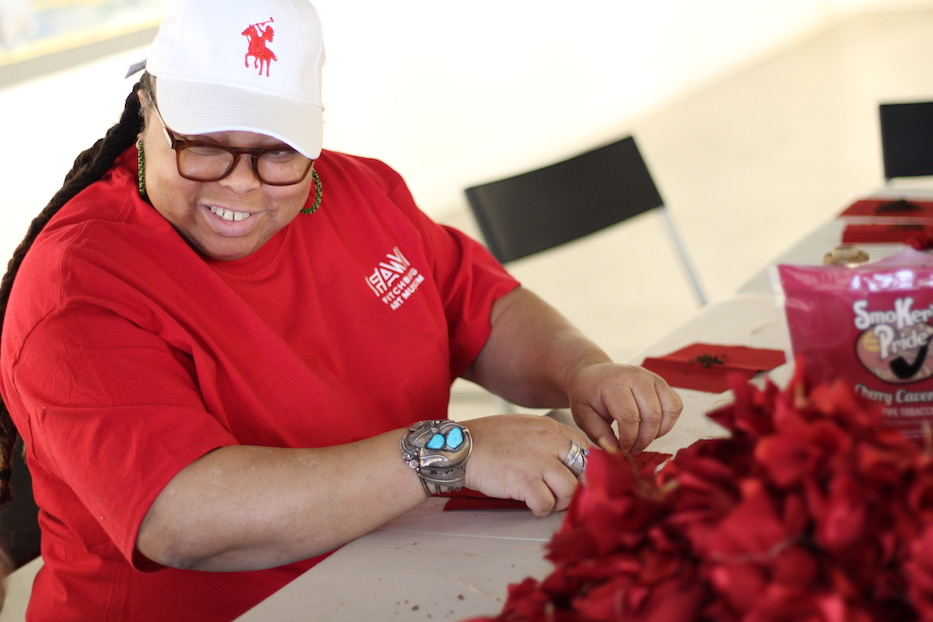 “It's one of those things where I feel like the government is not doing right by the people once again,” Weston said. “Once again, the government is looking at us as Native people and saying: 'I'm sorry, I can't help you. The fewer of you, the better.’”

Around the table, attendees listened and learned as they pitched in. Clifford Schloss, a musician whose grandmother was part of the Shinnecock Indian Nation, said the bundle making made him feel closer to a part of his heritage he hasn't experienced since attending a powwow when he was young.

It also made him angry, as he thought of the number of lives that have been lost without due process. As he worked, Fuller-Weston spoke about current protests in Long Island, where members of the Shinnecock Indian Nation have tried to stop the destruction of ancient burial grounds in Shinnecock Hills. 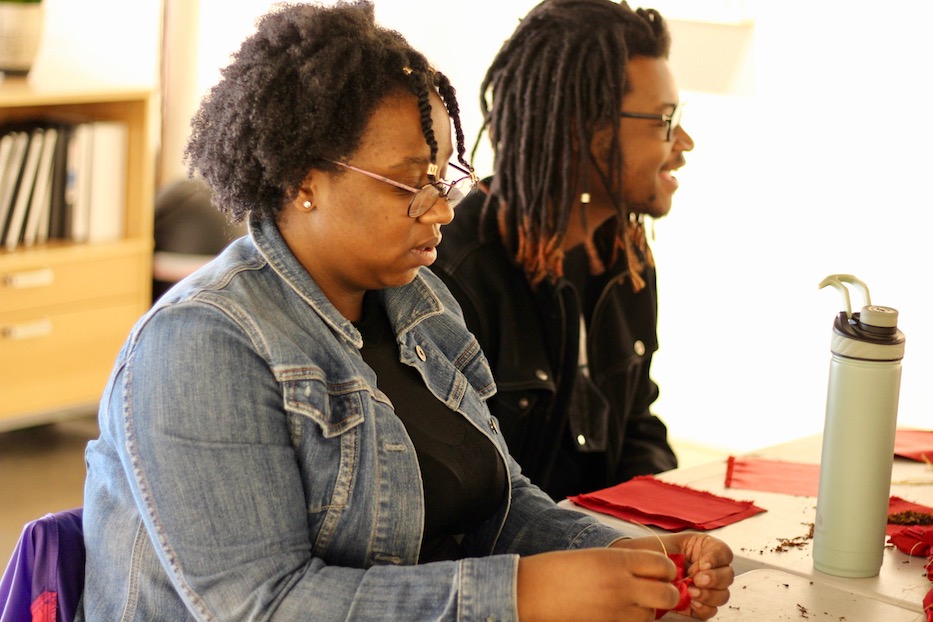 Briana Williams, a curator, writer, multimedia artist and activist who also identifies as part Native, said that she felt that surge of anger, but also felt a concurrent peace that she was able to channel it into “something beautiful.”

The bundles are meant to be interactive. Weston expects viewers to take them home, integrate them into prayer and ritual, and use them to teach others about an epidemic of sexual violence facing Indigenous women and girls across North America. She is using cherry tobacco because she wants viewers to be engulfed by the smell, and transported to place of ritual and prayer.

“This is to help the families bring closure to their loved ones and say, ‘please say a prayer for my people,’” Weston said. “I want people to be part of this. These are such sacred things.”

Learn more about Kim Weston's work at her website. A follow-up bundle making workshop is scheduled for March 22 at Kehler Liddell Gallery, in partnership with the upcoming show Journeying. The exhibition Visionary New England runs April 24-Sept. 13 of this year at the deCordova Sculpture Park & Museum.