A Broken Umbrella Plays Into Its First Decade 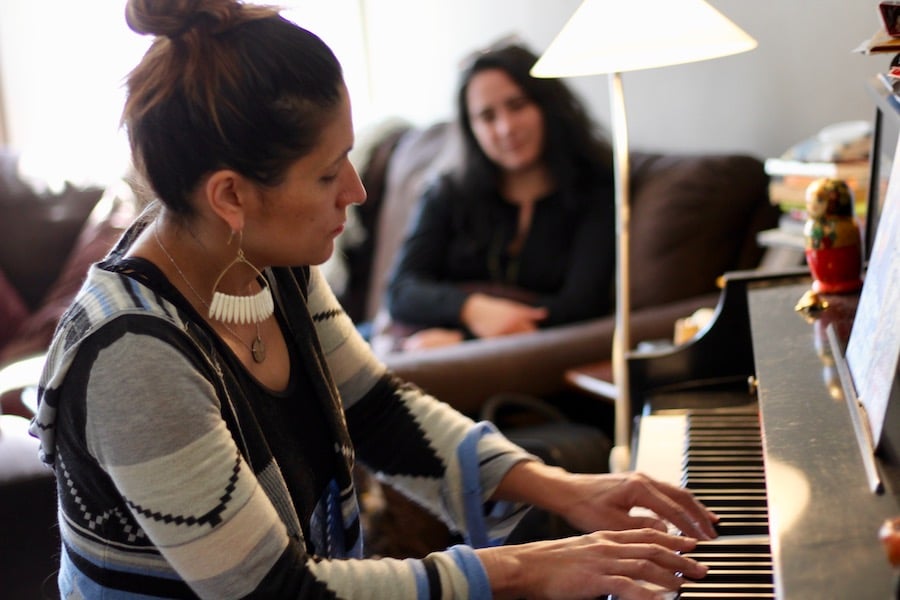 First they were college students who just wanted to try something out. Then they were twenty somethings in their first jobs, scattered around the country with a dream of reuniting. Then players in the park, so convincing in their roles the neighborhood kids thought they lived there all year round.

Now they don’t know exactly where they're going, but they know that it’s forward.

Ten years in, that’s the evolving story for A Broken Umbrella Theatre, the New Haven-based company that devises, produces, and performs original plays inspired by New Haven history. Thursday, the group will celebrate its first decade in existence with a concert and birthday party at The State House, featuring musician and founding member Chrissy Gardner. Tickets and more information are available here.

A Broken Umbrella has its roots at Muhlenberg College in Allentown, Penn., where founding members Ian Alderman, Ruben Ortiz, and Ryan Gardner formed a comedy troupe called “Uninvited Guest” in the late 1990s and early 2000s. For a while, the troupe—all college-aged guys, with a fair amount of college guy humor—toured the area, performing at other schools as they grew in popularity. 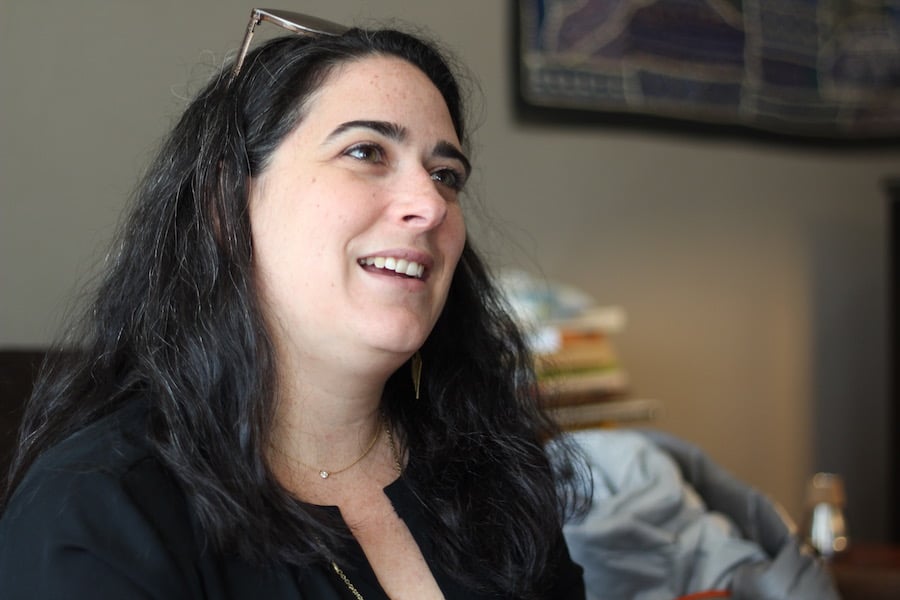 As members graduated, they started to talk about how to keep the troupe together. That’s where the name “A Broken Umbrella Theatre” first got its legs, as they put on a production of Samuel Beckett’s Waiting for Godot under the name. The performance was successful: the troupe drew crowds for the performances, and then brought the act to a minimum-security penitentiary.

“That was their first kind of foray into theater and community,” recalled Rachel Alderman, one of ABUT’s founding members who was also a student at Muhlenberg at the time (she is now also Ian Alderman’s wife). “And then they all went their separate ways.”

After Waiting for Godot had ended, it wasn’t clear what would happen to A Broken Umbrella. One of the members headed to Los Angeles. Another set off for Hawaii. Rachel Alderman and Chrissy Gardner both moved to Chicago with their significant others, growing closer as they worked at Davenport's, a piano bar with a cabaret in the back.

“It was one of those places where when you’re waitressing or bartending, you have to stop and sing a song in the middle of your shift,” recalled Gardner Wednesday, cozy in her apartment as she rehearsed for the show. “I think it got me past my nerves. You just get up and do it.” 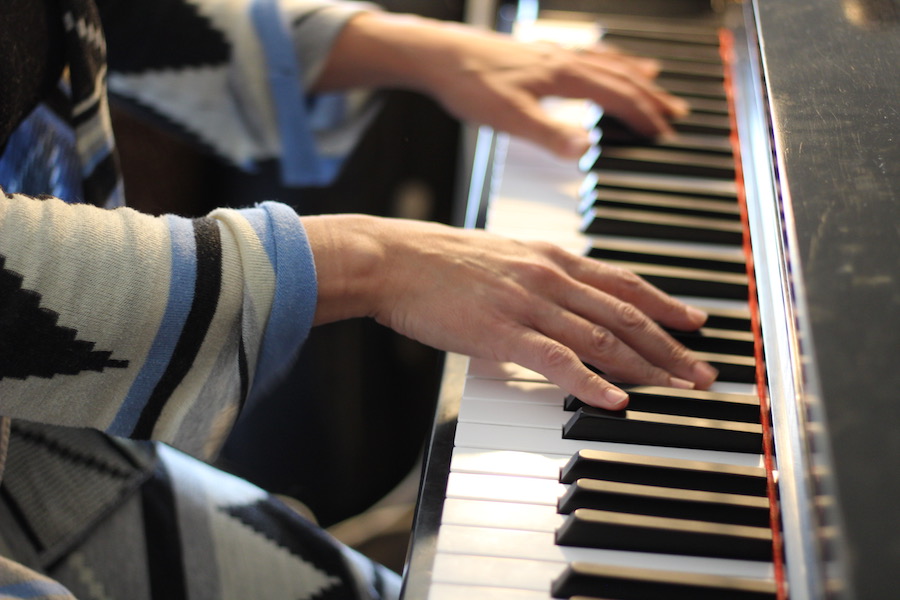 The longer the two worked at the bar, the more freedom they had with its spaces. In the early 2000s, they started making their own work, and using the back theater as their laboratory. Alderman devised experimental cabaret performances; Gardner began to write her own music. As they deepened their own practice (Gardner recorded her first album during her time in Chicago) they also learned new techniques from Gardner’s then-husband Ryan, who was working for the now-shuttered Redmoon Theatre, putting on plays in several of the city’s parks.

In 2006, Rachel and Ian Alderman moved to New Haven. Chrissy and Ryan Gardner followed them a year later with their infant daughter Lucy, who would later become a key performer in the company. And then in May of 2009, the committee planning Westville’s annual Artwalk asked Gardner if she could play for kids on the weekend of the event. For the musician, who had already recorded children’s songs, it seemed like too easy an ask.

“I just went to Rachel and I was like, ‘let’s make it into a story,’” she recalled. “And so we started to craft a story.”

Soon, Ian Alderman and Ryan Gardner had jumped on the project too. The two tested out puppet ideas and mapped out scenery, watching as a minimal set came together. Ortiz, who was in Los Angeles, jumped on as a long-distance collaborator for the first time since college—and then offered to fly into New Haven for the weekend of the performance. It seemed, Chrissy Gardner said, like they suddenly had a show on their hands. 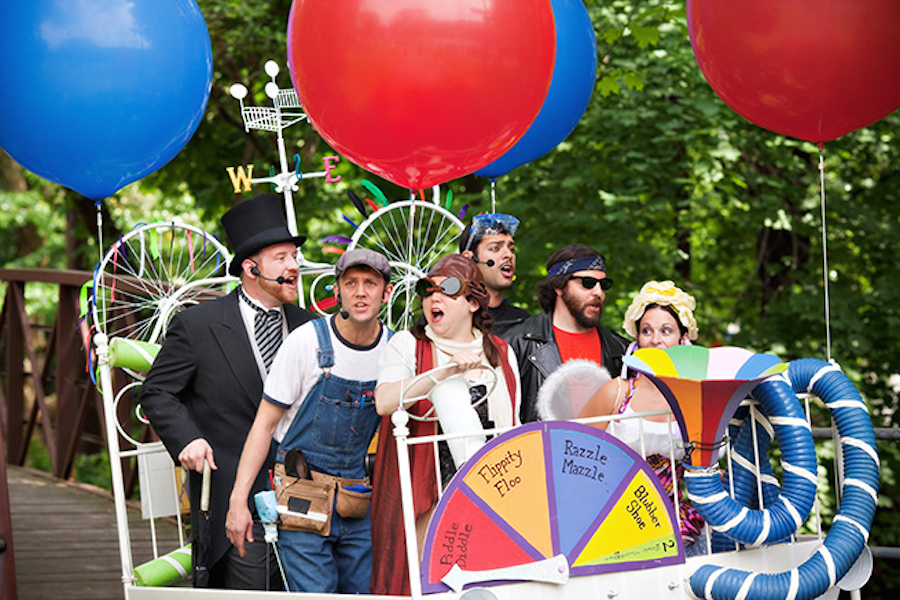 Alderman enlisted her brother on the piano and Gardner suggested that she could play the trombone when she wasn’t singing. Ian Alderman got some of his high school drama teachers involved in the show. Their set was Edgewood Park, where they performed from a tree. From the Westville Village Renaissance Alliance (WVRA), Sharon Lovett-Graff came onboard the day of, providing tarps for the audience during two rainy, but packed, performances.

“It was so by the seat of our pants, but also honing in on our instincts,” said Alderman. “Like, we said we would do it, so we better just show up.”

The group called their company A Broken Umbrella Theatre, a callback to the fledgling idea that they’d had as college students eight years before. Except this Broken Umbrella had women and focused in on community outreach. From that first performance, they also developed a sort of mission statement: that all plays would be collaborative undertakings, even if that meant they took longer.

After ArtWalk, A Broken Umbrella started to pick up speed—despite the fact that its members had full-time jobs, and several were starting families of their own. With Friends of Edgewood Park and WVRA, the company bloomed into its 2010 iMarvel and Thunderbolt, both performed in Edgewood Park. By the end of their first two years, the company had become enough of a fixture that neighborhood kids thought members lived in Edgewood Park. When Gardner and Gardner drove past the park, their daughter tended to point to a tree where the first performance took place, and exclaim that her dad resided there.

But ABUT, which practices site-specific theater, was just getting started. It rolled into local murder mystery territory with VaudeVillain, for which John Cavaliere opened a restored Lyric Hall to the company—on the condition that he be in the play. It told the story of Westville’s nineteenth-century match factory with Play With Matches, moving into a boiler room that doubled as its headquarters. It took on Connecticut’s bike history with Head Over Wheels, then moved operations downtown in time for the library’s 125th birthday in the fall of 2012.

It was their first major undertaking outside of Westville. The company scored external funding for the project, so that attendance was free or pay-what-you-can. Gardner recalled walking into the library with her daughter, who was mesmerized to be in the building after hours.

“We started realizing that we could engage with new neighborhoods and make new partnerships,” Rachel Alderman said. “As it evolved, we kind of found our New Haven voice.”

In 2013, it grew that voice in Freewheelers, taking over the old Horowitz Brothers warehouse (now The State House) during the International Festival of Arts & Ideas. With a placemaking grant from the state and a blessing from landlord Olympia Properties, ABUT members started to revitalize the building, tearing out the ceiling, redoing the floors, and repairing a semi-ancient Otis elevator meant to transport the audience downstairs—and “essentially back in time”—before the show. 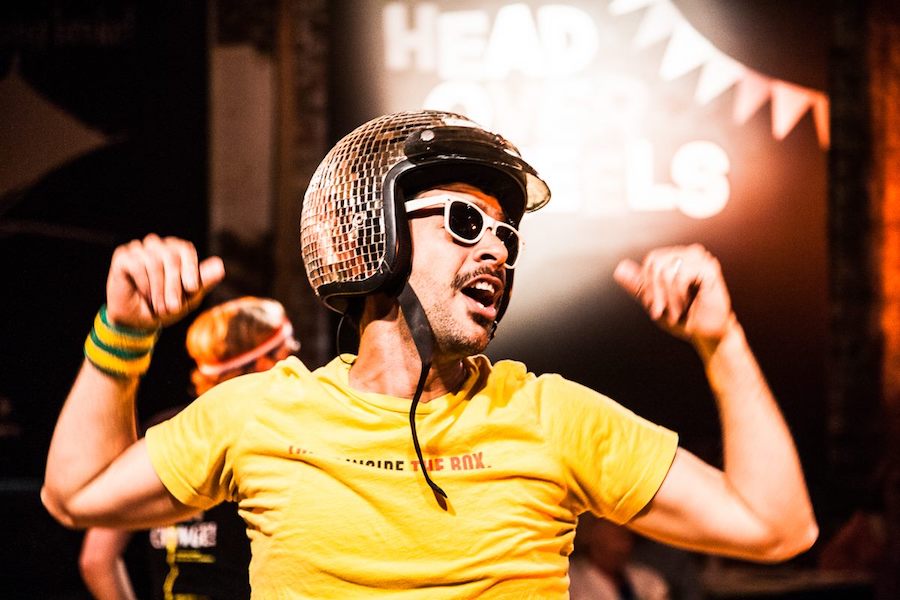 As they constructed the play, based on the 1866 convergence of New Haven’s corset industry and the first freestanding bicycle on the New Haven Green, members were also working through what it meant to be a growing company with families in the mix. In an interview Wednesday, Rachel Alderman recalled working late into the night at the building, while members’ kids napped in their portable cribs and three crock pots of chili simmered nearby. It’s just one of the reasons she and Gardner are expecting Thursday to feel like a homecoming.

“It’s exciting to me that it’s now a venue,” Gardner said, noting that several tracks on her latest album were influenced by the show. “We spent six months there late at night playing and creating.”

“We’re not done [with the work],” she added. “Especially with the Me Too movement. There’s more to say. It’s interesting that we did the show right before that, because it’s even stronger now.”

Since, the company has continued to experiment, devising works on local tinkerers, jazz-handed theater histories, and New Haven’s telephone exchange. It is currently working on a piece around the history of New Havener Walter Camp, a New Havener whose role managing the New Haven Clock Company is perhaps overshadowed by his place as the father of American football. 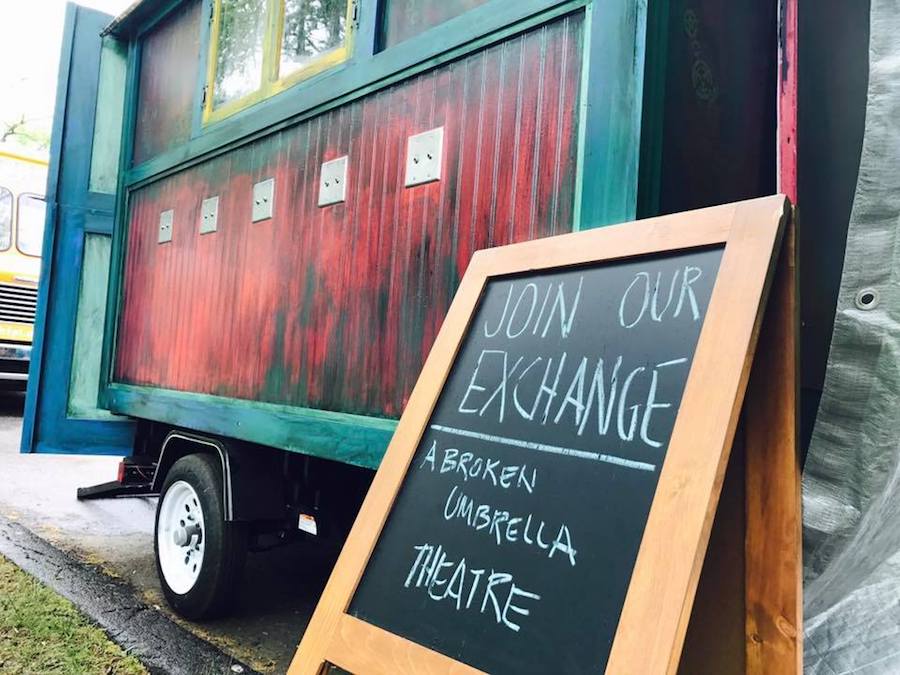 The first decade in existence hasn’t always been easy. Currently, the company has 15 core members, with anywhere between 15 and 75 more who will come onboard for a performance. No one takes a salary—funding goes directly into site-specific productions. More recently, it has also inserted a budget line for childcare, to eliminate a barrier to access that arts practitioners often face when they become parents.

But the group is also learning how to become more inclusive, and probe what that looks like as they design another 10 years of theater for New Haven. Currently, a majority of its members are white—a fact that Alderman said she thinks about often. In Exchange, the company sought to broaden its scope by collecting community stories around the city, partnering with Baobab Tree Studios and collecting stories at neighborhood festivals, Tower One/Tower East senior living, the New Haven Museum and other spots.

“By talking about it, you start investigating how you’re doing it yourself,” Alderman said. “Who you’re including and who you’re not including.”

As they move forward with the show on Camp—it won’t be a biopic, Alderman said—they’ve also zeroed in on masculinity and entrenched sexism in their own company and in their city. What does it mean, for instance, that New Haven is implicated in a sport responsible for head injuries, systemic racism, and domestic violence? What does it mean for a woman’s voice to tell that story instead of a man’s?

“I would say what we’ve gotten really good at is sitting in the discomfort,” Alderman said. “We’ve gotten better at it. We know that we’re gonna come out on the other side of it, we’ve just gotta get through it and keep working towards it.”

“Every time we do it, it’s another invention for us,” she added. “And using New Haven’s history for that, it gives you focus. It grounds you. And then you can go anywhere.”

For a sneak peek of the concert, check out the video below: