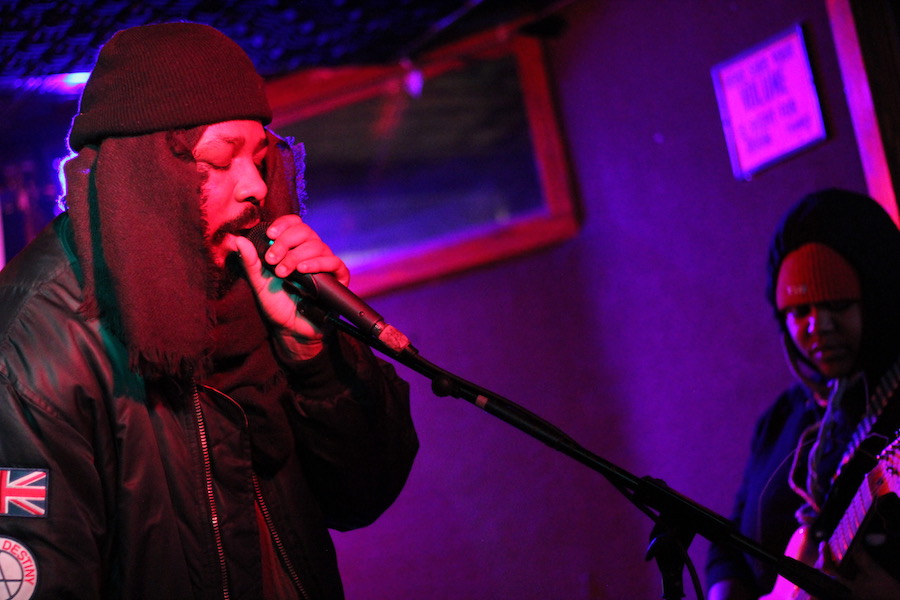 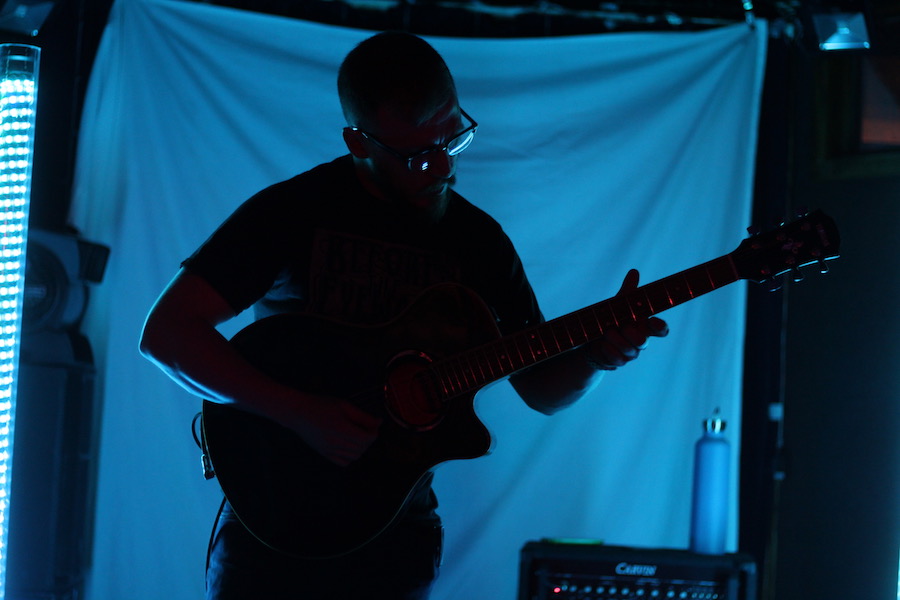 Looping guitar that made the audience feel ready for a long, cozy winter’s nap. Synth and soaring vocals that harkened back to video games, then turned up the volume. And some freestyle with lyrics warm and winning enough to ward off the dropping temperatures outside.

Monday night, that was the scene at Cafe Nine as three local acts kicked off March with neither a bang nor a whimper, but a danceable and mellowed-out groove. The event joined a string of free Manic Mondays concerts dedicated to local artists. A small but enthusiastic crowd came out for the show.

As temperatures fell outside the Crown Street bar, Milford-based musician Matt Streit took the stage as The Forest Room, a one-man project that has been in the works and evolving since 2004. 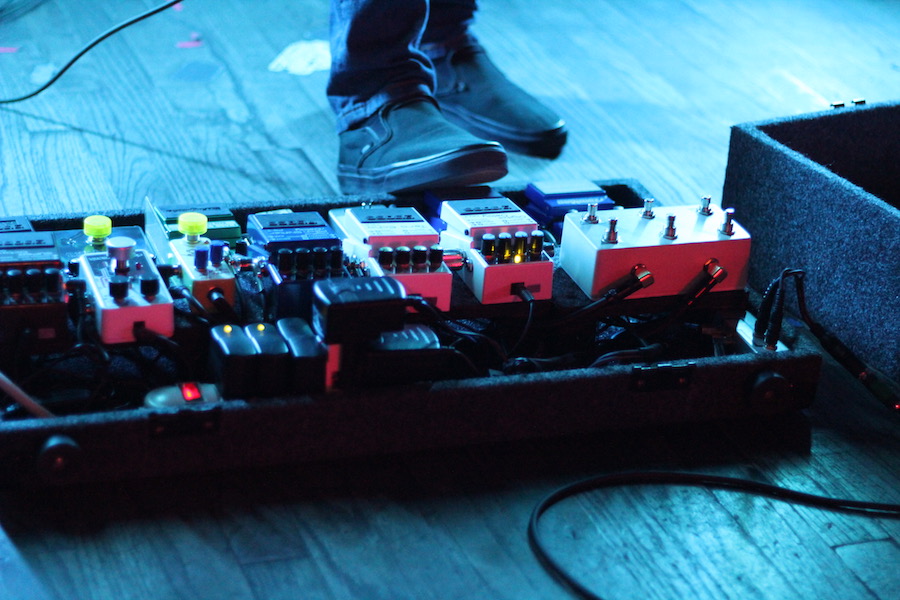 With a cluster of looping pedals at his feet, Streit soaked the bar in sound. Two flashing columns of light changed color behind him, turning the stage from pink to blue to a sky-tinged white. A white sheet draped along the back of the stage blinked in bright color.

Around the room, attendees still shaking off the cold closed their eyes and took in the music. A few moved in toward the front, adding aggressive head nods and knee bends to the mix. Streit smiled at them, motioning for them to huddle as if they were in on some secret.

“This song is for grandmothers, because grandmothers are actually kind of cool,” he informed the crowd.

Ears pricked up at a few high-top tables around the room. Back onstage, Streit bent almost all the way over his bass, and let out a loose, reverb-drenched riff that seemed to have very little to do with white-haired old biddies and members of the AARP. If you closed your eyes and imagined your own grandmother, though, it seemed like she was definitely dancing. 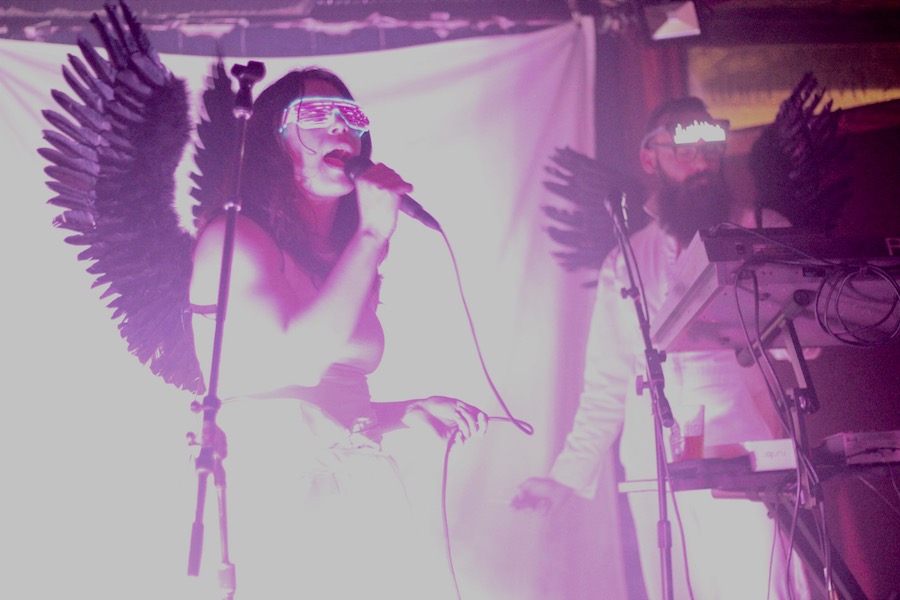 Streit set the stage for Falconeer, the project of Möbius Striptease’s Gil Morrison with appearances from Liz “Biz Ricardo” Richards. As Morrison assembled his equipment, the sheet behind him blinked to life with blocks of primary color, as if a computer was trying to assemble an image and couldn’t quite get there. A burst of smoke billowed up from somewhere on the stage, passing through a shaft of light that turned it orange.

Falconeer’s sets, soaked in synthesizer, 80s pop, and quirky video game references, are meant to get one off their butt and dance. As the sheet’s blocky design switched to a strobe-y, dancing set of lines, a few of the band’s new fans scooted back to the front, raising their arms above their heads and bumping hips as they shed layers.

Morrison, who gave birth to the project two years ago, is a lot of fun to watch. Taking the stage in a white jumpsuit, he donned a pair of thick LED goggles that danced in time with the beat, sprays of light coming and going as the music dropped. True to his namesake, he added a pair of massive black wings, shrugging his shoulders comically as he danced to himself.

He became a shape-shifter: an old-school DJ taking himself too seriously, high-energy synth doctor for a bad case of the Mondays, club rat having a nearly obscene amount of fun. Back in the audience, members of the crowd were getting into it, necks and shoulders loosening as they began to move.

Then Biz Ricardo took the stage, and kicked the volume up a notch. Pulling the mic in close, she loosed an explosion of sound from her throat, her voice rolling from the front of the bar to its every nook and cranny. Often without any words at all, her voice wove between the synthesizers, challenging them to duels and often winning. She stayed in constant motion, rocking her hips from side to side in a matching white jumpsuit and black wings. Loud whoops of approval came from the audience.

They were still going for The Quest Presents, a collaboration among Connecticut-based musicians Mooncha, Markdamighty, Chef the Chef and DJ Fife, who was not performing Monday. All individual artists with their own separate projects, three of the four came together to jam, shaking off snow and cold for time to play around with drum and guitar, see what lyrics they could tease out together. Chef the Chef greeted the crowd, then eased into the set with a kind of loping beginning of the final act.

“It’s gonna be different this time/this time,” he sang at one point, the refrain becoming meditative. In the audience, a handful of people who had stuck around moved in closer. Members of the band furtively nodded to each other. Not everyone was ready to go home yet, and that was just fine with them.