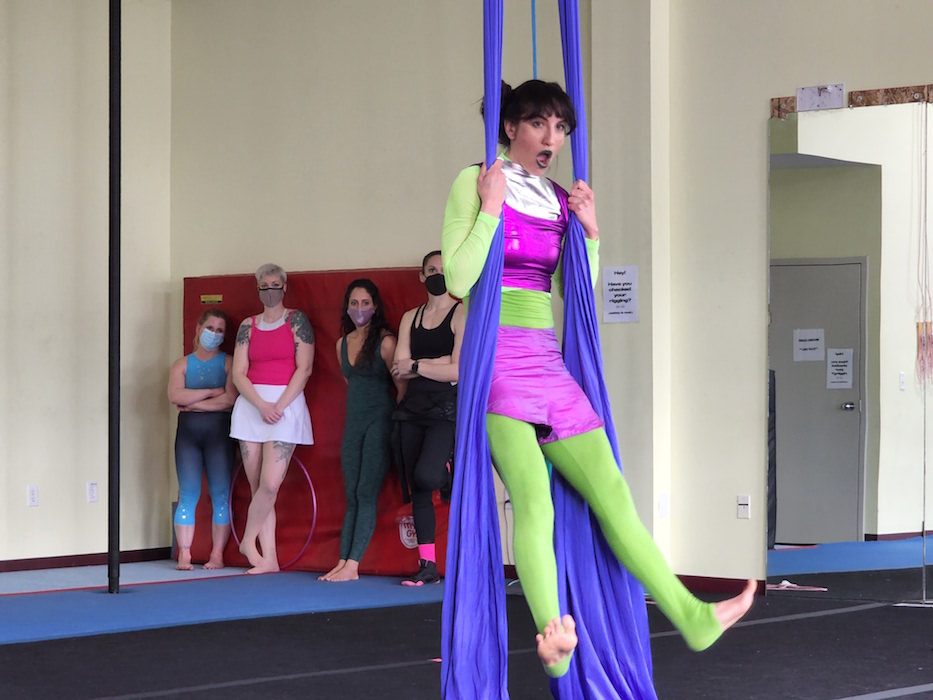 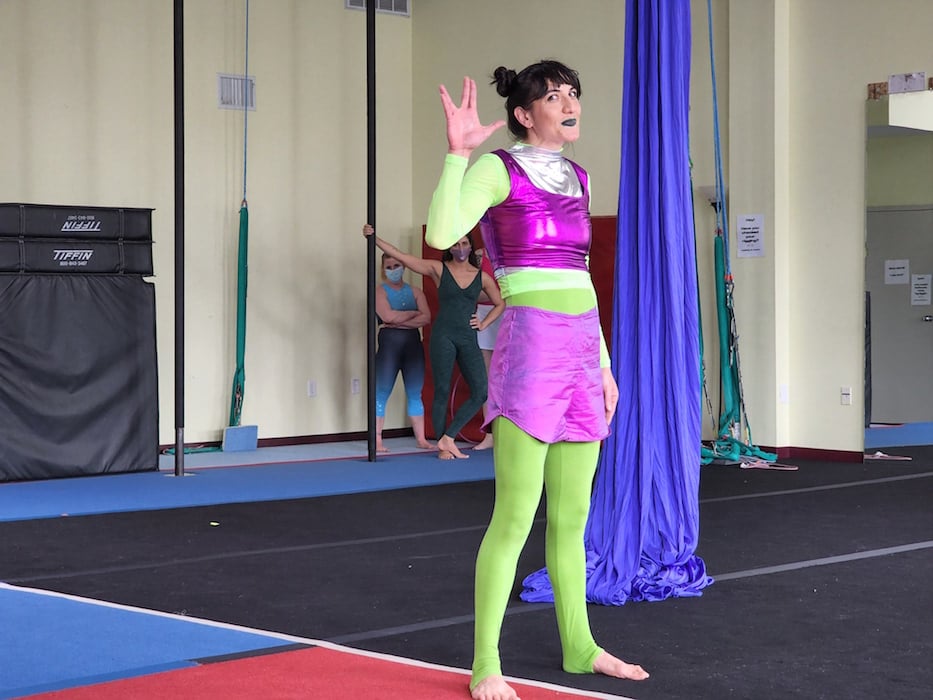 Members of Air Temple Arts sat on the red, blue and black floor mats, running through their routines even as they chatted with each other. Kate Gonzales-Gilligan stretched out her legs as her mind jumped through her aerial hoop routine. Nicholas and Stacey Strange snuck in a glance at each other, and the tambourine-flecked downbeat from their number all but floated through the rehearsal space. Dani Bobbi Lee shape-shifted from an alien back into an artist.

All are part of Air Temple Takes New Haven, an exuberant, sweeping and literally uplifting staff show from Air Temple Arts that marks the group’s return to indoor performance for the first time since June 2019. This Saturday and Sunday, the show will grace the arts hall at the Educational Center for the Arts at 55 Audubon St. in New Haven.

Shows are March 26 at 5 p.m. and March 27 at 1:30 p.m. Tickets and more information are available here. Proof of vaccination or a negative test is required. 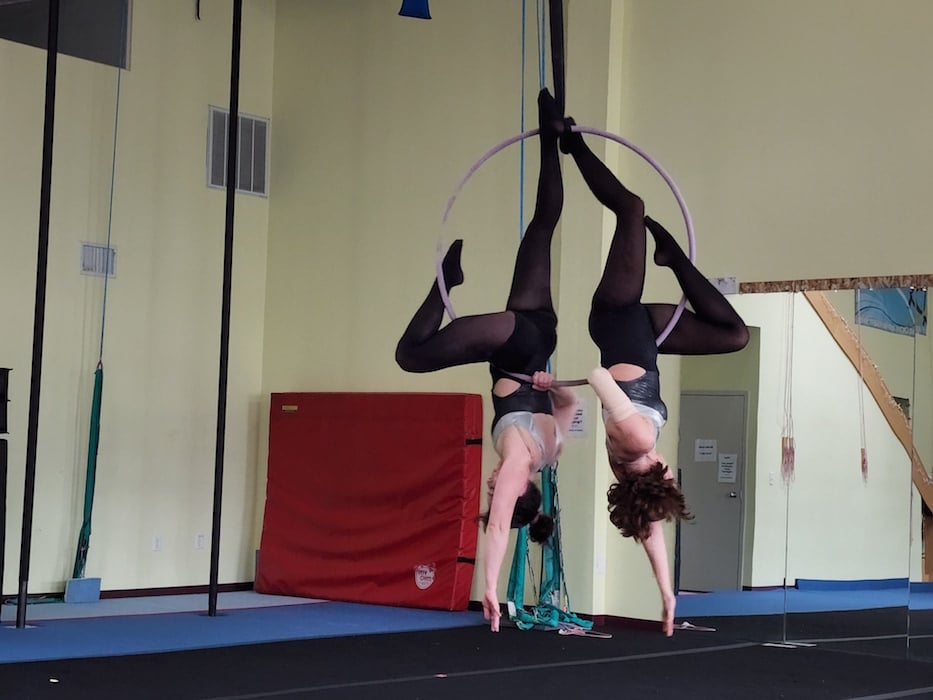 The show is “a celebration of circus and a celebration of our community and our coaches who have, you know, stuck with us through all of the pandemic,” said Air Temple Founder and Creative Director Stacey Strange. In particular, it showcases staff who have held onto aerial artistry for the past two years, from experiments in outdoor performance to a show based on the Donner Party’s ill-fated journey West. Routines fit staff member’s personalities—some are more serious, others more fun, and some dive into their weirdness.

The performances are sandwiched between a cast opening and closing performance to show how they work together and who they are apart.

It has been a long time coming. Roughly a year ago, Strange decided that she wanted to have an indoor show, she said at a rehearsal Sunday. At the time, Air Temple Arts had been doing performances in the parking lot outside its Woodbridge studio. Strange chose a date that felt far away, with the hope that the pandemic would look very different than it did in March of 2021. Her patience paid off: restrictions and case counts are lower than than were a year ago. Schools are open; in-person entertainment is more common.

For some of the performers, it is their first indoor event in years. Strange said that despite nerves, crew members still gave their all to the performances in rehearsals. As the director and choreographer for the show, she has also experienced anxiety around remembering how to put on an event inside an enclosed space with a stage. 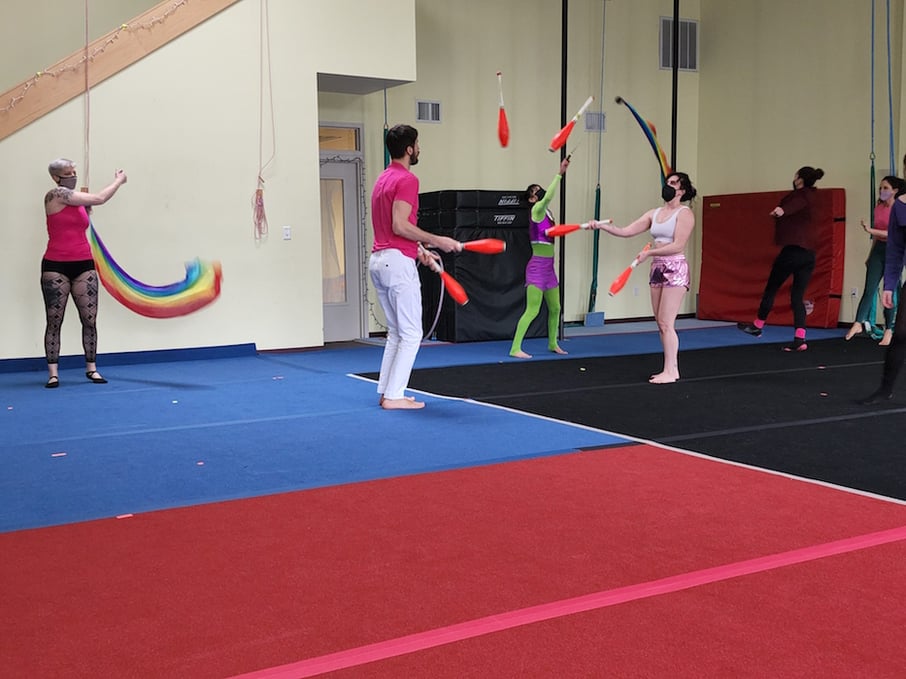 “I used to go through this process all the time,” she said at rehearsal Sunday. “Sometimes three times a year. And I have just been like, ‘Do I remember how to do this? How does this work? What am I forgetting?’”

Sunday, performers ran through routines that jumped from earworm-worthy Taylor Swift and Imagine Dragons to Billie Eilish. In matching black and silver outfits, Stacey Strange and Kate Gonzales-Gilligan started with one performer on the ground, and one already in an aerial hoop. In time with “How Not To Drown,” their bodies flowed into the hoop, and they took time carrying each other.

Legs intertwined, then stretched out to face the walls of the studio. Their faces appeared statuesque, full of emotion and focus but soft and delicate at the same time. By the end, they had traded places, with one performer still on the hoop and the other back on the ground. Even in rehearsal, the display of trust was mesmerizing.

Lee, who became co-owner and executive director of Air Temple in 2021, walked briefly into the “audience” and became a quirky alien with a long and convoluted backstory. Wiggling her arms up and down, she made her way from person to person, trying to mimic their expressions. After one interaction, a look of shock appeared on her face. After another, dissatisfaction.

In her universe, aliens believed that earth was no longer a stable environment—because of humans. But she still believed in the good of humanity. And she was trying to figure out a way to save it.

Stepping back into billowing, blue aerial silks, Lee-as-alien brainstormed while performing. She lifted herself, and continued trying human behaviors that might stop those on her planet from destroying the earth. When she landed on a behavior that felt right, a smile appeared on her face.

That magic extends to many of the acts in the show. Rehearsing to Lana Del Rey’s “Season of the Witch,” Crystal Cassetori appeared as a sensual and smiling witch on a metal half-moon, moving onto it with an ease that didn’t give away the still-newness of the routine (a program note revealed that this is her first routine on an aerial half moon). 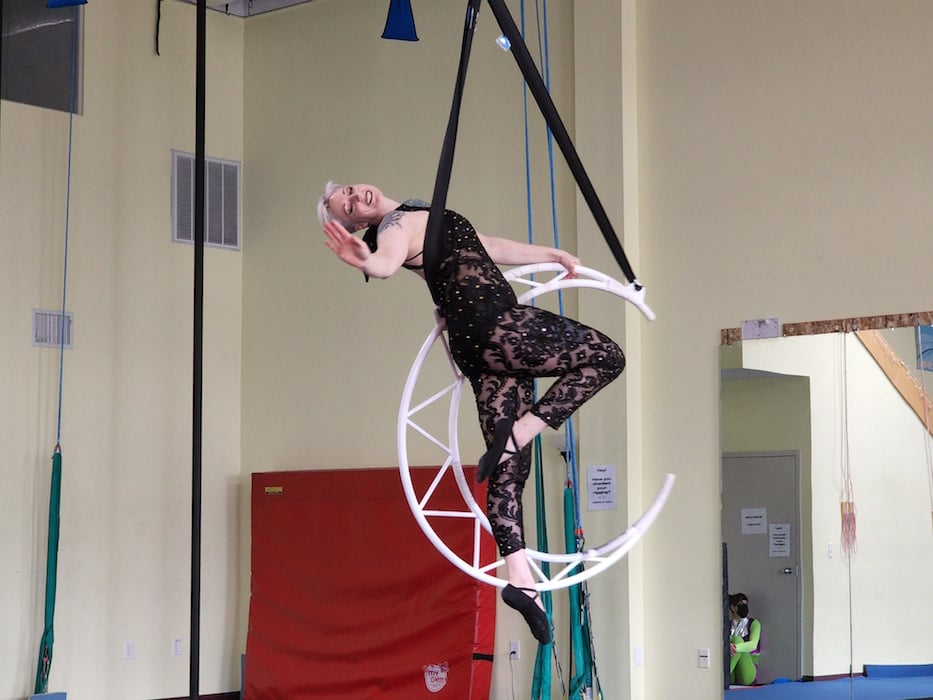 Covered in a cape from head to toe, she sat sideways on the half moon, shrouded in mystery. Slowly, she took off the hood, showing her face. She lifted her feet higher, removing a hand from the cape to expose a lace bodysuit beneath. As the cape dropped within an inch of the floor, she tilted her head back and posed, gently caressing the cape in her hands.  In the audience, her enjoyment of ​ every move, every limitation broached, every awe-inducing trick was palpable.

Even as Air Temple returns to in-person performance, members are keeping caution in mind. Strange said because performers are guests at ECA, they are allowed to set their own rules for Covid guidelines. They have chosen to have the audience wear masks and show proof of vaccination or a negative test. The performers will be unmasked, just as they have been while rehearsing.

“Our number one goal with this show is to like, just make sure everybody has a really great time,” she said.

Shows are March 26 at 5 p.m. and March 27 at 1:30 p.m. Tickets and more information are available here. Proof of vaccination or a negative test is required.