Alana Ladson Paints Through the Pandemic 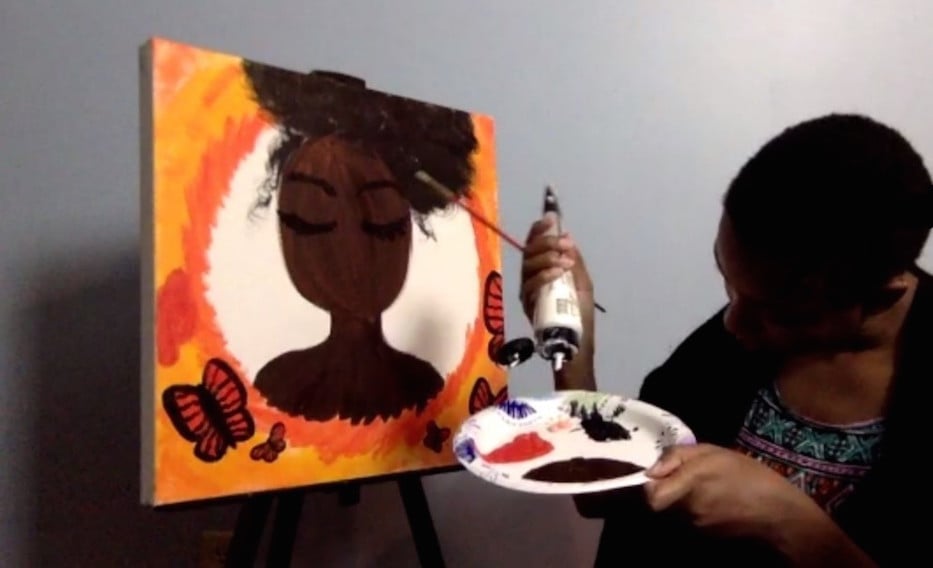 It’s the dark of night. A lone screen illuminates the room in a blue glow. Through computers, eyes watch a woman sit in front of a blank canvas. Lucky Daye’s dulcet tones dance in the air. She’s an artist—you can tell by the curved way she grips her brush, how she dusts acrylic on eggshell white, creating life out of nothing.

That artist is Alana Ladson, a painter who is also known for her role as youth operations coordinator at the Yale Peabody Museum of Natural History. Last week, the lifelong New Havener was one of over 40 creatives to participate in At Home in New Haven, a citywide virtual stage founded by Anthony Allen, Emalie Mayo, Hope Chávez and Paul Bryant Hudson earlier this year.

When Ladson isn’t making art, she is facilitating the EVOLUTIONS Afterschool Program (EVO) at the Peabody. This spring, she got involved with At Home in New Haven through Hudson, a musician and artist who she has known for 15 years. In a recent interview, he explained that one of the program’s goals was to give local artists a stage when many of them are suddenly out of work.

“These are folks who make a livelihood outside of institutional, traditional, or professional spaces,” he said. “Even the barriers around navigating things like the unemployment application for someone who makes their entire living outside of that world is huge. Artists have found themselves, not for the first time, and not for the last, in a state of absolute crisis.”

Hudson added that Ladson's artwork gives him an acute sense of her personality. While the two have been friends for over a decade, he knows her partly through her craft, which he greatly admires.

“It speaks really clearly for her, and I really appreciate and value the intentionality around that,” he said. “The things she creates are really beautiful reflections of her, and I think that speaks to me. I love to see my friends and people I know and appreciate walking in their absolute truth.”

Ladson’s truth speaks clearly to not only Hudson but to multitudes in the city, where she was born and raised. In 2016, the artist displayed her solo exhibition Queens at the New Haven Free Public Library. She has also showcased her work with New York’s Young Brown Collective and sold pieces with Yale’s African Student Association, the New Haven Night Market, CURLFEST NYC, and Ankara Bazaar NYC. 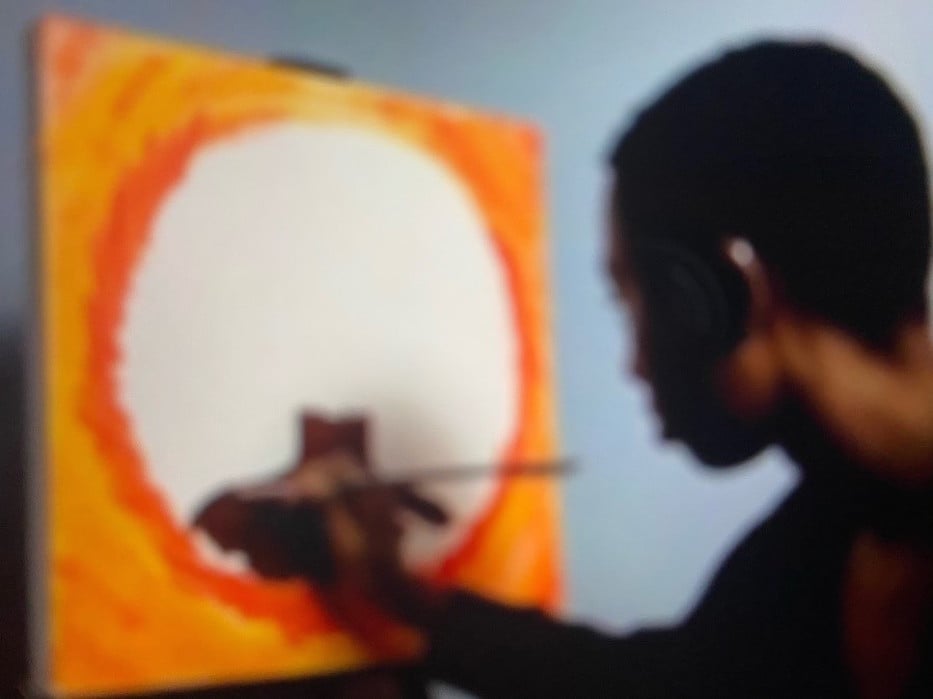 Ladson’s biggest artistic inspirations stem from black women and nature. As a child, she chafed at the the lack of pictorial representation she saw around her—no images truly delineated her lived experience. These frustrations persisted into adulthood. The absence of black women in art—the absence of herself—fueled feelings of hurt and insecurity.

Ladson explained that she wanted to see “more women and more melanin in these soft, vulnerable positions.” Her art creates what she never found.

That approach extends to her professional work. Every year, she organizes an exhibit for her students at the Yale Peabody with that same practice in mind. In 2018, she helped curate Ladies First, an exhibition of women of color in science, technology, engineering and math, or STEM. She said that she wants viewers of her work to come away with the same new realization—that they too can have a seat at the artistic table. She hopes people will see her work and “feel seen.”

Ladson currently instructs EVO programs through her computer screen; when COVID-19 enforced closures hit New Haven in March, the Peabody closed its doors. She misses her students’ presence. She worries about the New Haven creatives that she sees struggling financially. But she also described the extra time she has to create as “my silver living to come out of this mess.”

Wednesday, she brought that verve to her class, an hour-long live painting demo beamed out to Zoom screens around the city. As she was settling into it, she explained that she wanted her viewers to feel a sense of inner peace and tranquility.

Quiet R&B and Chillhop flowed through the space. Warm light illuminated the canvas and her lithe figure. While Ladson later said that she was anxious, it didn’t show: She flashed a smile at her camera, gripped a brush between her index finger and thumb, and struck the canvas with a bold stroke of paint.

“When people look at my art, what I want them to see is calm, peace, beauty, relaxation,” she said. “The idea is to look at it and think ‘hmm,’”—Ladson stretched her body back and closed her eyes—“that’s really nice.” 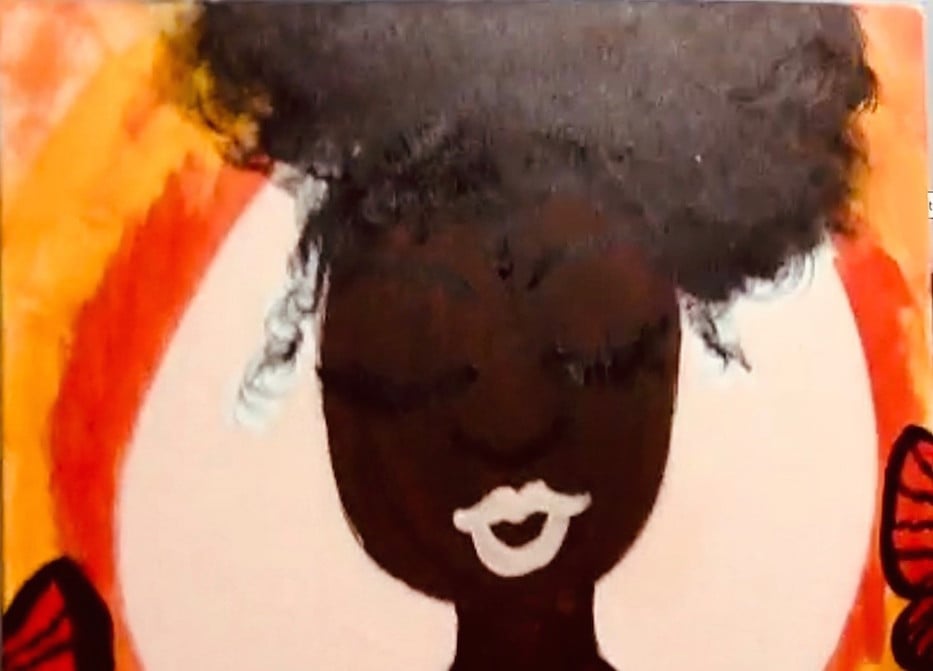 As she painted, a form began to take shape. She swirled her brush in water then dipped it into brown acrylic. Brush hit canvas—it was a bust of a woman, dark-skinned against a white backdrop. Creamy pink formed large, smiling lips. A fan brush doused in black fashioned a tuft of hair. Ladson detailed monarch butterflies at the painting’s edge.

By the end of the session, she had forged a space for herself before viewers’ eyes. All proceeds from the demo went to the CT-CORE Mutual Aid Fund.

“I felt empowered,” Ladson said after the session. “I’m used to live paintings. It was a little different not having people bunched up or just around, that common peek over your shoulder, but I didn’t mind it … live painting is always fun for me, whether it’s virtual or in person. It’s just fun to see something come to life on something that used to be blank and white.”

“Suddenly, it’s full of color and has meaning," she added. "It’s beautiful. Hopefully, everybody will have taken something away from it.”

In the future, Ladson wants to develop both her digital and traditional art in hopes of illustrating a children’s book and becoming an animator. Recently, she was accepted into Cartoon Network’s mentorship program “Black Women Animate.” She attended last October in LA.

“It was the coolest experience ever, and it nailed down that I want to do art for the rest of my life," she said. "So, whether I’m animating, painting, illustrating, or all of the above, it’s happening, and I’m never letting it go.”