A Set in the Garden of Eden 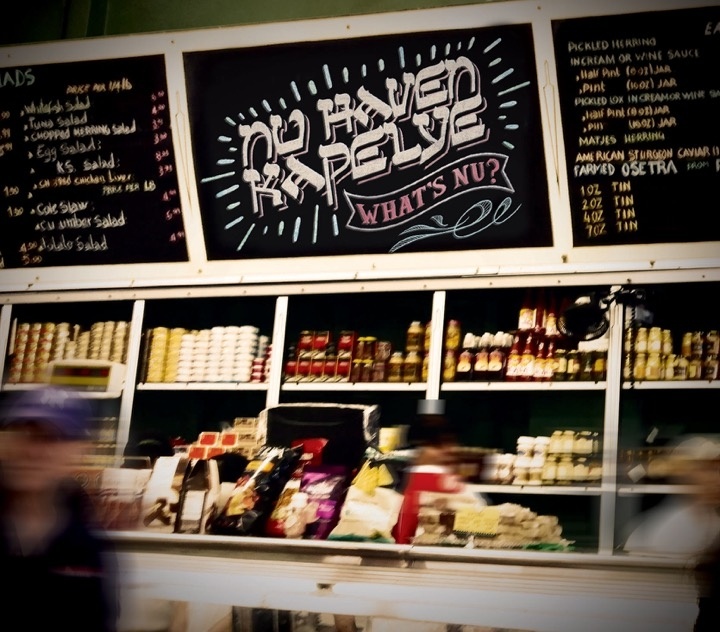 Making music is a great way to feel my cultural identity in ways I don’t get from going to a synagogue. I’m always reaching out for new people to play! - David Chevan 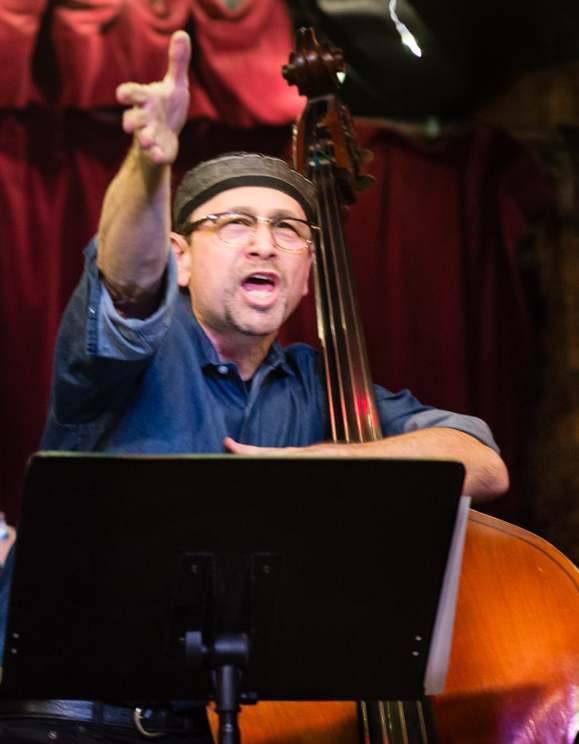 David Chevan’s klezmer jam ensemble reached over their folding stands and across each other, swapping sheaves of sheet music, strategizing. Voices stacked up on top of each other.

Let’s finish with ‘If I Were a Rich Man!’” one cried out.

“Who’s been soloing?” said another.

Tuesday night, the nine-member group gathered at The Outer Space in Hamden as a part of a semi-monthly session series, bringing with them Yiddish tunes and Ashkenazi swing on accordion, bass, drums, flute, guitar, alto and tenor sax, trombone and violin. Although most of the performers came from Chevan’s great, big band, The Nu Haven Kapelye, klezmer jam is a teaching platform open to musicians of all denominations and training. This session came between Yom Kippur and Sukkot, the Jewish Day of Atonement and harvest celebration.

“Making music is a great way to feel my cultural identity in ways I don’t get from going to a synagogue,” Chevan said after the evening’s set. “I’m always reaching out for new people to play! It’s a little missionary, but not in the sense of converting the heathens!”

He liked how people who were not Jewish and who knew nothing about klezmer came out of curiosity, stayed, and enjoyed themselves.

Bassist, composer, and faculty at Southern Connecticut State University (SCSU), Chevan encourages musicians to not simply prepare klezmer only from Romania, or only out of Moldavia. “That’s great if you’re playing in a museum,” he said, but not for a broad, general public—not at a bar. “A lot of the songs that we did come from all over the region.”

Chevan led the group in danceable wedding arrangements like “A Night in the Garden of Eden,” timeless melodies plucked from the ether. He performed titles like “Our Ancestors, Forty Thousand Years Wide,” as well as Russian “folk” ballads written first for theater and memorably rewritten for a Soviet cartoon about a talking crocodile-concertinist.

There was also the occasional entr’acte joke: A rabbi, a cantor, and a janitor all prostrate themselves before the altar.

“Save the people from my stale sense of humor,” Chevan exclaimed. “I told this to a class, and nobody got it!” 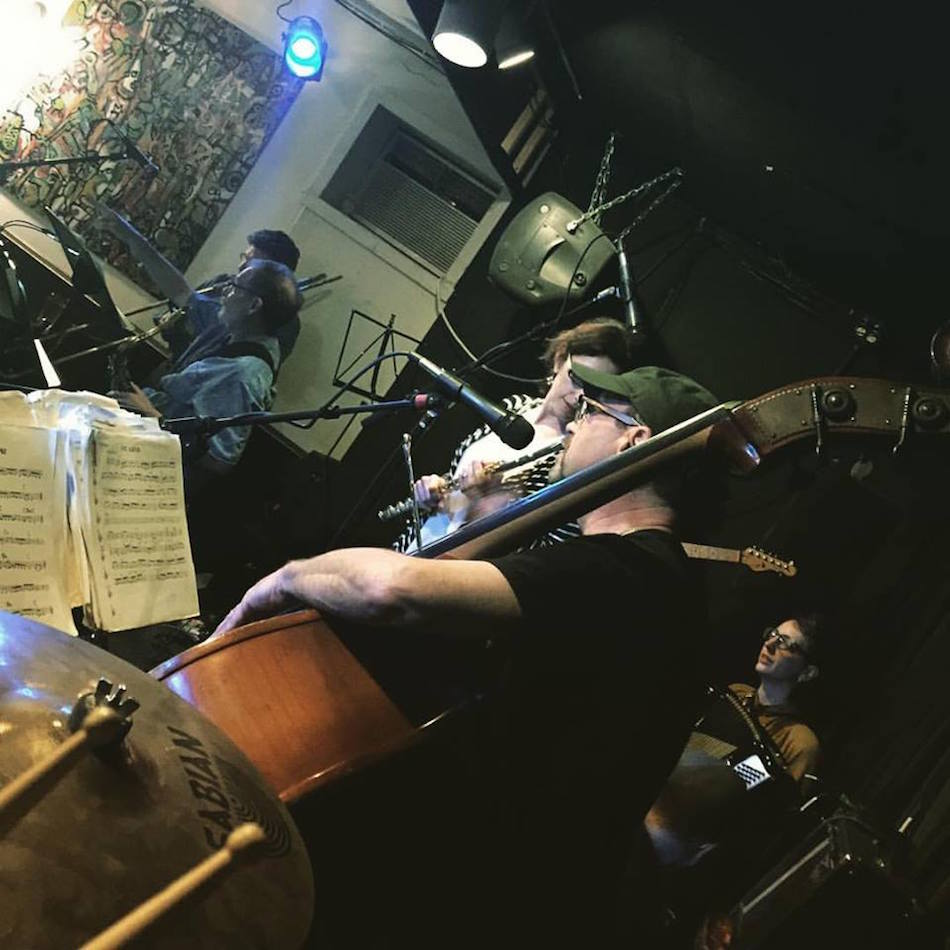 The view from the stage. Jay Miles Photo.

Some of the klezmer numbers began with belted vocalizations. Their alternating yai and dai monosyllables—strung out in breathless, up-tempo lyrics—established the song’s melody. These foundational notes would be repeated and embellished a half-dozen times by instrumental solos from the brass like Isiah Cooper and Dalton King or Anna Reisman on the flute.

Other tunes started up with sober, mournful doina duels between bass and accordion that opened into rollicking, breezy, full-ensemble statements.

Chevan explained one of these doina duets with accordionist Dana Astmann simply. “I’m gonna give her a lot of D minor,” he said, leaning into the microphone confidentially, “and she’s gonna gimme a lot of D minor back!”

Astmann’s accordion oozed around Chevan’s much louder bass. The accordion’s singular tone carried clearly and consistently as the bass swelled and faded away and swelled forth again. Chevan’s bass bowing had a slightly electric twang. It grinded, growled, and reverberated meditatively, tingling the spine.

The duet ended suddenly in a flurry of movement. Chevan flung his bow into back the black holster at the foot of his instrument. He whipped up the band and began coolly strumming away—a performance consistent with his role as director of SCSU jazz and blues groups, contributor to world-beat, soul-fusion group The Afro-Semitic Experience.

“I’m not a purist,” he confessed later. Before the audience, Chevan claimed that when he’s researching an addition to his repertoire, he tends to imagine it as live music at his forefathers’ pub in Lviv, Ukraine. The dive vibes aren’t altogether anachronistic.

Chevan paused to introduce the set’s next piece. “This is my favorite song about incest!”

“How many do you know,” asked a few folks in the crowd.

“This is the only one I know. It’s also my least favorite song about incest.”

Taken from a 19th century melodrama about a brother and sister who think they’re siblings but fortunately learn they’re unrelated, the music pines, moans, and groans. Like all “good” songs about incest, Chevan said—his tongue planted firmly in his cheek—it’s a waltz.

“Let’s get it oo-on,” an audience member rumbled in a sultry, back-of-the-throat baritone.

“No,” Chevan insisted, all facetious exasperation. Not yet! For the intents and purposes of his song, the protagonists still have to be blood relations in our minds.

He turned away from the ballroom, straightening his face, checking over his notes, locking gazes with the players.

“So, we’ll do sections,” Chevan murmured to the band. “AA, BB, CC, you know? We’ll give everybody a little space.”