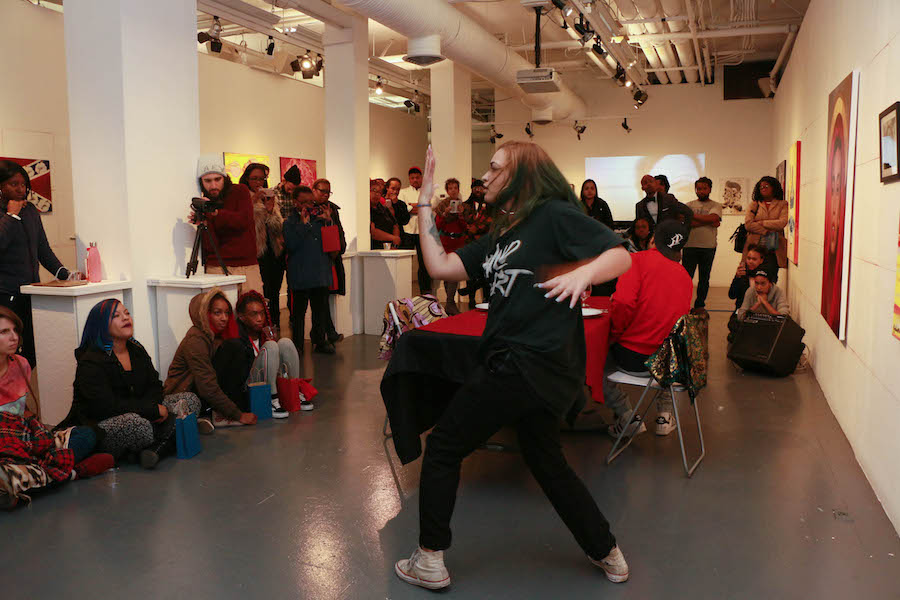 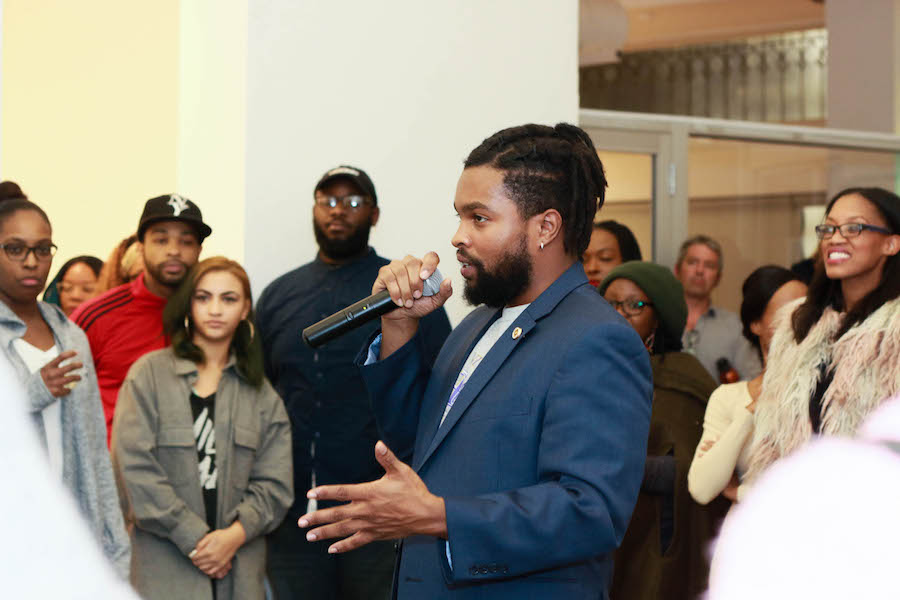 Sculptor Kyle Kearson brought a chair to Artspace New Haven Friday night. A bottomless, open-frame iron throne to represent his seat at the table—for an exhibition of the same name.

Seats at the Table—the first in a series of art events intended to convene majority-black audiences around Connecticut in the coming year—took place Friday night at Artspace in the city’s Ninth Square. The show and its accompanying performances were organized by The Lineage Group. The LG seeks to “highlight experiences across the African diaspora” through art, culture, and youth entrepreneurship. It is known especially for its annual Kuumba Week.

The evening featured song, poetry, puppetry, all variety of visual art, contemporary and hip-hop dance and step. This event, which took its name from the 2016 Solange album A Seat at the Table, inaugurates the LG’s new four-part RevA.A.R.T.lution program. 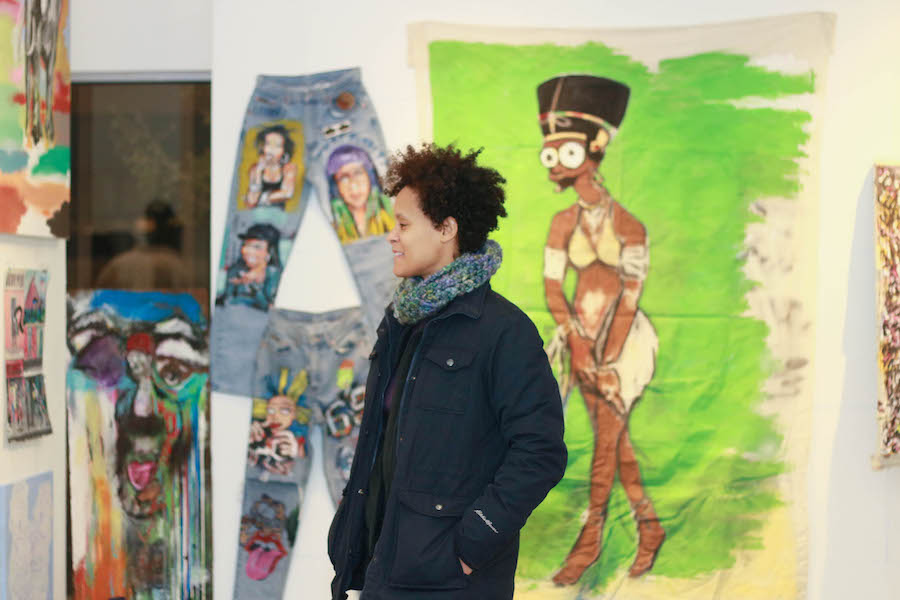 “We want to elevate black artists,” announced LG founder Malcolm Welfare in his opening remarks. He called upon visitors to Artspace to not just look at the objects on the walls: if they liked it, they should put a down payment on it. “We want to ensure that our artists have a support network in this great arts city.”

In a way, the A.A.R.T. in RevA.A.R.T.lution—“altruistic ancestral renderings of truth”—belongs to a long line of double-a acronyms for the betterment of black culture: Chicago’s Association for the Advancement of Creative Musicians (A.A.C.M.), the N.A.A.C.P. among others.

Kearson’s chair, however, is something that literally lacks the “support” of which Welfare spoke—it is a seat at the table without a seat, and a symbol for the status quo The Lineage Group pushes against. A recent sculpture and ceramics BFA out of the University of Connecticut, Kearson “completely manufactured” each part of the work. He selectively oxidized the metal bars with salt, vinegar, and hydrogen peroxide; he burnished and brushed the steel by hand. 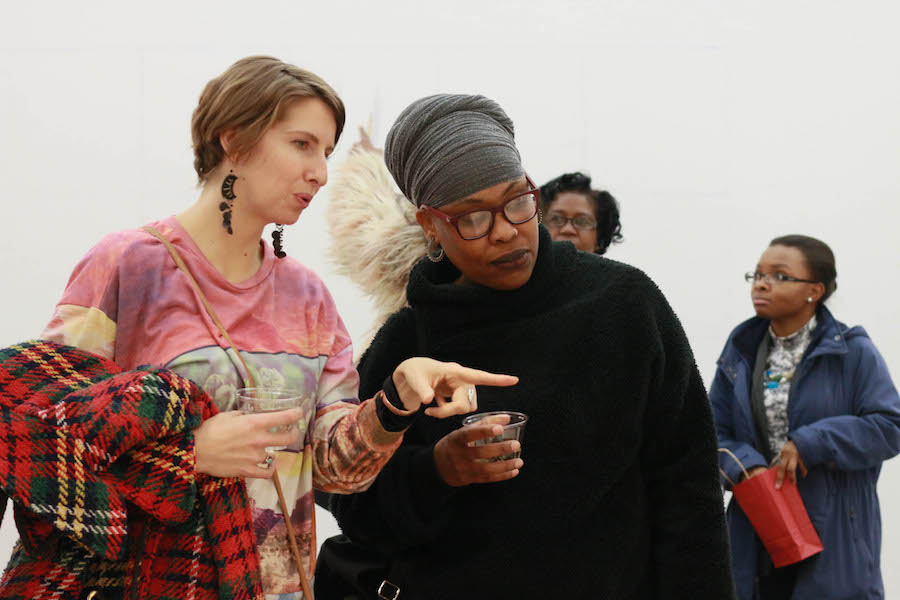 Kearson didn’t work from an actual chair, but from “what I assumed to be the typical dimensions of a chair.” He applied his full range of talents as a sculptor to create a broken thing from a model that doesn’t exist. The chair is a malicious investment of time and energy, not unlike like the futile racism that cuts the cushion out from under people of color in the United States.

Kearson suspended chains from grisly, soldered-on hooks to serve as the chair’s back rails and the front and rear sides of its apron. Installed in the gallery on Friday, the chair’s chains made negative space an active ingredient in Kearson’s art, trembling with the breeze of the HVAC and shaking in the steps of each passerby.

“I could have just made this with straight bars across,” Kearson said. But he wanted a visual citation of slavery that would repudiate “the prejudiced tactics” of “white supremacists.”

“We are revolting against the isolation, the silence, the special categorization of black artists,” Welfare said in an interview later that evening. He was still sweating gently from his stepping routine, his blazer shed to reveal a purple Omega Psi Phi t-shirt underneath. The fraternity brothers’ energetic high-kicks and jumps had brought down at least one framed photograph and left a second painting hanging from a nail 20 degrees off the level, to the surprise of the crowd. 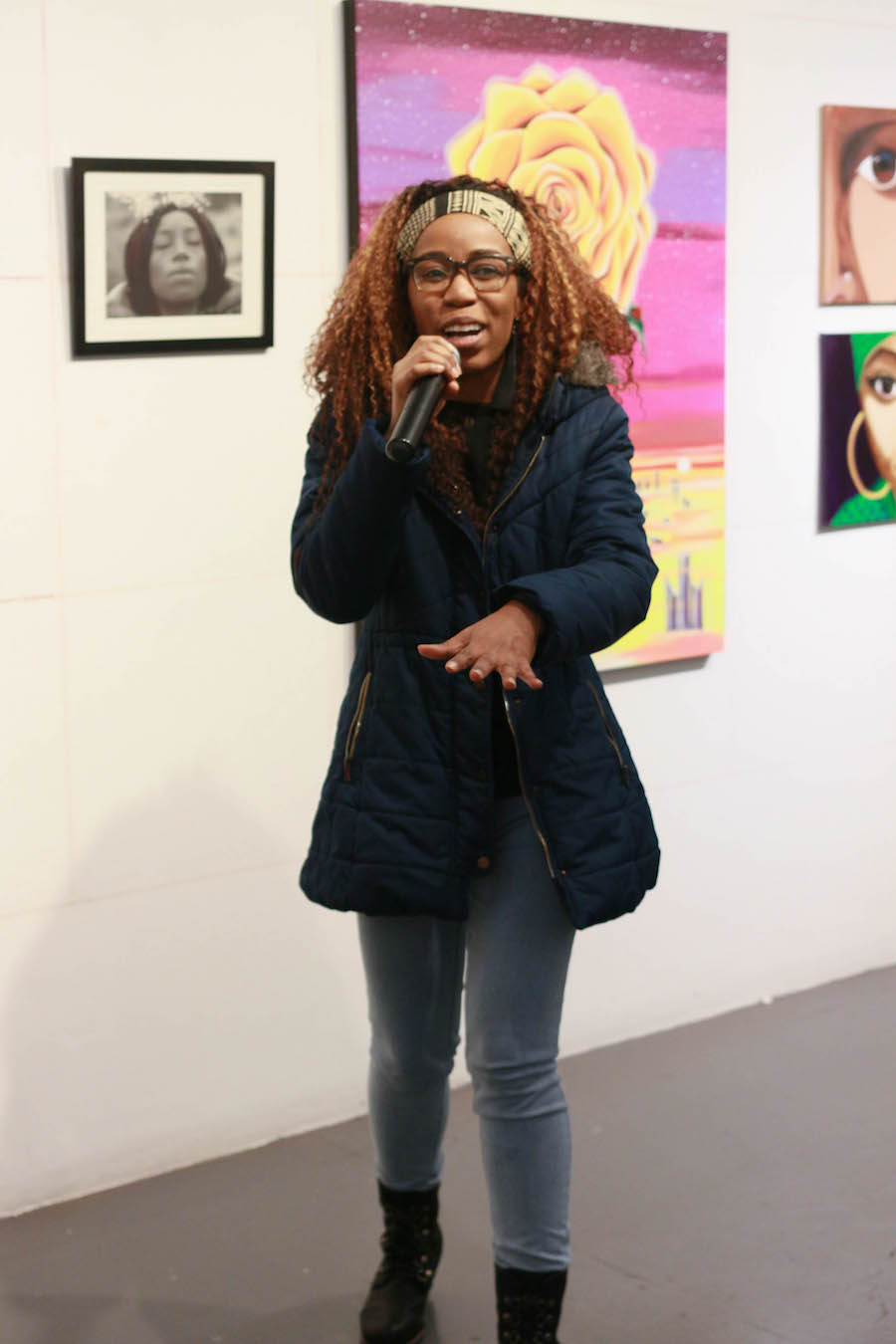 An educator in New Haven Public Schools by day, Welfare related how he regularly hears discouragement from creatively-minded students who either don’t believe there are outlets for their ambitions or don’t believe those outlets belong to them.

“But there is space for that,” he insisted. “There are opportunities for that!”

Emcee Bivens worked tirelessly to indicate to Seats at the Table guests that the wellsprings of black culture ran swiftly and deeply in the tri-state area—way deeper than the night’s jam-packed run-of-show. Between performances, she got the scoop on an author’s upcoming book, an NYU urban planner’s thesis. She nosed out and uncovered the rappers and slam poets in the crowd: secret superheroes.

“Quartz put out an album and she wasn’t going to tell us,” Biven tsk-ed good naturedly to one shy musician. Bivens then gave up what might well be the show’s thesis. “No matter who you are—we gonna’ come up and find you!”

RevA.A.R.T.lution recognized, however, that visibility and publicity could only go so far. Audience education was as important as the economics of art. Welfare plugged the companion reading lists The Lineage Group hoped to create before each RevA.A.R.T.lution event, but he appeared to be more interested in the stereotypically stony, stoic hearts of his fellow men.

Welfare, Lineage Group co-founder Faith Lorde, and curator Ariel Herbert worked in moments for all-audience reflection as well as gendered men’s and women’s discussion sections. The womanhood group was facilitated by Rhoena Ma’at of Redfeather Wellness and Empress Ayana of ONYX Restorative Justice—certified health consultants and sexual assault advisors whose practices helped “reintroduce women to themselves” in the “Me Too” moment.

Welfare led the charge with a male group. “Let’s have a discussion of what’s on our mind,” he began.

The men had just gathered together after watching a puppet show by another recent UConn grad, Isaac Bloodworth. Bloodworth’s performance began as a side-scrolling children’s book narrated to the upbeat bars of Miles Davis’s “So What,” but it ended with the grainy CCTV footage of Tamir Rice’s murder dubbed to Billie Holiday’s “Strange Fruit.” It happened to be “Strange Fruit’s” second sobering cameo that evening.

“Watching a video of someone getting shot is not natural,” Bloodworth admitted, a little drained. The talk swung from how to address this pervasive stress, to actually healing New Haven’s black community, to finding the right places to begin that work. It is toxic and tiresome to be the only person of color in most rooms about town, several attendees said.

“No offense to white people,” commented one participant, “but I’m around white folks all day.”

Another, a recent resident of West Hartford, spoke about how he just moved to New Haven precisely because he was sick and tired of not seeing people like him at bars and the suburb’s other public venues.

“We were in a sea of white people,” added a third attendee with a similar experience, “and it wasn’t until college that I knew how brainwashed I was.”

Welfare cut in and plugged “art as a vehicle for change.” Seats at the Table brought these men to the table, to share their feelings in a gallery filled with their peers. Bloodworth noted, however, that Welfare and The Lineage Group still had some work to do before the RevA.A.R.T.lution was complete. 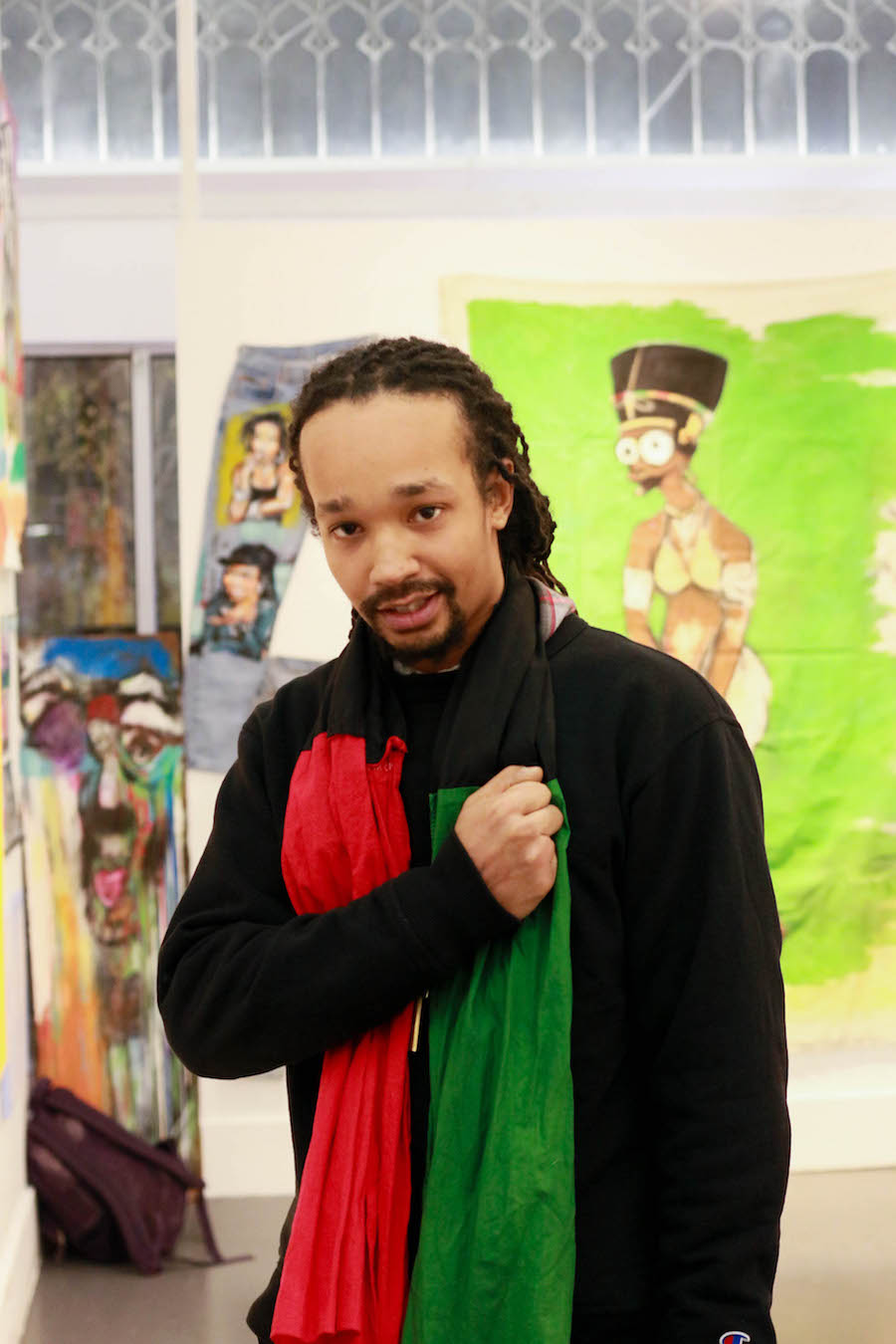 “I would like to see people from Newhallville or Dixwell come here and feel comfortable. Bring that booginess down a little bit,” he said with a chuckle.

Romantic stories and dancing dinner dates picked up where these intimate conversations left off. Poet-minister King Obayigo Brown told all how black power was black love:

Black love is like when you let your natural hair grow,
like wearing locks, braids, or just letting out the fro
Black love is when all gangs unite
And stop settlin’ beefs with guns, but with fist fights.

Some in the crowd might have squirmed or giggled a bit when Brown told how he bit the lips of his poem’s interlocutor in a kiss, because “sometimes pain is pleasure.” On the whole, though, King Oba offered exactly the kind of frank, unselfconscious disclosure Welfare wanted.

“I think black love is good for our health,” Brown hypothesized, mid-stanza.

Muata “Madd_Moses” Langley and Melissa Diaz repeated in the sign-language of movement what Oba said with the spoken word. They popped and locked in from the edges of a candle-lit table for two, gliding into their seats at this table and bouncing back for another round of hip-hop promenades.

Langley caught Diaz’s limp body with a palm in the small of her back, reanimating her with a push forward that clipped the edge of the tablecloth and rattled the cutlery. They took mincing salsa steps in place, raising their fists in a Panther salute.

The two finally settled down to their meal, having exchanged their upper garments for stiff tunics of shiny, varicolored broadcloth. They joined hands in a prayer, or blissful mindfulness—Diaz’s chin up and eyes closed, serene as a red-gold, cinquecento icon of Solange hung on the wall behind her.

An Afro-Latina Bronx native now settled in New Haven, Diaz described how Puerto Ricans struggled to identify with the culture Seats at The Table showcased.

“They try to wash out our black heritage,” she said. “But I embrace who we are!”