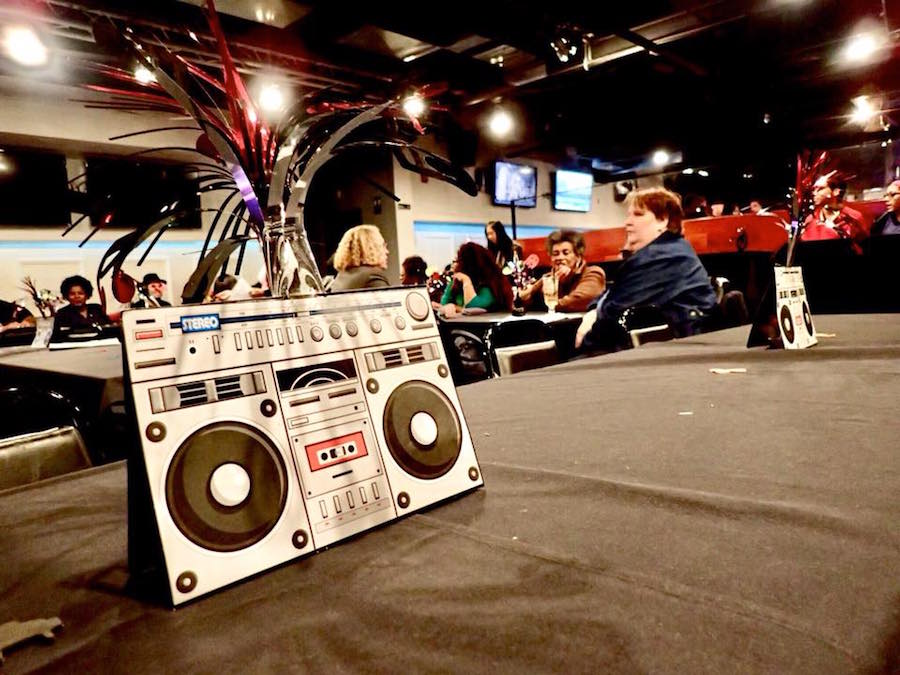 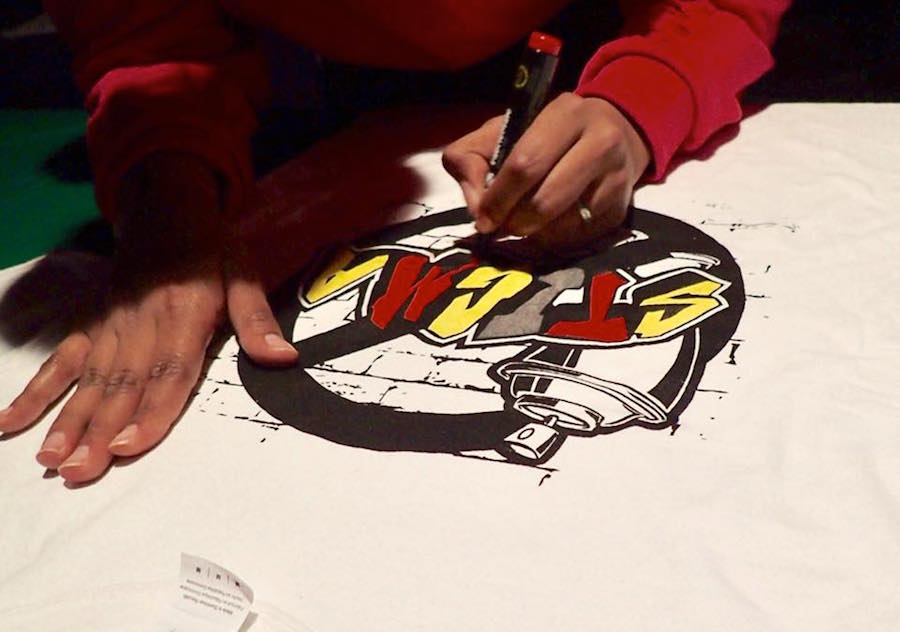 “This is going to be a little spicy, a little humorous, but very real,” she said.

Friday marked “Boogie For Awareness,” New Haven's World AIDS Day party and the culmination of a week of panels, rallies, fundraisers, and film screenings in support of New Haveners living with AIDS.  Sponsored by the Mayor’s Task Force on AIDS and held at Terminal 110 on Long Wharf, the retro-themed celebration featured a polaroid picture booth, t-shirt crafting activities, and a Soul Train dance line. 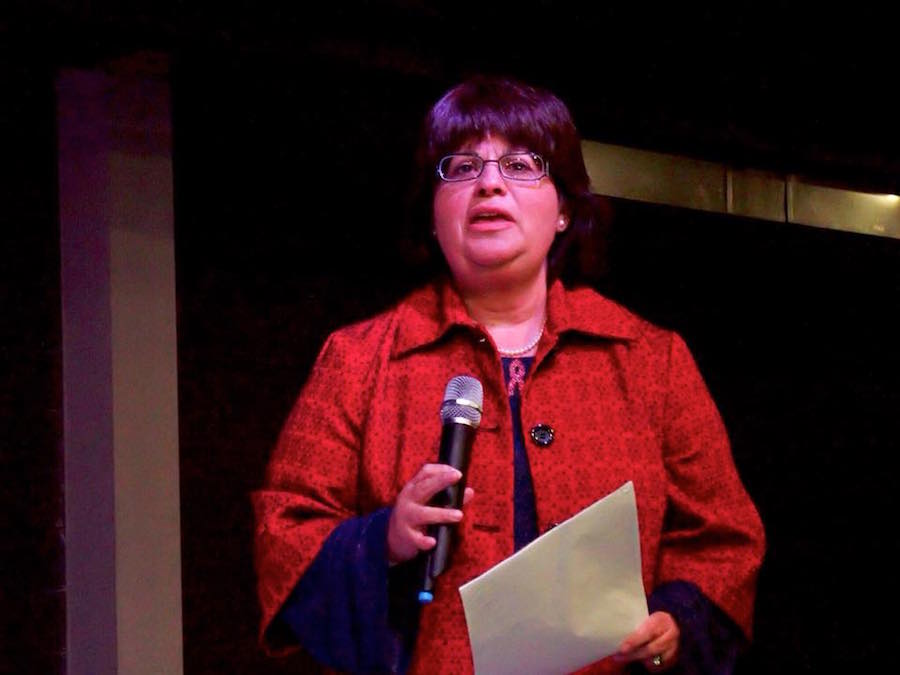 There was also time for remarks from figures in the city’s HIV/AIDS and LGBTQ community, as well as a bit of oral storytelling from Danvers, director of the AIDS Education and Training Center at Yale School of Medicine.

Danvers, herself a woman living with AIDS, gushed about her main man in shining armor—a cream-colored AZT pill that fit in the palm of her hand, its coat embossed with a prancing steed.

“It looked like the celebrity medication they were showing on TV,” she recalled. “They looked just like the capsules on TV! We were mesmerized.”

Her relationship with the sexy white knight AZT, however, didn’t last for long. Their breakup was the starting point for a long, storied history of failed romances on the pharmaceutical scene.

“I wouldn’t date another medication until 1994,” said Danvers, explaining how she fell next for the antiretroviral D4T. After Danvers dumped D4T, “my choice of eligible dates vanished,” and she had to put up with some sordid new bachelors.

“Like with any relationship,” Danvers explained, “you have to take the good with the bad.” One drug asked her to “drink gallons, and gallons, and gallons of water.” Another was like a “moody boyfriend.” If she washed it down with something too cold, the pill would catch in the back of her throat and nearly choke her. If the meal she ate before taking the medication was too warm, the drug would fall apart in her stomach. 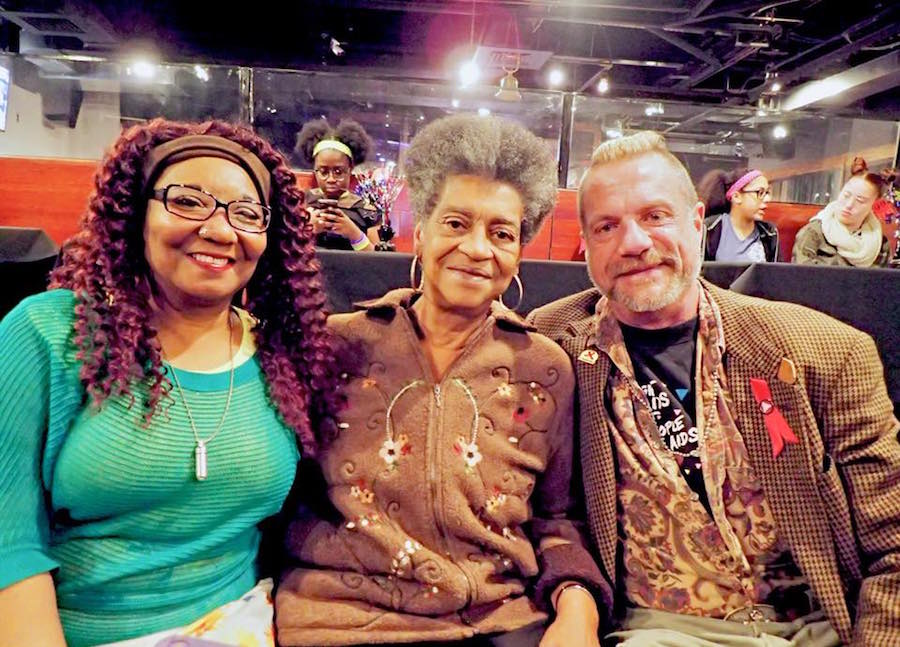 She looked up from her notes, pausing to check if everyone understood her story’s basic metaphor. “Is everyone getting this—?”

The crowd gave a unanimous, “Yeah!” Terminal 110 was apparently a Broken Hearts Club on World AIDS Day. Danvers continued on to describe her hunt for true love: detailing the foursome between her, carbohydrates, a vintage pillbox, and yet another medication; glowing about how she imagined her latest squeeze to be a lady.

“I have been in a relationship for so long,” Danvers concluded, “I can’t remember being single.”

Kyle Rodriguez from AIDS Project New Haven and resident HIV physician Dr. Christopher Alonzo reminded people that they had wingmen in New Haven’s hospitals who could back them up, date after date.

“Take a look around the room and appreciate each other,” Rodriguez said, crediting the long-term advocates who had put in work for 10, 20, 30 years at a time. Alonzo asked his fellow doctors to help replenish those ranks.

“We need to get ourselves out of the clinic and into the community because that is where we can make a difference, and lobby!” 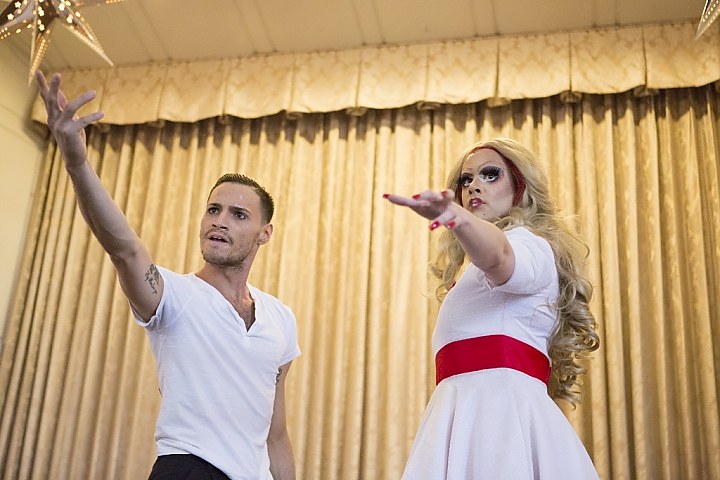 Luis Antonio and Kiki Lucia earlier in the day on Friday, as they performed a new work about HIV/AIDS awareness at the 37th Arts Awards.

“Which is a very heteronormative, old, white audience,” Antonio said.

Antonio seemed to regret that “they scared a lot of people,” but felt certain “that’s what we can do to keep the movement alive…pushing us all to do better to address this ongoing crisis.”

“The most important thing we can do,” Antonio said, “is to live our lives and live them well.”

He unknowingly provided the rallying cry on the dance floor that night.

“Let’s enjoy life,” howled one attendee tapping out a cha-cha, flagging down the crowd, waving folks onto the stage. “We can do this!”

“Show us what you learned at Alicia’s House of Salsa,” echoed the emcee. “Come on, now: I know we have more people who know how to do this!”

Many of the party guests were still hard at work on their t-shirts. The Mayor’s Task Force had provided boxes of white garments, emblazoned with a puffy black decal of a spray can crossing out the word “stigma.” Every square inch of available workspace was in use, as participants colored in the design with fabric markers and Styrofoam plates of screen-printing paints. They hunched over the broad, flat bannisters of the platform where the evening’s teaching artist had set up shop, blank shirtsleeves hanging down.

“Come on, give me two lines,” the emcee asked again. “You got to go down around one time—don’t try to sneak out that door!”

The Soul Train gradually took shape. Its two parallel rows of eight to twelve dancers faced one another. Participants two-stepped left and right with a clap in unison to the rhythm of The Commodores’ “Brick House.”

“Hey, come on ‘Run DMC’—you hangin’ on the wall,” the emcee called out, brandishing his mic at a dude in a fedora and black shirt sporting gold chains, his arms coolly crossed. “Come on people at the bar, come down and Soul Train dance!”

The dancers at the top of the Soul Train individually peeled off, running the gauntlet made by the train’s two rows. They freely improvised to chants of “Work that body, work that body!” and returned to the train at its tail end. Soon, everyone had gone “down around one time” and the Soul Train came to a halt. The crowd dissipated.