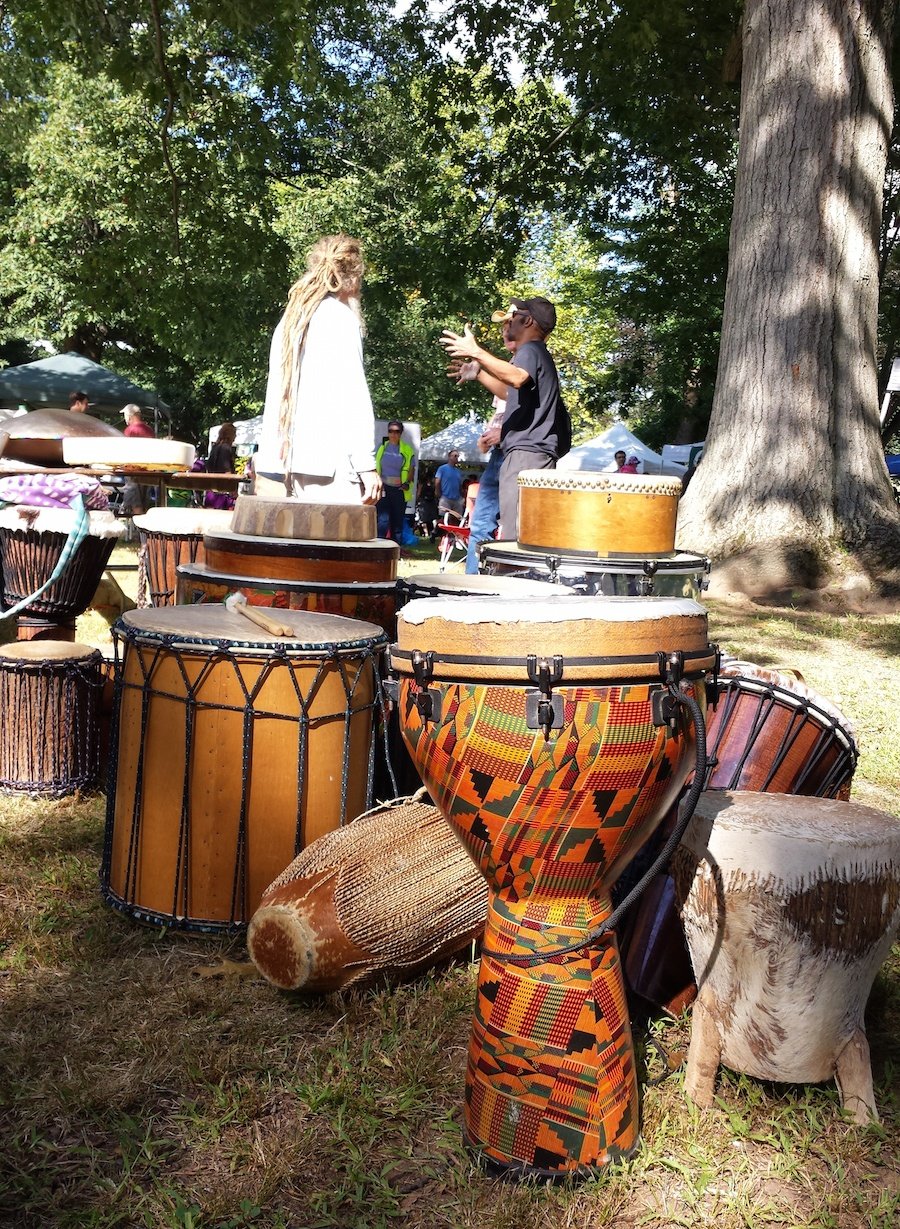 Singer-songwriter ThabiSA crouched low, training her microphone on the impromptu shaker solo from her toddler-aged son. He had gleefully rushed the stage moments before, and his face was now all concentration. His eyes settled on some vague, middle distance as he dutifully picked out the beat to “Pata Pata” by Mariam “Mama Africa” Makeba: the second-to-last song from ThabiSA’s early afternoon set at the CT Folk Festival.

Based in New Haven and born in Kwazakhele, South Africa, ThabiSA contributed one of several performances that sought to broaden the boundaries of “folk” at Saturday’s festival. Stationed at the NewAlliance Foundation Community Tent, ThabiSA magnetized families on their way in towards the Folk Fest’s main stage.

Mothers and children gathered around the fringes of the tent. One pushed her stroller in time with ThabiSA’s tunes, her head bobbing semiconsciously along. Another bounced her child in her arms, rocking on her heels to the rhythm. ThabiSA found herself surprised by a second guest artist, who gingerly waddled up and accepted the white, egg-shaped shaker from her palm.

“That was on point,” beamed ThabiSA, as he shyly broke away back towards the chairs and his parents. “Give it up for my little guest! That was right on the beat!”

In addition to uptempo covers of afropop, ThabiSA also sung original compositions like the melancholy but determined “Who do You Think You Are?” and energetic rearrangements of African folk songs such as “Vula” (“Nkqo Nkqo”). Each song was generously long—about eight to twelve minutes. ThabiSA allowed herself plenty of time to embroider on the refrains with slowly evolving lyrics, clever scatting, and some acapella percussive effects: “O-yo’s,” “ay’s,” “yeh’s,” and breathy, staccato “ah-ha-ha’s.”

Accompanied by Eric Rey’s congas, guitarist Josh Gleason, and Folk Fest volunteer and Wilbur Cross student Brianna Chance on flute, ThabiSA’s songs acquired some jazz vibes. She gracefully yielded to her musicians, who offered up inventive, improvisational solos as she sung anecdotal encouragement and appreciation. After the performance, ThabiSA commented that she was particularly impressed by Chance, who had only eight hours the night before to learn the day’s music.

Later that afternoon, while ThabiSA led families in a gumboot dancing exercise, master percussionist Michael Mills drummed up another crowd at the Community Tent. Scheduled for back-to-back workshops (“Healing Drums,” and “Journey of the Migratory: Cultural Music Folklore”), Mills enthusiastically flagged down visitors to the Folk Fest, inviting curious attendees who had been attracted by his big, monumental sound.

Mastermind behind the Drums No Guns Commission, Mills created a thundering, reverberating sonic spectacle that surely gave the audio techs at the Folk Fest’s main stage some pause. He gradually farmed out an endless ensemble of rain sticks, shekere, clappers and claves, improvised gizmos, and at least one, insistent Yoruba agogô.

With boundless confidence, Mills would lock his gaze on the empty-handed in the crowd, marching out towards them—an instrument in hand. Measuring his steps, he’d beat out the melody he wanted them to maintain, adjusting their grip and posture before handing the equipment off and finding another potential audience participant.

Every head he turned ultimately turned contributor—slowly layering up the complexity of his song, and increasing its decibels. Mills expertly managed the mass performance art, shaping the sheer noise into meaningful music with expansive, highly-legible hand gestures. He’d hold up two fingers, commanding the tent to play two notes on their respective instruments, and wave his arms feverishly over his head if he didn’t think everyone had it down on the first try.

Mills additionally led the crowd in lyrics. “I also need the boys who can sing in a mezzo soprano, an alto! But: We need the ladies, first,” he shouted, effortlessly projecting over the drums.

“I’ll sing it to you—you repeat!” Mills sucked in his breath, and let out a soaring call: “Na-go, na-go-oo!”

He listened to the response, head cocked. “Now help me out, because I’m going to have to tweak a little, here!” After a few tries, he was finally satisfied. “So take your breath, and hold on, we’re going to go into this rhythm from Haiti. I’m gonna’ count to three, and we’re gonna’ stretch it! One—two—three—!”

A tent packed with thirty to forty-five people—fringed with a double crescent of onlookers—held Mill’s whole notes as he whipped the percussion to a fierce crescendo. Though small compared to the New Haven Parks and Rec bandstand, the Folk Fest’s Community Tent had a big impact—making itself heard far and wide. Perhaps next year, ThabiSA and Mills will stand on that main stage, members of the CT Folk community in more than name.