Art Will Find a Way 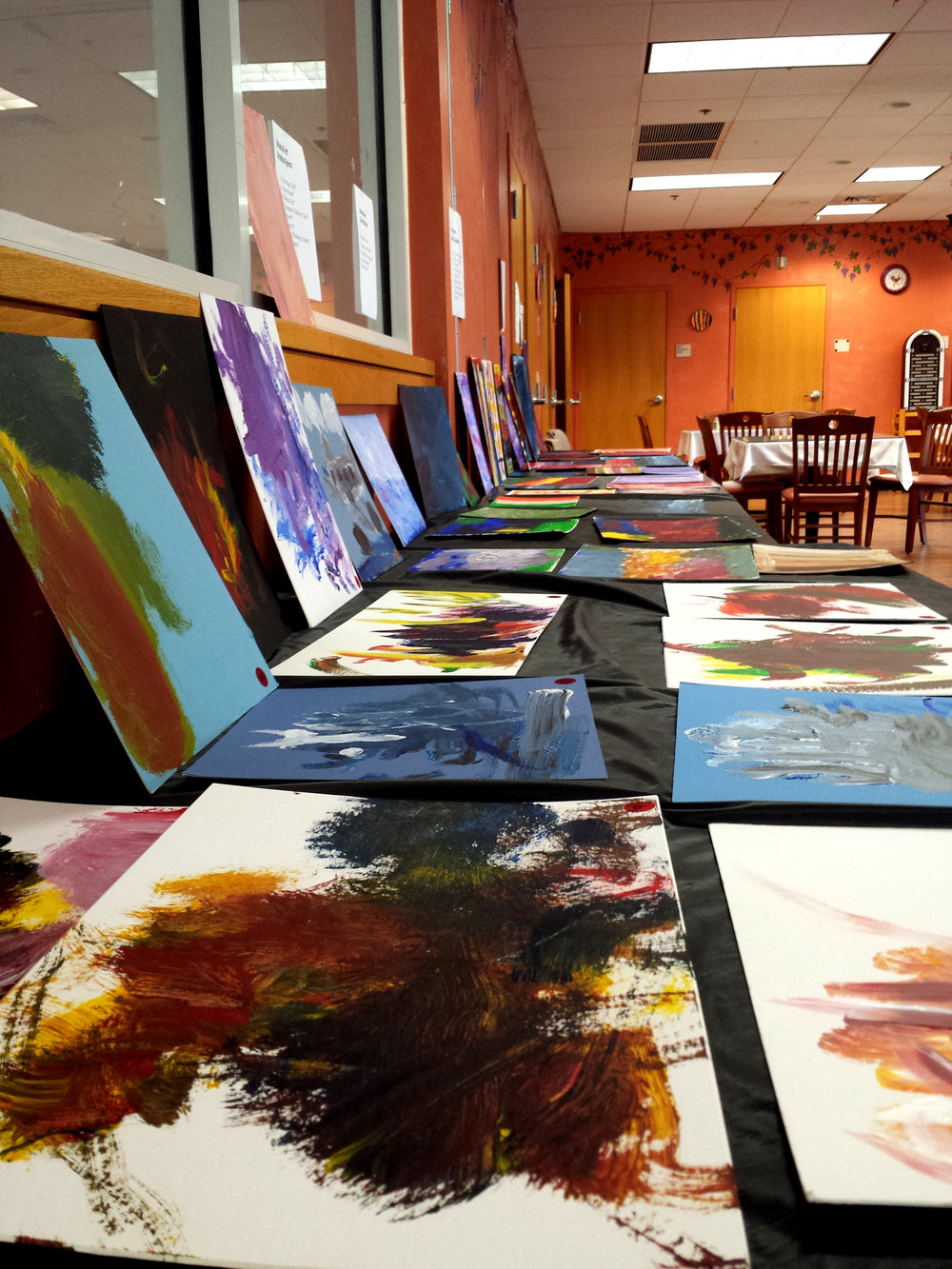 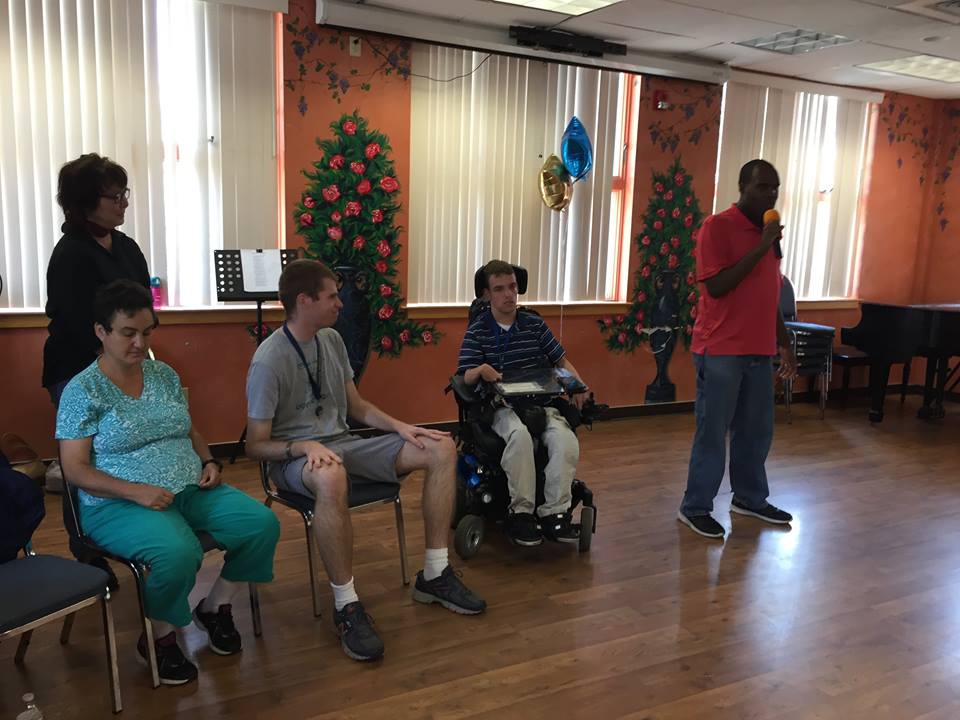 “The music that I am about to play represents a theme in each day of our Musical Art [class],” he said. He gestured to an array of brightly colored canvasses around the room.

These canvasses were on view as part of the center's Summer Student Art Show. Held at Chapel Haven’s Westville campus last Thursday, Burbank and his peers gathered to exhibit paintings, glass and ceramics, scrapbooks and photographs made over the past semester.

A wheelchair-bound day student at Chapel Haven and a singer with his University of Bridgeport chorus, Burbank had been appointed “Music Lord” for the day’s proceedings. He assembled a representative playlist for all the songs that served as inspiration during the summer’s various making activities.

A group of student performers had just finished covering several selections: pop standards like “Love Will Find a Way,” “Shadows of the Night,” and “I Believe I can Fly.”

Burbank now asked for audience participation. “I challenge you to figure out what the last song will be on the list,” he exclaimed.

“Wait: Whatever the song made you feel, you painted?” asked one audience member.

Burbank nodded yes. The crowd rumbled and murmured, slowly standing up and breaking out with curiosity.

Knots of attendees began to form around the exhibits, puzzling over the pictures, trying to guess at the connection that Burbank proposed.

Gifted with perfect pitch, Burbank said that he had responded enthusiastically to the inter-arts task proposed by Chapel Haven Art Director Tina Menchetti.

“My goal with the music was to time the painting with the music as closely as possible,” he said, directing me to one of his works, Honoring a Legend. Created in response to “Over the Rainbow,” Burbank built up a rosette of broad, loaded brushstrokes—each distinctly stacked, one atop the other—all set in a blank, white ground.

Its colors generally recalled The Wizard of Oz. Burbank mentioned the yellow brick road, first, identifying it as the painting’s lowest layer.

“I put in a little green for the Emerald City—and who can forget the ruby red slippers? Everybody knows it: it’s an American icon!”

He added that the title was intended as an homage to Judy Garland, and her classic performance as Dorothy Gale. 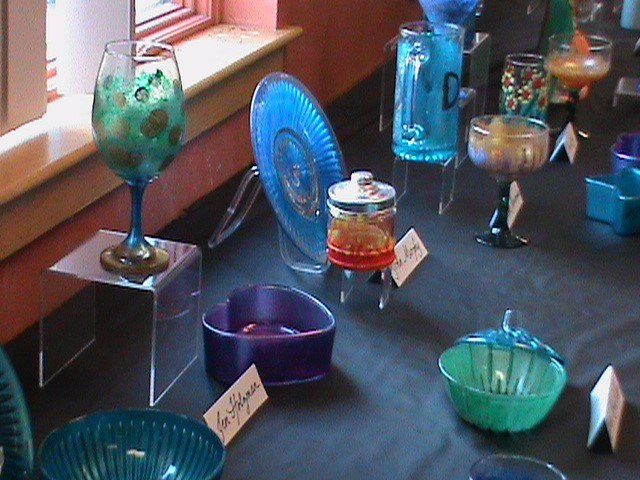 “He would beat on the canvas to the beat of the music,” Menchetti said. Blank swatches had been propped up to accommodate Burbank’s chair, and his hand’s range of movement. Her description of Burbank’s process—his vantage point over the canvas—helped explain the piece’s short, heavy marks.

“We discussed what you were listening to, what went into it.”

Menchetti has been with Chapel Haven for over 20 years. She was brought on as a ceramics artist, and has stayed since. Following the event, Chapel Haven's Vice President of Admissions and Marketing Catherine Sullivan DeCarlo called Menchetti's art activities "an integral part of Chapel Haven’s residential education and Asperger’s Syndrome Adult Transition curricula."

“I am trying to get more music into the program,” she said Thursday. Menchetti mentioned that Chapel Haven had recently invited a musician to do expressive drumming with the students.

Since 2009, Chapel Haven has partnered with the Yale Center for British Art (YCBA). Menchetti and YCBA Senior Coordinator of Education Linda Friedlaender continue to organize the “Out to Art” program, pairing museum docents with Chapel Haven classes for guided-looking activities.

With the day-to-day activities it represents, the Summer Student Art Show happens to be the tip to an iceberg of arts programming at the school.

“A lot of our students have career interests in those areas,” said Christy Chandler, Chapel Haven’s director of  admissions. She showed off artwork by the gallery-represented alumni Vito Bonanno, Audrey Kantrowitz, and Chris Murray installed in the school building, before offering a tour of the campus’s new Uarts making space.

“We owned this house, so it just made sense,” said Chandler. “It cuts down on the students’ transit time.”

Established about four years ago, Uarts partners Chapel Haven students with practicing artists, from master weavers to screen-printers. The program gives them a chance to gain a stipend as they sell their wares at local fairs and crafts venues. They design Chapel Haven-branded pride wear, create bookmarks and promotional material for conferences.

They even do a little upcycling: Chandler pointed out a wine-crate footstool and hinged storage bin, upholstered in a varicolored repurposed rag rug. She said that "students attend the studio like a job," working from 9 a.m. to 2 p.m.

Back at the exhibit, Burbank and his mom were at a loss for the last time he’d done any kind of painting. They settled on the 7th grade.

“He would come home every Thursday and be talking about it,” explained mom, gesturing at the art on display. “He wanted to give these paintings away, he wanted to sell these paintings!” She leaned in to tell a story. “His sister made a beautiful painting—an abstract painting of the cityscape of London. We framed it and put it in his room—” She paused.

“But: Personal art is still really great! Why do you have to only frame art from artists?"