Social Enterprise B.L.A.S.T.s Off At Career 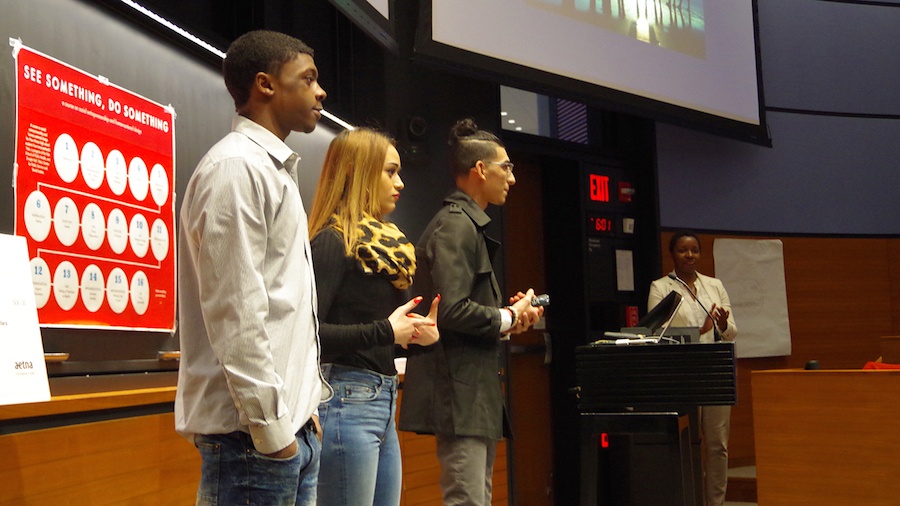 You could hear a pin drop at the Yale School of Management Friday night. The audience stood swaying, hands held ready for a rousing round of applause. It leaned in eagerly every time the doors peeked open to admit a straggling spectator.

The crowd was waiting for 13 students from Hill Regional Career High School who were participating in the “See Something Do Something” pitch-off. Sponsored by InnovateHealth Yale, Dwight Hall, and the Aetna Foundation, five teams would compete before five judges for a $500 check to grow their ideas towards start-up businesses that could serve the common good.

Dwight Hall Director of Innovation Oneyka Obiocha had just requested a standing ovation for the participants, getting everyone on their feet and at the ready.

“Over the past 16 weeks my colleagues and I had the pleasure to teach social entrepreneurship at Career High School,” he said. Obiocha said he hoped the students would take these learned skills and “their lived experience and use it as an asset in their community.”

“I would love if we could be relentless in our celebration of these young people," he concluded to the standing-room only lecture hall. "They are young people who are complex and who are loved!”

Students soaked up the literal limelight.

The evening’s panel brought together See Something Do Something program alumni (current Career senior Azhaleia Reyes), past Yalies (Fish Stark), and Dwight Hall’s so-called “Neighbors in Residence” (Sex Workers Access Network Founder Beatrice Codianni, Kim Hart, local musician and Sofar Sounds New Haven Director Paul Bryant Hudson). The judges smiled and cheered on the teens as they finally filed in. Some of the students seemed happily surprised; others completely owned the praise, soaking up their literal limelight as they crossed the bright lectern.

Nya Holder, Community Engagement Fellow with InnovateHealth Yale, laid out some of the rationale behind working with young people. Holder indicated that in previous years, starting out, she “had been so stunned by” their sophistication and passion. “They are the experts in their communities; they live in their communities,” Holder insisted.

The course, aligned with Career’s magnet-specific classes, began with one basic question: “What do you think of New Haven?” Holder reported that the students themselves checked off categories like “homelessness, poverty, guns, trash, and violence.”

“We took those answers and said: ‘What can we do about it?’”

An all-youth creative placemaking firm, a job training program in hyper-local apiculture, a criminal justice fact-finding mission based around storytelling—this was what the teens believed was possible.

Students Meridaliz Delima, Willie Gary, and Mykell Rivera presented on the latter, a violence-reduction project by the working title of “New Haven Leaders.” The trio proposed to rent out venues, convene listening sessions, and document the lives of the formerly incarcerated towards breaking cycles of recidivism and critiquing unfair, nonrestorative sentencing.

“We want to be able to ask them questions and figure them out,” said Delima. “Why do they want to rob? They have a family to maintain, so they take the easy way out.”

“It would be different if we talked to the prisoners,” Delima emphasized, “because they’ll see that we—we look up to them.” She told how the team’s own friends were “every day not making the right decisions” and opting for expedient but increasingly illegal choices. There was genuine sympathy, kinship, and affiliation on their end.

The panelists pulled no punches once the team had yielded the floor to comments. 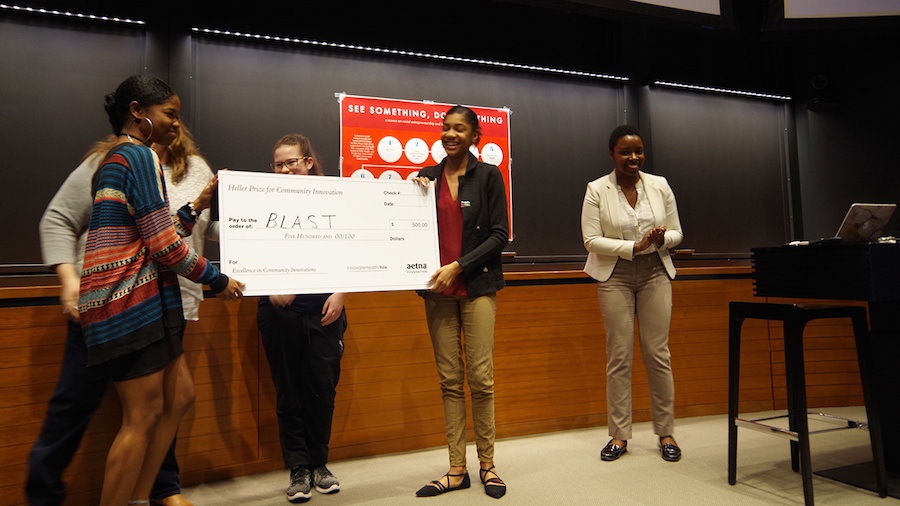 “Language is important,” warned Beatrice Codianni. Board member of the National Council for Incarcerated and Formerly Incarcerated Women and a 2017 Leading with a Conviction Fellow, Codianni had taken a dim view of their blithe use of the label “prisoner.” She urged them towards alternatives.

Drawing on her time in the Latin Kings, Codianni also suggested that their decision to partner with the law-enforcement initiative Project Longevity was pretty ill-considered.

Every single team presented a raft of these outside contributors. Columbus House, Connecticut Department of Housing, Downtown Evening Soup Kitchen, Trinity Church on the Green: the teens apparently learned the lesson of leveraging New Haven’s many public-spirited agencies.

“Your community partners are great,” said Kim Hart of team “Fight for the Homeless,” represented by Robert Franklin, Karissa Cosenza, and Brenda Alexander. Hart asked, however, that the students consider their core issue’s “contributing factors.”

“My son is now 16, but when he was seven we were homeless for two years,” she said, laying out the real-world stakes for the teens. “I got on my feet and promised to God that would never happen again. But you don’t just wake up and decide ‘I’m going to be homeless, today!’”

She drilled them for specifics on their plan to become landlords of affordable housing. “How many units would you have in your studio apartments? Would it be a supportive housing kind of situation? Would they have to pay 30% of their salary?”

"See Something Do Something" participants with judges

Codianni followed. “Is it a harm reduction kind of organization? Do you have to be clean?”

“Yeah, we’re going to fix them up,” the group offered.

At the end of the night, the Heller Family Prize for Community Innovations—in the form of a comically oversize check—went to Te’a Gray and Patricia Cooke. They were behind B.L.A.S.T. (Building Love Around Special Talents), an after-school and extracurricular enrichment provider designed after groups like LEAP or The Farnam Community.

Gray and Cooke argued that there was a gap in programming for grades 9-12 during school breaks and over the summer. The goal was to cultivate teens’ innate knack for event planning and train a cohort of 24 B.L.A.S.T. Leaders who could stage popup parties all around town.

Although B.L.A.S.T. won the prize that evening, many of the teams had already turned heads and secured alternative seed funding. A guerilla trash cleanup pitch touted inroads with Response Marketing, a nominal working arrangement with a Trenton-based waste manager, and an impromptu declaration of support from a self-styled upcycling artist in the crowd.

“You can transform those cans into something beautiful! You can employ these homeless people to make the art, because art is priceless,” he grinned broadly. “I like your business idea. I think I can help you guys!”

Delima, Gary, and Rivera of the New Haven Leaders team even had the good fortune to present to one of their potential backers. They sought a $250 mini-grant for youth-led problem solving from the non-profit PeaceFirst. “See Something Do Something” judge Fish Stark happened to be PeaceFirst’s current Fellow-in-Residence.

“For the PeaceFirst grant, let’s talk,” smiled Stark. “We have your back!”