A Mural Blooms At Junta 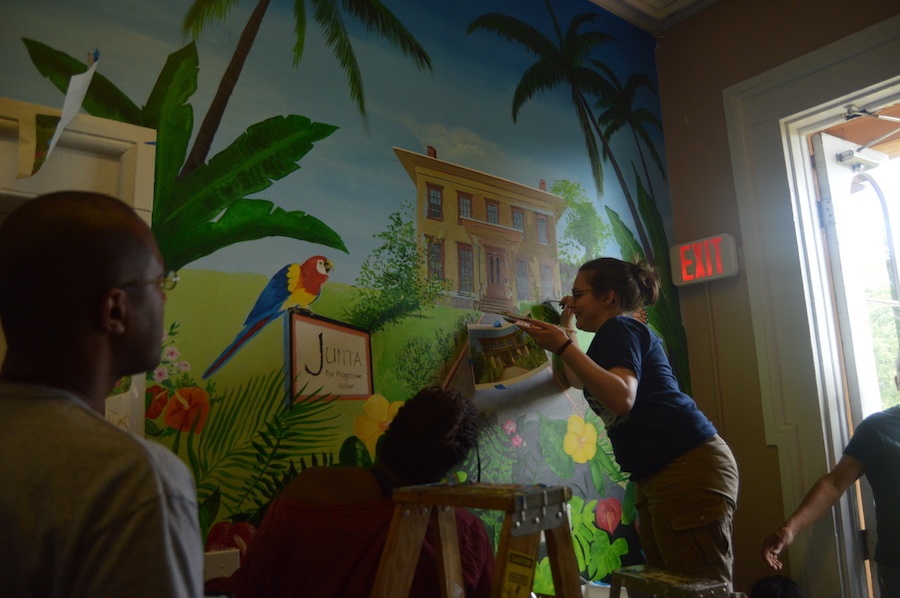 Joy Meikle: “Everyone leads, and you have to build from a diverse population.” Karen Marks Photos.

At Junta for Progressive Action, clients can now find community resources in a tropical forest. In one corner of the old building, a monarch butterfly and hibiscus flower flourish. Just inches away, a bright parrot settles on Junta’s welcome sign. Flowers dot the path leading inside, splashing the community center with vibrant color.

At least, that’s the case for a new mural going in on the building’s white walls, filling the interior with light. Last Friday, the project got some extra hands at Junta’s Grand Avenue offices, where Members of Public Allies Connecticut  and a steady stream of volunteers are painting it this summer as part of a community beautification project.

Public Allies is an AmeriCorps group of volunteers ranging from ages 18 to 25. The leadership development group has cohorts in Bridgeport and Hartford in addition to a New Haven chapter. Members must complete a total of 1,700 hours of service in order to “graduate” from their program.

Cohort Leader Joy Meikle said that the emphasis on mural—an inherently collaborative project— is that “everyone leads, and you have to build from a diverse population.” She said she tries to approach service projects with an asset mindset rather than a deficit mindset—to think of the resources that a given group has, rather than what is missing.

That approach came to the first stage of the mural, which the crew completed on Friday after starting it late last month. In it, a waterfall scene cascades down the staircase. In a thicket of grass and flowers nearby, Junta’s historic facade is framed by tropical plants and birds. Beyond that front door, viewers can imagine Junta staff hard at work, helping provide housing support, social welfare registration assistance, medical insurance, English classes and translation, legal services and employment connections for clients in the New Haven area.

For the volunteers, Meikle said that the mural is more than a beautification project. After moving to New Haven, she heard about Junta and brought it up to Public Allies while they were brainstorming their team service project. The cohort voted on it and decided to make the mural culturally relevant to Junta visitors from countries where tropical flora and fauna were native.

“I wanted something that would be here as a legacy and it’s perfect,” said Public Allies volunteer Jacqueline Brown. She said that one day, she imagines coming to show her children the mural at Junta.

“Public Allies opened a door to something that will continue,” said David Sepulveda, the project’s volunteer artistic director, as he watched the volunteer group work on shading a flower.

Later stages of the mural include uniting the waterfall motif on the first landing of the stairs with the tropical garden scene near the entrance. Above the mantelpiece in the main office, the group envisions a New Haven skyline. 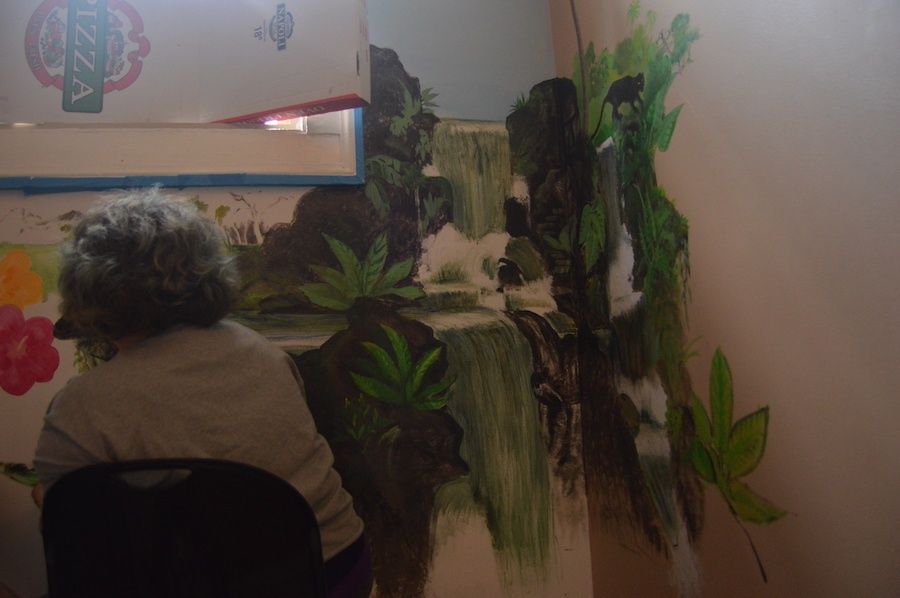 AmeriCorps has given the group $250 in funding for the project, though Meikle says that it has not yet been touched. In February, Public Allies held a community fundraiser with a “Self-Love” open mic, bringing in over $300. Volunteer Lovelind Richards said it was a chance to provide entertainment for the audience that encouraged members to get on stage. Since, the group has also received donations of art supplies from Sepulveda and local artist Amie Ziner.

Junta for Progressive Action is one of the last resource centers in Connecticut open for victims of Hurricane Maria (read about that here), and has served over 1,000 people and 400 families since the aftermath of the storm. When Meikle contacte Paola Serrecchia, Junta’s program director for advocacy and community engagement, she said she was glad for the opportunity of having a beautification project.

“People don’t come here because there are okay,” Serrecchia said. “We get a lot of people that are in pain, that are suffering, that are disenfranchised, and dealing with trauma, walking through that door.”

Once Junta visitors do come through the door, Serrecchia said she wants them to have a feeling of visual respite, and to feel at home. Despite the organization’s work with a majority-Latino client base, she emphasized that Junta is a place for anyone in need— New Haveners who may find themselves homeless, dealing with racism and discrimination, those who lost their home to fires. For all of them, she said, the tropical feel is colorful and uplifting.

Serrecchia also noted that the mural could be uplifting for staff members. “They’re dealing with difficult stories, and they hold [onto] that,” she said.

She added that even the unfinished mural has delighted children who walk in with their families. She recalled seeing a client’s eyes light up as soon as she walked into the front door.