Air Temple Soars On Its Stories 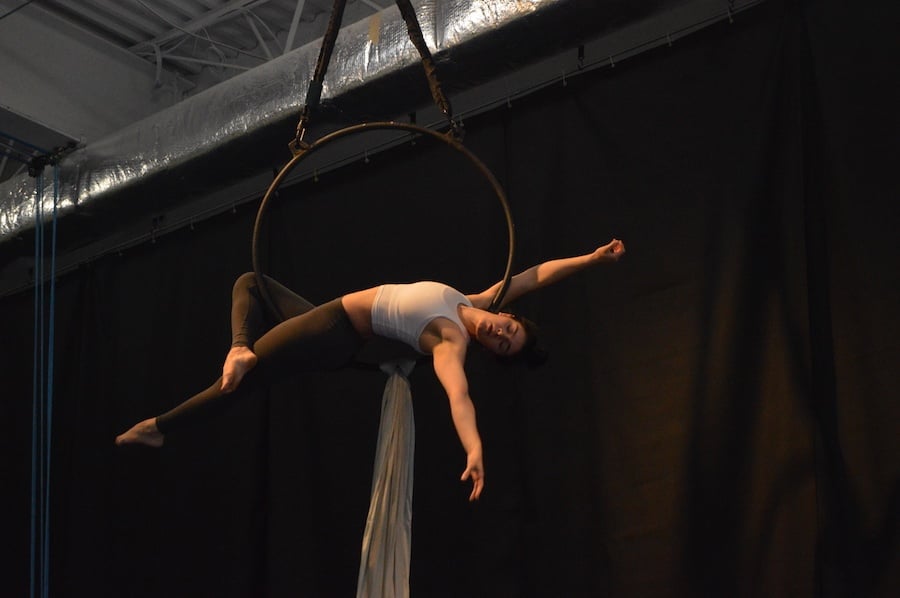 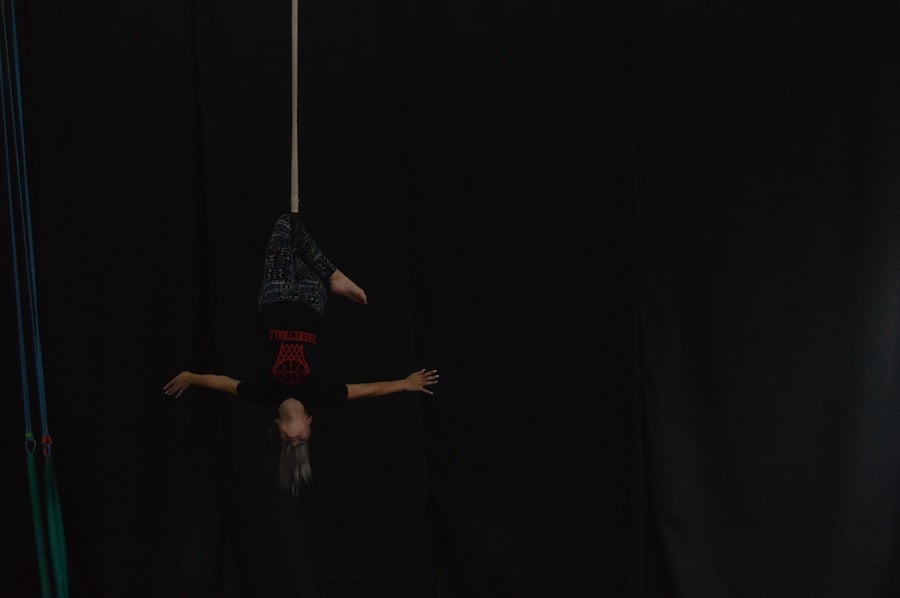 “You don’t know how strong you are until you have no choice to be strong,” Bri Lachappelle tells the audience at the beginning of the show. Karen Marks Photos.

Bri Lachapelle was on her way to becoming a professional ballerina when a connective tissue disorder called Ehlers-Danlos Syndrome began to sideline her career. She struggled with the symptoms: skin that could tear with almost no contact, joints that bent because there wasn’t matter there to keep them in place, chronic pain and weakness.

She had to stop dancing, her doctors said. Her life, as she knew it, had been turned on its head. Then five years ago, she discovered acrobatics.

This weekend, Lachapelle will tell that story on the stage—and flying through the air—as part of How the Light Gets In, the latest performance at Air Temple Arts center for aerial dance and acrobatic arts in Woodbridge. Devised and performed by 10 Air Temple artists, it is based entirely on personal anecdote and storytelling, performers shedding fantastical roles to slip into their own skin.

The show runs Friday and Saturday night at 8 p.m. out of Air Temple’s Research Drive rehearsal space in Woodbridge. For tickets and more information, click here.

How the Light Gets In began last November, as Air Temple performers came off a jam-packed year of three performances, each written to address a political or feminist moment. While it marked a level of productivity that the group had never reached before, it also meant that “people were super burned out” by the end of the year, said Air Temple Owner, Founder and Creative Director Stacey Kigner-Strange.

As the year slowed down, she proposed a brainstorming session with core members of the group. They came brimming with ideas, the air buzzing with them as she scribbled everything down as quickly as she could. And at first, it seemed like the meeting had been a success.

But then, Kigner-Strange said she realized that she was dealing with “total camel of a show … a hot, hot, hot, hot mess.” And she prepared to go back to the drawing board.

“I remember sitting there and being like ‘Oh no,’” she recalled by phone Friday morning. Her dilemma was twofold: she “didn’t want people to feel like I was taking away their agency,” but she also didn’t want a show that was too unwieldy to ever leave the ground. And then she realized that the answer was literally in front of her each week, in the studio. That she wanted to hear the stories her company members had to tell, right from the source. 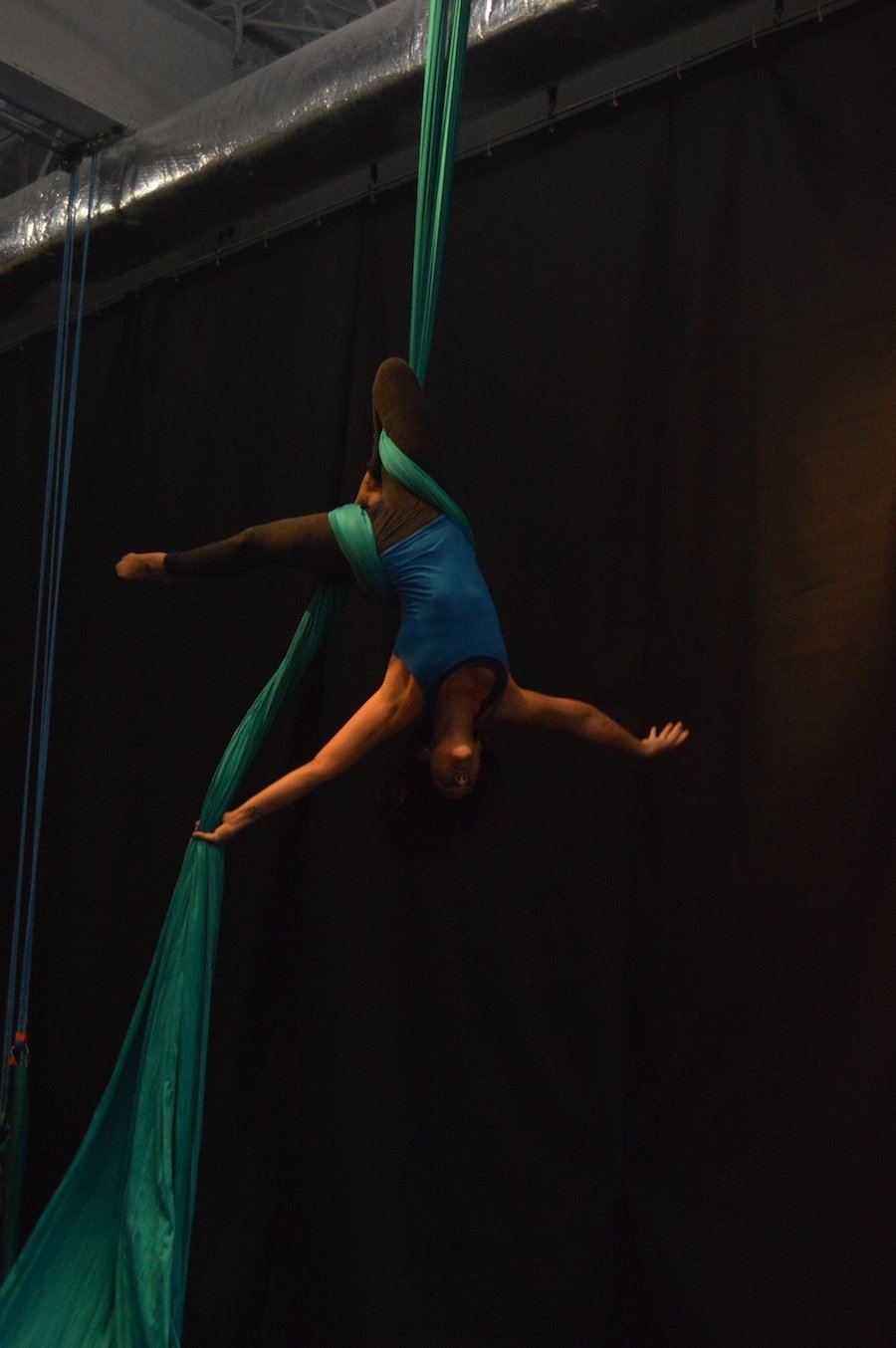 “Most shows are story line based,” she said. “This one is a lot more personal and we have to dig deeper, be more vulnerable.”

In January, she sent an email to “core members” explaining that she wanted to do something new for the next show: rely on the power of personal story to hold a show together. To be, for Lachapelle and every performer involved, Air Temple’s own connective tissue.

She gave members time to respond, workshopped ideas, and then opened a call for auditions to the greater New Haven community, a practice that she’s gotten into over the last few performances. There were only two requirements: it had to be personal, and it had to be narrative.

Five months later, that call for proposals has turned into an intimate performance (“We did a lot of crying,” Kigner-Strange said). Each performer has shaped their act around a personal challenge, producing acrobatic choreography inspired by struggles with insomnia, reconnecting with faith and religion, or fraught relationships with parents. Before they each take a turn in the spotlight, performers gather onstage to introduce their own demons, a sort of show of solidarity.

“I don’t know how to sleep at night,” says one performer.

“My future wasn’t the one I chose,” says another.

“How do I forgive my body for failing to keep my son safe?” asks a third aloud.

In a final rehearsal Thursday night, performers ran through their routines, story both spoken and unspoken oozing from each one. One performer edited a spoken word poem into her music as she climbed the aerial silks and swung around on the aerial hoop. Others included a monologue before the act, or fragmented bits of music edited under the performance track with radio static.

In the studio space, the apparatuses are just as individual as the performers who occupy them. Only two acts out of about ten are performed on aerial hoop; performers swing from ropes, wind themselves in silks, scale up two Chinese poles and suspend themselves from straps.

Running through her routine Thursday, Lachapelle perched herself in the aerial hoop and gracefully weaved herself into contortion poses to “Rise Up,” by Andra Day. It dovetails with a phrase she uses early in the performance, as performers line up together to introduce the show.

“You don’t know how strong you are until you have no choice to be strong.”