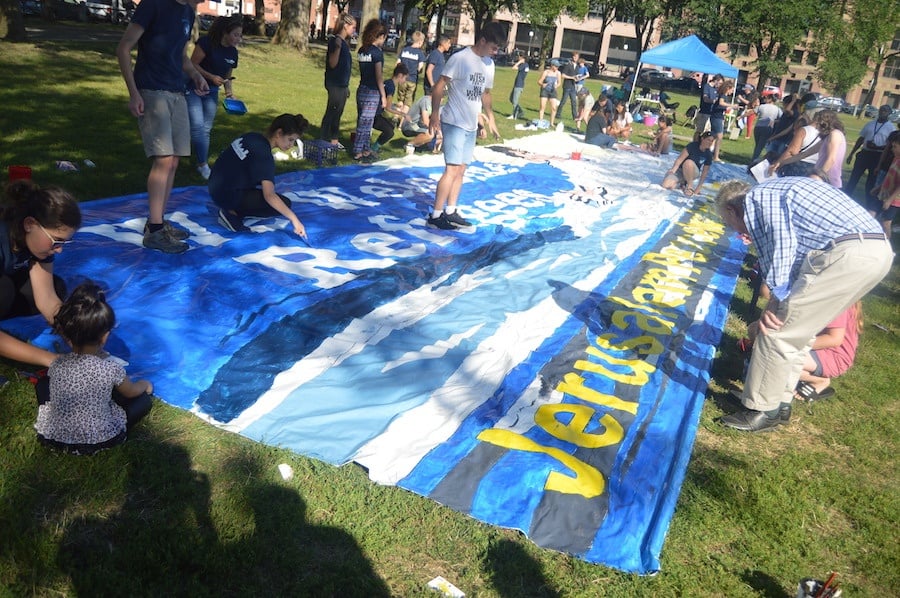 An Israeli sits on one side of a divide, watching as his Palestinian counterpart works intently just feet away. The Palestinian has his eyes on the Israeli too, interest piqued by the latest flick of his wrist, softening of his gaze.  What happens when they pass a paintbrush between them, and share a splash of color? Do they call a truce, in paint?

Tuesday night, volunteers joined at least 30 Israeli and Palestinian teens on the New Haven Green on Tuesday to “paint for peace,” decorating a 48-foot long billboard that will welcome refugees to New Haven on I-95. The teens are participants in the Jerusalem Peacebuilders, a U.S. based nonprofit that envisions “a Jerusalem and a world where Jews, Christians, and Muslims live together as sisters and brothers in dignity, equality, and peace.”

Russell Rainbolt painting some of his own design

This year, the organization is offering a service learning program in New Haven for teens from the Middle East to come together in service and discussion, and break down religious barriers in the process. Participants take part in work for Integrated Refugee and Immigrant Services (IRIS) to help refugees transition to life in New Haven.

The billboard, which will be placed along the I-95 at exit 42 this week, proclaims “We Welcome Refugees,” accompanied by the web address for the group Jerusalem Peacebuilders. Participants in the painting session included members from the Bridgeport Islamic Association, Dixwell Avenue UCC of New Haven, First Presbyterian Church New Haven, First United Church of Christ Milford, Congregation Mishkan Israel of Hamden, New Haven Islamic Association, Trinity Lutheran Church of Milford, and Woodmont United Church of Christ.

The first “Painting for Peace” was held in 2007 on the West Bank with Israeli and Palestinian children with Combatants for Peace.  Since, the program has spread internationally, with several billboards making landfall in Connecticut in the last 11 years.

Tuesday, students celebrated the diversity of their backgrounds as they painted. There were teens like Uri Klempner, who was born and raised in Israel  but “hadn’t met anyone from Gaza or the West Bank” when he started the program.

He recalled a heated group discussion about the Israeli-Palestinian conflict on the first day of the program. Afterwards, a smaller group of students continued the conversation and tried to listen more actively. As Palestinian students spoke to their experiences, Klempner said, “I didn’t try to explain or justify myself,” and neither did other students when he spoke.

Or participant Eliran Ben Yair. Speaking to the assembled students and community volunteers, he recalled his initial anti-Muslim and anti-Palestinian sentiment, a vestige of his hometown in Israel. An Israeli Jew, he described his apprehension on meeting his Palestinian roommate Abdallah Salha. “I couldn’t sleep for thirty minutes the first night,” he said. 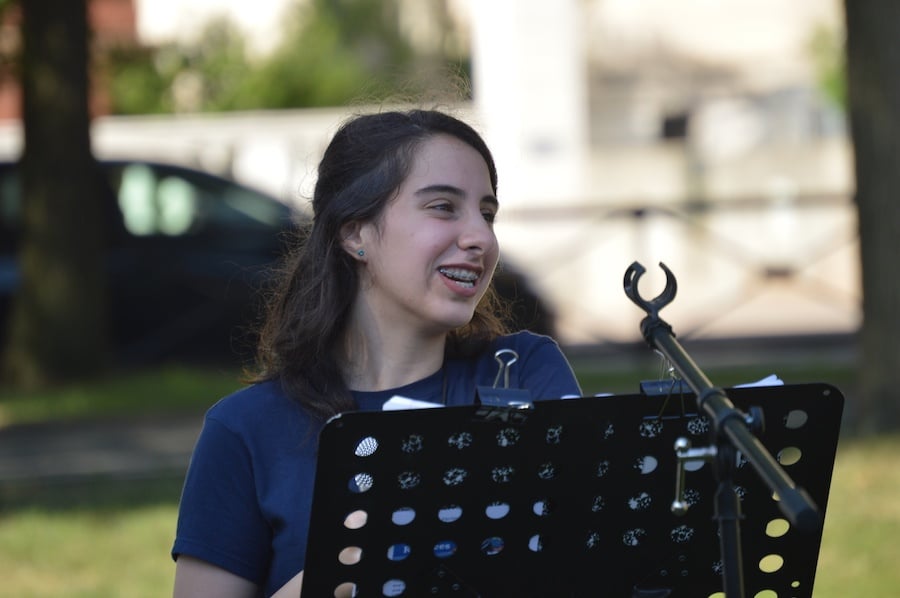 “I couldn’t sleep that night either!” his roommate shouted from the crowd, laughing. Now, the two are friends—and Ben Yair said he believes that he found not only new friends this summer, “but most importantly, new family members,” despite the anti-Palestinian bias that he was raised with.

These interfaith dialogue workshops in communication and respect are also applicable for discussions outside of the program.  A Palestinian Christian from Nazareth—known as the “Arab capital” of Israel—Shada Bishara recalled an encounter with a woman who did not know that there were Arab people living in Israel, and was excited to learn more from Bishara.

Which, said volunteers as they joined in, is the hope for the project. Alex Forte is the youth group advisor at Congregation Mishkan Israel, and coordinates congregation youth involvement in setting up apartments for refugee families, collecting donations and keeping up their awareness of issues happening both in the wider world as well as in their communities.

“We change hearts and minds through collaboration,” Forte said. 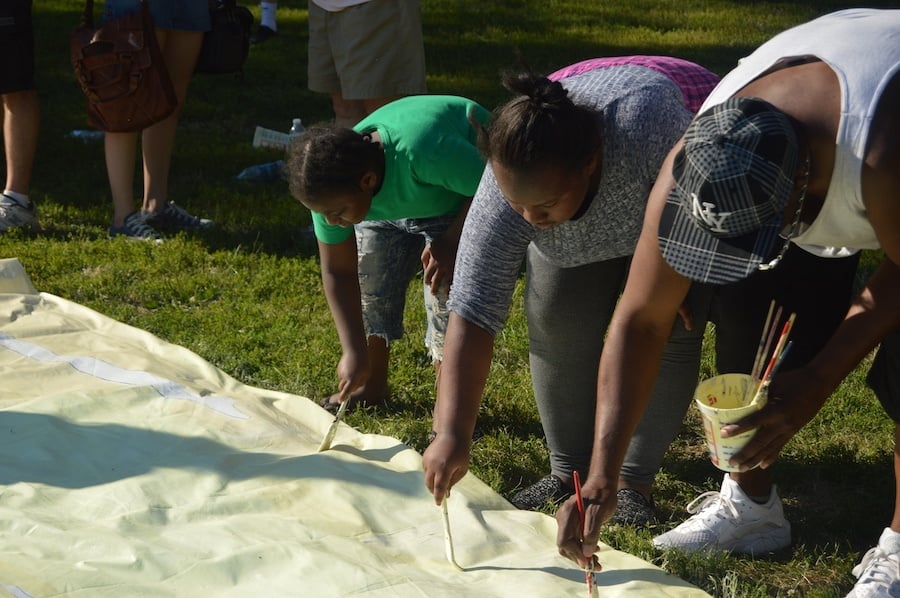 Community member Michael (he declined to give last name), and daughters his Alonna Reid and Deanaya Leon.

Jerusalem Peacebuilder participants had come to the synagogue to take part in services and had also visited a church and mosque as part of their program together. Reflecting on roommates Ben Yair and Salha’s initial anxiety, Forte said that “they were afraid of the same reason, which is no reason.”

“I wanted to put up a statement that despite government movement against refugees … America should continue the tradition of making sure refugees are cared for,” said Billboard Designer Russell Rainbolt. A veteran of the first “Painting for Peace” project, he said he wants to get people from all sides to realize getting together is easy.

“We say life reflects art,” Rainbolt said. “But our lives should reflect this piece of art.”

“Anything we can do as Christians, Muslims and Jews together is so vital,” added Pastor Marjo Anderson of Salem Lutheran Church in Bridgeport. “And we need to welcome refugees.”

She excitedly highlighted that “Salem,” “Salaam,” and “Shalom,” all had the same meanings.