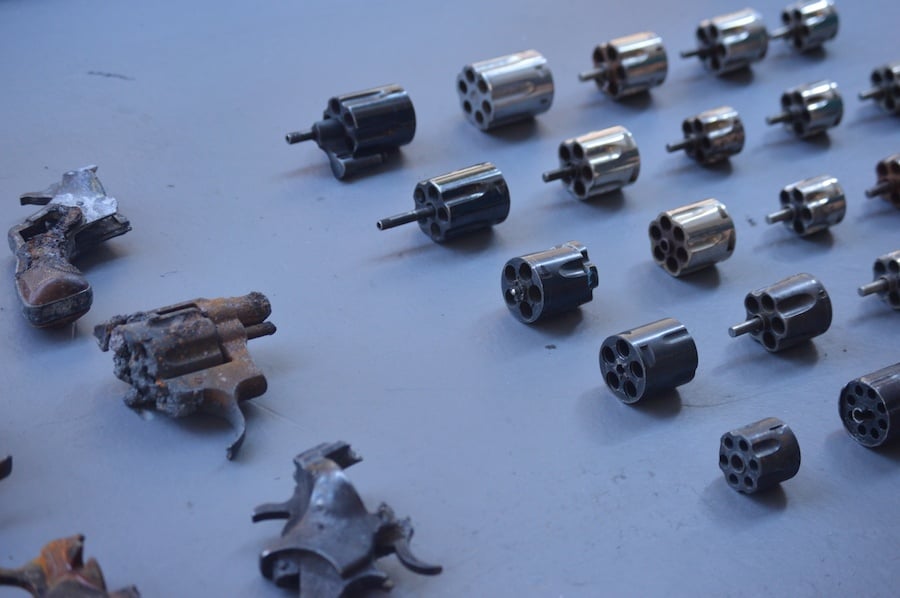 Katie Heinlein: “Each piece had a place...gun control should be more like that." Karen Marks Photos.

Bullet chambers faced rusted triggers in perfect parallel lines. Wooden butts of shotguns cut the lines at right angles. Artists of all ages peered down at precise squares of gun parts and began to pick them up, breaking their formation.

Artists assembled at Artspace New Haven Thursday night for part one of Unload: Pick Up the Pieces, a knolling performance after which they could choose pieces of deconstructed guns for an exhibition this fall at the Ely Center of Contemporary Art and future art projects. Knolling is the practice of organizing like objects parallel and perpendicular to each other, and provided a clear display of materials for artists.

The event was organized by the Unload Foundation, co-founded by Mary Himes and Helen Klisser During, in partnership with the Ely Center of Contemporary Art and Artspace. The knolling performance was brought by artist Tom Sachs’ studio in New York. Himes and During explained their vision as Sachs’ studio intern Chance Baldauf knolled gun parts into perfect lines and right angles.

“No matter how helpless we feel, we as artists and people in the arts have a voice,” During told performance attendees.

The gun parts on display in Artspace are from 68 guns collected at a gun buyback in Hartford. Artists were encouraged to take as many parts as they wanted to, with the idea that they’ll become part of pieces shown at the Ely Center of Contemporary Art this October. During emphasized that there was no cost involved in participating in the show, the timing for which falls deliberately right before midterm elections.

When asked about the role of knolling in the display of gun parts, During said, “We were just thinking about how to give them the parts, in attracting artists.” She met Tom Sachs when he was making art from guns from found objects and was inspired to involve his vision.

“No matter how helpless we feel, we as artists and people in the arts have a voice,” During told performance attendees. 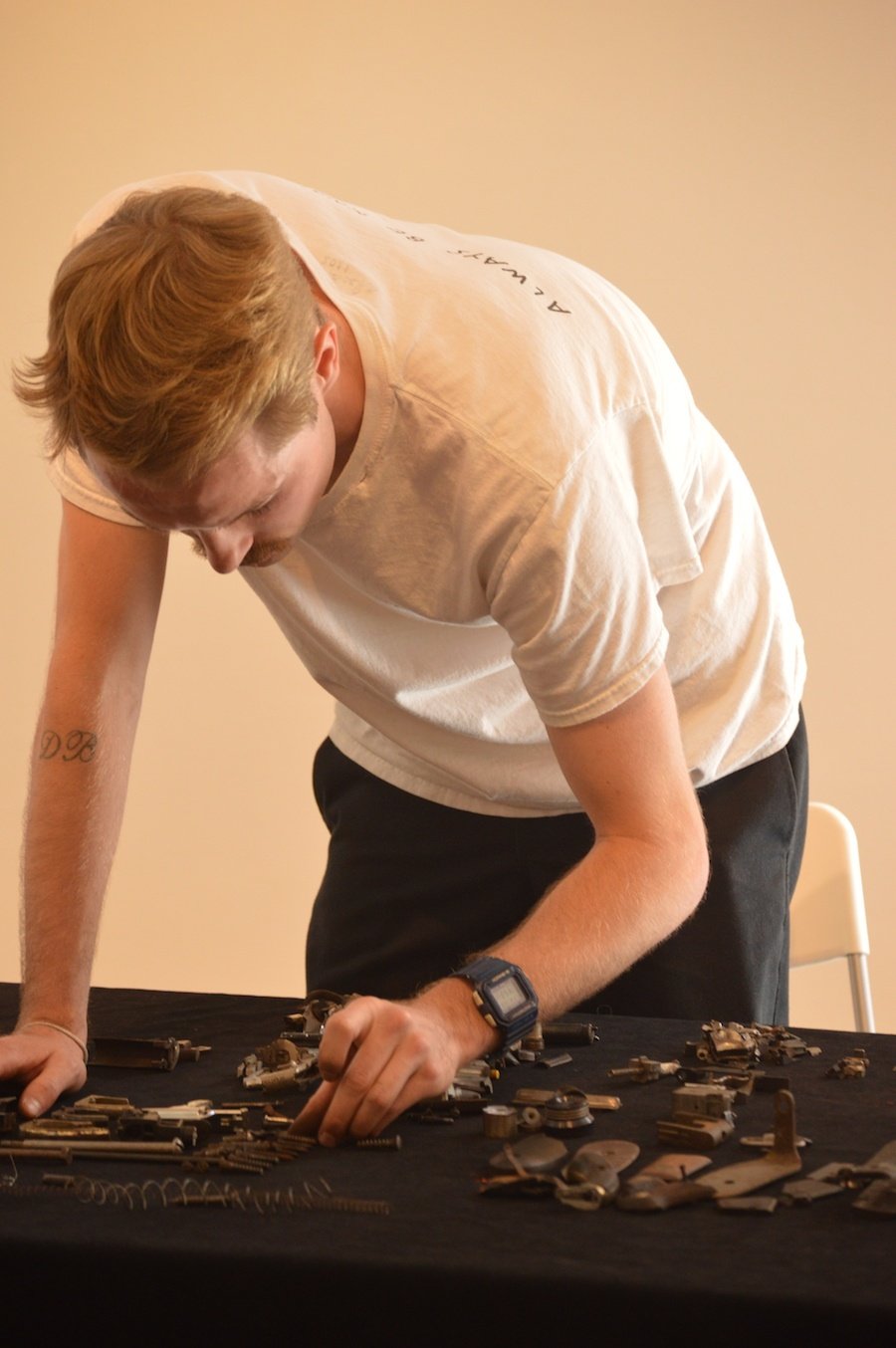 During and after the performance, Baldauf described knolling as a form of meditation. “This event is more aesthetic, but its normally at a workstation with various tools,” he said. He said he finds knolling even gun parts to have a “zen aspect” that he has appreciated his whole life, so much so that “somebody who is going through trouble or maybe ends up pulling a trigger could just try it out.”

“The mission of Unload is to broaden conversation and drive consensus and issue of gun violence,” said Himes. The wife of U.S. Rep. Jim Himes, she got involved with Connecticut Against Gun Violence after a mass shooting at Sandy Hook Elementary School in December 2012 claimed the lives of 20 children and six adults.

Then, Himes said, there was “tremendous progress with gun control, but on the federal level — no success.” She referenced the bipartisan Manchin-Toomey background check proposal that failed by a single vote in Congress five years ago.

Himes is from Canada. Her brothers and father hunt ducks so she is no stranger to guns, but upon moving to the United States, she was left perplexed by the gun culture in her new country.

That’s why her hopes for the exhibition, and the foundation more broadly, are twofold.

“One, we will bring more people into the conversation...gun owners, Republicans, emergency room doctors and nurses,” she said. “And two, get young people involved.”

In art, she added that one can take the conversation out of the political circuit, which she believes is “totally polarized and paralyzed.”

Recent high school graduate Zahrah Butt was drawn to the event by the idea of being able to make something new out of reconstructed guns. She found out about the event through her foster mother’s friend — her mom is a jewelry designer and woodworker. 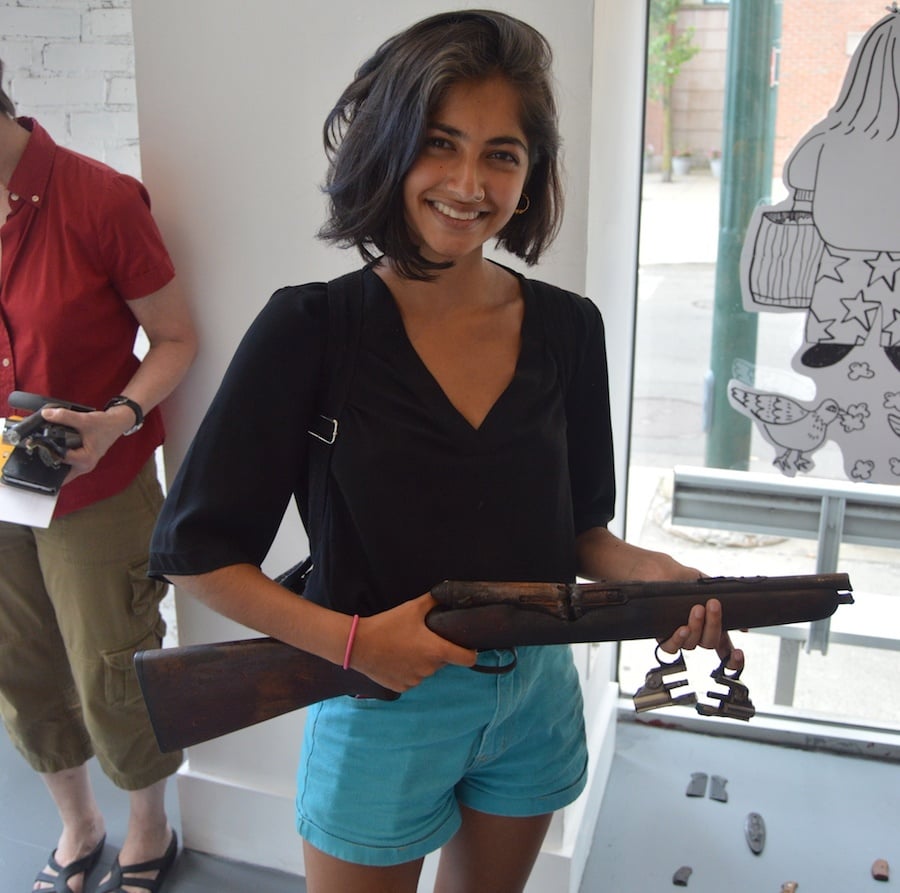 Zahrah Butt: From guns to angels?

“I make sculptures of angels,” Butt said, showing two triggers dismantled from their guns. “I chose these two pieces because of the symmetry.”

She also chose the wooden shaft of a shotgun that was covered in dirt and rust. The hole in the wood had burned-out edges, and the remaining ash was smeared on Butt’s hands. Butt said all of her sculptures are made of found objects that she “upcycles,” or perhaps even demilitarizes in the case of two triggers transformed into angel wings.

Artist Katie Heinlein (pictured at top) was not sure what she planned to make yet. A volunteer at the Ely Center, she has already made one gun control piece — baby pacifiers assembled to form the image of an eight-foot long AR-15 rifle.

“I just really wanted a terrifying piece,” she said. “To literally stare down the barrel of a gun.”

“[Knolling] is so specific, and gun control is so ambiguous,” she added. “Each piece had a place...gun control should be more like that."