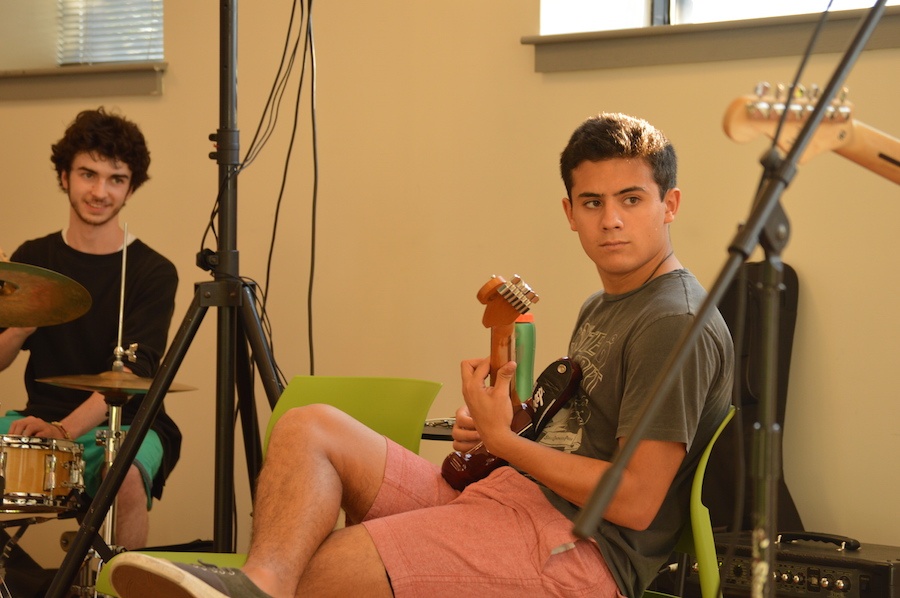 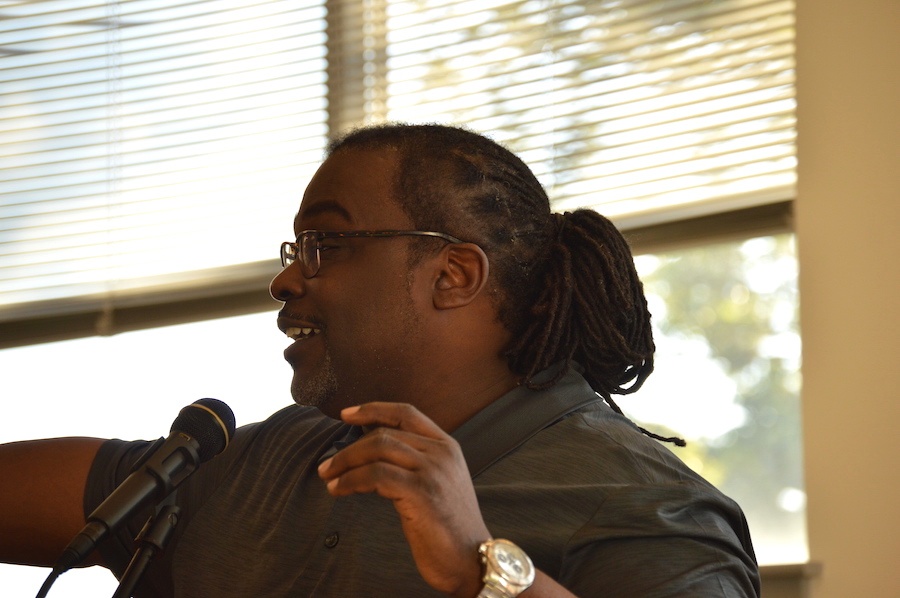 The members of Toxic Holiday neared the end of their song, a smooth jam of vocals, bass and trumpet. They took a few measures to jam a bit between instruments without the vocals on top, lead guitar solo, then a conversation between trumpet and bass. As they hit their last note, emcee Steve Driffin cut into the mic.

“That makes me wanna have a drink with an umbrella in it!” he said.

Driffin set the scene Friday, as the Connecticut Center for Arts and Technology (ConnCAT) hosted the first in its three-night series of “Freedom of Speech Fridays.” The open mics, which continue July 27 and August 17, are organized by ConnCAT  Youth and Community Programs Manager Steve Driffin and Tina Sutton.

Throughout the evening, Driffin flowed seamlessly from his emcee duties to his own poetry. As attendees finished their acts, he took the mic, reading some of his own work for a small crowd that gathered.

Freedom of speech oftentimes feels like an illusion
Got this fool in the White House causing mass confusion...
Brown babies in cages, causing outrages
Let’s not forget they’ve been doing this for ages... 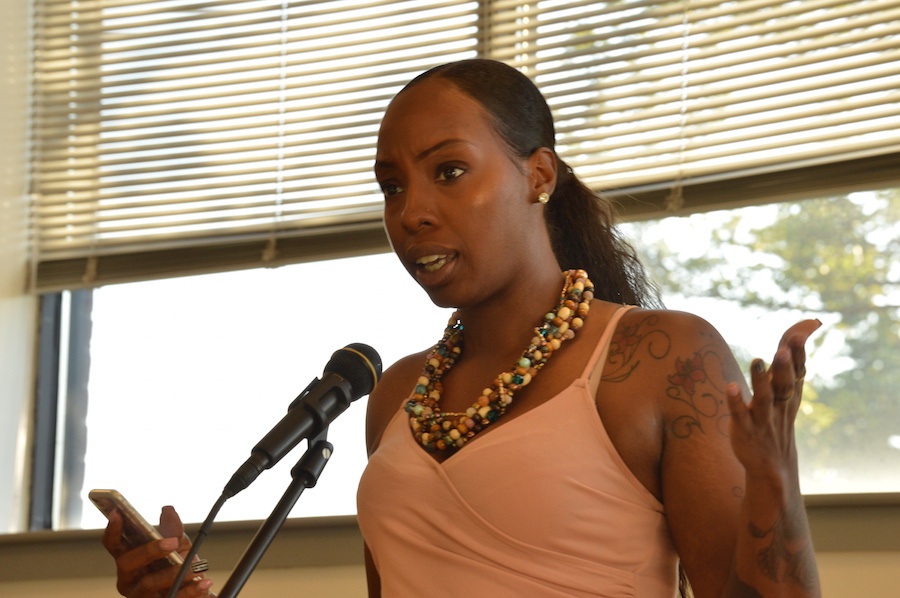 New poet Shavon Gales takes the mic with her phone. In an interview after she read, Gales said that she and Driffin know each other from attending the same church for two years.

Then he slipped back into his emcee role. At one point, Driffin encouraged first-time performer Shavon Gales to come to the microphone and perform her poetry despite her nerves. An acquaintance of Driffin’s from church, Gales took a deep breath and giggled that she was nervous, but read two poems with her son watching.

“I no longer want to be saved,” she read from her phone. “Your name is engraved into this caged heart of mine…”

Gales left the stage to applause, already priming herself to come back up to the microphone a few performances later.

“Anyone has the ability to be great!” Driffin said to the audience, invoking ConnCAT’s mission statement—“to inspire, motivate, and prepare youth and adults for educational and career advancement”—to praise past performers and compel acts. Even writer Asia Stanford, hesitant to read her work, ended up having her outline for a new self-help book brought up to the mic for her by event co-organizer Tina Sutton.

“You know you can really play when you can cross your legs,” he said, referencing Toxic Holiday guitarist Franco Acuna’s casual posture as he strummed through the band’s mix of “Alright” (Kendrick Lamar) and “Stay Woke” (Childish Gambino).

Toxic Holiday is made up of frontman Tyler Jenkins, Franco Acuna (guitar), and Jackson Roman (drums). Their bassist Daniel Rameriz was not at the open mic, but the trio teamed up with trumpet player William Fluker to add something extra to their sound for the night. The group started playing gigs as early as high school, where they also met their drummer Roman and started to branch out more. At this year’s International Festival of Arts & Ideas, they became the youngest band to play in the event’s history. Now the four are preparing to start their freshman years of college in the fall.

“It was pretty wild, playing on the Green,” Jenkins said.

After taking on the Green earlier in the month and planning to record a new album in July, Toxic Holiday sat comfortably in the Orchid Cafe of ConnCAT, providing accompaniment for poets and other vocalists when they weren’t playing their own original songs or covers.

After their second set, Driffin told the audience to never doubt humble beginnings, laughingly remembering his dismissal of college classmates that formed Hootie and the Blowfish.

“It’s good for the kids,” performer Gamaliel “Gammy” Moses said of ConnCAT. “I came here ever since it opened.” 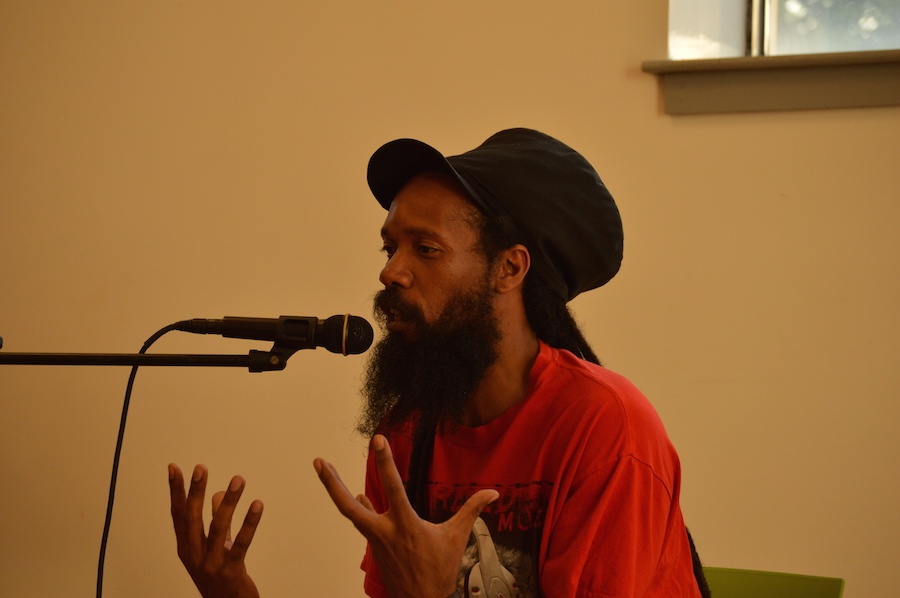 ConnCAT opened in 2011 at 4 Science Park and offers youth programming after school, as well as culinary classes and professional development for adults. The space also features a gallery of children’s artwork and a photographs by Benedict Fernandez of the last year of Martin Luther King, Jr.’s, life.

Moses’ own daughter, who takes part in dance classes at ConnCAT, showed off her moves during the Toxic Holiday performances and during her own dad’s drumming and rendition of “Stir It Up” by Bob Marley.

“As people of African ancestry, these rhythms have been passed down,” Moses said before his first stand on the stage. Sitting with his drum between his knees and dreadlocks over his shoulder, Moses began to play and his daughter pranced around behind the tables in her jelly sandals.

Moses’ poetry included its own theme of intergenerational support, in both tongue-in-cheek phrasing (“Old people are the original Google”) to serious stanzas (“Look to the past for inspiration because you can’t build a house without foundation.”)

The open mic itself stood as a foundation for the continued creativity at ConnCAT. Even after the open mic was closed off and attendees began to mingle and clean up, Toxic Holiday kept playing, encouraging Shavon Gales to read another poem and singer Lisa Bellamy Flucker to take to the microphone, continuing to nurture freedom of speech until the last sound system was disassembled.