Paper or Plastic? Do We Have A Choice? 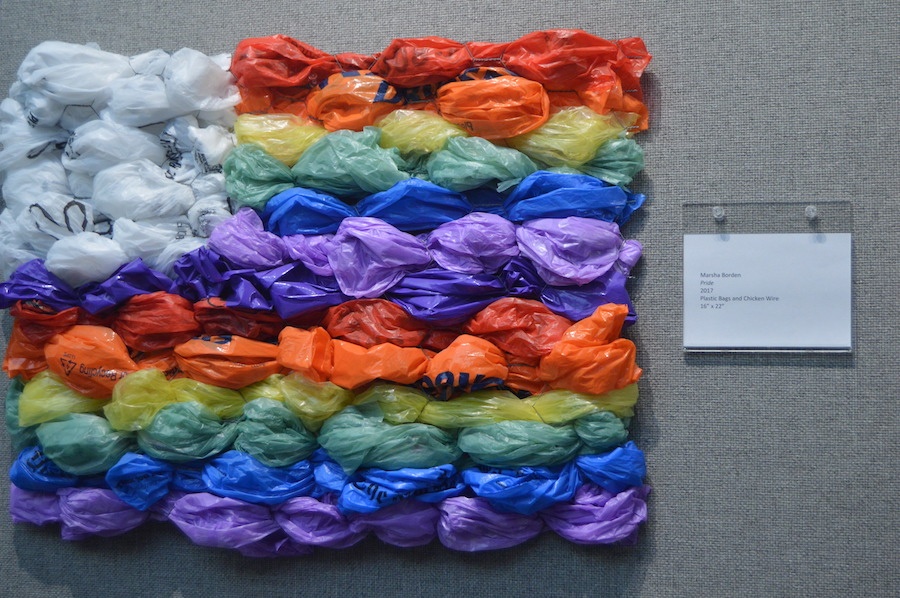 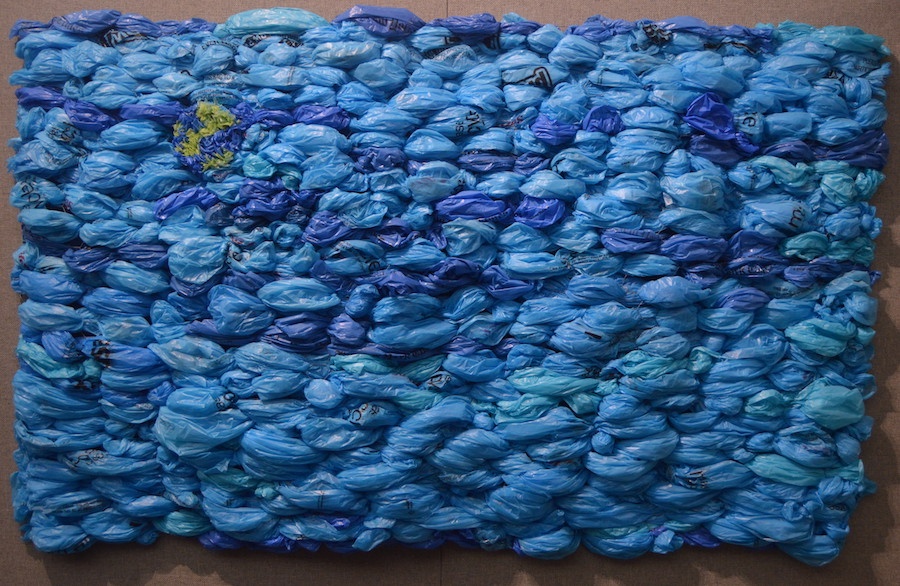 A simple blue rectangle of woven plastic bags is mounted on the wall. On closer inspection, the image of the earth is visible in the top left corner. Its green patches of land are noticeable, but the eye struggles to separate the blue of the earth’s oceans from the sea of plastic that surrounds it—literally.

Lost At Sea is one of the pieces in Marsha Borden’s Remixed: a Kaleidoscope of Plastic, running from now through Sept. 7 at the Ives Gallery at the main branch of the New Haven Free Public Library (NHFPL). The exhibition, which opened with a reception earlier this week, is free and open to the public.

The idea for the exhibition began two years ago, as Borden noticed a mounting number of plastic bags in her house. As the pile of bags grew, she began to tease out the different colors and patterns on their plastic surfaces. With a background in knitting, weaving, and crocheting, she said she looked at the abandoned bags and thought “I could be using these as material.” 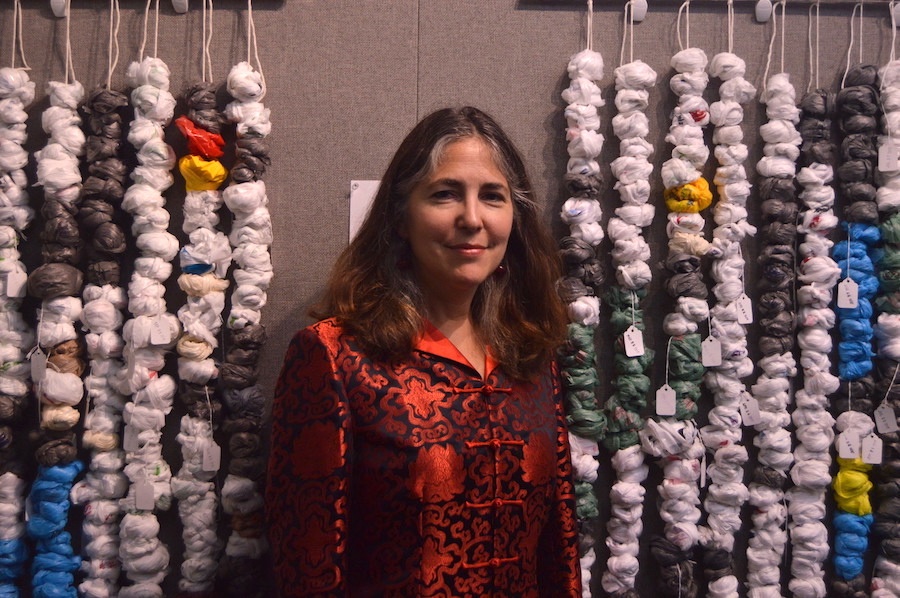 Borden looked up YouTube tutorials on how to make yarn from plastic and started working on knitting with the “yarn” in 2016. Eventually she moved into crochet and weaving, producing more and more pieces that made their way into Remixed.

“Some pieces were just fun,” Borden said, referencing her Trashy Tea Party as an example. In the piece (pictured below), brightly colored plastic bags are woven into a teapot, teacups, and saucers, all arranged at wonky angles on a table mat of plastic bags.

But the works also took on a more serious tenor the more she thought about them. Borden said continuing the plastic art went from fun to raising awareness. She noted a recent debate on banning plastic straws that has joined proposed bans on plastic bags and plastic water bottles.

“It put me in touch with the zeitgeist of our plastic problem,” she said.

Pride , one of the more whimsical works in the show.

Lost at Sea, for instance, depicts the world floating in an array of blue, suggesting that the amount of plastic on earth has surpassed even the planet itself.

Borden acquired her plastic bags on her own, but also asked friends and family for any plastic bags they had to spare. When asking for excess plastic, she came to terms with the fact that there are in fact people who reuse their plastic bags: as trash can liners; for wrapping up shoes in luggage; temporary tote bags.

“So I really tried after that to give balanced view,” Borden said. Not all the pieces of art in Remixed are in the same tenor of Lost At Sea. More quaint and whimsical pieces include a blooming heart, rainbow Pride flag and a beaded ear of corn. 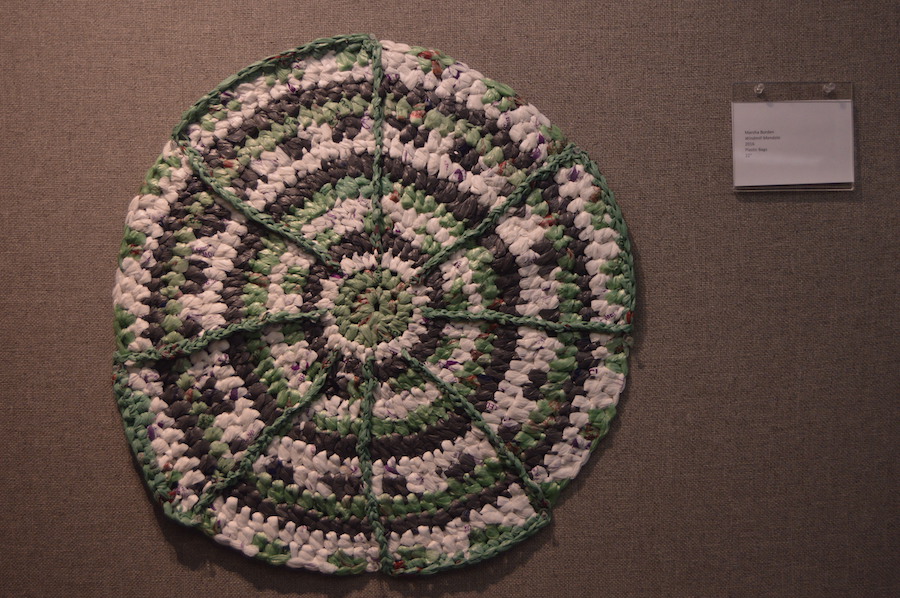 Windmill Mandala is Borden’s take on the mandala, a figure that represents life and the universe in Hindu and Buddhist practices. The mandala represents humanity beyond the individual—the importance of the environment and earth beyond our convenience and survival.

Sand mandalas, in particular, capture this essence in a Tibetan Buddhist practice by monks. By drawing mandalas in the sand and letting them be destroyed by rising tides, monks create an exercise in remembering our individual space on earth as temporary.

But in Borden’s rendering, the mandala is constructed of a material that is painfully permanent. The work’s white, black, and red-flecked greens won’t be going anywhere anytime soon.

The very problem of plastic is larger than grocery bags as well, Borden said. Synthetic material is used for inexpensive fabric for clothing, baby bottles, and shoes. She spoke of the plastic lobby on Capitol Hill — organizations that want to make sure we continue to use plastic, no matter how many of us bring reusable bags to the supermarket. 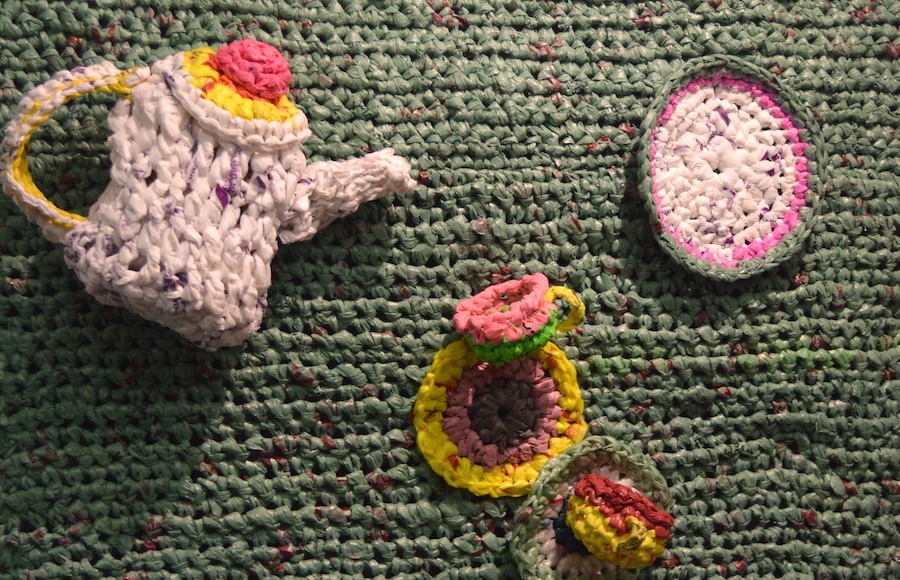 A detail from Trashy Tea Party.

Because plastic is a byproduct of petroleum—as are household cleaning products, asphalt, and some dyes—the issue is bigger than a “big plastic” lobby. As long as petroleum is refined, plastic will keep being produced. Remixed weighs the personal responsibility of individuals versus large industry. A dreamcatcher woven out of grocery bags could simply appear as an easygoing ornament, but could also spark conversation on the effect of fossil fuels mined on Native American land.

Borden paused and considered the earth floating in a sea of blue plastic bags.

Behind her, an array of plastic bags she had collected over a year were strung together into a curtain, large enough to cover a doorway.