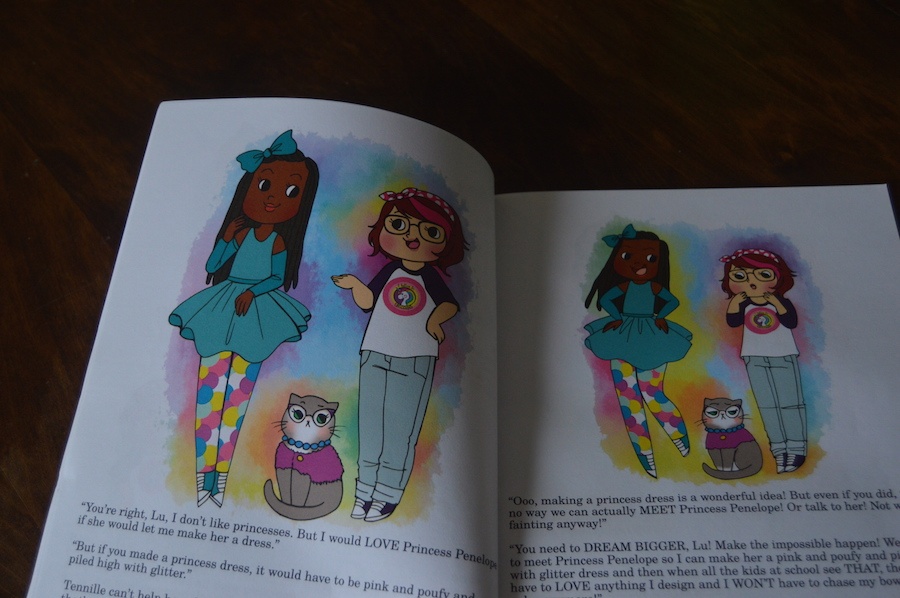 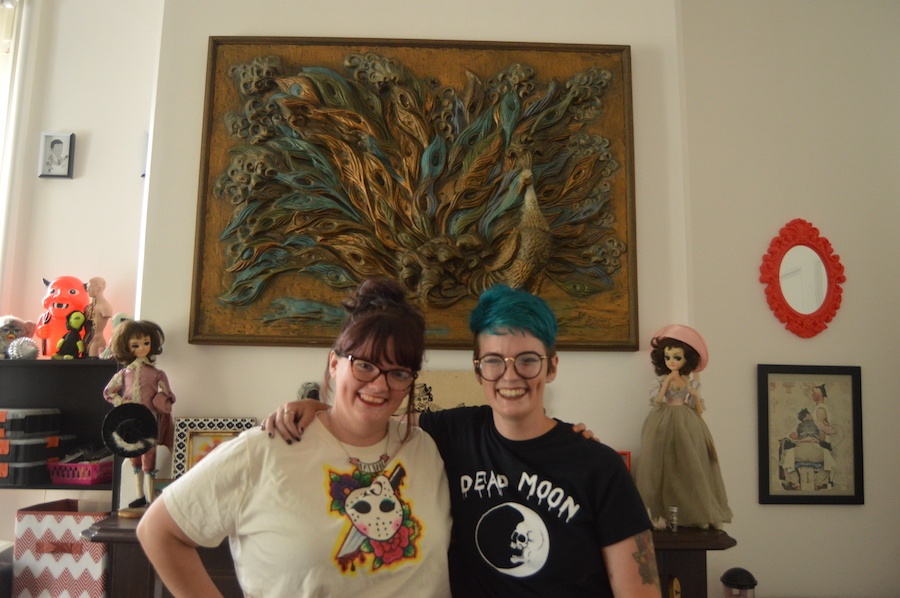 There’s new life up the dark wood-paneled staircase at 198 Sherman Ave. Shelves and drawers of watercolor paints, body ink, and craft tools line the walls. An orderly table with a few pads of paper and colored pencils laid out on top sits waiting for busy hands. Vegan almond treats wait on the kitchen counter. A button maker, framed prints, and taxidermied deer head wink out from odd corners of the room.

This is the new home of siblings Beck and Valerie Doty, who have recently become the first-ever artists-in-residence at Sol for Art. The pair moved into the house on the first of July, and recently finished setting up their apartment above the main art space on the ground floor. Their second-floor flat serves as living space, home studio, and potential host space open to the public.

Sol for Art is an art space and part-time gallery started by Cleveland Solomon and Zenobia Garland in April of this year. The gallery’s open featured burgeoning and amateur artists and will continue to be a space for local artists, especially those showing for the first time. Beck and Valerie Doty found the space by happenstance, as they were looking at another property that Solomon managed. 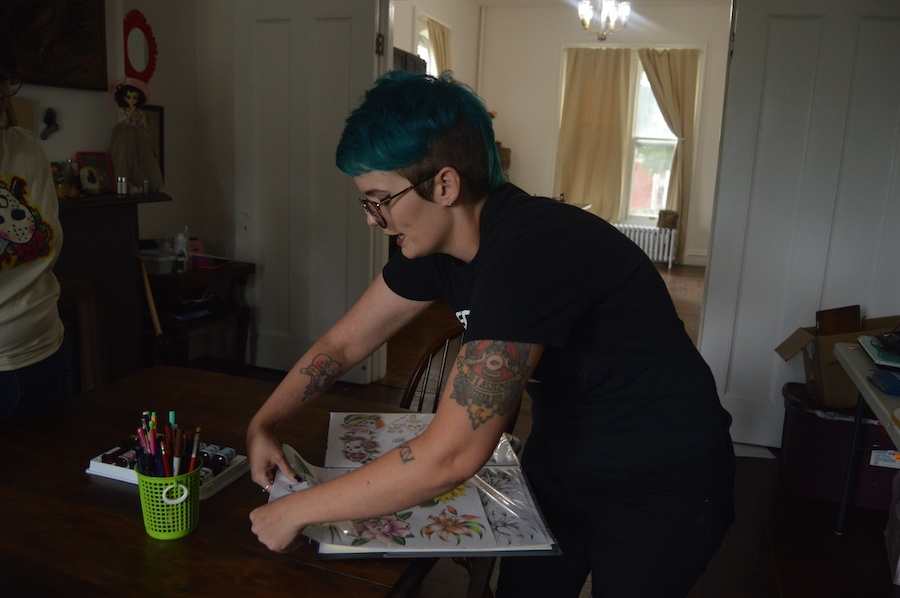 “We met Cleveland through a Craigslist ad for a different place,” said Beck. “And then he just asked, ‘Are you artists?’” Moving into New Haven in pursuit of more connection to the art community, the siblings found their residency to be “pure dumb luck.”

“It’s kind of like it was fated to happen,” Valerie said, laughing.

For the siblings, interior decorating is a mix of their own art, supply storage and odds and ends collected from garage sales or curbsides. It’s a trend that reflects their thriftiness—both have multiple jobs to support their art. During the day, Beck Doty manages a hair salon in Milford. Then, from six in the evening to ten at night, she works as an apprentice in a new tattoo shop downtown.

“I can do a lot of work at my job,” she said in a recent interview. “I have the office space to paint [at the salon].”

She pulled out her practice sheets from the shop, designs that started in black and white, and then escalated through shading, colored pencil, and then vibrant, seamless watercolor. Not all of her work falls in line with tattoo work though. In an illustration purely for her, a person lays in purple shadow, eyes concealed behind sunglasses that proclaim “Glory, Glory, it’s good to be me!” 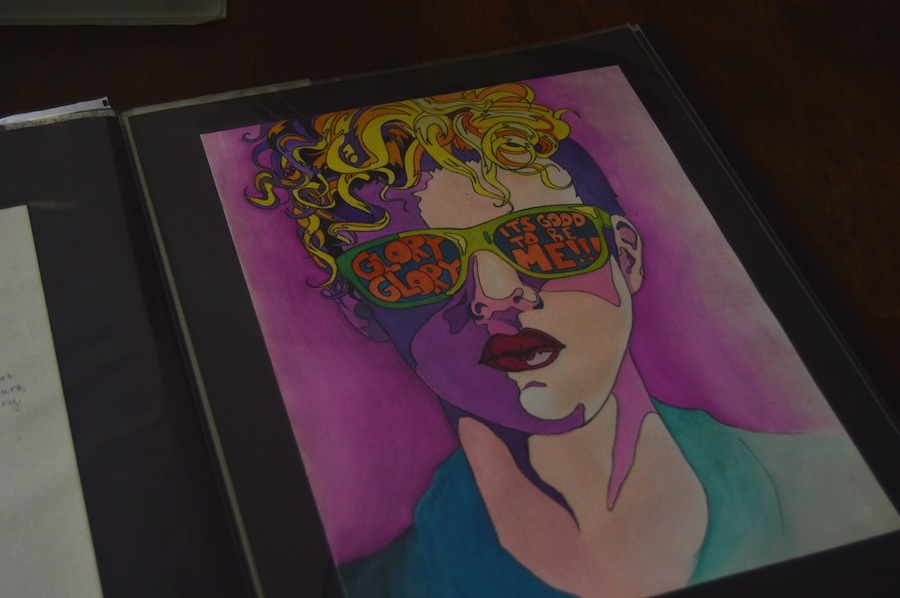 That carries over to Valerie Doty’s life, too. In addition to working at a restaurant during the day, she works as an illustrator, but also makes jewelry and designs for buttons. Many of the buttons come with potent messages—an anthropomorphized uterus advocating for reproductive rights; support for gender-inclusive bathroom laws that proclaims “You can pee with me;” a simple rainbow for LGBTQ+ pride. As she walked around the studio, Valerie pointed at a “420” design.

“That one’s for my stoner base,” she snorted.

It means long days. After her 11 a.m. to 7 p.m. shift at the restaurant, Valerie comes home and starts doing work as The Tiny Hobo.

“When people asked me what I wanted to be when I was little, I said a hobo,” she recalled. “I really liked the idea of riding the rails...the nomadic lifestyle.”

As she grew up, Valerie realized that she couldn’t actually survive the hobo-lifestyle, but kept the name. It suggests a continuity in her adventurous nature—though working as an artist-in-residence and being a hobo are in no way alike in financial stability, both siblings find that it is often difficult for some to see their art as full careers. 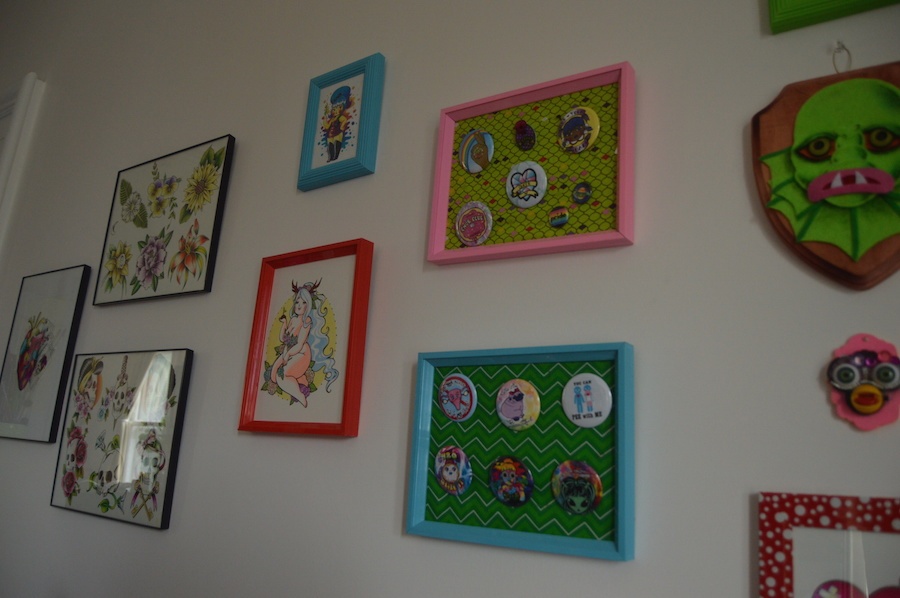 Their parents have always been supportive of their inclination towards art —even when Valerie told strangers that she wanted to be a hobo.

“You only have one life,” said Valerie. “Live how you want to within means, even if you have to get a day job.”

“You don’t tell someone who does brain surgery that it’s just a hobby,” Beck added.

Valerie’s most recent project was as an illustrator for the children’s book, Tennille and the Tale of Princess Penelope, with author M.J. Jones. She pointed out a character with brown chin-length hair and glasses.

“This character almost killed me,” she recalled, describing the long editing process—like the shape or curve of the character’s mouth—that went into bringing the author’s vision to life.

Now, Valerie said, she’s sharing more personal art. She put her own art on the back burner after a bad breakup and depression. But, she realized, “If I have a reason for living, [art] is it.”

In her early twenties, she said she worked on her art full time and hopes to return to devoting more hours to her craft. As she walked around her new home, she wore both a T-shirt and necklace that read “Fat Babe” she had designed and made herself. She’s recommitting to wearing her art in her daily life, while working on a new series of zodiac illustrations.

“I do a lot of body positivity work,” she said, adding that she hopes it will make other women feel visible and included.

The siblings’ support for each other has created its own special partnership. Beck said that she often helps Valerie coordinate and pack orders for her pins and jewelry online. Valerie gestured to the meticulous sorting and organization of their workspace. “And she keeps me organized.” 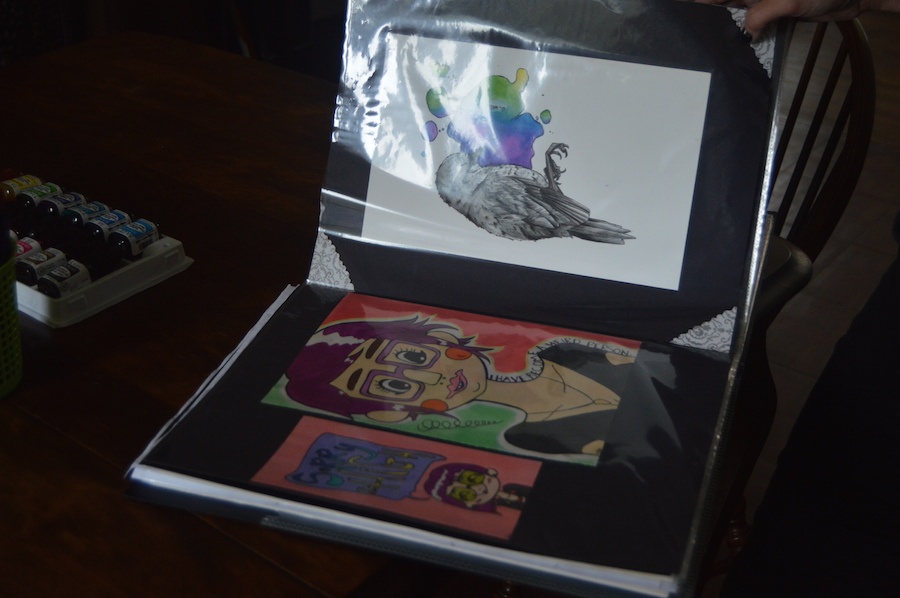 In their previous apartment, Valerie said that having workspace meant climbing over both kitchen and art supplies, clearing the kitchen table. Living in Sol for Art—itself intended to be a dynamic, living arts incubator—allows the siblings to have a dedicated space for their studio space.

The apartment also gives them space for collector’s pieces and quirky decor that livens the space as much as its inhabitants. Pieces on the wall include Beck’s illustrations, Valerie’s buttons, and drawings gifted from their friends. A path from the living room to the bedrooms passes through a random foyer space that Beck said they chose to make their “Room of Oddities.”

Beck stood in the dim lighting, her turquoise hair standing out. Oddities surrounded her—a seamstress’ mannequin for shaping hoop skirts that came from their grandmother’s basement; a colorful stained glass lamp; China dolls, an antique globe, and string of lights. A closer look at what appeared to be the bottom half of a shopping mall mannequin showed that it was actually an original plaster mold of someone’s body from the waist down. Beck explained that they found it on the curb after someone threw it away.

“We definitely want to get more people into the space,” Valerie said of their plans for coordinating Sol for Art programing and community projects. She suggested a string of events that could include anything from continuing the “Sketch and Chill” nights hosted at the house to a murder-mystery dinner to debut the apartment to guests. 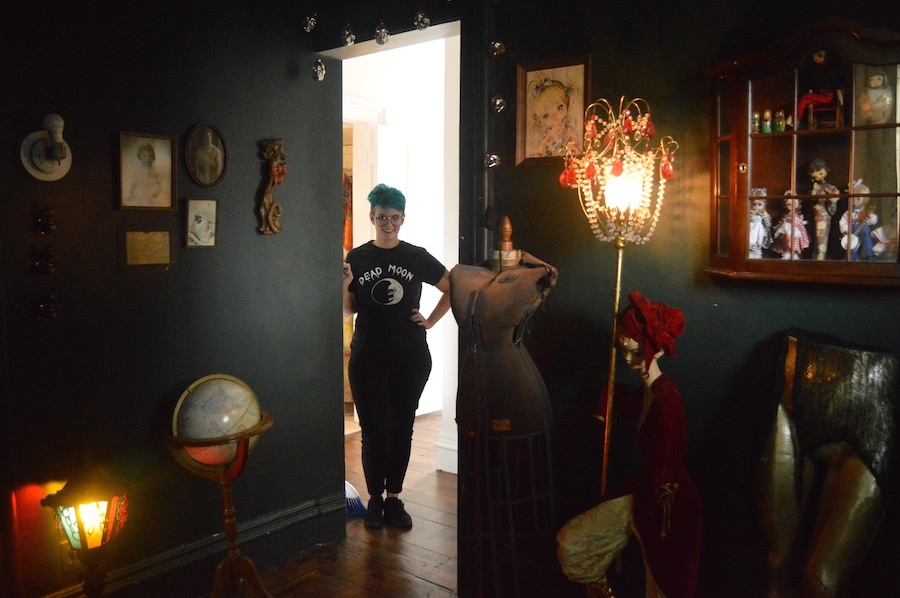 Beck in the "room of oddities."

After stints in Fairfield County, Bridgeport, and Hamden, the two said they are excited to be part of New Haven’s arts community.

“I’m starting to pick up steam on social media,” Beck said. “But I seem to meet the right people now that I’m here.”

Her work at her tattoo studio as well as her position at the hair salon bring her people who are artists or know artists. Valerie has found colleagues through her own work at a restaurant. Much like their new residency, New Haven seems to be guiding them into an artist network.

The sisters are planning a craft fair in the fall.  Not only will the fair provide functional art for those interested in buying fewer tools and jewelry from stores, but it will also feature local artists.

Often, they said, “local” fairs in New Haven and Connecticut also include artists from Brooklyn. That is not a bad thing—The Tiny Hobo has exhibited at Strange Ways’ Flair Fair—but “It would be so cool to have an event with just Connecticut people.” They added that the rich arts scene that continues to open itself up to them should be accessible for artists and non-artists alike.

“I want to put this place on the map,” said Valerie. “Give back to Cleveland what he gave us.”