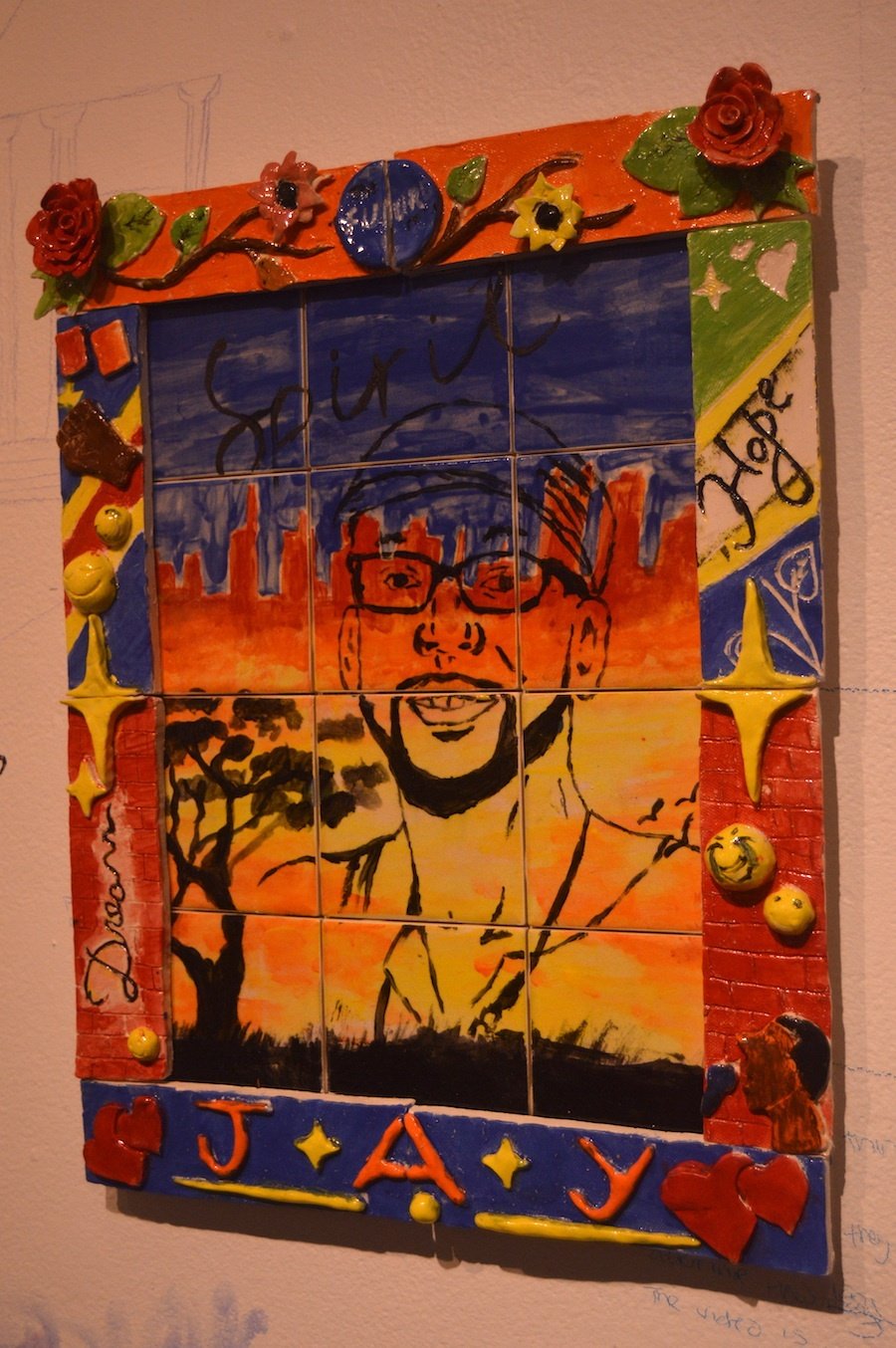 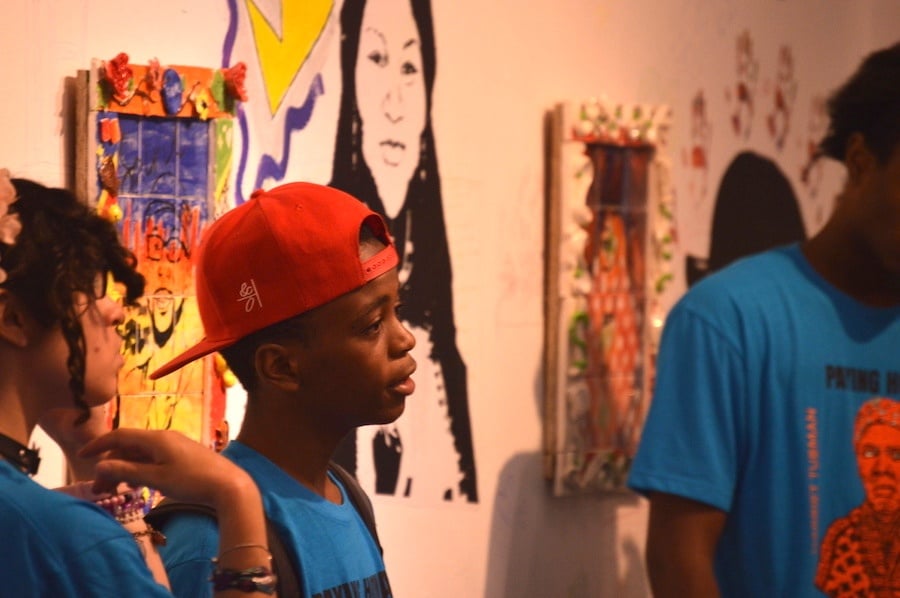 Amie Mulungula. His hero, Jay Kemp, is pictured behind him. Karen Marks Photo.

Dymin Ellis stood in the gallery, surrounded by a mural of splashed paint, markers and ceramics.

“Dear white liberals,” her voice rang out the hundred bodies that had gathered there. “You are just as white as Donald Trump.”

As they had for Ellis, a former summer apprentice who is now a fixture in New Haven’s spoken word community, readers quieted the audience with their words. Ears perked up. Eyes swiveled to focus. The voices that followed Ellis’ read longer poems that bounced off the very ceramic portraits that inspired their words. Threads of Spanish wove through the audience, dotted with members from Unidad Latina en Acción and families from across the city.

“Immigrant — undocumented, unknown...we are not illegal,” read one student.

“You believed in me,” declared another.

SAP teacher Carly Gove said that the program—for three weeks, three hours a day, apprentices have been training in both ceramics and spoken word—encouraged the students to become more adventurous artists. Under Lugo, Gove helped with making tiles and managing clay for the program, but also workshopped poems with the students with the assistance of The Word’s Aaron Jafferis.

Just after 5 p.m. Friday. Lugo quieted attendees by dropping a penny on the ground. “We can only start if you can hear … this,” he said. Within minutes, poems criss-crossed the room as apprentices in blue t-shirts recited their lines in clear, high voices that gained confidence from the past three weeks.

“It took a lot of practice,” Gove said.

For Roberto Lugo, the use of ceramics with spoken word was as symbolic as the project itself. Speaking at the opening, he said he had chosen pieces emblazoned with hero likenesses in part because “there’s a lot of failure in ceramics.”

Lugo added that his idea was to pay homage to the inspirational figures the apprentices chose. Tile murals ranged from images of Freddie Mercury to Ruth Bader Ginsburg. Some of the inspirational figures also included adults close to the students, such as Amie Mulungula’s mentor Jay Kemp, who directs The Future Project in New Haven. Mulungula moved from Tanzania to New Haven during middle school, and upon entering high school, was still as unsure as any freshman would be.

“He gave me emotional support...he believed in me,” said Mulungula of Kemp. His background includes the city skyline and Tanzanian sunset. Around his rendering of Kemp, he included emojis and inspirational words that he associated with Kemp’s leadership, , including stars, music notes, and abstract representations of “dreams” and “hope.”

Natalia Maria Padilla Castellanos made a mural of John Jairo Lugo, founder of Unidad Latina en Acción. An immigrant who moved to America when she was younger, she found inspiration from seeing a strong Latino support others. As for her spoken word poem, she wrote what she was feeling.

“I’m tired of being ashamed...we’re not aliens, so stop treating us like parasites,” her voice rang out in the gallery. As a child immigrant, she is especially cautious of those who attempt to elevate her above older undocumented immigrants and said as much during her poem.

Castellanos heard about the program through her visual arts program at Educational Center for the Arts, an arts-focused magnet school on Audubon Street. She paints, makes sculptures, and some photography; this is her first time using ceramics.

“I used to play with a lot of play-doh as a kid,” she laughed. She showed the sunflowers and roses along the border of the frame she made, describing how she had to bring some of the clay home to practice shaping it.

She has that in common with her teacher. Roberto Lugo is also a writer, and incorporated the spoken word aspect into the students’ artwork creation.

“It’s important to be a multifaceted artist,” he said. All of the apprentices, with the exception of two, performed poems related to their mosaics—the performance also included a dance portion by Jordan Isaiah Walker and a short film made by Kiyomi Leslie Bowen.

Lugo developed the idea of tile murals from the murals that are often painted in the city to memorialize the deceased.

“But that often gets covered up by the city,” he said.

In a neighboring gallery, 22 ceramic mugs made by Lugo stood on display, depicting an image of each student. Working in three dimensions and using their voices as well as their hands, enabled these artists to create images that will last.