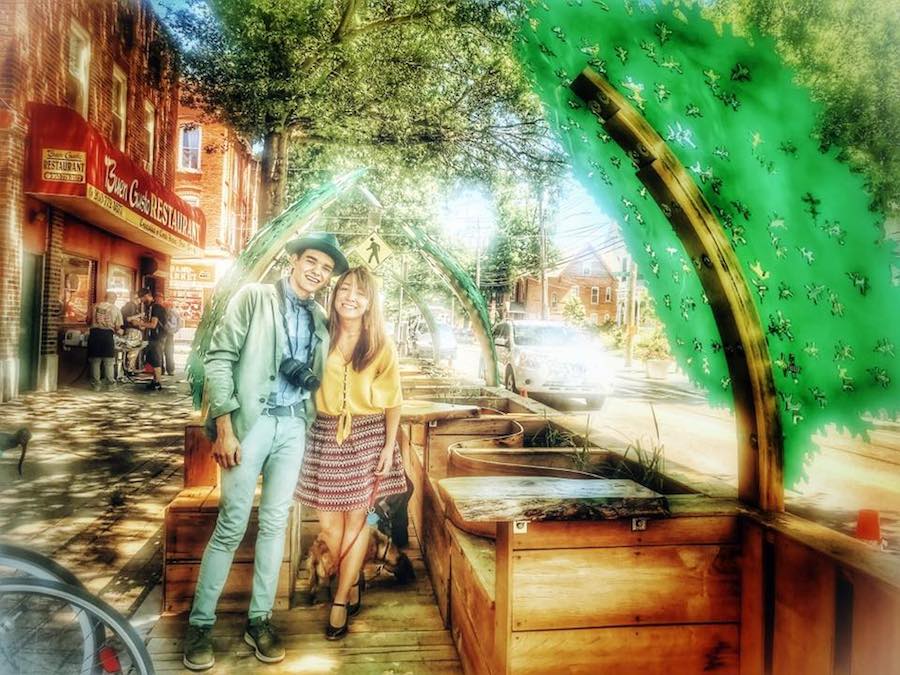 You can see it approaching from either side of Grand Avenue. A unit of outdoor chairs and tables made from local wood. Placards—printed in both Spanish and English—showing walkers how to identify the five most common New Haven trees. A place to sit and wait, or bring lunch from the avenue’s restaurants outside. A “parklet,” offering the experience of nature in a bustling urban environment.

Currently, Semenov said, this is the first and only parklet in the New Haven area. Once snow season comes in November, it will be moved—to where, they’re not yet sure. While Semenov and Leiva received $3,000 from the city for their design, they said they still had to apply for extra grants to fully complete the project. They declined to comment on how much the project ultimately cost (in previous interviews, Semenov has noted that they did not use Yale space because of added costs), but said that the city was helpful with permitting for the space.

Misha Semenov on one of his parklet "work days" earlier this year. Stephen Urchick File Photo.

“We wanted [the parklet] in a community that didn’t have a lot of infrastructure,” Semenov said. He added that he saw, and wanted to address, a need in Fair Haven specifically—Grand Avenue has few readily available benches for resting or socializing on the sidewalk.

There are a few by Christopher Columbus Academy, some scattered at bus stops and by the public library, and a thicket of benches in Chatham Square Park and along the Quinnipiac River. But there are few in between, particularly on that main drag. Enter a central place to sit down, eat outside, or stop for a rest while walking from one part of the city to another.

As the two unveiled the parklet, visitors trickled in. Semenov and Leiva bounced around talking to friends, colleagues, and passersby, encouraging them to sit down and enjoy the parklet as it is, in their view, intended to be used.

“Now you know the black hole I’ve been in for the past year,” Semenov said, greeting one friend. “Well, it’s been nine months in the making.”

The pair’s mentor, Dana Scinto, is a furniture designer who heard about Semenov and Leiva through a mutual friend. She said that when her friend mentioned two students that needed help building a parklet, her first thought was “What’s a parklet?”

“I was just supposed to let them borrow some tools,” Scinto said. “But a few months later, here I am.”

In addition to providing tools, Scinto advised the pair on the shape of the parklet and made the table tops. On site, she displayed how she shaped an ash wood table to look like a natural cut of wood. She noted that’s why you won’t find rectangular or perfectly circular tables the urban canopy. 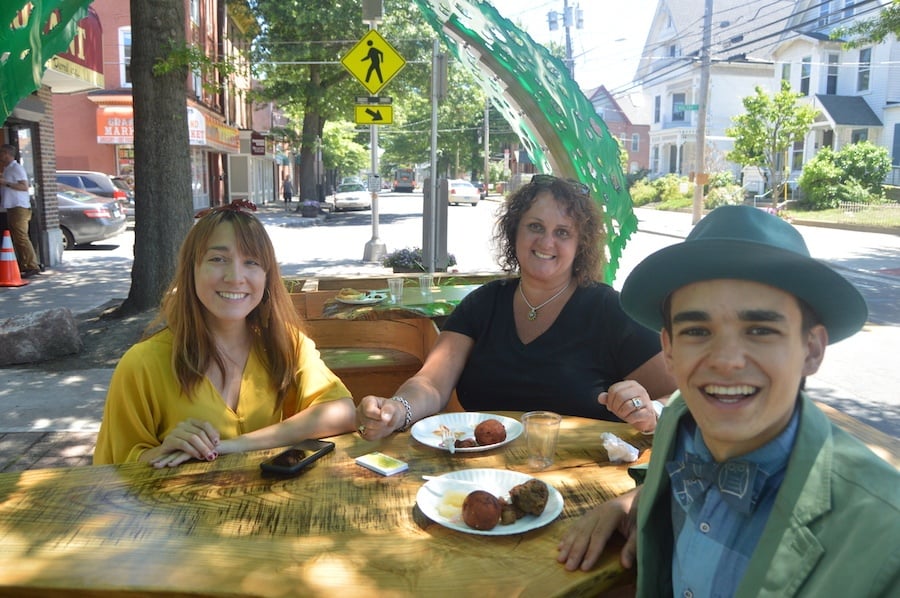 Misha Semenov and Kassandra Leiva, with mentor Dana Scinto in between.

But that wood, Semenov said, is one of the parklet’s main players and “protagonists.” Under the ash tree table, there is a sign that encourages visitors to “Crawl under me!” Below the table is information on beetles that have been killing ash trees in New Haven. The city has also planted rosemary, chives, and lemongrass in garden beds behind the backs of the booths, and guests anticipated Saturday that pleasant aromas would soon surround the parklet.

It also has been a community project, added Semenov, with parklet work days in Erector Square. There to see the final product, Galina Churkina and her daughter Alina helped out with building the parklet from February. They made the floorboards, backs of chairs, and cut out the stamps of tree leaves on the canopies.

“I did the nails!” Alina exclaimed proudly.

“I hope it would be good for neighbors to get to know each other,” Churkina said. “I feel like around here neighbors don’t know each other as well.” She said she hoped the concept would expand to other New Haven neighborhoods.

She was not the only one with the idea. A woman from West Haven passed by the parklet, taking photos and asking where she could request one in her neighborhood. In a follow-up comment on Monday, Westville artist Lesley Roy mentioned that she'd like to see one in her neck of the woods, too. Leiva pointed out the diversity of parklet designs across the U.S., suggesting that the project is only a sort of beginning.

“We went on a tour of San Francisco parklets and they're nothing like ours,” she said to friends, before walking over to engage two men who sat at the parklet to enjoy their meal from Buen Gusto. Around her, the parklet buzzed, melding into the landscape.