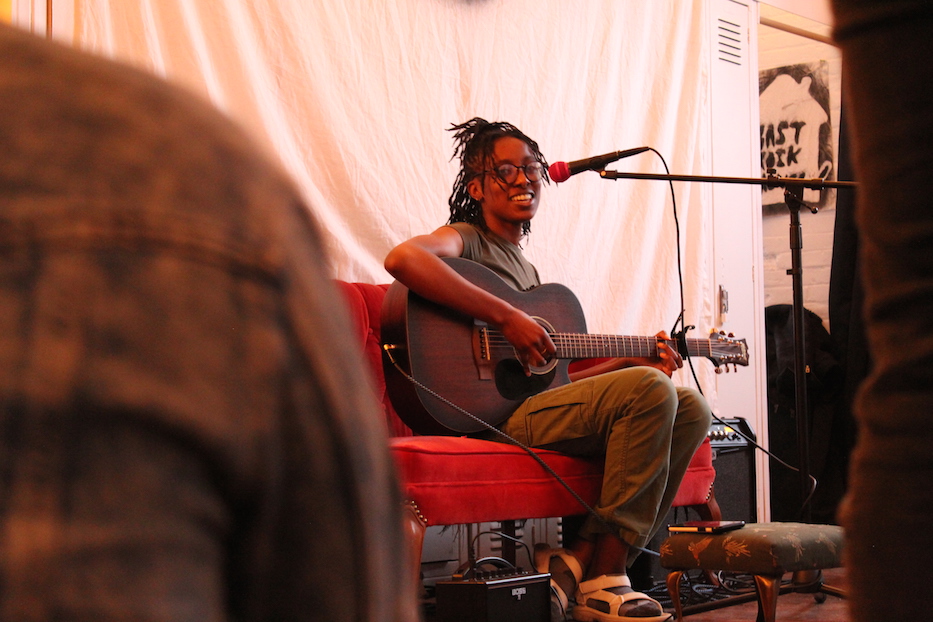 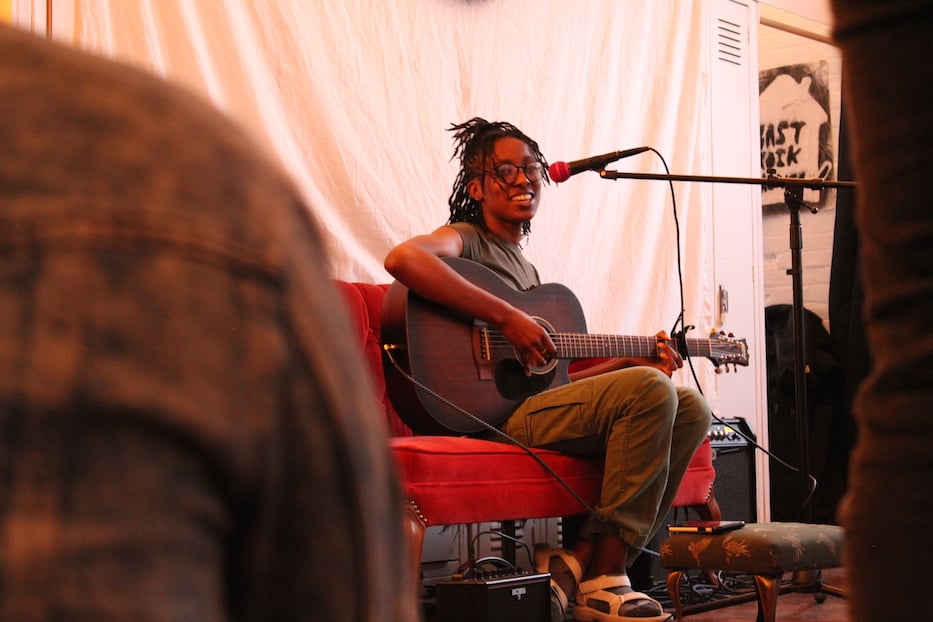 “Everything I need, is on its way to me, everything I need flows like water to me,” sang New Haven singer-songwriter Ro Godwynn, repeating the chorus in a tender, enchanting voice.

As they played, the crowd of around 40 people—some seated, some standing—moved their bodies gently to the music. Sitting cross-legged below Godwynn, Luke Devereux sang along on a lower octave. The crowd caught onto the melody. What was a single voice became a chorus.

“Is this choir?” someone in the audience quipped. Laughter ensued.

It took place in Erector Square’s Studio i, shared by the artists Jennifer Rae and Christina Kane. 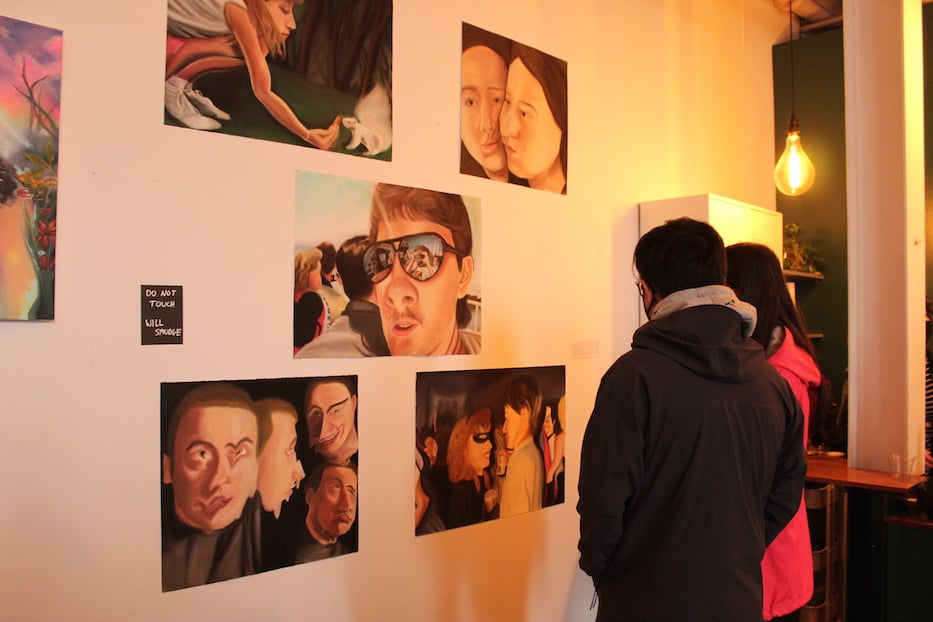 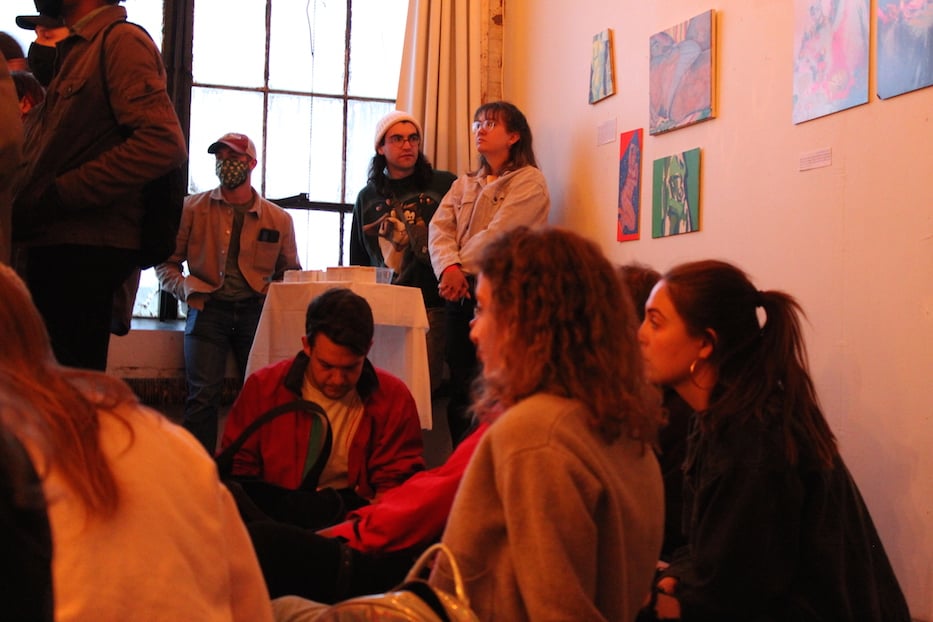 East Rock House began in 2020, at the height of the pandemic. At the time, Luke Devereux moved to New Haven’s East Rock neighborhood from Chicago to pursue a Ph.D. in molecular biology. A singer-songwriter in Chicago’s DIY music scene, Devereux wanted a space to perform amongst other trans and queer musicians. Although Devereux didn’t know it at the time, it turned out that other trans and queer New Haveners—more than they realized—were seeking the same thing.

“Starting East Rock House and having people show up to events and describe the same experience of not knowing there were this many trans people around,” Devereux said. “We all were like shocked to see each other, but like delighted as well. … And I’ve been shocked that the community here that we’ve formed is so vast and so tight now, that it’s just amazing to see all these people.”

Like Devereux, Ashley LaRue was one of those queer New Haveners who was also seeking community. Growing up in New Haven’s Hill neighborhood, LaRue felt like she didn’t have a space where she be with people like her: people who were Black, female, and queer. In the past three years, that feeling led her to found Qommunity and explore outlets for Black, queer healing in and through her own photography. Her 2019 series The Courageous Project looks at her own intersections head on. 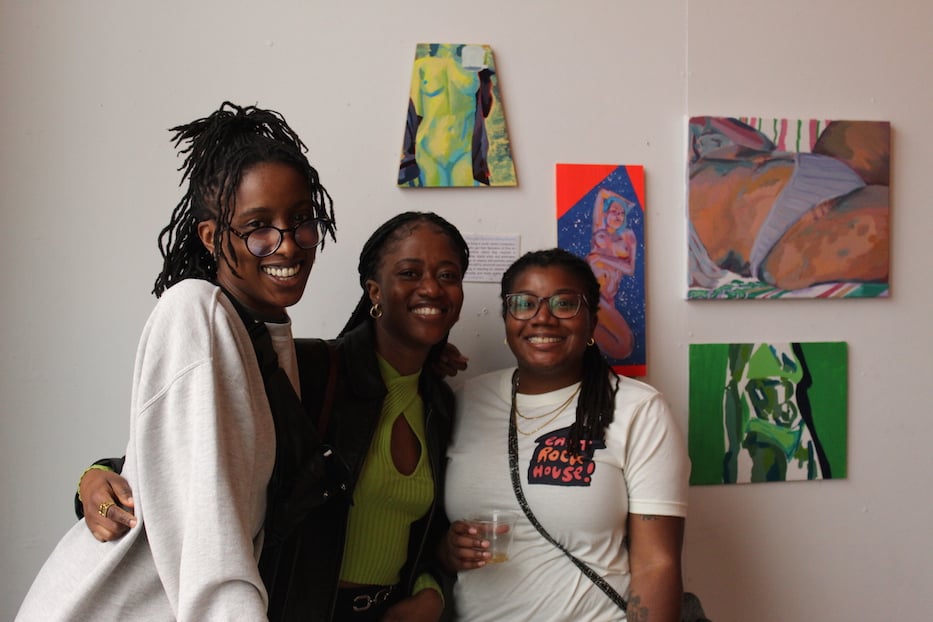 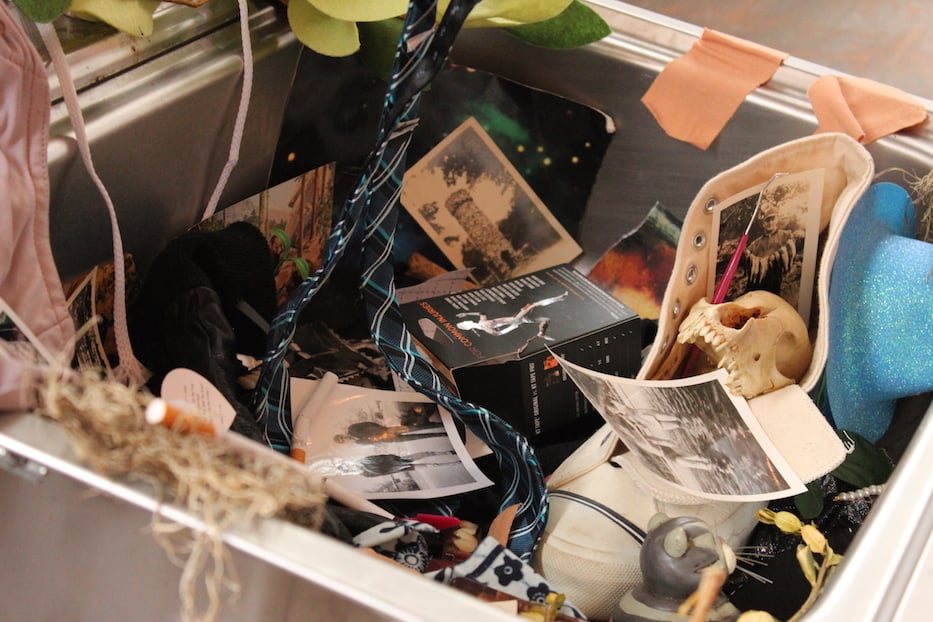 Other spaces, like the gay bars Partners and Rize, seemed oriented towards older white gay men, LaRue said. Starting her own organization—Qommunity, which centers Black queer healing projects—was her answer. So, too, was joining the East Rock House team.

Besides Devereux and LaRue, East Rock House is led by three other local organizers, many of whom are artists and musicians: Marianna Apostolakis, Evelyn Gray, and Julian Russo. 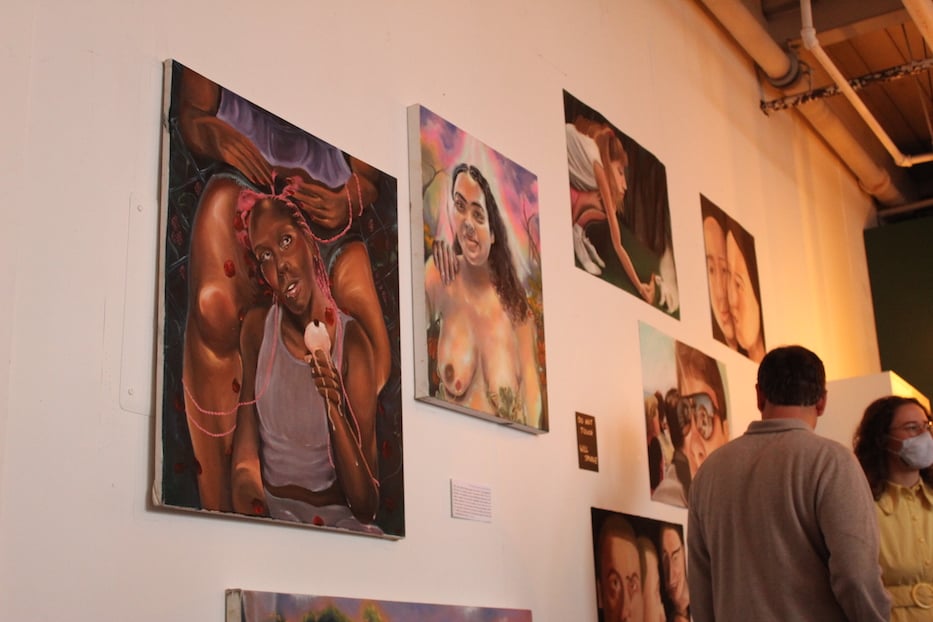 By the second hour of the event, the party was in full swing. Trans, nonbinary, queer people and their allies roved around the light-filled studio. Conversation and laughter spread steadily. Godwynn and Sweet & Sounds Founder Angel Dahfay were stationed across the room in front of a table of homemade soaps. Christina Jones chatted with friends in front of their three paintings on view. Close to their side was their partner Jasmine Chévere Colón.

In Jones’ oil painting Madame & Eve, a topless female figure directs a soft gaze at the viewer. Light dapples her café con leche skin. Her hair flows, long and wild. An expression of contentment catches on her lips. A cotton-candy colored sunset explodes into a halo around her head. It is a secret world, where queerness, Blackness, and nature intermingle—unburdened, wild, and divine. It is an ode to Black queer femininity.

The muse in the painting is none other than Jones’ partner Chévere Colón, who she fondly refers to as “her Eve.” The series The Garden of Eden re-interprets the Garden of Eden as site of queerness. It was part of Jones’ senior thesis in Painting at Southern Connecticut State University. 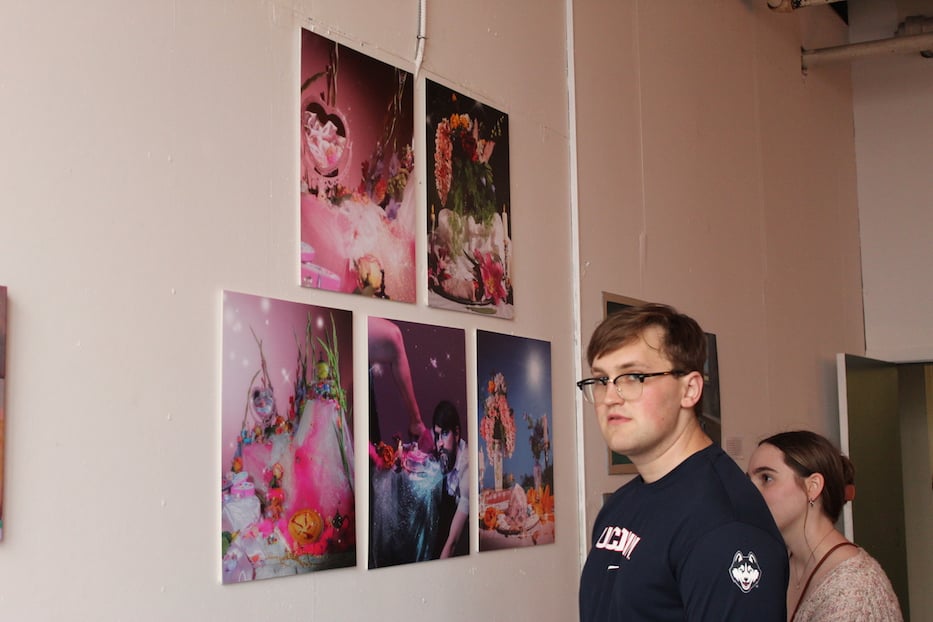 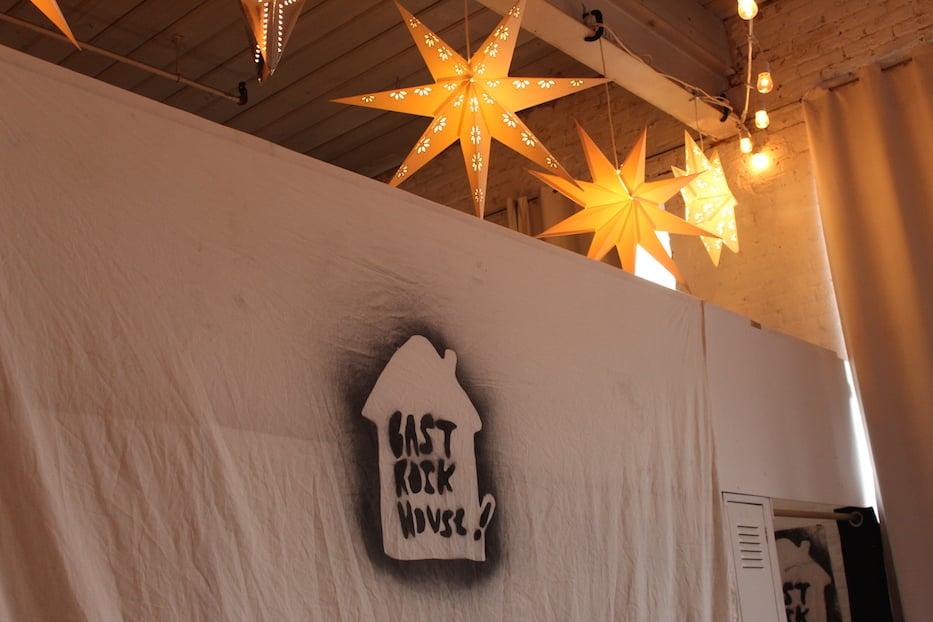 On an adjacent wall hung five ink-jet prints from Max Pollak’s series Femmetropy, which Pollak created to process their gender transition and the struggles that preceded it. Like Jones’ work, in Femmetropy, an entire world is nested into the boundaries of each print.

At first glance, the bottom-right-most print describes a paradise. Signs of a lavish feast—already consumed, presently abandoned—are scattered across a table. A bouquet of multi-hued flowers spills over the lip of a Greco-Roman vase. Heavy gold candlesticks frame both sides of the table; hardened candle wax clings to their figures. In the center is a baking mold stuffed with bright pink—pig’s feet. Half-eaten shrimp litter the table.

Linger over the print and the scene’s hyper-saturated colors—mauve, salmon pink, and imperial blue—become intoxicating, sinister. The star-shaped lens-flares, added on with Photoshop, start to crowd the eye. And the artificiality of the scene—the fake flowers, false backdrop, and the gelled lighting—begins to reveal itself. 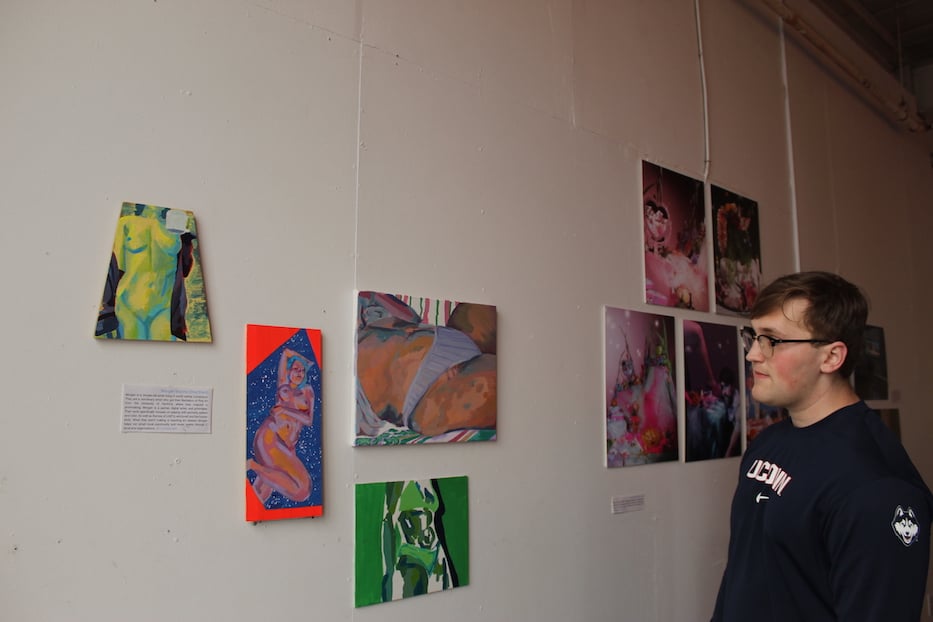 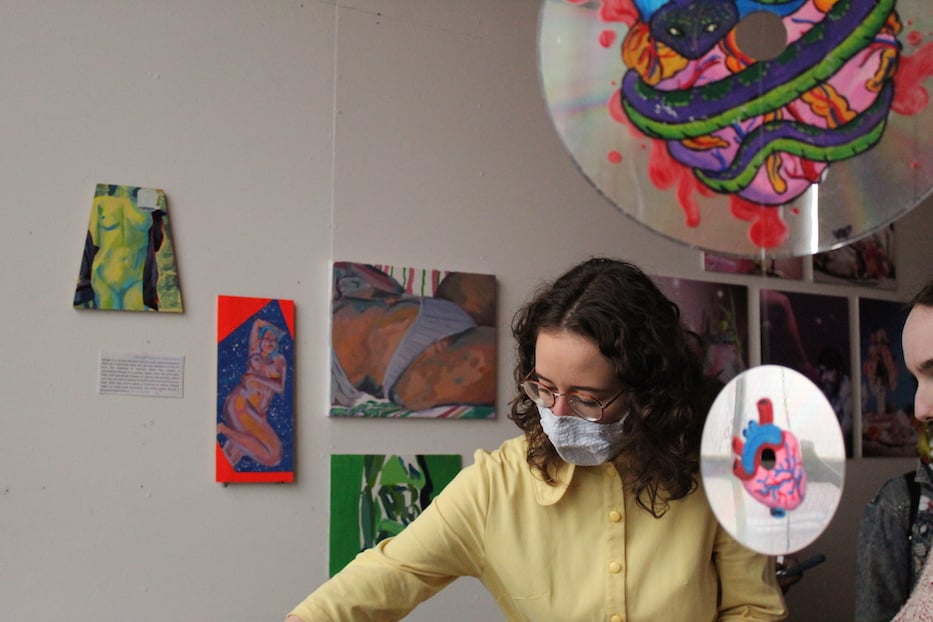 Top: Morgan Bayana's paintings deal with witchcraft and the human body. Bottom: Allison Wrogg checks out at the soaps for sale.

As the clock approached 8 p.m., Godwynn set their electro-acoustic guitar beside them on the velvety green couch. The sun was nearing the horizon, and Studio i turned warm and intimate. In a tender voice, Godwynn sang to a pre-recorded R&B beat infused with flute flourishes. The song was "Choices, ft. Dylan Olimpi McDonnell," off their 2019 three-track E.P. “The Godwynn Experience Vol. 1.”

“I made a choice I would never regret / I said that I won’t give in to it / gave it my all. Gave it my all,” Godwynn intoned, their voice languid and searching.

As their voice trailed out, the crowd was suspended in a meditative silence. Then attendees rose, and cheers, applause, and a sense of closeness filled the space.

“Queer art is so powerful and needed,” said Rae, who lent her studio to the event. “I think queer artists and queer people, I think we need each other, and we need to be together. I just think the whole society benefits when we do events like this.”