At Albertus, "Global And Grateful" Spotlights A Growing Community 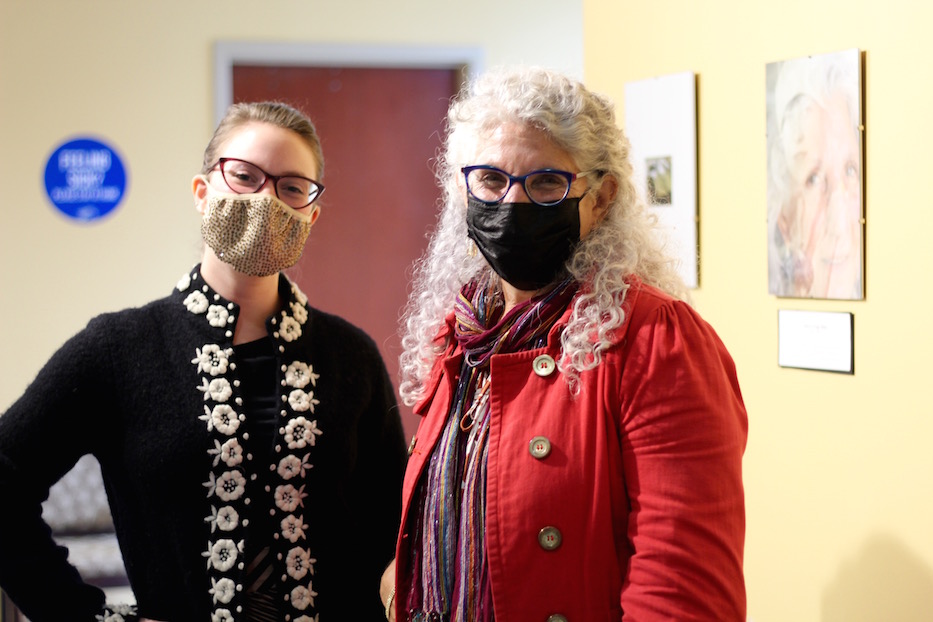 The woman in the photograph looks out onto a narrow hallway, eyes soft as her face shifts into focus. Her lips are pursed but not angry, as if she is on the cusp of speech. Her curls undulate as they gather around her cheeks. The longer a viewer looks, the more depth there is to her face. She’s not one matriarch but many, layered onto each other. On her left and right, mirror images of her daughter, granddaughter, and great-granddaughter bloom across the frame.

Emily Scranton’s Six Generations is part of Global and Grateful: Genuine Portraits of Many Lives, up for the next several months at Albertus Magnus College. The show brings together portrait photography and work from graduate students and alumni in its art therapy and counseling program for a reflection on an increasingly global campus in an equally globalized world. The installation lives between the Hubert Campus Center and nearby Walsh Hall.

Organized by Professor Abbe Miller, it coincides with Founder’s Day, commemorating the school’s opening in September 1925 and the convocation of the school’s centennial class this fall (this year’s freshman will graduate in 2025). Visitors are welcome on the campus as long as they follow Albertus’ Covid-19 protocols. 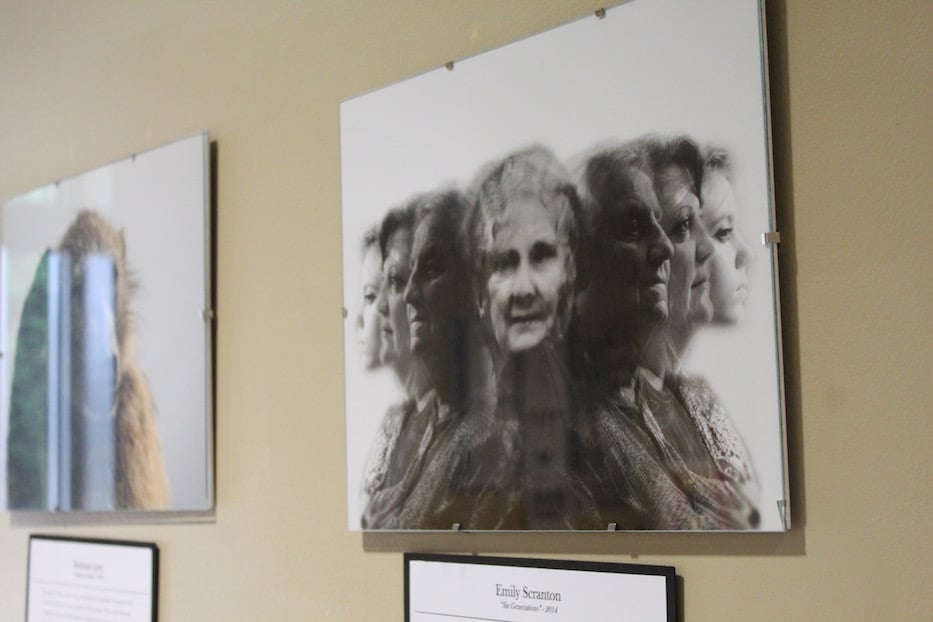 Emily Scranton's Six Generations. Since completing the work in 2014, she said its meaning has changed for her.

“This year’s Albertus Magnus College Founders’ Day exhibit welcomes a juried selection of portraits that genuinely reflect gratitude for global co-existence,” reads an introductory text from Miller. “By capturing faithful reflections that go beyond physical characteristics, these portraits will convey the intersectionality of the depth of human nature; evoking human compassion and connection that will deepen our individual visions of humanity.”

Global and Grateful is spread across two buildings, with a focus that travels quite fluidly from the individual to the collective. Past a crackling fire and student lounge in the Hubert Campus Center, viewers are able to walk right up to portraits by undergraduates studying under Jeremy Nevins, a professor of visual and performing arts and chair of the Department of Arts and Communications at the school.

Under Nevins’ guidance, over a dozen undergraduates have posed for portraits and stepped into the role of portrait photographer, each figuring out how to sit, strike a pose, and capture each other in the process. The result is an intimate viewing experience, where students all but peek out from their frames and ask a viewer to stay a while. 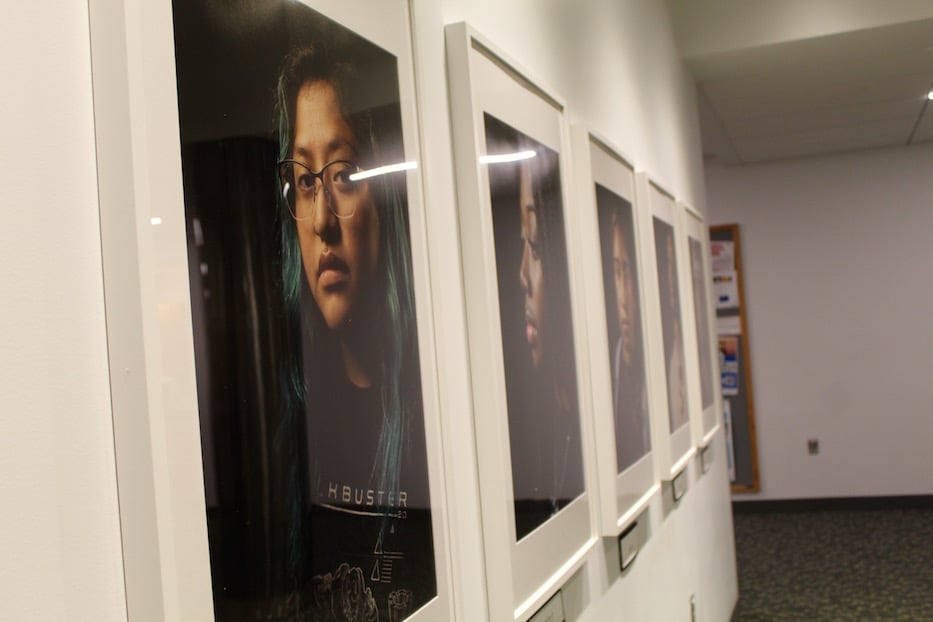 Each is printed in lush, saturated color on glossy paper, and each bears the same black backdrop. But the portraits don’t feel monotonous: student sitters and their peers-turned-photographers experiment with poses, trying out front-facing, profile, and three-quarter rotations. Some look right at the viewer while others introspect or focus on something beyond the frame.

They come as they are, with green hair and blonde highlights that are growing out, glittering studs and eyes that are big and wet as the camera clicks into action. ​​Junior Bre Saldivar gives the camera a guarded stare that is hard to put a finger on—not quizzical, but not entirely trusting either—asking a viewer to come in for a closer look. Beside Saldivar, senior Blake May has a kind of far-off, almost beatific focus, fixed squarely on whatever lies ahead.

In a few, sitters have left didactic clues to who they are, and what they want to tell the person on the other side of the frame. In Ashlee Feliconio’s portrait of Ashley Angeles—both seniors at the school—Angeles includes that she is proud of her Peruvian heritage, and the country from which both sides of her family hail. Photographed by Angeles, Feliconio shares that her maternal great grandparents were Italian immigrants. Together, the two create a sense of cultural cross-talk on a campus that is becoming increasingly diverse by the year.

The works are inherently collaborative, catalysts for student-to-student and student-to-viewer dialogue that may not have happened otherwise. Because of the reflective glass and dark, satiny backdrop against which photos are shot, viewers also see themselves reflected back through the faces, as if they are implicated in these young people’s futures. In turn, the works also glint off of each other, giving the students a sense of interconnectedness.

Down a short walkway, a second part of the exhibition unfolds in Walsh Hall, a squat brick building that has become a provisional gallery (Miller said that the school does not yet have a dedicated gallery space, although she would like to see one). Inside, the walls teem with photographs from current and former students in Albertus’ graduate program in art therapy and counseling, one of just a few dozen in the country. Miller, who chaired the program for several years and is still a professor in it, said that the program’s “lovely, lovely blend” of visual arts and psychology makes it feel fairly unique, and lends itself to the kind of work in the show.

In working on Global and Grateful, Miller asked first year graduate students to take portraits of each other without featuring faces—a skill that often translates to discreet and confidential work baked into art therapy. Across the walls, students have taken on the project with gusto: there are portraits of natural objects arranged in humanoid shapes, cards and candles fanned out across the ground to show natural and supernatural belief systems, pendants hung gracefully on shells and paintbrushes. None of the photographers' names are listed, in what becomes a sort of silent pact with the subject and the viewer. 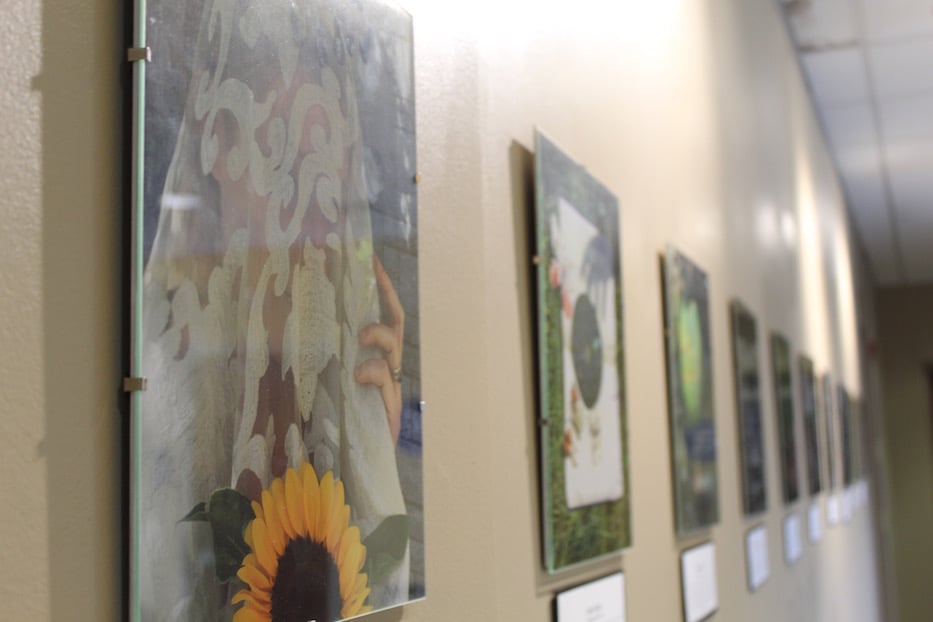 In a portrait that grabs a viewer, an embroidered veil and bright, bursting sunflower stand in for Rebecca Tudor, a first year graduate student who reflects on the Romanian saying ​​Casă de piatră, or “house of stone.” In the photograph, she reaches up to touch the veil with her left hand, fingers pausing on the fabric as she looks downward. Only glimpses of her peach-colored skin are visible underneath.

“It [​​Casă de piatră] is often said to newlyweds to wish them a strong marriage,” she writes in an accompanying label. “I am grateful to have married by choice and for love. Many people—women especially—do not have the privilege.”

The works are both effective and affecting, asking a viewer to readjust their notion of portraiture. In Stephanie Herrera’s Pieces of Me, a spray of brushes and paint tubes sits at the upper lefthand corner of a blue mesh jersey. Just inches away, the flag for the Dominican Republic looks out, with the name of the small Caribbean country printed above it. A turtle-shaped charm makes his slow procession along twists of purple yarn, as if he is treading a path to the other side of the jersey.

Stephanie Herrera’s Pieces of Me.

A snapshot from a 3D ultrasound sits below, with a vial of tiny, delicate white shells that has been tipped on its side. Together, they paint an image of Herrera that feels, even without her face, very full: she is a mother, artist, lover of nature and water and sand, proud of her Afro-Caribbean heritage. In a time where masking up is still the rule, and not the exception, it presents a different paradigm for seeing someone.

Miller also involved alumni back for the show, and the collection of works feels fuller for it. Scranton, a lifelong West Havener who graduated from the program earlier this year, submitted her 2014 Six Generations after hearing about the exhibition from her former professor. Her education keeps pulling her back to New Haven: in addition to Albertus, she is a proud graduate of Betsy Ross Arts Magnet School (BRAMS), Hill Regional Career High School, and the University of New Haven.

In the work, a woman looks out onto Walsh Hall, her face etched with time as it blurs and warps at the outer edges. She is, in fact, a digital composite of many women, of which the face of Scranton’s great-great grandmother Orly is the most prominent. When completing the project seven years ago, the artist sent her maternal grandmother on a fact-finding mission to dig up portraits of past matriarchs. The final image, printed in greyscale, has a kind of archival quality that fits its eye toward history. 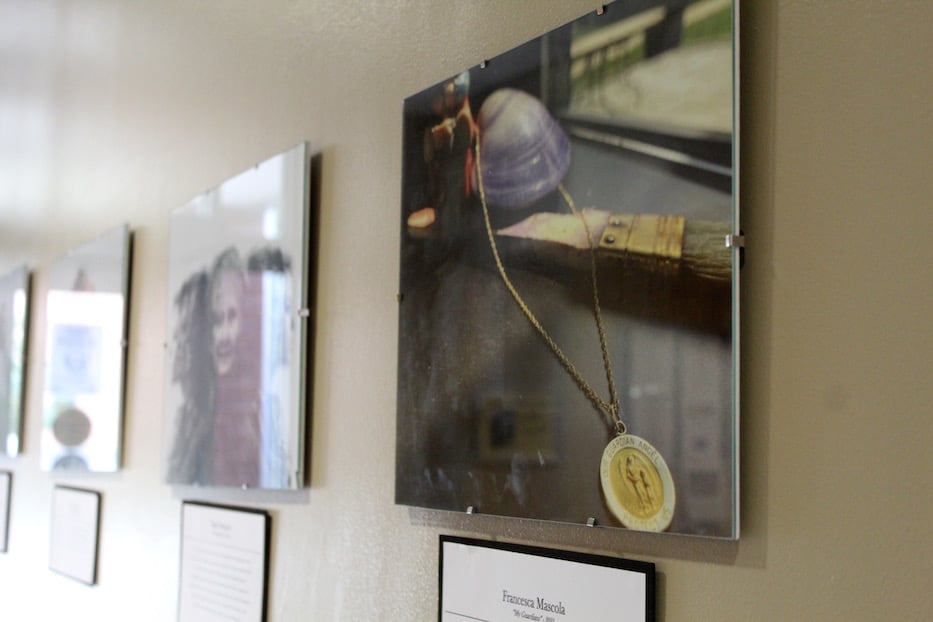 Scranton said the work has evolved with her over time. When she first completed it, she spent time “looking inward,” thinking about her own lineage and “what it meant to be a descendant.” After moving to Connecticut decades ago, her grandmother worked at “the telephone company”—probably Southern New England Telephone (SNET), Scranton thinks—training fellow employees on how to use the system. Her mom is also an educator of sorts: she trains faculty and staff in information technology at the University of New Haven.

Now, Scranton is working in service to others too. In the portrait, she is the final face in a line of faces, accompanied by her mother and grandmother. She was interested, she said, in this idea of a “genetic Eve”—a woman from whom other women in her family sprung.

Seven years after first completing it, she said, the work makes her think about “what will come after” the women in the image, including herself. Scranton’s grandmother is first generation American, born to French-Canadian parents who raised her in Massachusetts. As she gets older, Scranton finds herself pulling out college French to pepper their discussions. She’s started thinking about whether and when she will continue that line of women, all unassuming leaders. In part, she credits Albertus' program with that different way of looking.

“As an art therapist, my eye towards art has changed,” she said. “When I look at other peoples’ portraits, I wonder where they came from. When I see a client, I’m looking at them in a more holistic kind of way.”

Miller, who included a spectral, layered photograph of herself and her grandmother in the show, said there was a “lovely serendipity” to the exhibition. In a nod to multiple generations, her daughter was the one to photograph her.

“As you look around and see these portraits, and the portraits up there [in Hubert Campus Center], I think you feel the story,” she said.