At Beulah Heights, A Bridge to God 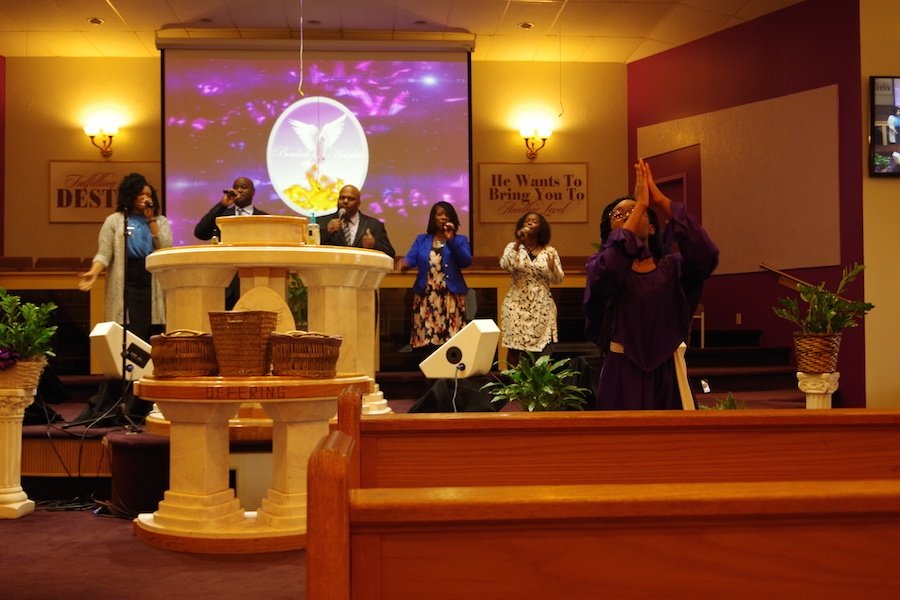 The end of the royal purple cloth flared and spun around the dancers’ legs. The drummer tapped on the cymbals and sounded off the snare drums to the beat. The dancers placed one hand after the other on their heart and then sharply raised their arms upward. They twirled once more with the sound of the choir’s voices.

“I will praise Him. I will sing to Him a new song,” the choir sang as the dancers continued.

So unfolded a recent Sunday at Beulah Heights First Pentecostal Church in Newhallville—home to Gina Caldor’s praise dance team. First established in 1923 with a congregation of only 12 members, the church has grown exponentially in size, today numbering 150-200 worshippers.

Under the leadership of Pastor Theodore L. “Bishop” Brooks, Beulah Heights has tried to discover fresh and exciting ways to draw in all kinds of people. The praise dance team is one of its more recent additions.

At a recent rehearsal, Caldor recalled how the team came to be. In 2009, Alwyn Foster arrived at Beulah Heights as the church’s “young people’s president,” charged with keeping youth invested and involved. Foster, who the church refers to as “Elder,” said that God was giving him the idea for a praise dance team. Calder jumped at it.

“I thought it would be a wonderful thing to do, a way for young people to get involved and be able to minister for God,” she recalled. “We put a proposal together and talked to Bishop [Brooks] about it.”

Initially, the proposal was turned down. Calder said that Brooks did not feel that the church was adequately prepared—it didn’t have the right amenities or space, and it was unexpected from a traditional standpoint.

“It was different than from what we typically did at Beulah and other churches in our council,” Caldor said. But “God...continued to speak to [Bishop Brooks] about praise dance being a part of the worship experience at Beulah and he actually approached us three years later and said, ‘Let’s do it!’”

The pastor reached out to other church leaders to figure out the proper way of going about things. He connected with Adolphus Glenn Brady, a friend of his who is pastor at the New Bethel Church in Kansas City. Women from Brady’s parish helped Beulah Heights to form their team, offering advice regarding costumes, music selection, choreography, and responsibilities.

They also discussed the scriptural support for dance ministry in the Bible. As dancers materialized, Caldor emphasized that it was crucial for a praise dance team to begin and end with prayer regardless of time restraints or the objective at hand.

“We know why we’re coming to do this,” she said. “It’s not about us. It’s not a performance! It’s really about being able to minister to God and the people of God…[The praise dance team needs] God’s inspiration, creativity, presence, power, anointing, and spirit [to be able to dance].”

The group dances every other Sunday and accompanies Brooks on trips outside of Beulah when requested. It does not have to seek approval before stepping in front of the congregation, nor is the dancing specifically planned to correspond with the sermon.

“This is a spirit lead, spirit driven church, so often times you do not know what you are going to preach or what scriptures you are going to focus on,” said Caldor. “God connects all the dots together.”

The team has become highly flexible: it’s capable of choosing music and creating choreography in under two hours when it might have taken the group up to three practices in the past. Team members are also independent, and encouraged to take initiative. Caldor said they can set up and lead a whole dance routine without her. She admits she’s more a role model and mentor to the girls than an out-and-out director, “creating a space where I can see the team I want to see develop … grow.”

This was not always the case. Caldor said she did not expect to lead the team when it was first founded, and was taken aback by Brooks’s request. She described how she was nervous to have so much responsibility in a field she was unfamiliar with.

Caldor praised the two young women from Brady’s congregation who she had visited and advised her. She said they made her feel well-supported and able enough to take on the task despite her hesitation.

When asked if dancing had improved her relationship with God, Caldor responded with a resounding “absolutely.”

“I didn’t set out knowing that was going to happen,” she said. “I don’t know if it’s necessarily dance. I think anytime you get involved and engaged in ministry you have to get connected with God. You are finding yourself in a situation where you are relying on Him … It causes you to really reflect on who God is and what He is capable of doing.”

She went on to describe how the praise dance team’s dancing is a work of spiritual art. It serves as one more way to illustrate the Bible visually. In the same way a picture might be open to interpretation, Caldor said that “though everyone may be watching the same dance to the same song, what it speaks to them is different based on their experience and circumstances.”

When the music ended on a recent Sunday, the man at the piano insisted that dancers and the choir needed to praise the Lord harder. By his request, the music faded back in, the choir repeated “hallelujah” from the song’s chorus, and the two praise dancers continued their ministry.

They extended both arms up to the ceiling and threw them behind their backs. The audience clapped excitedly to the beat. The atmosphere for the rest of service was set.

“It’s a lot of fun,” she said. “It requires a lot of energy. It engages people in a very different way. It is awesome to watch other members of the team really grow and develop!”