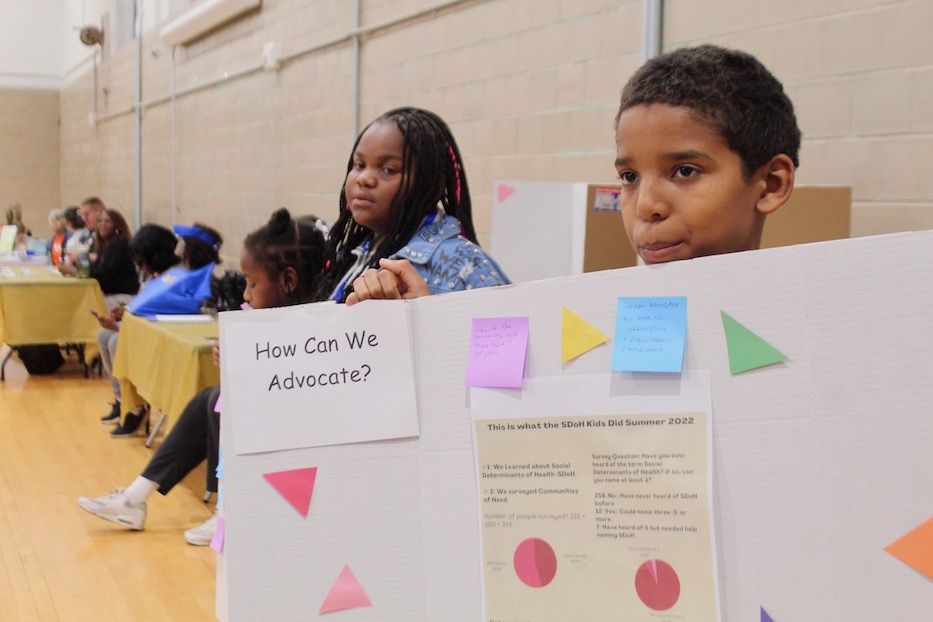 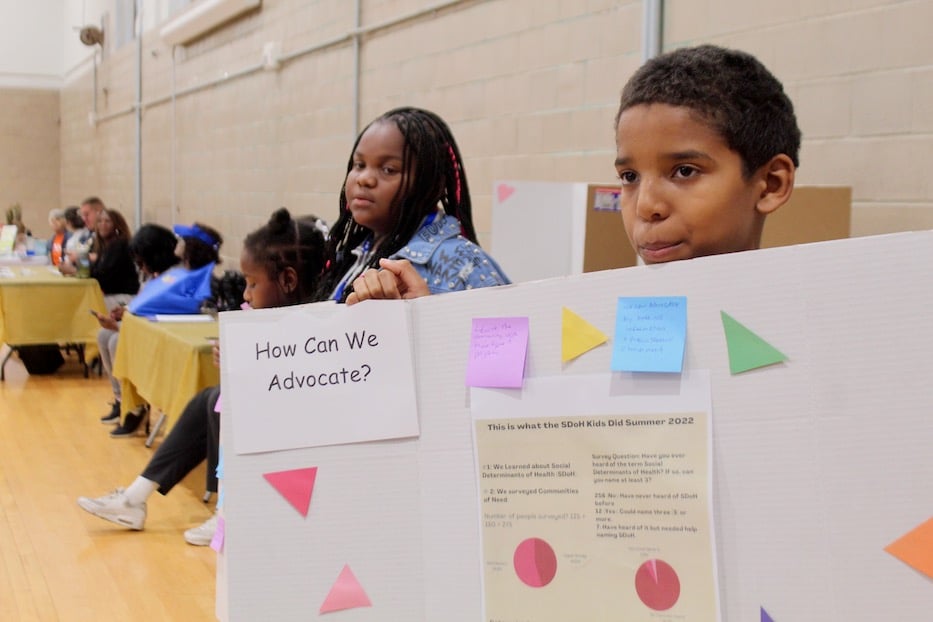 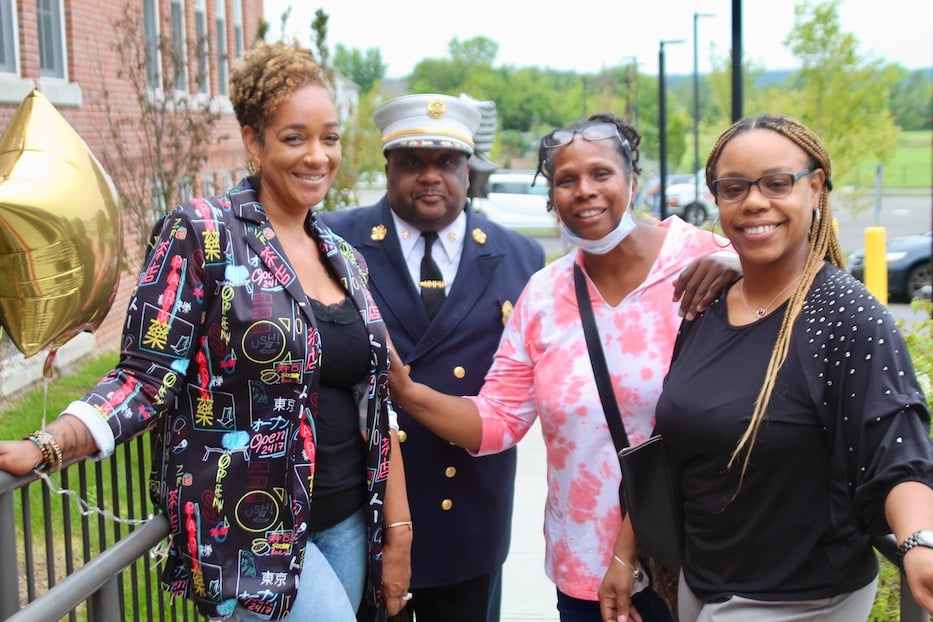 “Today, I stand here with ordinary kids, who have a chance with your help to do extraordinary things that will improve how we live,” said 11-year-old Jayden Bolden (pictured at top). Lucy Gellman Photos.

The right to receive safe medical care, free from abuse or neglect. The right to an education that isn’t dictated by skin color, income level, language barriers or physical and developmental ability. The right to play freely outside.

The right to be heard, loud and clear, from the moment a child opens his, her, or their mouth.

Those demands are part of a new, New Haven-born Children’s Bill of Rights, presented Sunday afternoon at the inaugural “SDoH Kids Awareness Summit” at the Lab at ConnCORP at 496 Newhall St. in Hamden. For just over two hours, close to 60 attendees learned about how to identify, address, and break through Social Determinants of Health (SDoH) in their own lives—and are now working to pass that message on.

In public health speak, social determinants of health include where a person lives and attends school, their socioeconomic status and access (or lack thereof) to financial resources, whether and to what degree they have access to healthcare, education, stable housing, and who is part of their community. In other words, how a person’s lived experience and built environment affects their health. 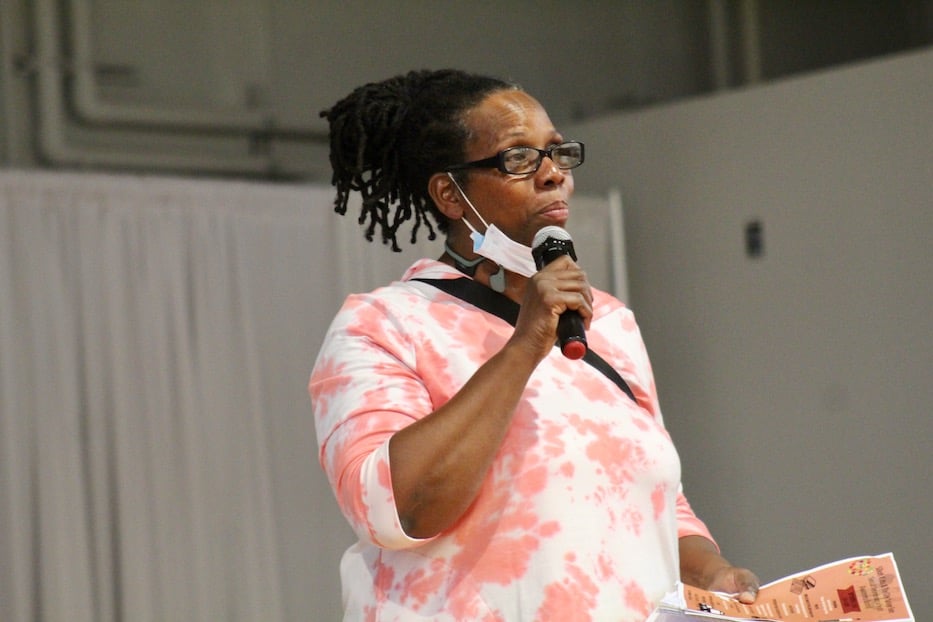 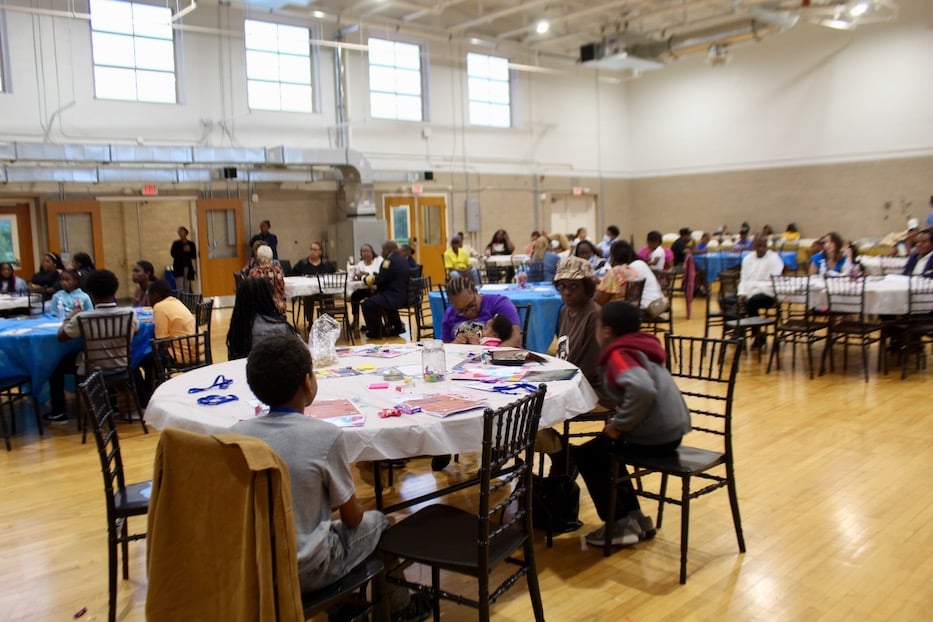 “We need this research right here, and we need this work,” said Newhallville champion Kim Harris, who for months has been teaching her young students at Harris and Tucker School about SDoH. “What are these kids gonna do to intentionally deactivate Social Determinants of Health? How do we break it down so we can have these lessons in bite-sized pieces?”

Harris, with several public health advocates and collaborators Maritza Spell and Yolanda McIver, has been working toward the summit for months. The idea for it was born much earlier this year, when Harris enrolled in a program with the Community Alliance for Research & Engagement (CARE). During a session, she heard the term SDoH for the first time. The words stopped her in her tracks.

The words were a revelation, she said Sunday. She suddenly had a name for the chronic lack of resources that plagued her neighborhood, from underfunded schools and hard-to-come-by fresh produce to citywide disinvestment in Newhallville's streets and businesses. It gave her a tangible way to teach people how their surroundings could literally make them sick.

And if she could teach it, she reasoned, she could also fight it. As an educator, she knew exactly where she wanted to start: young people. 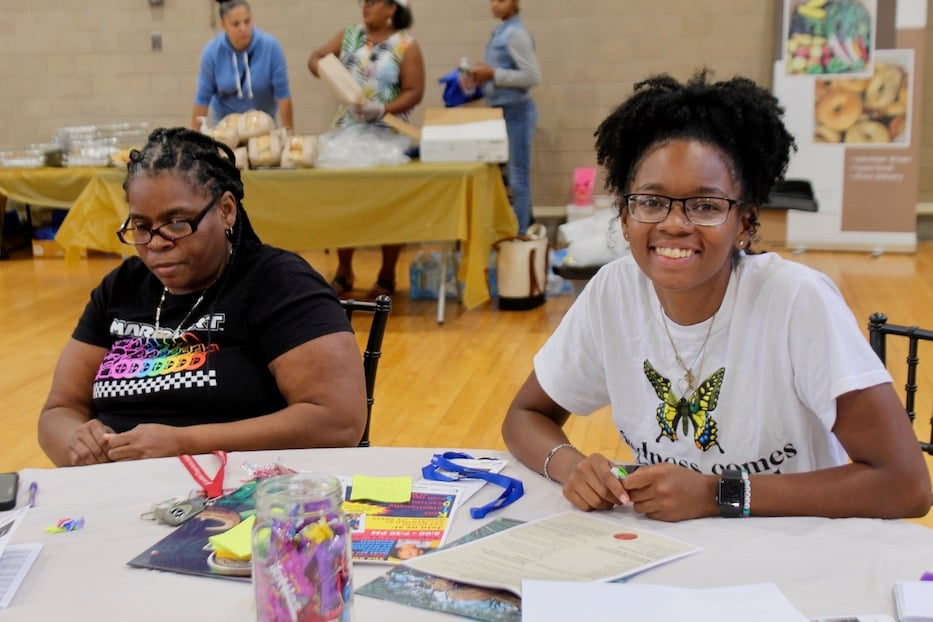 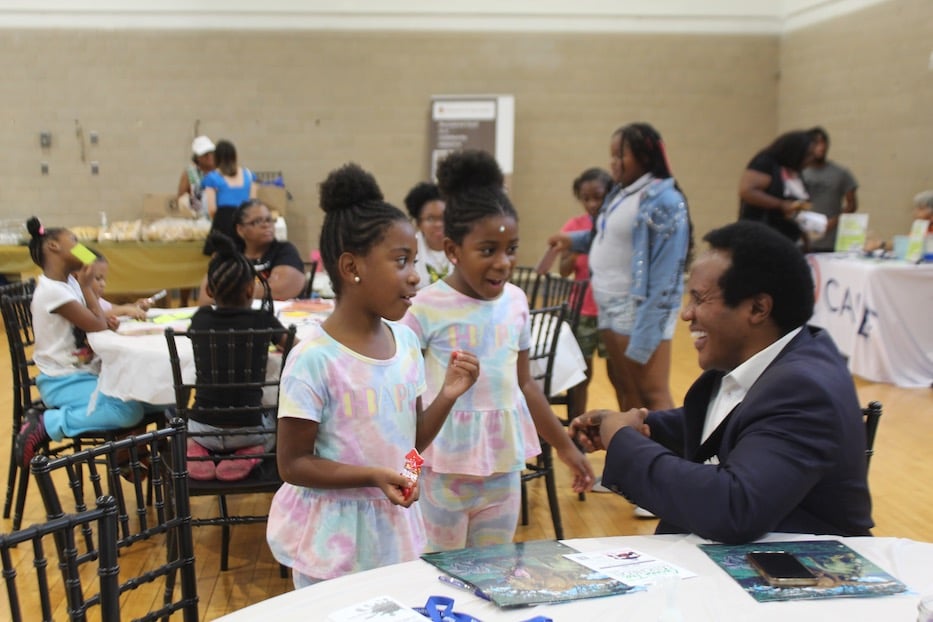 Sunday, she praised Spell and McIver for their partnership on the project, stressing that it would not have happened without them (the two were unable to attend because both had contracted Covid-19). Together, the three called the framework KIDS, short for Kids Intentionally Deactivating Social Determinants of Health. They brought in partners including Monitor My Health, the Community Placemaking Engagement Network (CPEN), Hope Child Development Center, The Green Peacock, and several others.

Starting in June, “youth leaders” in Harris and Tucker’s summer program hit the streets of Newhallville, asking residents of all ages if they could identify social determinants of health in their own lives. Even in the sizzling heat of July and August, they made stops across the neighborhood, talking to people as they ran errands, taught fitness classes, tried to stay cool and even made it to the polls for the state’s closed primary in early August.

In return, they received lessons in fitness, nutrition and public health from members of CARE, Monitor My Health founder Dr. Dana Wade, and The Green Peacock’s Chalia Gilliams among others. They made site visits to Lincoln Bassett, Believe In Me Empowerment Corporation, the Learning Corridor and nearby UrbanScapes Native Plant Nursery run by Doreen Abubukar. Harris shouted out Aizhane Glenn, a college student who lives in Newhallville and returned to the neighborhood through the College Corps in CT summer program. 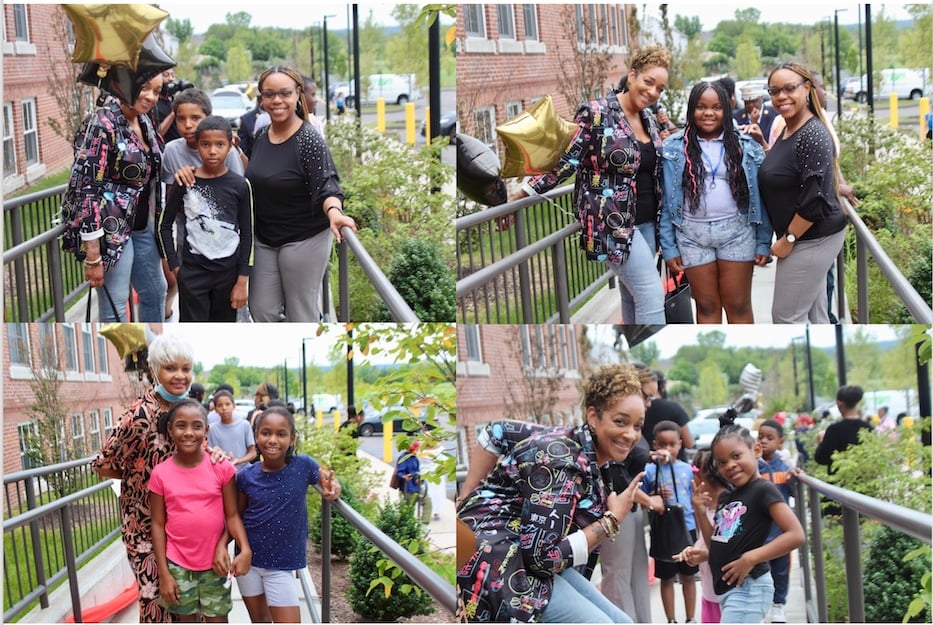 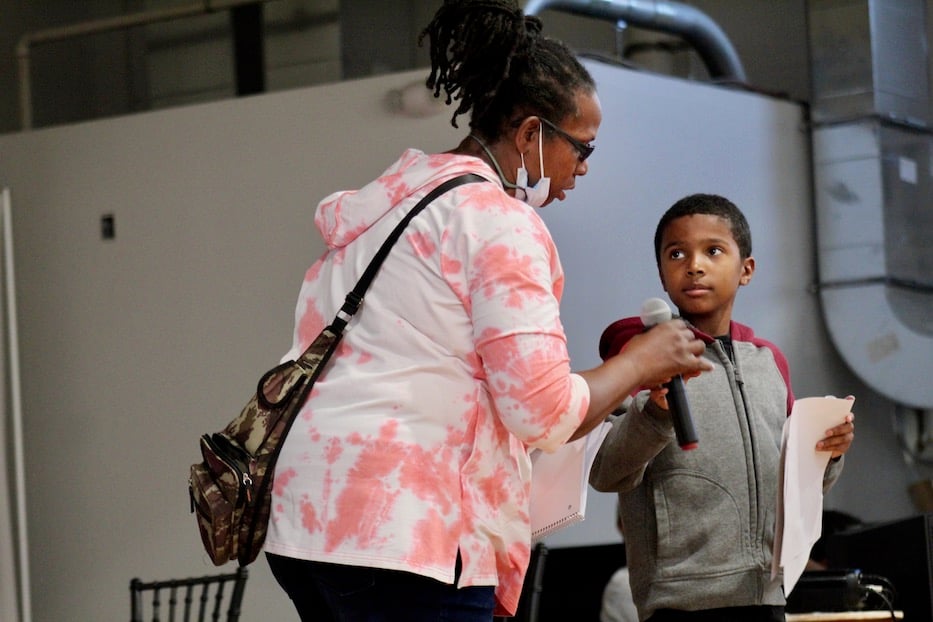 “The big thing is that these kids can really really create lifelong relationships, friendships and bonds,” Harris said. “Now they can look at each other and say, ‘Let's create this new things in our community.’"

Sunday, those words came to life over and over again, from students’ presentation of the Children’s Bill of Rights to a brief keynote from Fire Chief John Alston. Taking the stage with Clifford Beers’ Tirzah Kemp, youth leaders outlined a world in which all children have the same access to play, robust public education, safe and affirming medical and mental health care, and privacy regardless of race, ethnicity, or socioeconomic status.

“Today, I stand here with ordinary kids, who have a chance with your help to do extraordinary things that will improve how we live,” said 11-year-old Jayden Bolden, who lives in Newhallville and just began the sixth grade. “Ms. Kim always says we have to look at where we are now and plan for what we want our community to become in 10 years.”

That 10-year mark is specific, Jayden added. In a decade, he and most of his peers will be able to vote. Watch the video of that here or at the bottom of the article. 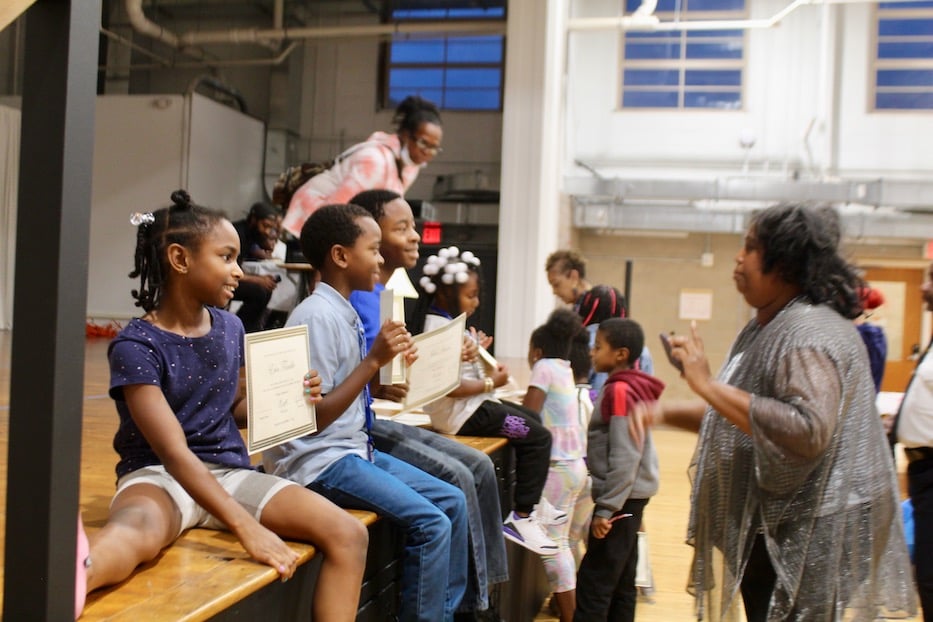 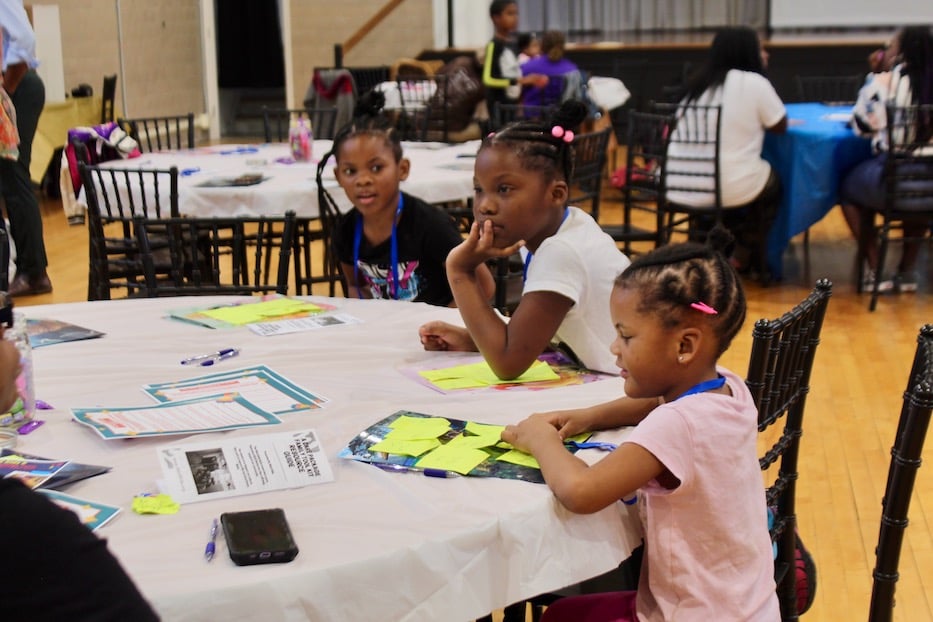 Well before that milestone, they were already talking about ways to make systemic change. Across the room, attendees identified social determinants of health in their own lives, wrote them on sticky notes, and placed the notes on posters set up in one corner. “Lack of education,” one attendee had written. “Childcare access,” another had added. A fourth recalled being a student at SCSU, and not having access to resources to manage their stress or their time.

One note simply read: “Sleep!” It is indeed tied to a social determinants of health: Over time, insufficient sleep can contribute to loss of developmental and fine motor skills, diabetes, heart disease, depression and anxiety.

Toward the back of the space, Glenn worked at a table with a few of Harris and Tucker’s youngest SDoH kids. A criminal justice major at Mitchell College in New London, Glenn heard about the program when she joined College Corps in CT. As a resident of the neighborhood she teaches in, “it’s important to me to help the community,” she said.

She learned alongside the students, she said. Of almost 300 people that students surveyed, she found that 91 percent of them had not heard of social determinants of health. Sunday, she prepared a resource guide and handout with information on social determinants of health and findings in the program. In the accordion folds of the resource guide, names for healthcare providers, therapists, and access to transportation waited eagerly for new eyes. 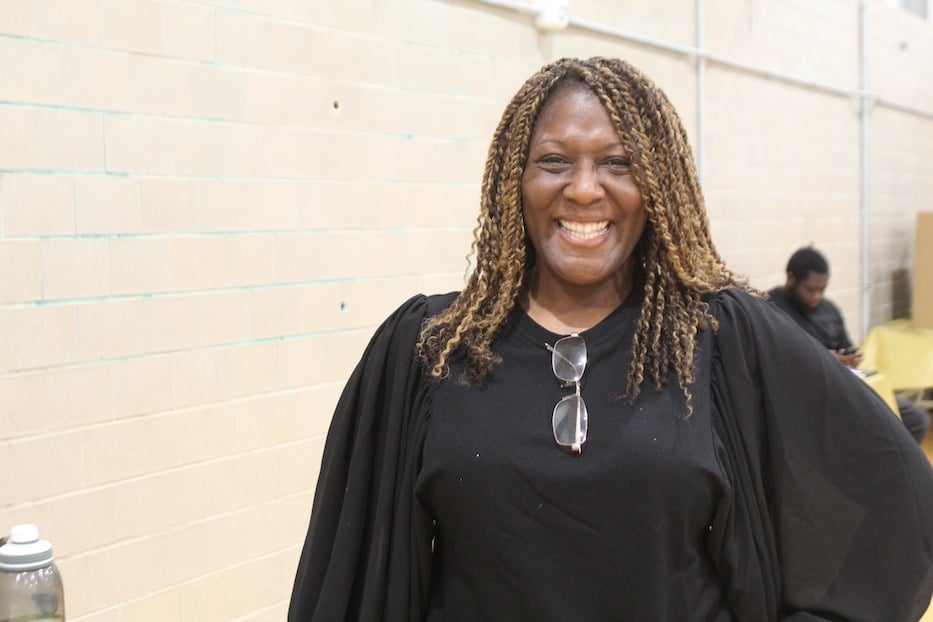 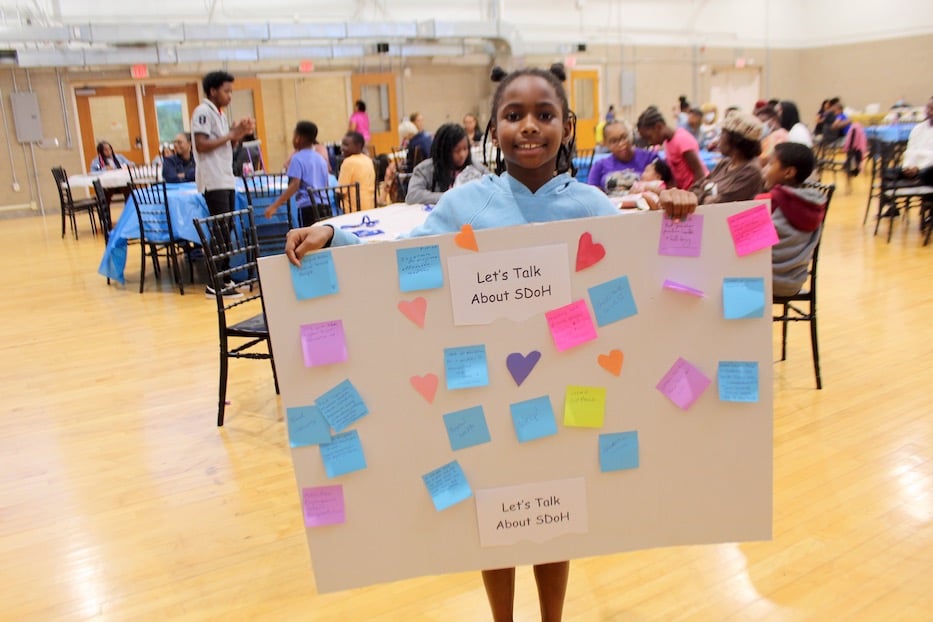 Top: Chalia Gilliams of The Green Peacock. Bottom: Erin Trimble, who is in the fourth grade at King Robinson.

Nearby, Gilliams stood by a booth for The Green Peacock, a fitness and wellness center and nonprofit in Hamden that grew out of her love for New Haven and Hamden. Born and raised in Newhallville, she attended Harris and Tucker School as a child, when it was still Harris’ mother and aunt teaching. After high school, she left for several years—first to go to college in Virginia, and then to live in Atlanta.

New Haven never left her mind: she moved back 15 years ago as a way to give back to the place that raised her. She now teaches programs in fitness, nutrition and diabetes prevention, including after-school activities for students in the New Haven and Hamden public schools. She’s also still very much in the neighborhood: her studio is just over the Hamden line at 138 Dixwell Ave.

“The community we live in, that’s a social determinant itself,” she said. She loves watching students get excited when she tells them that there’s a fitness studio in their neighborhood.

Around her, kids and parents alike dug into the program—and later, into plates of macaroni and cheese, cheesy and vegan eggplant, forest-tinted greens and celebratory cake decorated with the words “Congrats SDoH KIDS + the CARE Package Team." Close to the stage, fifth grader Atorah Walker said that SDoH KIDS has helped build her social skills.

When she first heard the term SDoH, “I was confused, concerned” about what she was hearing, she said. Now she can describe social determinants of health—and how to fight them—to any one of her six siblings, her neighbors, and her relatives. Between conversations, she’s realized that she’s less shy than she was three months ago. 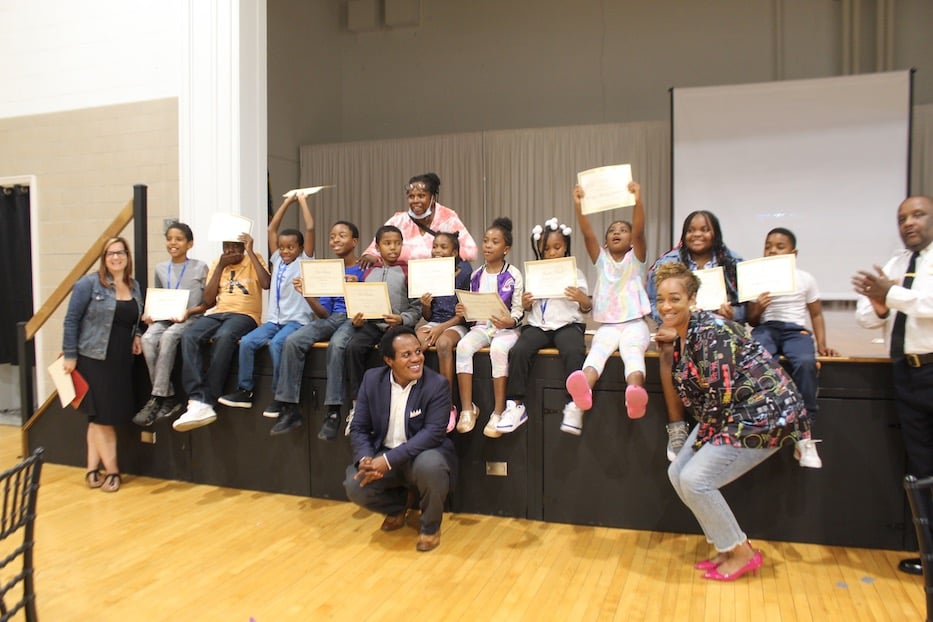 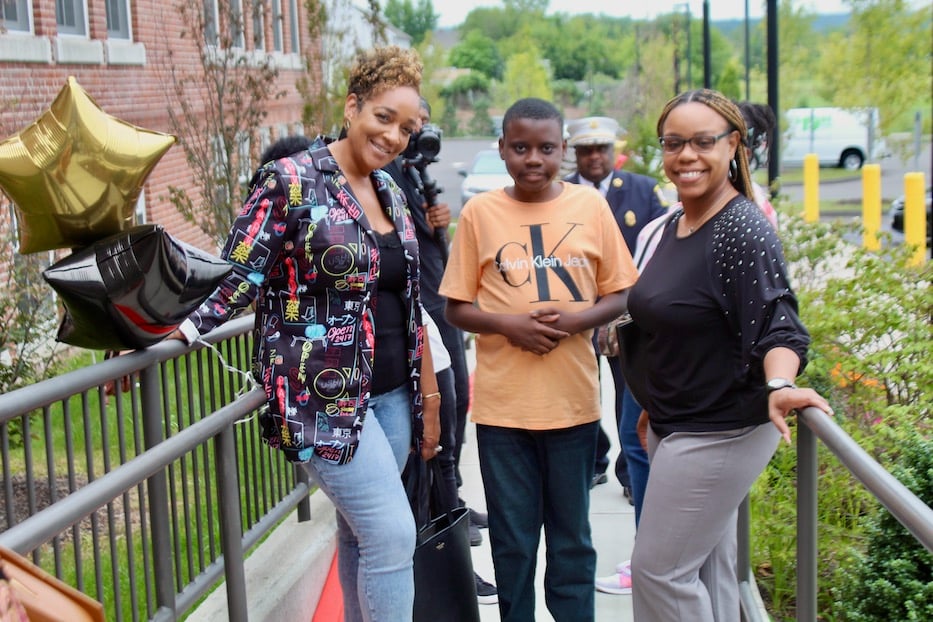 Students remained the focus of the afternoon. Lucy Gellman Photos.

Across the room, 7-year-old twins Tamya and Kameena Massey both agreed they will take what they’ve learned into the new school year with them.

“I think about this learning, it can help somebody,” said Kameena.

“It’s making them aware,” chimed in their mom, Tamia Massey. “They understand that they have rights.”

Their excitement for the program flowed right into Alston’s keynote, which he kept to a tidy six minutes as attendees waited patiently to cut into the cake. Normally, he told the audience, he spends September 11 in New York, where he responded to the fall of the Twin Towers with hundreds of regional firefighters 21 years ago. But when Harris asked him to appear before a community crowd, he couldn’t think of a place he’d rather be.

After urging young attendees to make sure their parents had fire alarms, he turned to the work he is doing to push back against SDoH in his own life, and his career in New Haven.

“I have never seen what our children have to face on a daily basis,” he said. He told attendees that he uses an acronym—I CARE—in his own life to think about how to fight SDoH and build up the community around him.

Together, that constellation of words includes individual respect, community, taking action (“nothing grows standing still!” he said to applause), respect, and engagement.

Going forward, Harris said she hopes to secure funding to both maintain and expand the program. Currently, she is planning a five-part docuseries with her students that will premiere Sept. 18 at a special SDoH-themed website.

“How can we get the word out?” she said. “How can we move the message forward? How can we teach people about social determinants of health? Because every underserved neighborhood, every neighborhood of need, needs to first know about it.”

To learn more about the work going into SDoH KIDS, visit the program's website. Watch the presentation of the Children's Bill of Rights in the video above.