On Juneteenth, A Newhallville Champion Receives Her Due 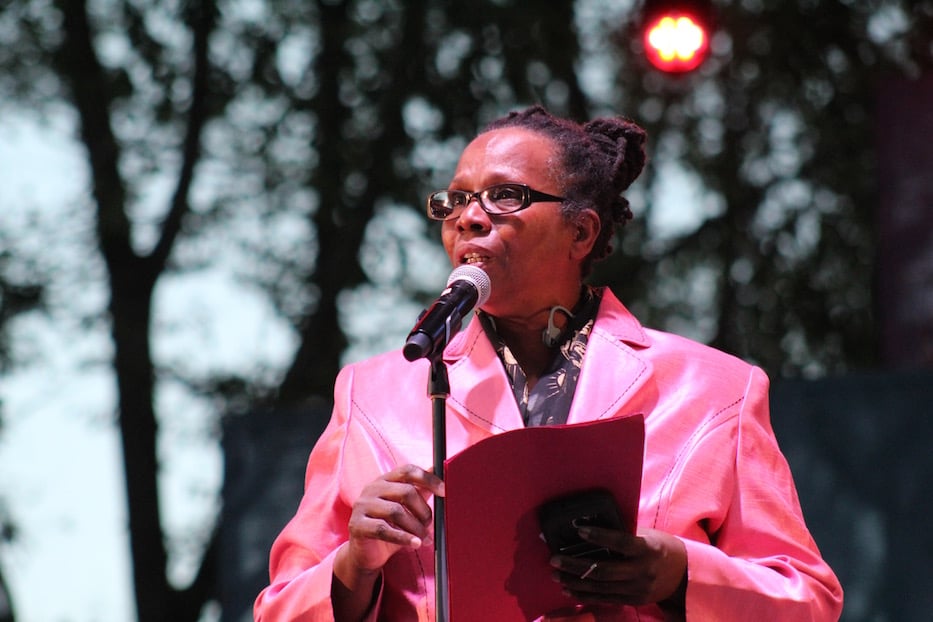 Kim Harris. "There are moments in your life that humbly take your breath away and touch the depths of your soul. For me this is one of those moments." Lucy Gellman Photos.

A lifelong champion of New Haven’s Newhallville neighborhood has been recognized yet again for her work building up the community around her. She’s taking the honor as a chance to keep growing her footprint with some of the neighborhood’s youngest residents.

That was the scene on the Green Sunday night, as Inspired Communities, Inc. Founder Kim Harris received the second annual Sharon M. Clemons Community Cultivator Award from the Clemons family and the International Festival of Arts & Ideas. The award honors the memory of the late Sharon Clemons, a beloved wife, mother, sister, and small business owner who died unexpectedly of Covid-19 in November 2020.

Harris is a second-generation owner of the Harris and Tucker School on Newhall and Goodrich Streets with her cousin, Karen Tucker. She is also the chair of the Newhallville Community Management Team, board member for the Community Engagement and Placemaking Network (CPEN), and an active member of Newhallville United.

"There are moments in your life that humbly take your breath away and touch the depths of your soul,” she said. “For me this is one of those moments." 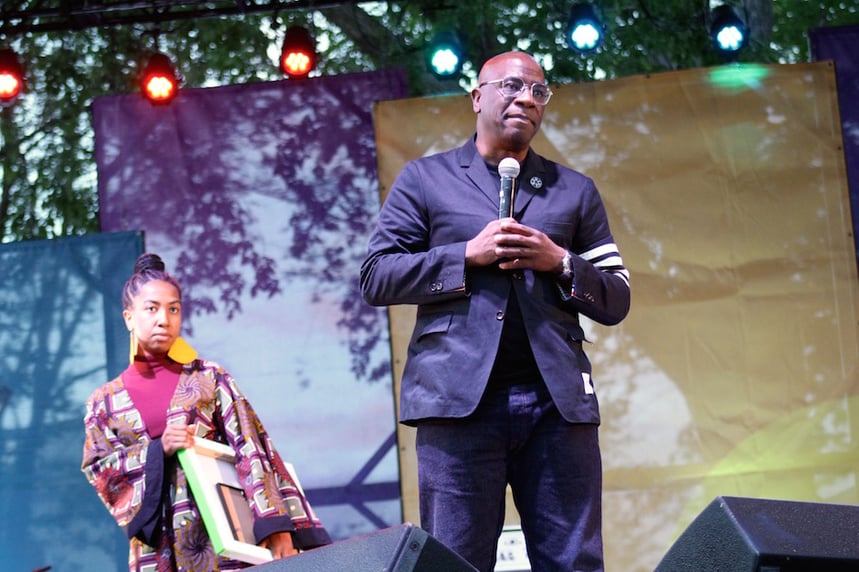 Arts & Ideas’ Community Programs Manager Shamain McAllister and members of the Clemons family created the award in 2021, just months after Sharon's death. Last year, they announced its launch at the festival’s first-ever hair show, also held on Juneteenth. The holiday, which recognizes the emancipation of enslaved Black people in Galveston, Tex. on June 19, 1865, has since become part of the award’s tradition.

Sunday, the recognition came with a painting from the artist Candyce "Marsh" John, who works under the moniker Marshun Art, and a brief ceremony on the Festival’s main stage on the New Haven Green.

“For me it was a very easy decision to name Kim the recipient of the community cultivator award, because she works tirelessly, no different than the way my wife worked, at really bringing people together, loving community,” said Erik Clemons, joined on stage by three of their four daughters and his sister-in-law, Joy Brown. “And creating opportunity for other people through her love and service.”

The daughter of the Newhallville matriarch Patricia Ann Harris, Harris has been spreading the gospel of community since she was able to walk. As a child growing up in Newhallville, she was surrounded by educators in both her mother and her aunt, Margret Tucker, who in 1968 founded Harris & Tucker School. They instilled in her deep faith: Harris prays every morning, and credits a higher power for giving her the strength and stamina to continue community building work for decades.

In the 1980s, she attended Southern Connecticut State University (SCSU), then headed to California to study video production. At the time, she said Sunday, she was holding “bits and pieces of broken plans and ideas,” and headed to California hoping that travel would unlock something within her. It did. 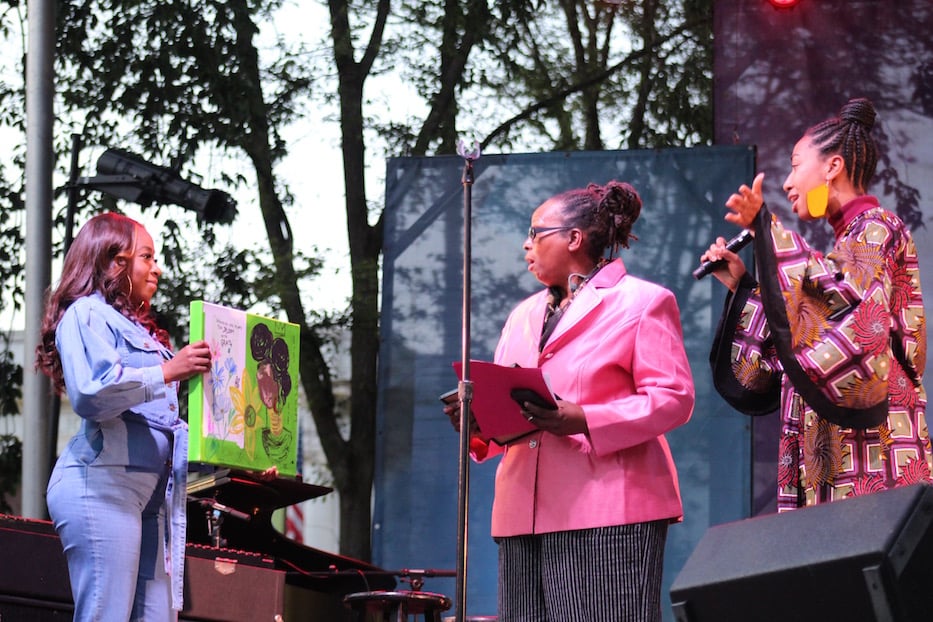 “The journey changed the course of my life,” she said. “I learned the art of studying people, and the importance of power to the people. I saw how positive examples quietly release and distribute inspiration, hope, opportunity, and access.”

Perhaps because she is so rooted in New Haven, the West Coast could only keep her for so long. In a “New Havener of the Year” interview in 2018 with the New Haven Independent, she recalled running a video production outfit called Students On A Mission for 14 years. Her first community was never far from her heart: it was those years in which she dreamed up programs like Kids T.V. that she would ultimately bring back to Newhallville. She returned to New Haven in 2001. When her mother passed away four years later, she and her cousin, Karen Tucker, took over the preschool. Years later, she received accreditation for the school, for which her mother had fought a decades-long battle.

It was in those years that Harris also met Erik and Sharon Clemons, who she recognized as “a super power couple” cut from the same cloth of faith, family, and community that was both tight-knit and expansive. For two decades, she said Sunday, it was her honor to share in their journey. She thanked the Clemons family for providing her with examples of what it meant to grow and nurture a neighborhood.

“I watched them as they pursued and cultivated a life of fullness,” she said Sunday, taking the stage in a pearlescent pink blazer that glowed beneath the lights. “But the examples that they radiated weren’t just for their family. They were for anybody that would receive them, and I thank you for that.” 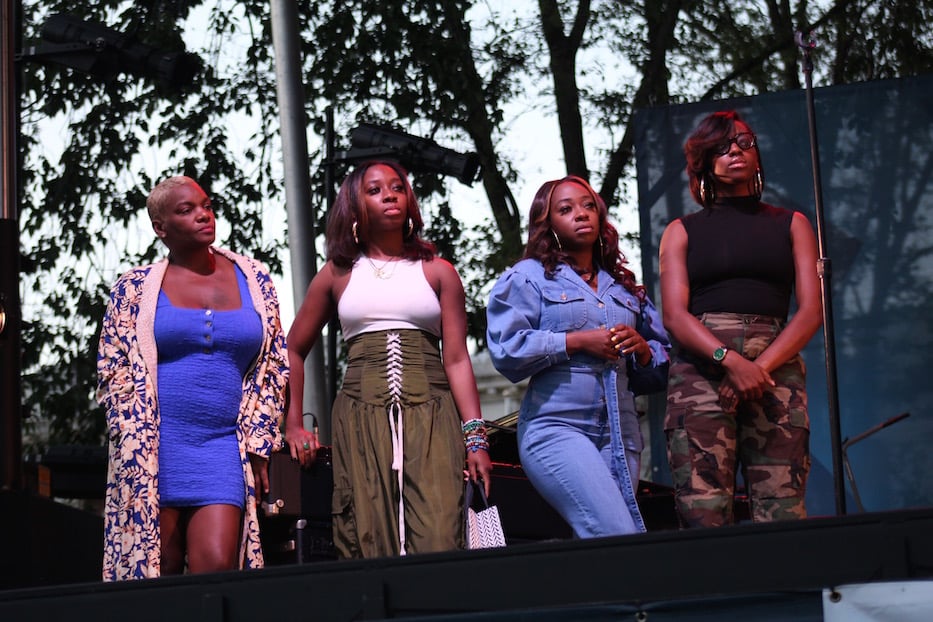 From left to right: Joy Brown, and Erik and Sharon's daughters Nia, Nyle Clemons, and Kai Clemons. Their eldest, Kiara Osborn, was home with her own two daughters.

In that time, Clemons also watched her help Newhallville and New Haven thrive. Even as she ran Harris & Tucker with her cousin—itself a full-time job—Harris grew her impact in the neighborhood she had always called home. She began attending meetings of the Newhallville Community Management Team, of which she is now the chair. In 2018, she spearheaded the One City Initiative, a city-wide effort to create fun, affordable, and safe summer programming for New Haven kids. It ultimately brought in over 10,000 people, and became a blueprint for many of the city’s summer programs that still exist this year.

Harris, in many ways, was just getting started. In late 2018, she launched Inspired Communities, Inc., a grassroots effort aimed at bringing Newhallville residents together one program at a time. When the Covid-19 pandemic hit the city in March 2020, she kept Harris & Tucker running and helped organize food and diaper drives in the neighborhood. Last year, she pounded the pavement for Ward 20 Aldermanic Candidate Devin Avshalom-Smith, whose win last November ushered in new leadership for the neighborhood.

This summer, she is continuing to grow that work with “Camp One City,” a summer program that works with the Community Alliance for Research and Engagement (CARE) to address social determinants of health one kid at a time. She is also working to build out a reading nook and computer lab at 324 Shelton Ave. as part of her work with Inspired Communities.

Along the way, she said Sunday, she has been lucky to have examples in Newhallville from which she draws inspiration. They include the Connecticut Center for Arts & Technology (ConnCAT) and its subsidiary ConnCORP, Newhallville/Hamden Stronger Together, CPEN’s transformation of the Newhallville Learning Corridor and UrbanScapes Native Plant Nursery, and the members of the Newhallville Community Management Team, whose love for their neighborhood brings them back each month.

In the past six months, she and those members have been part of an effort to stop the APT Foundation from building a methadone clinic at 794 Dixwell Ave., in the now-vacant shell of a former elementary school. It’s just one way she has seen that people—including those who have been historically left at the margins—are stronger when they work together towards a common goal.

“Community cultivation is a process that takes time, hard work, lots of people, and love, “ Harris said Sunday, starting to cry as she approached the end of her speech. “To the Sharon Clemons family, I thank you for the process that paved the way, and for bringing validity, value and honor to the work that my team and my community do every single day.”

To watch the ceremony from Sunday night, click on the video above.