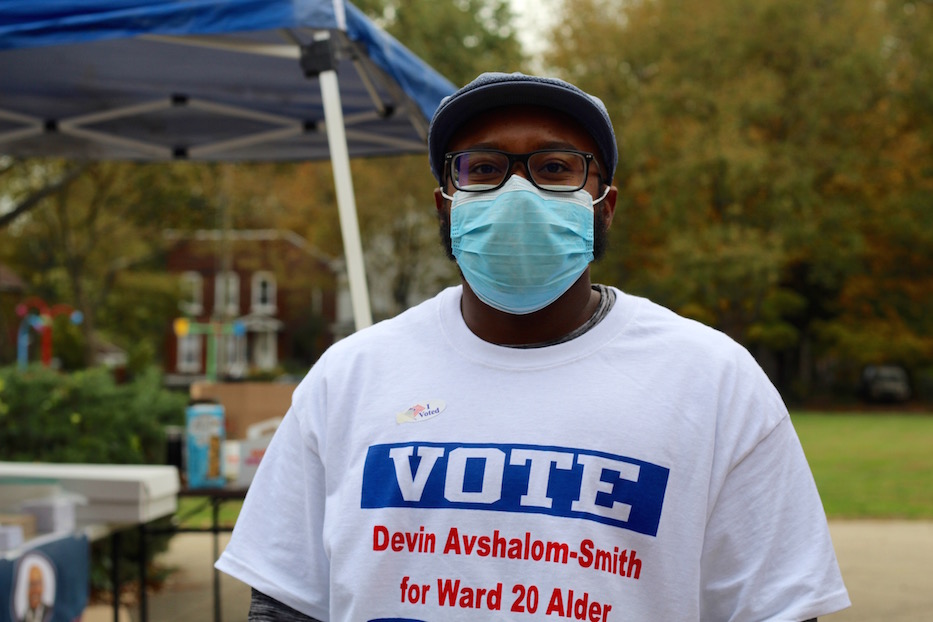 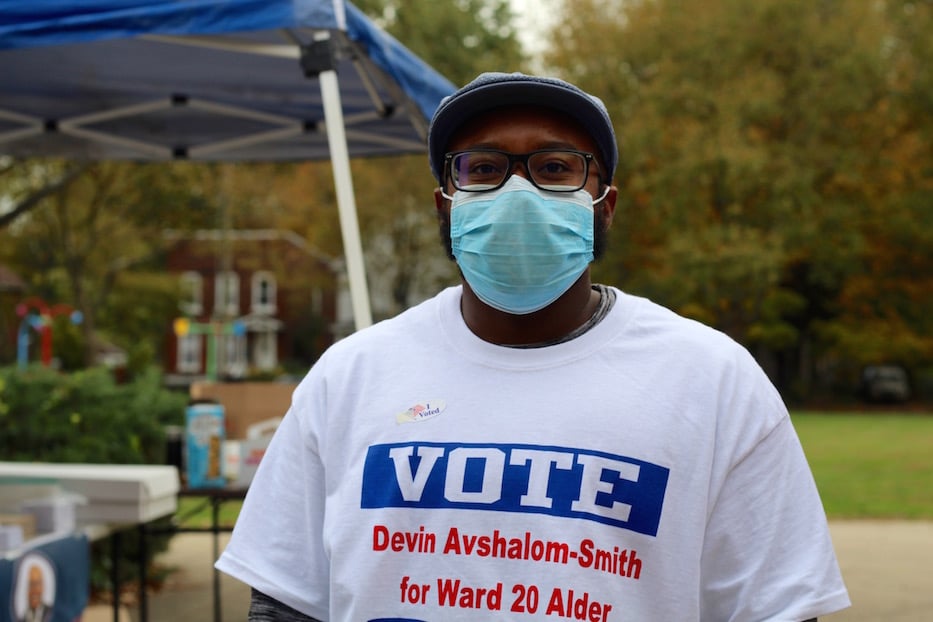 Poetry and songwriting helped Devin Avshalom-Smith keep himself grounded as a community organizer. Now, he plans to bring his vision for democratizing the arts not just to City Hall, but into the neighborhood he calls home.

Avshalom-Smith, 32, was elected Newhallville alder on Tuesday night, beating out community gardener Addie Kimbrough to represent Ward 20. After winning the primary election in a grassroots, pavement-pounding, door-knocking campaign in September, Avshalom-Smith won a total of 344 votes Tuesday. Kimbrough took 41. Shirley Lawrence, who was originally endorsed by the Democratic Town Committee, withdrew her name after a ward primary earlier this year.

He will replace longtime Newhallville Alder Delphine Clyburn, who resigned in July.

“The arts have really saved my life,” he said Tuesday afternoon, in an interview outside of Lincoln-Bassett Community School as voters trickled in and out. “However people express themselves, whether they’re musicians or visual artists or spoken word [artists], I want to incorporate that into what it's gonna take to bring the community together.”

Raised between Hartford and New Haven (read more about his political evolution here) Avshalom-Smith’s introduction to the arts began with poetry and spoken word when he was just a kid. Early on, he said, he discovered that putting his thoughts down on paper gave him a sense of peace, as if the page could absorb his frustration or sadness and spin it into something bright and new. He never stopped writing, even as he became involved in political advocacy.

Even then, Newhallville was never far from his mind. He spent weekends visiting his mother and grandparents in the same Starr Street home where he now lives. He got to know the neighborhood intimately on his summer vacations. During those years, it was watching his mother’s constant sacrifice that later convinced him to run for public office in New Haven. “I do it all for her,” he said. 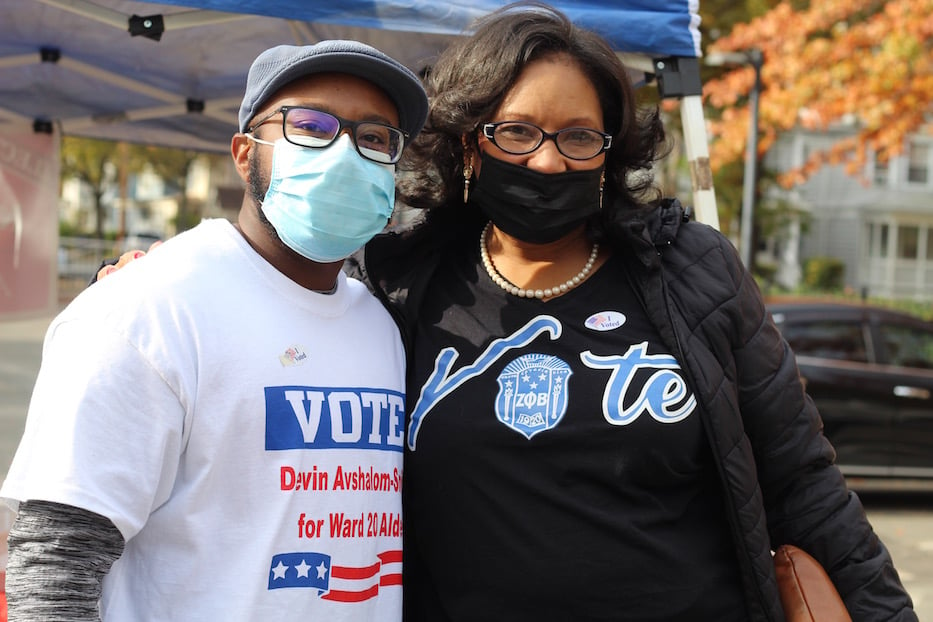 Avshalom-Smith with Lisa Kellman, who produces Black Nativity at Bethel AME each year.

As he sailed through middle and high school, Avshalom-Smith added trumpet lessons to his repertoire, a skill he grew as a member of the band at The George Washington University in 2007. After he graduated, life felt too busy to continue playing the instrument, he said—it now sits quietly in his closet at home—but he held tight to poetry and began to hone his songwriting skills. After long, stressful days, he still often returns to his notepad and begins to scribble out lyrics as a way of making sense of things.

“It's cathartic for me,” he said. “It helps keep me centered. It's my therapy. I also just really like putting out messages that I believe will resonate with a lot of different people, no matter where they are in their journey in life.”

He often writes songs “about community unity,” he said. His recent song "One Day at a Time," for instance, is dedicated to a friend who died of alcoholism last year. In the track, Avshalom-Smith’s voice coasts over the bridge, smooth before it catches on something for a moment, dips, and then coasts upward.

“Long as the sun shines/You're not alone with your troubles,” he sings. His voice is full of light. “Keep this in your mind/There's always hope for tomorrow.”

After working in community organizing and education for almost a decade in Washington, Avshalom-Smith brought that lens on the arts to New Haven. As a fierce neighborhood advocate and a legislative aide for State Rep. Robyn Porter, he has built a life that often falls at the crosshairs of legislative policy and advocacy. He’s always made arts and culture a part of his strategy, harnessing their power for both joy and social justice.

In the early stages of the Covid-19 pandemic last year, he founded the Newhallville Community Action Network (NCAN), using the Facebook group to share information about food distribution efforts, Covid-safe community events, and management team meetings that had braved the online pivot. He turned to Facebook’s most basic function—the comments section—to figure out what neighbors needed, when, and how to get it to them.

He never failed to fold arts coverage into the mix, from live videos of New Haven Alumnae Chapter of Delta Sigma Theta Sorority, Inc. strolling to the polls a year ago to musical puppet shows on the Newhallville Learning Corridor last summer. 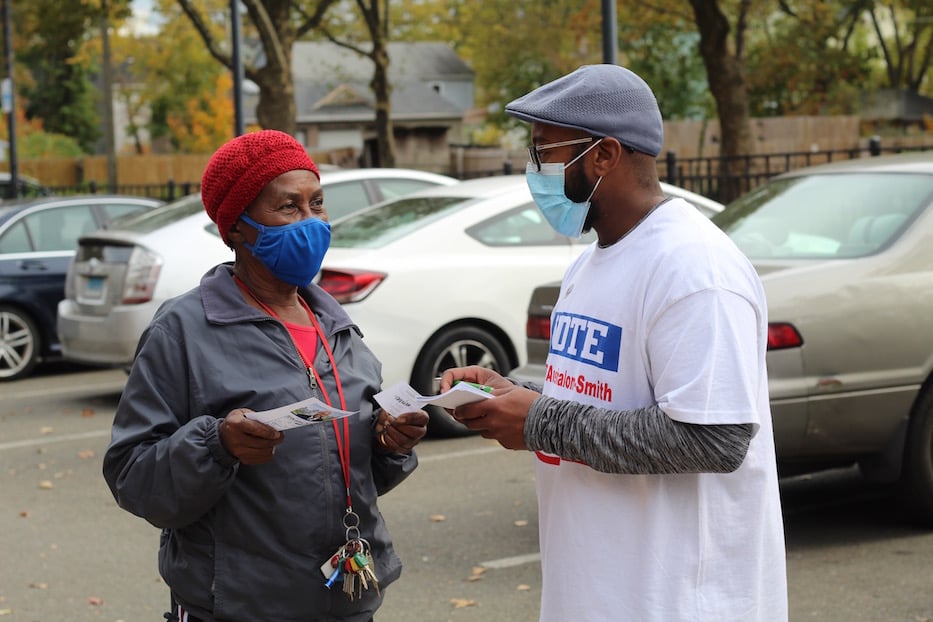 Last July—in a city that laid bare the reality of two pandemics—he worked with the community group Newhallville United to organize a day-long festival that brought out drummers, dancers, spoken word artists and student filmmakers alongside speakers on the sprawling lawn outside Lincoln-Bassett. He helped organize back-to-school drives and collect backpacks for kids across the neighborhood. He has been a constant presence at not just political events, but neighborhood arts festivals that have after a long, quiet pandemic hiatus.

“Arts are healing,” he said. “They require and inspire creativity from any individual who is engaging in or even witnessing the arts. It's no secret that we live in a community that's plagued by violence and poverty. So any type of opportunity where artistic expression is displayed or encouraged brings a level of light, healing and love that is desperately needed.”

As the neighborhood’s next alder, he said that his first priority is to listen—including to the musicians, writers, visual artists and dancers who are living vibrant lives across Newhallville's tree-lined city blocks. In his professional work, he’s seen how the arts can demystify complicated, sometimes jargony policy, and can already envision working with local artists to bring neighborhood issues into the spotlight.

Avshalom-Smith has been able to learn already on the job. Many of supporters are grassroots cultural champions, including The Perfect Blend’s Jeanette Sykes, Harris-Tucker School Director Kim Harris, and CPEN's Doreen Abubakar. Like them, he envisions the arts as something every resident should have safe and affordable access to, particularly through after-school programming and wider youth development opportunities.

“I’ve been with him since day one,” Sykes said Tuesday, standing with Avshalom-Smith outside the polls. “Our message has not changed for Newhallville. There’s so many things that we can be doing all at once to support this neighborhood, to be more inclusive, to get everybody involved.”

He also plans to push for more accessible youth arts programming in and outside of the city’s schools—a focus that comes as the city receives millions in federal relief through the American Rescue Plan. As an adult who had access to the trumpet decades ago, he’s seen firsthand how music can open up a student’s entire world.

Tuesday afternoon, he outlined that vision while fielding questions about long-dead streetlights, crumbling roads, and a rise in citywide gun violence while greeting people as they trickled into the polling site. It seemed that he knew every voter’s name and street, learned over hours of door knocking and front porch conversations.

"If a kid here wants to play the upright bass, we should make it a priority to get funding for these kids,” he said. “Because time that our kids are spending doing that and developing skills is less time for them to be idle and possibly on the street."

“This community deserves strong leadership, and I feel like I have to rise to this moment,” he said. “I believe that I have the skills and the qualities necessary to bring us together more as far as unity goes, but also to push us forward as far as policy-driven community agenda items go.”