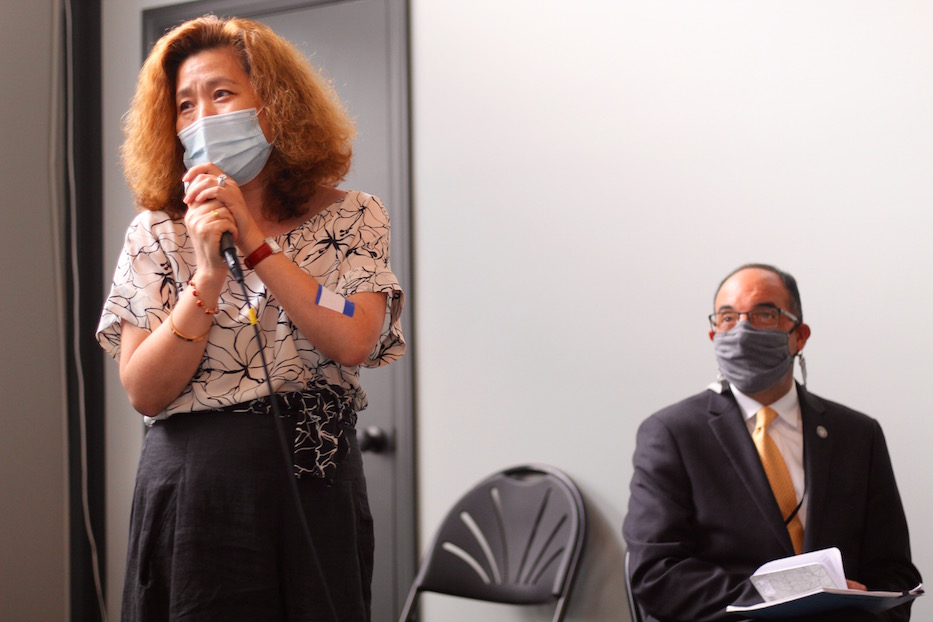 Rachel Glover, who said that the past year has been "a nightmare for working parents." Lucy Gellman Photos.

Art teacher Rachel Glover knows that all-day Pre-K can be a lifeline for parents. That’s because she had it for her child before the pandemic.

Then when Covid hit, she, and thousands of other New Haven parents, lost the program for over a year. Now she’s hoping to see its return to the city—and pushing for an infusion of federal funding to help make that a reality.

Tuesday evening, Glover was one of two dozen participants at the final public session of Civic Space, a five-part series intended to collect input on how the city should spend almost $100 million from the American Rescue Plan. After holding sessions at James Hillhouse High School and branches of the New Haven Free Public Library, the series concluded at the Shubert Theatre on College Street downtown.

The initiative is collaboration among New Haven’s Economic Development Administration, New York-based consulting firm Hester Street, New Haven-based firm DC Design and Project Manager Corinna Santos, as well as two New Haven Promise interns who have done much of the data entry. In addition to the five public sessions, the Civic Space team has held focus groups with “stakeholders in the community” and members of the Board of Alders “who are representing neighborhoods of need,” Hester Street’s Isella Ramirez said.

“We have gotten an incredible amount of input, ideas, suggestions, and also stories from people who’ve shared their own lived experience to help guide the thinking on how we take advantage of this incredible opportunity,” Mayor Justin Elicker said on Tuesday. “We have around $90, $100 million that we can invest in our city, and that to me is an opportunity to change the dynamic.” 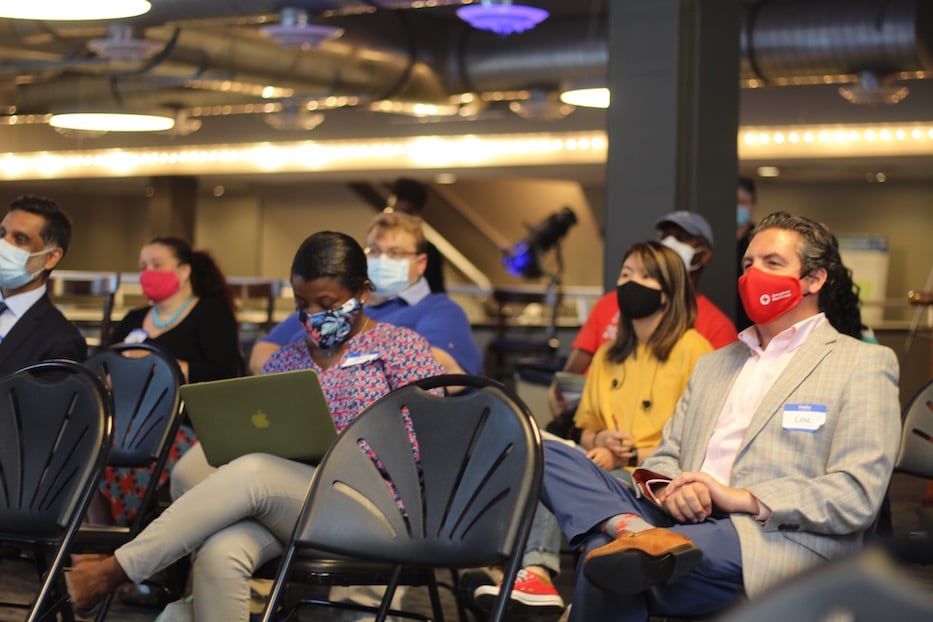 Between now and October, city officials plan to draft and submit a proposal for the funds to the full Board of Alders. Elicker said that part of the process is figuring out how to make the distribution of funds sustainable, so that the dollars spent in the next four years continue to give back for much longer.

This year, it is part of a new stream of state and federal funding coming to the city, from doubled PILOT dollars to a higher Earned Income Tax Credit. Read about previous sessions here, here, and here.

As they arrived, masked attendees gathered on the Shubert’s second-floor lobby, studying vision boards and sticky notes on homeownership, economic development and wealth redistribution where patrons typically sip martinis and debate the merits of Les Miserables or The Book Of Mormon.

In a hot pink mask, Glover took a seat a few rows back, listening quietly before chiming in.

The Results Are In 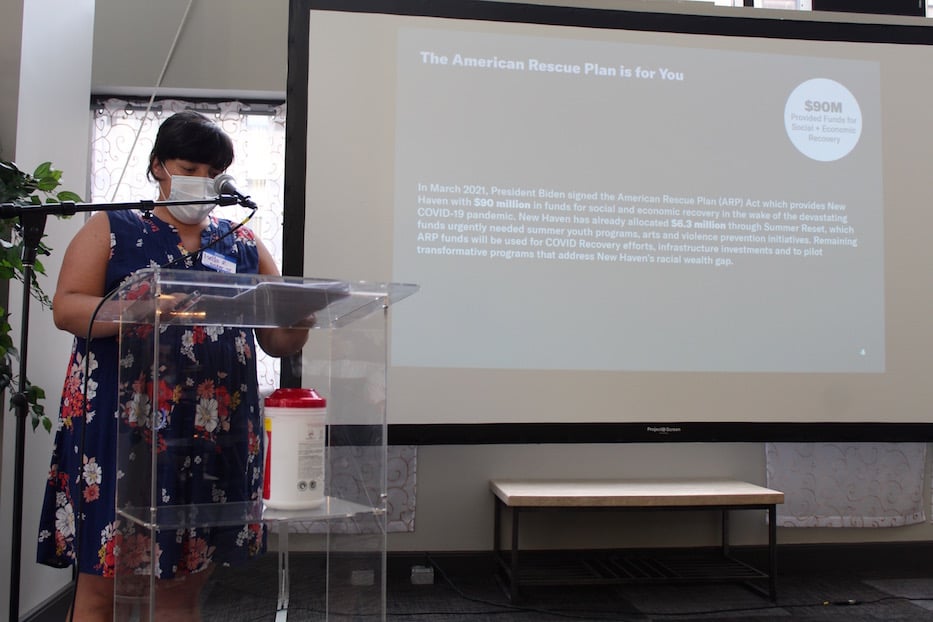 Isella Ramirez.who is the director of community engagement and capacity building for Hester Street.

Over the first four sessions, Hester Street’s Ramirez and Kim Ochilo said the team identified income inequality, intergenerational wealth, homeownership, and access to institutional capital—all factors in the racial wealth gap—as the greatest areas of need. City residents have also pointed to climate resiliency, food security, public safety and youth programming as areas of need in both public input sessions and online. Santos said that she thinks of each of those as “buckets,” into which different allocations of American Rescue Plan funding will go.

When they were listening to feedback, Ramirez and Ochilo said that the team heard suggestions that ranged from greater access to multilingual programming to a better way to connect New Haven residents with municipal government, citywide nonprofits and social service organizations. New Haveners identified public transportation, workforce development, small business support, financial literacy and student debt relief as areas they hope to see more investment in.

In addition, Ochilo said that Hester Street heard a need for stronger incentives for homeownership and protections against absentee and predatory landlords. Currently, mega-landlord Mandy Management and its affiliate corporations are on a citywide buying spree that has scooped up entire blocks in months. During input sessions, city residents have discussed fear of displacement, substandard living conditions, the state’s eviction crisis and lack of access to homeownership as areas in which they are concerned. 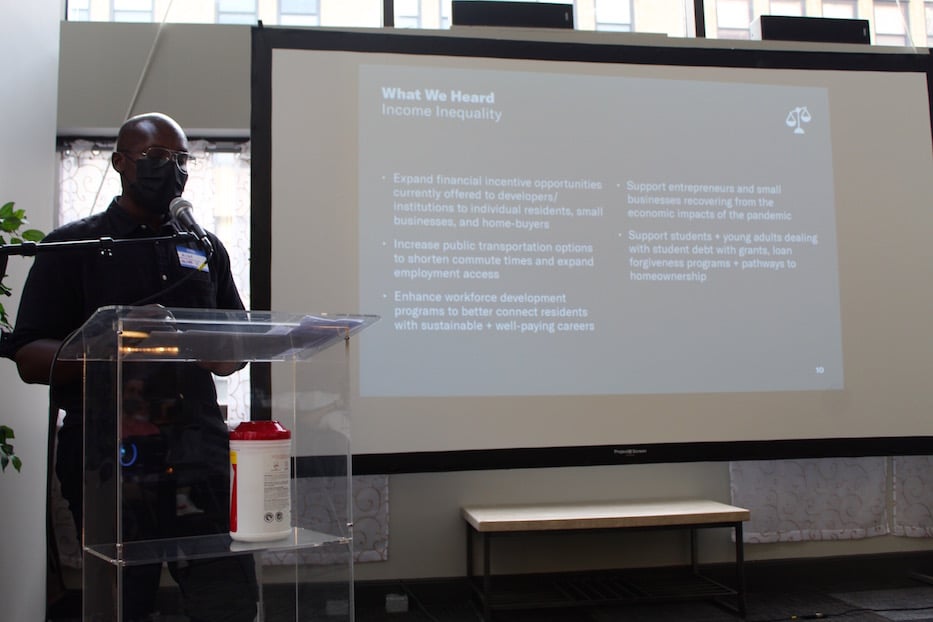 In its work, Hester Street looked into existing programs that seek to provide direct and sustained financial assistance and greater incentives for homeownership. Ochilo and Ramirez pointed to HouseHartford Homebuyer Assistance Program, which gives Hartford-based homebuyers up to $40,000 in financial assistance when buying a home, and Detroit’s allocation of $100 million to combat intergenerational poverty, as templates the city is currently looking to as it drafts its proposal.

“We hope that we capture the spirit of what we heard,” Ochilo said.

He added that the focus on the racial wealth gap is part of how “I just think about the whole person.” Currently, Black and Latinx residents in the city trail white residents in income, homeownership, and access to institutional capital, from nurses and elementary school teachers to small business owners. 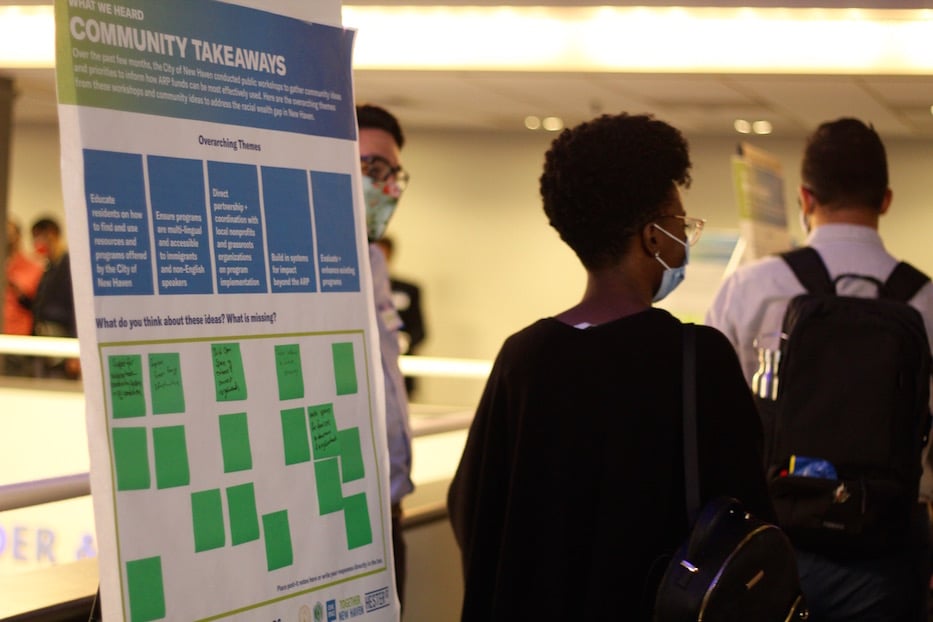 Even as the public sessions come to an end, Santos said, Civic Space is still open for input. Tuesday, attendees spoke during a brief question-and-answer session, making the case for everything from city pensions to community gardens.

Glover, an art teacher and 16-year veteran of the Bridgeport Public Schools, moved to New Haven 20 years ago. Her three kids are 10, 4, and 14 months, with another little sibling joining them in “T minus five months.” Last year, she got an email telling her that all-day pre-kindergarten at Davis Street  School was no longer all day. Instead of running from 7:30 a.m. to 5:30 pm., its hours would be cut back to 9 a.m. to 3 p.m.

For Glover, who returned to in-person instruction in Bridgeport last September, it turned her already-upside-down-world further on its head. She and her husband both work full time, and need to remain a two-income household to afford living in New Haven, she said.

The existence of all-day Pre-K and New Haven’s educational programming was one of the things that kept them in the city when they started planning a family. The program had been a lifeline for her 4 year old, and ensured that she could get to and from work on time.

With their 14-month-old in a Montessori program and their 10-year-old in remote school, the couple realized that they were living in “a nightmare for working parents.” Her husband took on the bulk of additional daytime childcare responsibilities, and a pay cut that came with it. When their children had to quarantine, she took sick time. They, and thousands of other New Haven parents, “were in crisis mode,” she said.

Since last March, almost two million women have left the American workforce, many citing the impossible expectations of parenting in a pandemic and country where infrastructure for working women is extremely sparse. She can’t afford to be one of them—and doesn’t want to.

“The city is a great place to live,” she said in an interview after the session. “I would be very sad if I had to up and leave.”

She asked city officials if some of the American Rescue Plan funds might go toward restoring those lost hours. Economic Development Administrator Michael Piscitelli said that funding for Pre-K and childcare resources was one of the items “on the list.” 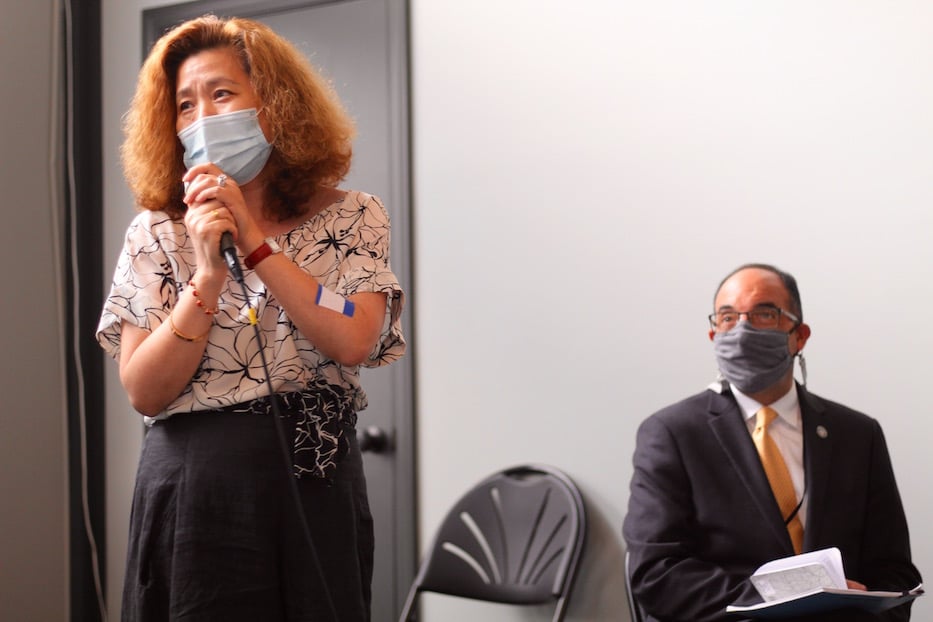 Hu Ping, who owns the New Haven restaurants Taste of China, Chuan Du Hotpot, and Steamed, raised her hand from the third row of chairs. As an immigrant small business owner, she said, the past 16 months have been the hardest she’s faced since opening Taste of China at 954 Chapel St. in 2000.

In 2019, she opened Chuan Du at 27 Temple St. The space, which has been a rotating door for restaurants for years, needed serious renovations, she said. So she “put a lot of money into it,” and hoped that the sprucing up would pay off. Instead, the pandemic hit. The restaurant closed permanently last year. Taste of China and Steamed have remained open, although Steamed went on a temporary hiatus last year.

“Thank you for bringing the voice of the restaurant industry,” said Piscitelli. He said that there may be new opportunities from the U.S. Small Business Administration (SBA) that Hu Ping and other New Haven restaurant owners can tap into.

In addition, Hester Street has identified support for businesses owned by immigrants and members of the global majority as one of the ways to close the racial wealth gap.

An Eye On The Arts 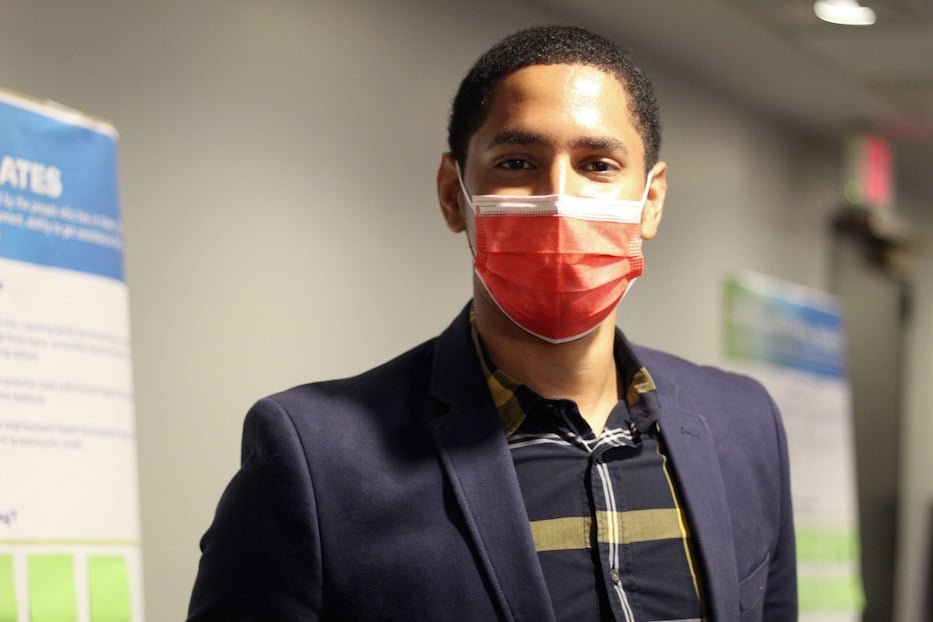 Anthony McDonald: “We want to know where the help is for everybody else, and what we can provide.”

Anthony McDonald, who became the Shubert’s executive director in March, said he is hopeful that city officials will include the arts in funding proposals going forward, as they have already. In the $26.3 million chunk of funding on which the city’s full Board of Alders has already voted, $1 million goes toward arts and culture. Currently, that money is being distributed through grant programs at the city level.

Director of Cultural Affairs Adriane Jefferson said that she has been listening to artists and arts administrators to inform the grantmaking process. Funding areas currently include teaching artists, public art projects, and outdoor festivals and events. Earlier this year, McDonald talked to the Civic Space team about artists’ need for free and affordable space. It gave birth to a new grant that subsidizes space for artists at institutions that can provide it.

“The Shubert is fortunate that we get help from the city and the state,” McDonald said, adding that the theater was recently a recipient of Shuttered Venues Operation Grant (SVOG) funding from the federal government as well. “We want to know where the help is for everybody else, and what we can provide.”

Jefferson added she would like to see support for the city’s ongoing cultural equity work, including a Cultural Equity Plan that is set to go before the New Haven Board of Alders this fall. She sees that work, which supports New Haven artists, arts administrators, and smaller, grassroots arts organizations through an anti-racist lens, as vital to closing the racial wealth gap.

“It rolls right into arts and culture through the lens of wealth building,” she said.