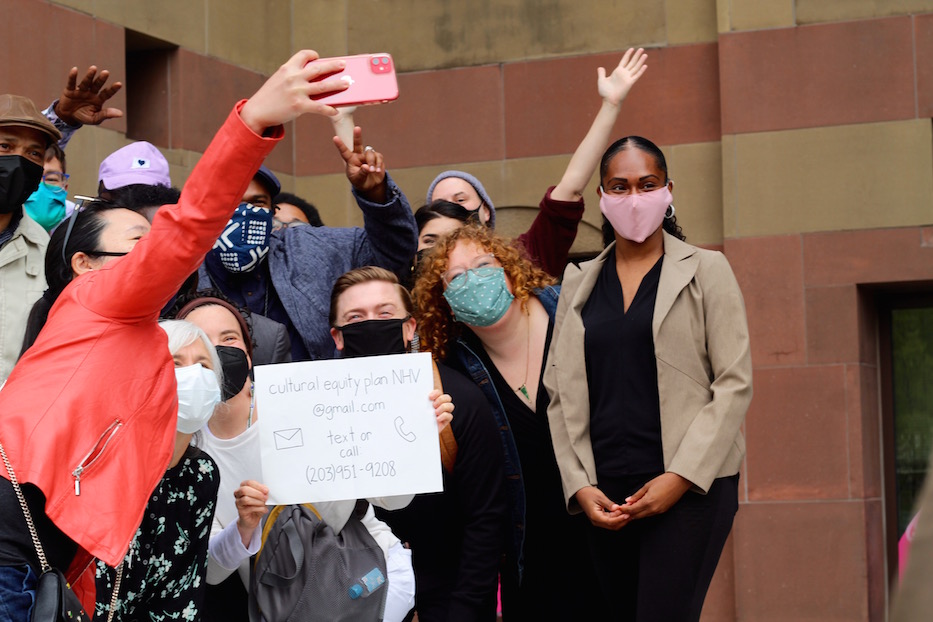 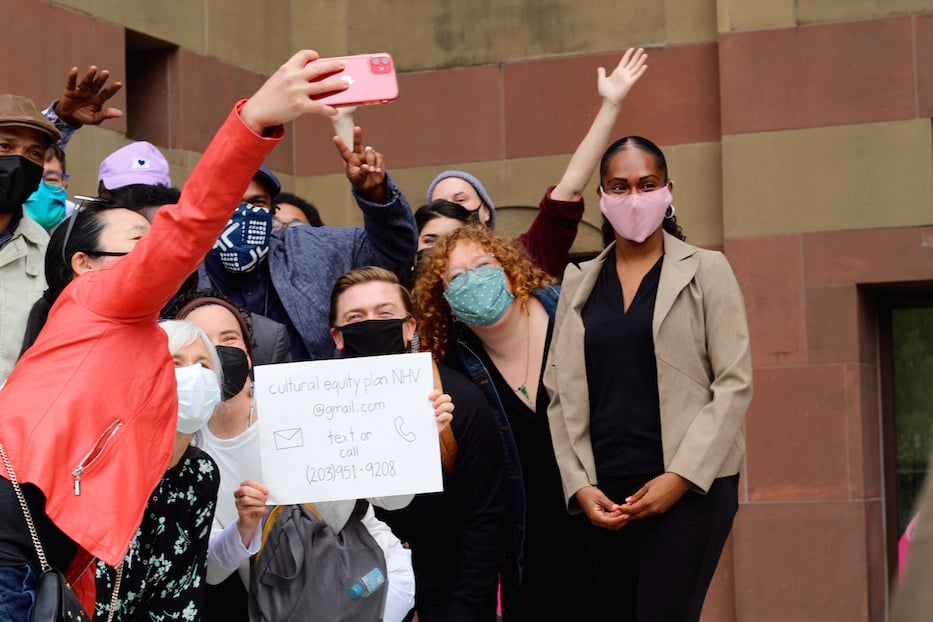 The drums rang out across Church Street, setting a heartbeat that rippled over City Hall. Gusts of wind danced around Ed Hamilton’s Amistad Memorial. In the background, a Black boy named Joy surfed on a fizzy pink soda stream and exploded into a huge smile. As the drums quieted, a small crowd cheered on a more equitable vision of arts and culture in New Haven.

Tuesday afternoon, city officials and members of New Haven’s Cultural Equity Co-Creation Team announced a new, public phase of the city’s cultural equity planning process. For the past several months, the Department of Arts, Culture & Tourism has been working quietly with consultants from Civic Impact Lab and Hester Street and a team of city residents on a forthcoming cultural equity plan. Now they are calling on New Haven residents for their input.

Two virtual meetings are scheduled for May 18 and May 22. The team will also soon release a survey that will be available online and at branches of the New Haven Free Public Library (NHFPL). Both will be available through the Department of Arts, Culture & Tourism website. 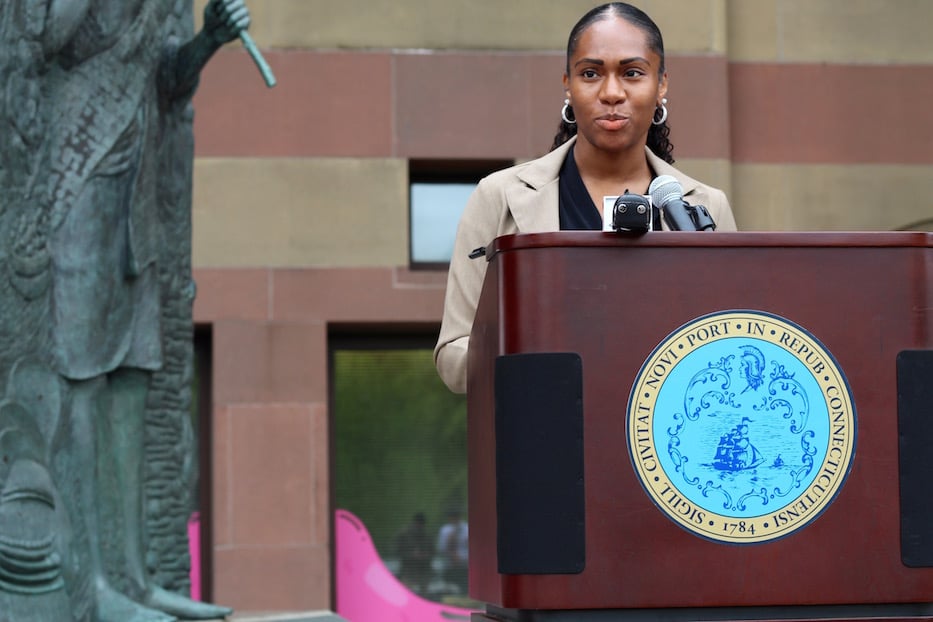 Jefferson: "What we're talking about here is inclusion."

“What we’re talking about here is inclusion,” said Adriane Jefferson, city director of cultural affairs. “And what we’re talking about is centering people and redistributing power. And putting the power back to the people who it belongs to. A lot of times when we’re looking at governance, it feels like there’s this top-down approach, and the idea that we wanted in this department—and also what the people have been asking for—is to have a stake in governing.”

While Jefferson expects the plan to be a “living document”—meaning that it can and will change with time—it will lead with a focus on neighborhoods that have been underfunded for decades. Since February of this year, the New Haven-based firm Civic Impact Lab and New York-based nonprofit Hester Street have been meeting on a biweekly basis to create the plan’s framework, which will be drafted and submitted to the city’s Board of Alders only after public input. It marks a shift from a previous focus on large events downtown, which were a trademark of Andy Wolf’s tenure until his death in August 2019. 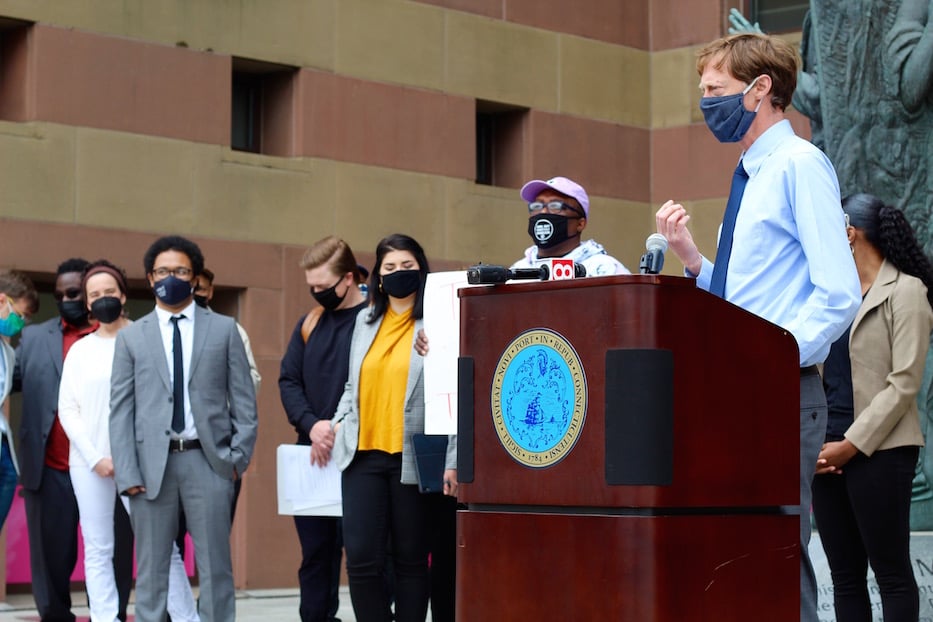 Mayor Justin Elicker with members of the co-creation team. "Arts and culture are about that humanity," he said during the event. "It allows us to express ourselves, it allows us to engage with someone and make ourselves vulnerable, to share some emotion that we may often not find the words to share."

The plan has been in the works for over a year, dating back to when Jefferson stepped into her role in February 2020. When she started, she saw a call for cultural equity that was coming from both Mayor Justin Elicker’s transition report and from neighborhood advocates who were often left out of arts funding. She said that she has long been interested in working with Hester Street, which helped design New York City’s cultural plan.

When the pandemic hit, she pivoted to rolling out programs at the nexus of culture and economic development. In partnership with the Arts Council of Greater New Haven, the city launched the Creative Sector Relief Fund in March 2020, and then grew it to serve the region. Last summer, the department rolled out an Arts for Anti-Racism Pledge, challenging local arts organizations to move beyond statements promising justice into demonstrated action. In February, she helmed New Haven’s “Unapologetically Radical” conference.

Tuesday, she was quick to say that she never stopped working on the plan—it just became an act of reverse engineering.

In November, the city signed contracts with Civic Impact Lab and Hester Street. From Civic Impact Lab, New Haveners Johnny Shively, Elizabeth Nearing and Eric Rey gathered a team of 14 city residents to give input. In biweekly meetings, team members have done cultural asset mapping, survey development, and exploration into the people and places that have historically been left out of cultural planning and programming choices. Hester Street, meanwhile, has been working to formulate a community survey and multi-point plan that integrates feedback from the team. 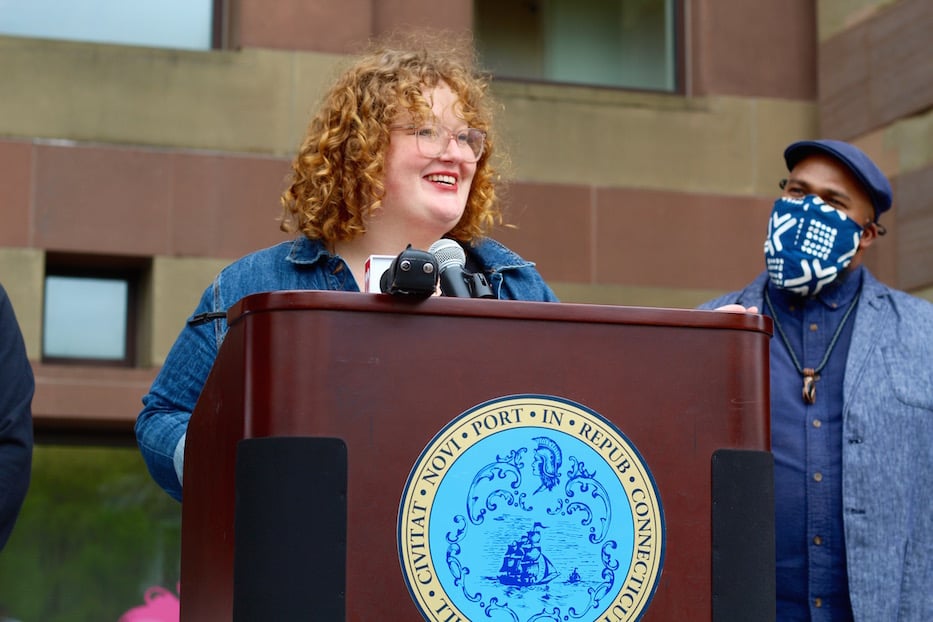 Elizabeth Nearing said that the team was guided by core values that include "dismantling systemic racism, centering knowledge equity, lived experience, academic experience—there's so many different kinds of knowledge in our city, and we need all of them to make this plan."

“We want to create space to imagine,” Nearing said Tuesday after giving a land acknowledgment. “To imagine what hasn’t existed before, to weave together things that already do exist. We believe that awakening joy can catalyze transformative change.”

Tuesday, several team members spoke about the plan as a new way to redistribute economic power through arts and culture. Curtis, who grew up in New Haven and now works as a field organizer for the ACLU, said that he has until now been excluded from discussions around city funding and resource allocation, despite decades of lived experience. He said that having access to the team—and to the city—means that he can pave a path for more people with similar backstories. During the press conference, he held a handmade sign that read “Together We Thrive” in big red letters above his head.

Dunn, who lived on Sherman Avenue when he first arrived in New Haven, recalled attending the city’s gospel festival in Dixwell and realizing that New Haven might be his forever home. After a stint at the International Festival of Arts & Ideas, he became the director of the New Haven Pride Center in August 2017. He said that for him, cultural equity means making sure that all artists—not just white, straight, cisgender and wealthy ones—have a seat at the cultural table. He praised fellow members of the co-creation team for helping him get through “the hardest 14 months of my life” as he leads the center through the Covid-19 pandemic.

Lin, who also spoke at a rally against anti-Asian and AAPI hate crimes last month, encouraged her friends, colleagues, and fellow members of the Asian-American and Pacific Islander community to get involved and lend their voices to calls for public input. Chávez, a self-described coffee addict and “a queer Latina from Texas, with a blood that carries both the lineage of the colonizer and the colonized,” said that she sees culture as rich and multilayered, composed of the people and the history that make a place what it is.

“Culture is all the pieces of us, from who we love to the food we make and the history of the people that we come from,”Chávez said. “And cultural equity in New Haven means creating a city where those intersections are understood by all of us, liberated to exist safely, and abundantly resourced to flourish.” 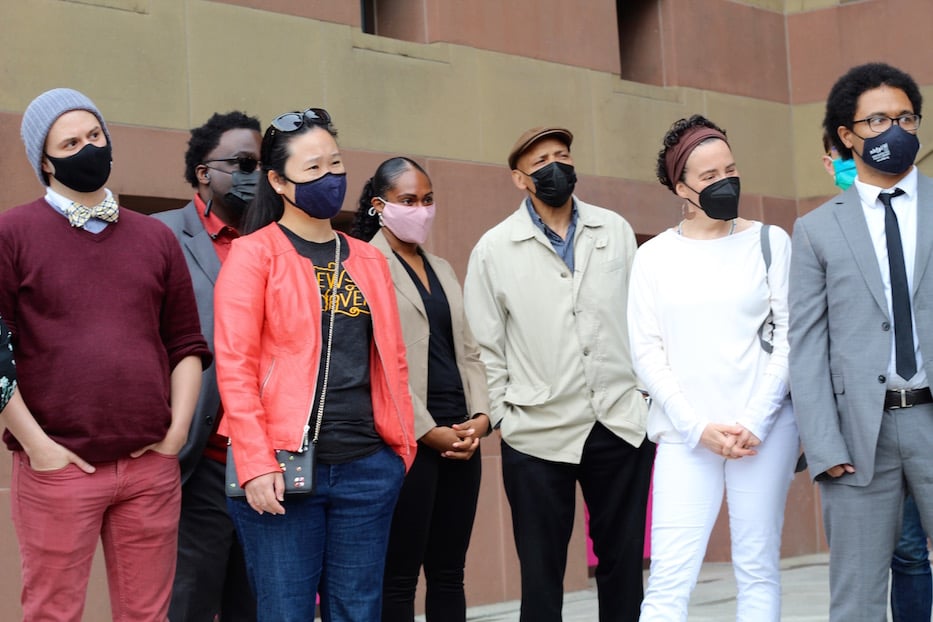 Chavez-Brumell, who grew up in New Haven, pointed to cultural equity as a kind of resource bridge. As a kid, he got to know the city’s Hill neighborhood while his parents worked for the Hill Health Center and Lulac Head Start. As a librarian and former branch manager at Wilson Library, he’s seen firsthand what literacy tutoring, access to free WiFi, and one-on-one job coaching can do for students and adults.

“Cultural equity is about improving people’s quality of life,” he said. “From economic development to health to education, cultural equity makes it [easy] for the entire city to thrive.”

Both Elicker and the Department of Arts, Culture & Tourism have also proposed allocating $1 million from the $6.3 million,  American Rescue Plan funded “Summer Reset” for arts and culture. Jefferson said that includes “a few buckets” of funding, including large citywide summer events and neighborhood festivals, line item funding for historically underserved and underfunded neighborhoods, and a sponsorship program for individual artists to put on neighborhood-specific programming. The city's Board of Alders has yet to vote on the proposed allocation of funds. 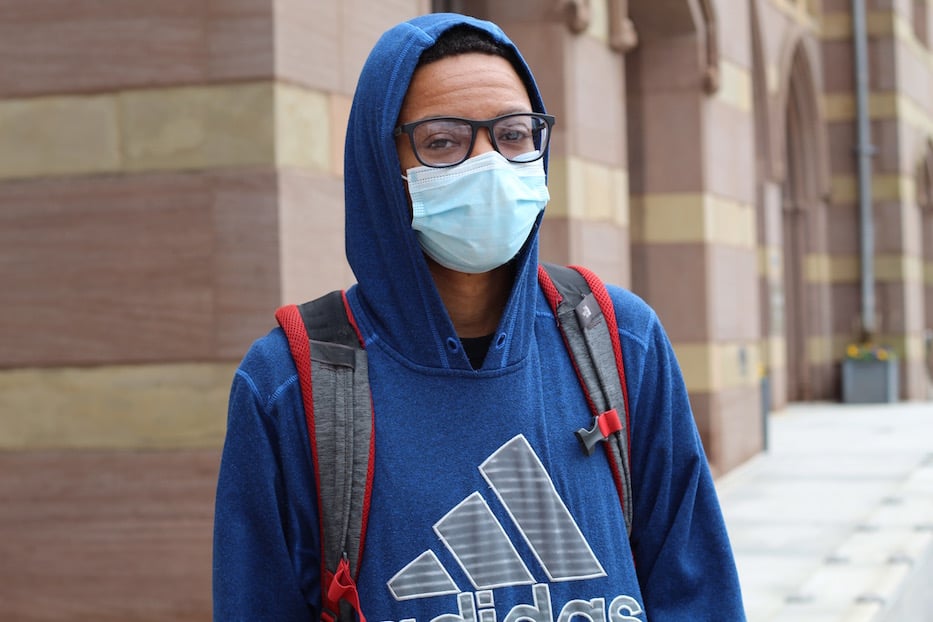 As the city thinks of next steps, it is also using the R.E.A.D.I (Relevance, Equity, Access, Diversity, Inclusion) guidelines from the Connecticut Office of the Arts as a framework. Jefferson, who was an early champion of R.E.A.D.I  during her time at the state,  said she envisions a plan that intersects directly healthcare, transportation, affordable housing, and local economic development.

“We want to make sure that it’s driven by people, and that we are empowering them,” she said.

By the end of Tuesday’s press conference, the team had gotten—and welcomed—its first taste of public input. On her way to catch the bus, Housatonic Community College student Alexis Terry stopped Rey to say she was interested in learning more about the cultural equity planning process. At Housatonic, Terry is majoring in arts and humanities. She’s particularly interested in West African art and the Gullah-Geechee history that flows through coastal Georgia and the Carolinas. When she heard there was a chance to weigh in on how and who is funded in New Haven, she was excited to do so.

“Anything that’s over here, I’m interested in being a part of,” she said. “It’s all intertwined.”

The Co-Creation Team’s public meetings, both of which are virtual, are scheduled for May 18 from 6-8 p.m. and May 22 from 12-2 p.m.  Register for them here and here. A survey will be released next week. New Haveners can also email or call the team with input at culturalequityplannhv@gmail.com or 203.951.9208.