Arts Orgs Vow To Show Up, Do Better 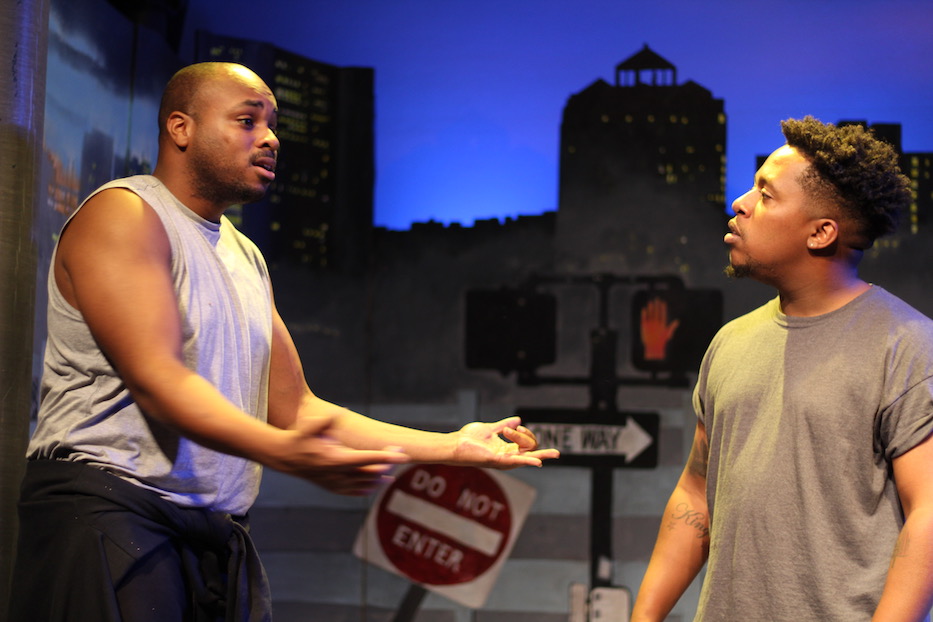 One theater has vowed to make its offices and stages safer for people of color. Another is building relationships with the Connecticut Bail Fund and Black Lives Matter New Haven. One music nonprofit posted a requiem for Black lives, and a plea to stop the killing of Black boys and men. Another suggested: don’t make statements. Just show up and do the work.

On Sunday and again on Monday, both Long Wharf Theatre and the Yale Repertory Theatre started the week with statements against police brutality, longstanding racial violence, and white supremacy following the state-sanctioned murders of George Floyd, Breonna Taylor, Ahmaud Arbery and Tony McDade.

By Tuesday, that list of local arts organizations speaking out against police brutality also included the New Haven Symphony Orchestra, International Festival of Arts & Ideas, Music Haven, The Yale Cabaret, Vintage Soul Productions, and the Arts Council of Greater New Haven. In the interest of full transparency, the Arts Paper is an arm of the Arts Council but is editorially independent from it.

They join a growing chorus of arts organizations that have spoken out against both police brutality and the racism that runs deep in their own work, and in the history of the fine and performing arts across the U.S. Last week, organizations from Minneapolis-based Button Poetry and Guthrie Theatre to New York’s Public Theater reached out with messages, action items, and virtual event cancellations in support of Black Lives Matter protesters across the country. 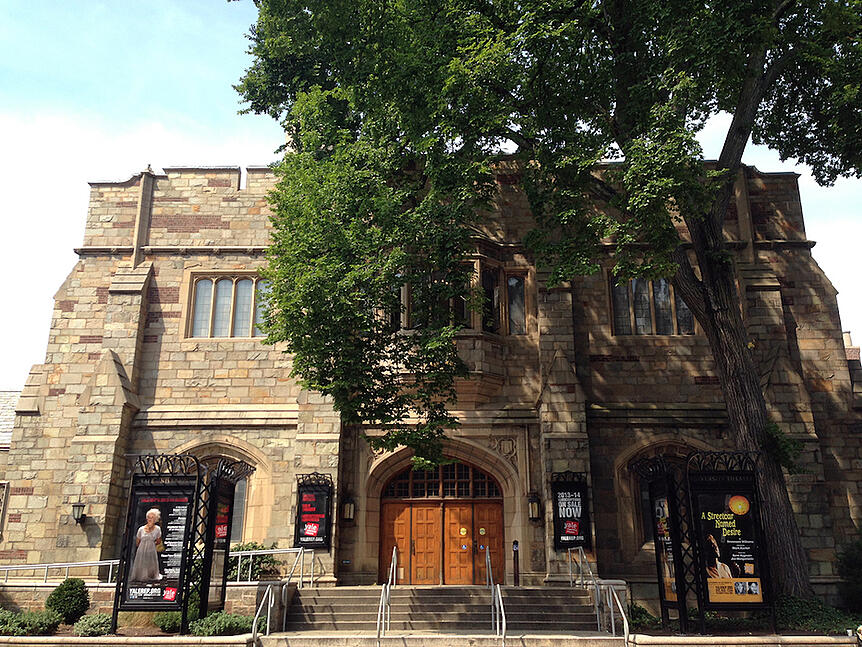 On Sunday, the Yale Repertory Theatre and Yale School of Drama sent out an email from Dean James Bundy pledging a deeper commitment to equity work not just onstage, but also in the school’s classrooms, offices, green rooms and production spaces. In an email to the Arts Paper Sunday evening, he called the email “a signal of our commitment to do better both inside and outside our organization.”

Some of that work, he suggested, has already been taking place. In 2016—as Yale students raised their voices for representation in their classrooms, their student bodies, and their residential colleges—the school formed an Equity, Diversity and Inclusion Working Group of students, faculty, and staff.

In recent years it has also offered faculty and staff training from artEquity and provided support for staff pursuing Undoing Racism training with the People’s Institute for Survival and Beyond.

“In iterative processes, we commit ourselves to ever better and more rigorous analysis and action,” he wrote. “We strive to create both institutional and personal accountability. Most important of all, this is a moment to do all we can to focus on care for our colleagues who are suffering the scourges of racism and anti-Blackness.”

He added that the school and Rep will commit to “information sharing about front-line organizations in New Haven that are doing vital work,” but declined to comment on what those organizations are. Last year, the School of Drama also undertook a cultural assessment with the consulting firm Cook Ross. Bundy said that the school is still very much in the process of sifting and implementing the results.

“The results of this survey will guide us toward better aligned practices, because we know anecdotally that members of our community can feel marginalized for a variety of reasons, and that we can improve especially on how and where we share information so that all people feel empowered at YSD/YRT,” he wrote. 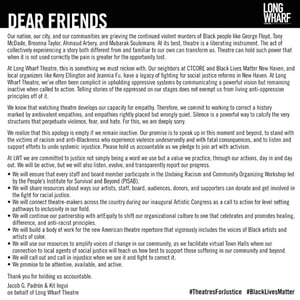 On Monday, Long Wharf Theatre issued a statement from Artistic Director Jacob G. Padrón and Managing Director Kit Ingui. Since Padrón’s arrival in February of last year, the theater has made a vocal commitment to anti-racism practices in its programming and behind-the scenes work, including a staff and board that are more diverse than they were two years ago.

With members of the greater New Haven community, the theater has also hosted a series of Undoing Racism trainings through the People’s Institute. More recently, it has been working closely with the Connecticut Bail Fund around the state’s #CancelTheRent movement. Padrón and Ingui noted the work of groups including CTCORE-Organize Now! and Black Lives Matter New Haven, as well as organizers Kerry Ellington and Jeannia Fu.

“At Long Wharf Theatre, we’ve often been complicit in upholding oppressive systems by communicating a powerful vision but remaining inactive when called to action,” the two wrote. “Telling stories of the oppressed on our stages does not exempt us from living anti-oppression principles off of it.”

They also outlined a list of action items, including resource sharing, sustained work with the People’s Institute and artEquity, an inaugural Artistic Congress announced in March for later this year, and a series of virtual town hall convenings “to amplify voices of change in our community,” Dates for those meetings have yet to be announced.

On Monday afternoon and into Tuesday, several other organizations joined in. The International Festival of Arts & Ideas, which just welcomed Shelley Quiala as its next executive director, released both a statement condemning police brutality and video pausing programming for #BlackOut Tuesday.

The New Haven Symphony Orchestra shared the gutting Seven Last Words of the Unarmed, by New Haven based composer Joel Thompson, with a short pledge to continue work towards inclusion that it has begun in the last few years.

The work weaves the final words of Kenneth Chamberlain, Trayvon Martin, Amadou Diallo, Michael Brown, Oscar Grant, John Crawford, and Eric Garner—all Black men fatally shot by the police—with a full choir and score that is visceral, elegiac, and sweeping. Monday, the organization added that the message was “in solidarity with those who are protesting today.”

“Please join us in publicly re-affirming your commitment to speaking out against violence, hatred, and bigotry,” the organization wrote on social media. “The NHSO is committed to being an inclusive organization that provides a safe space for all who wish to listen to, perform, and study music.”

The symphony has been public about a growing commitment to equity for the past two years, including its Harmony Fellowship for Underrepresented Musicians and inclusion of more composers of color. The last concert it held before COVID-19 closures in March featured the work of Florence Price, a Black, female composer who is just starting to get her due seven decades after her death.

Music Haven, which has been running its tuition-free lessons online, did not post a statement but a direct call to action: show up. In an email Tuesday afternoon, Director Mandi Jackson urged supporters of the organization to support City-Wide Youth Coalition on Friday afternoon, as the group holds a protest on the New Haven Green.

Collective Consciousness Theatre, which began with a mission of social justice theater in 2001, did not post a statement but a picture. On the theater’s stage, two actors sit side by side, a basketball traveling between them.

The scene comes from Antoinette Nwandu’s Pass Over, which the theater performed last year. In the show, a wildly poetic spin on Waiting For Godot, two characters are trapped on a corner, reliving the same day over and over again. When they try to escape, the show’s two white characters stymie their attempts by weaponizing 400 years of assumed privilege, and then becoming violent.

“Dreaming of a better world,” it read.