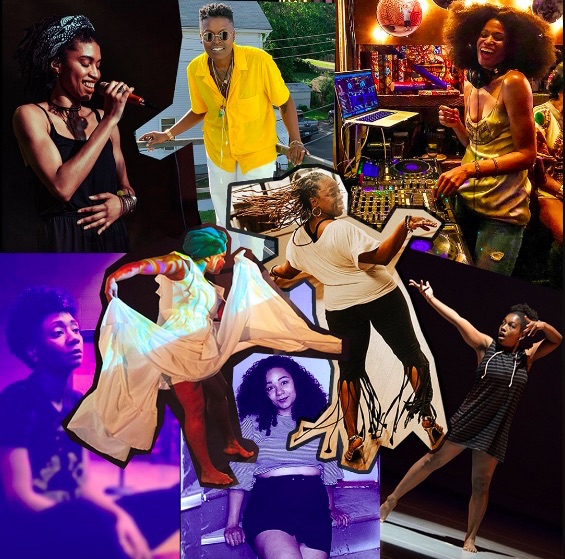 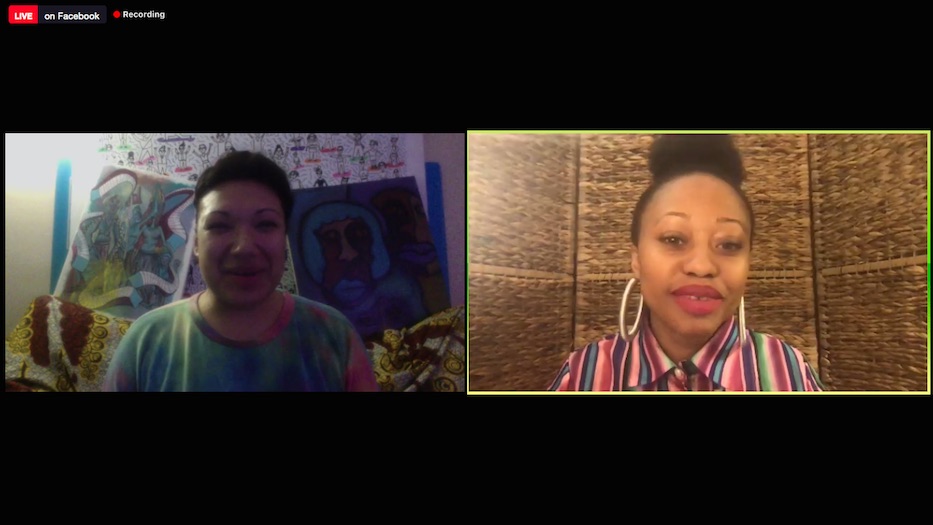 DJ Dana Game laid down the bass and mixed in horns and vocals right on time. Fernanda Franco crooned as Addys Castillo danced in a box beside her. The New Mosaic mused on the importance of sunshine, then brought in a guest who could make the message literally move. There were just a few more internet connections involved.

Saturday night, SageSeeker Productions founder Jasmin Agosto brought a long-awaited iteration of La Sala Femme to New Haven, using Zoom and Facebook Live in lieu of in-person gathering. The event, a collaboration with Long Wharf Theatre, doubled as a fundraiser for CTCORE’s ongoing mutual aid work and a sounding board for Connecticut’s growing movement to cancel the rent. Jacob Padrón, artistic director at Long Wharf Theatre, has been working with organizer Kerry Ellington on the latter.

Hundreds attended online. By Sunday, the video had almost 3,000 views and over 80 shares; Agosto said it had raised at least $600 for CT-CORE. During the evening, she also invited on CTCORE Co-Deputy Director Raven Blake and Long Wharf Artistic Producer Hope Chávez to talk about the work both organizations are doing in the midst of the COVID-19 pandemic.

“Here we are, virtually right, as it is,” Agosto said from a one-inch square, framed by paintings on either side. “As the universe pulled us into this moment, here we are. Virtually. And y’all did the thing and joined in! So that’s huge, right?”

La Sala Femme was founded in Hartford in 2018, as an artistic space by and for “Black womxn, womxn of color, non-binary, trans, and queer folx of color.” Performances are collaborative by their nature: there is dancing paired with poetry and music, live painting alongside sizzling, propulsive DJ sets, torch and fire dancing and much more.

Each time it has featured different artists from around the region, from the poet-alchemist Zulynette to dancer Loren Milledgeand to artist-activist Constanza Segovia, who is currently running the CT UndocuFund out of Hartford. Originally, the New Haven premiere was planned for May 16 at The State House. Long Wharf had stepped on as a partner on that performance months ago, and stayed on to cover the costs even after it became virtual.

Agosto praised the theater for remaining onboard, which allowed her to direct all funds to mutual aid efforts. It marks the beginning of a much longer collaboration: just before a wave of coronavirus-mandated closures in March, the theater also announced it would be working with Agosto and four other artists on a creative incubator space during its next season.

“La Sala Femme to me has been about village building,” she said. “I feel like all my homies from healers and artists and activists, community organizers, justice workers … have been showing up with all they are and all the capacities they could possibly offer.”

For the next two hours, those words echoed through digital space. Joining DJ Dana Game and the artist Marsh (Marshun Art), Agosto welcomed attendees with a tribute to her legacy, inspired by the #DaughtersOf initiative that GirlTrek launched earlier this month.

Nine performances in, she noted that there is a sense of experiment and grassroots artistry baked into La Sala Femme that now makes virtual performance possible. It’s just another unexpected threshold that the series has crossed.

“What’s amazing and so beautiful about this moment is we can actually be in our salas, our living rooms, our intimate spaces to share with you,” she said. “To share with so many who couldn’t even come and to attend. Right? To be in our actual homes and our studio spaces and our stoops tonight, and bear witness to this experience.”

That sense of community collaboration—of village building—flowed from one performance to the next. From her home in Westville, artist and One Village Healing Co-Founder Hanifa Nayo Washington lifted a chalice filled with water from the West River.

In a one-inch square to her left, Marsh continued to paint in blues, purples and greens. The colors drifted into each other, mixing like oil on the surface of a puddle. Washington’s voice coasted out over hundreds of screens as she lifted the chalice to bless the performance.

“We are here,” she said. “We must continue to always connect to the flowing energies. The flowing forces of water, the forces of light and fire, of air. To the forces of earth. There’s so much power around us and within us, and it is my greatest blessing to honor those forces.” 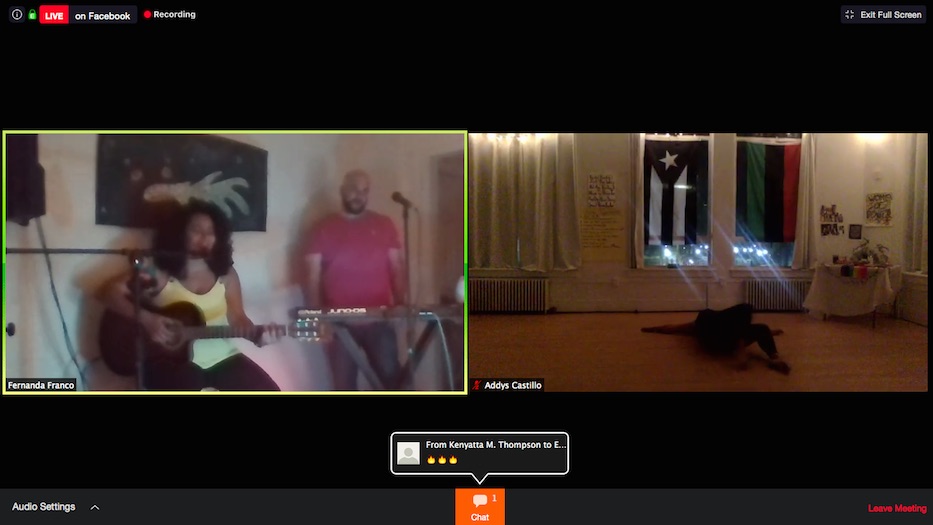 She led the group in collective movement, opening the floor—or rather the screen, or many screens—to the artistry that was waiting across the city. From the Black & Brown Power Center downtown, artist and organizer Addys Castillo danced to Fernanda Franco’s cover of “Rise Up,” which Yale-New Haven Hospital now plays every time it discharges a COVID-19 patient.

“It’s just so much more meaningful to think about in that sense, you know,” Franco said. “We will rise. It’s hard for everybody out here, but we are doing our best.”

Together but apart, they fused into one performance. In the glimmer of streetlights that surround the New Haven Green, Castillo turned herself over entirely to the lyrics, rising from the floor to lift her limbs skyward, far beyond the bounds of the building. As Franco transitioned into her own music, Castillo donned a red shawl and began to spin around the room. As she moved, she stretched the fabric between her two arms, creating a long, thick red line.

Franco moved onto TLC’s “don’t Go Chasing Waterfalls” and urged attendees to sing along, muted mics and all. From where she stood downtown, Castillo sank into the lyrics, her body gliding through the space. 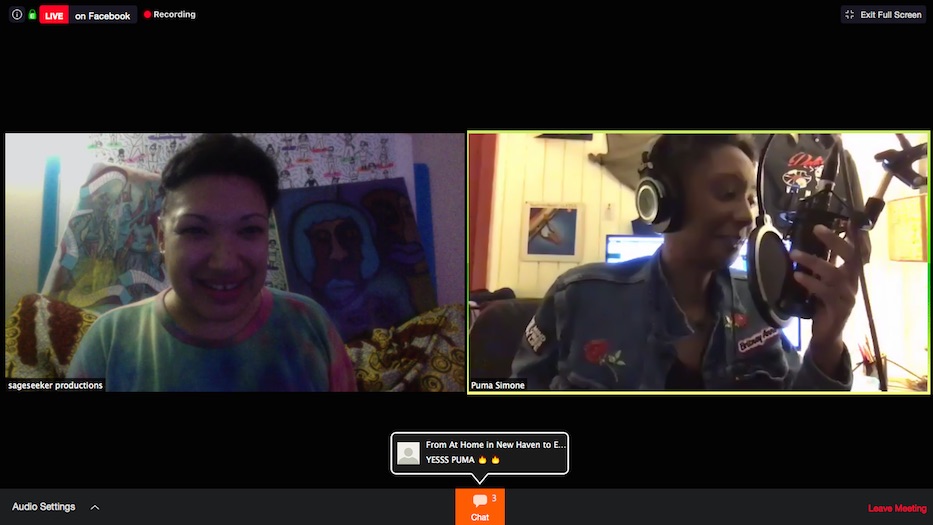 The party, it seemed, was just getting started. Blake, who is leading mutual aid work through both CTCORE and Love Fed New Haven, thanked Agosto for creating a space to be with community members, even across the internet. She praised fellow mutual aid efforts in Bridgeport, Hartford and Middletown as well as the Semilla Collective, the Socialist Rifle Association and New Haven Food Policy Council for the work they are doing. She plugged Cancel Rent CT, including a push to write, call, and tweet to legislators and other elected officials in the state.

She also shouted out Agosto on a personal note: the last time she had a reason to get dressed up was her birthday, held at The State House in early March. That venue’s doors have been closed for a full two months now, and owner Slate Liu-Ballard estimates that it has lost tens of thousands of dollars. While she has been getting out to do aid work, this was the closest thing to a night on the town that she’d had in weeks.

Form matched function: performers became neighbors as they bridged the distance with poetry, dance, interpretive movement and music. Alongside poet and spoken word artist Puma Simone, Lauren Horn created from the front stoop of her home, her body in slow, methodical motion as she moved in white pants and a matching white crop top.

As Simone sang—I’m hoping that you notice/Notice me—Horn moved carefully on her steps, her left arm extending into the night. Later in Simone’s set, Horn moved off the steps and onto the sidewalk, dancing alongside grass and quiet apartment buildings.

Spinning through originals later in the night, Erica Bryan and Tom Sullivan of The New Mosaic grooved with Sistah Anyango, founder of the FLYY Movement, as she joined from her studio. As Bryan dipped into her song “Young,” a ballad to childhood innocence written “in a very different time in the world,” Sistah Anyango moved from the back of her studio to the front, where two chairs sat still in front of a camera. She danced on, through and around them, as if they were the dance partners she could no longer have in the space. 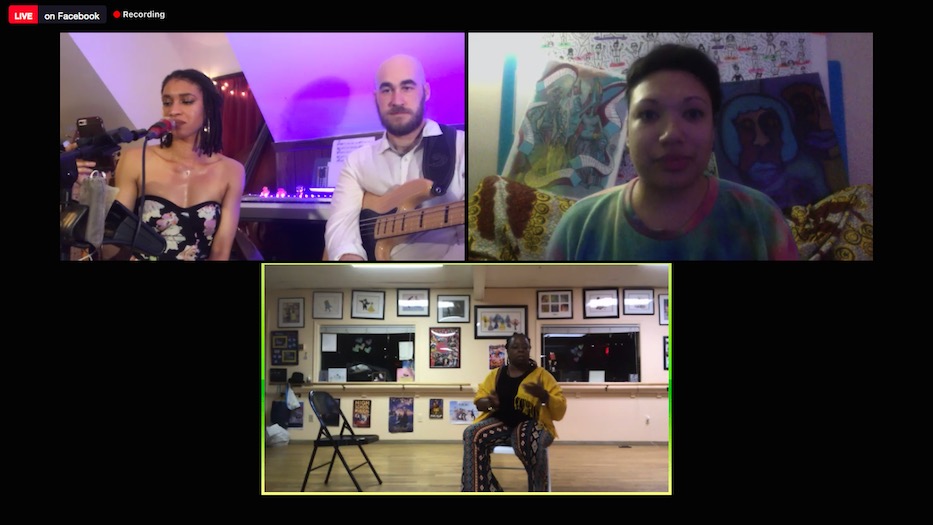 Throughout the night, collaborators stressed the value of collective action—and the potential for artists and artistry in it. Chávez, who joined Long Wharf last year, called La Sala Femme the kind of community work that has become part of the theater’s DNA since a change in leadership in 2018. She noted Long Wharf’s commitment to becoming an anti-racist space that centers community, rather than the historically white institution it has been for decades.

“This commission is really only a small piece of it,” she said. “Jacob [Padrón] and I are extremely committed to elevating New Haven artists, New Haven artists of color, queer folx, trans folx, disabled folx … it’s realy important to us that folx in the margins are brought into Long Wharf Theatre and it becomes their home.”

Towards the end of the night, the screen focused back on Washington, framed by three photos of wolves as white smoke drifted up past her face. A beat pulsed beneath her voice. Keys joined in. A bell dinged and chimed from somewhere, soft and tinny. She led a meditation on rhythm: in hearts, and minds, in dreams and DNA, in sunlight and winter.

“And we find our rhythm in each other,” she said. “And we know that we are one. And with this knowing, we live and breathe a world rooted in joy, in creation, in light, in revolution, in liberation of all.”