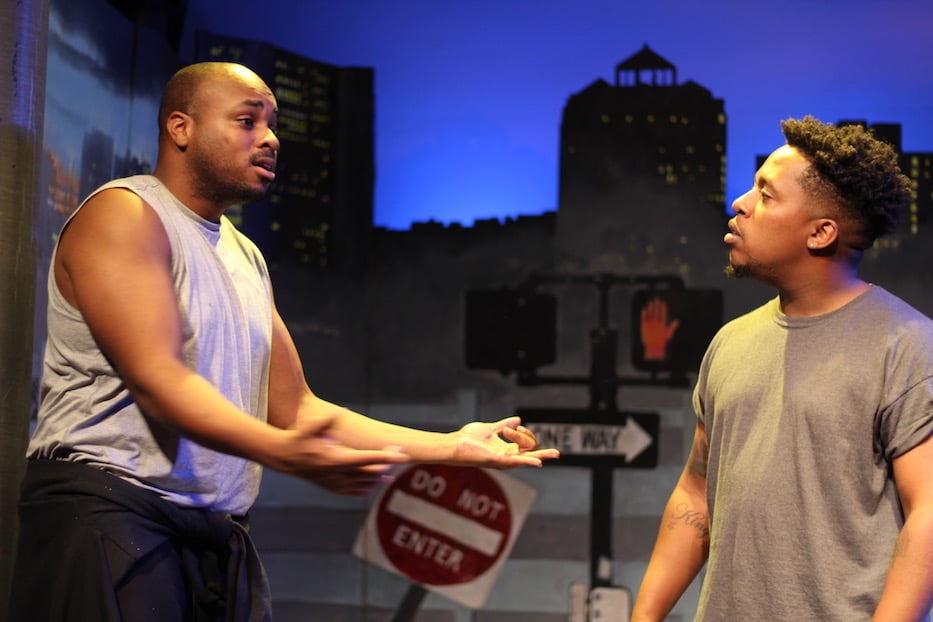 Kitch and Moses are starting the day on on their corner, and it feels like they've been there before. Kitch is on a milk crate, speeding towards a question that seems familiar on his tongue. Moses climbs down a ladder, surveys the street. Something makes his eyes go huge. Buildings twinkle behind them: New Haven, with its compact downtown and low-hanging sky.

“I got plans to get up off this block,” Moses says. He lets the phrase sink in; tosses a basketball to Kitch. It seems, somehow, more like a boulder.

The two set into motion Antoinette Nwandu’s spellbinding Pass Over, a Beckett-esque saga of anticipation, attempted escape and confinement set amid police brutality, white violence, and the throbbing reality of structural racism. As it opens at Collective Consciousness Theatre (CCT) this Thursday, the work falls into step with New Haven, giving the city the play it didn’t even know it needed.

“We’re always trying to pick themes that we haven’t specifically dealt with, and we really haven’t dealt with or approached police brutality in such a significant way,” said Jenny Nelson, associate director at CCT and director of the show. “Definitely we wanted people to know it’s here, it’s right around the corner, it’s happening right in your neighborhood. It’s also happening everywhere, and we collectively have to recognize what’s happening in the world. People can't turn a blind eye.”

With unflinching and often poetic prose, Nwandu has delivered a show that bears witness, equal parts damning and totally on point. As the lights come up on an American city—in this case, New Haven’s skyline from Grand Avenue or I-91, or a parallel universe just like it—the audience meets Kitch (Stephen Gritz King in his debut CCT performance) and Moses (Tenisi Davis), a sort of Vladimir and Estragon made for right now, when waiting on the street is not just waiting but an act of survival if you are also Black and male.

At first, it’s not clear what is keeping them there. They run through a back-and-forth that feels as lyrical as it does familiar, verbally inching toward a so-dubbed “promised land” that’s filled with the trappings of capital—new shoes, new house, new car and aquarium to match—but also world peace, first dates, and an end to police brutality. Moses is the lead and Kitch the follow, but they both prop each other up with poetic, sometimes magical hope.

The longer they talk about this land, the more it doubles as a suspension between boyhood and manhood, as if their bodies had been trapped in this in-between. Or maybe it’s someone who has held them here. There's a white “Mister” who comes and goes, and a cop named Ossifer (both roles are played by Griffin Kulp), both of whom weaponize their whiteness in a dozen different ways. To a lilting vernacular that flows between Moses and Kitch, Nwandu layers chilling wordplay from the white folks, collapsing whole centuries of history onto the present. 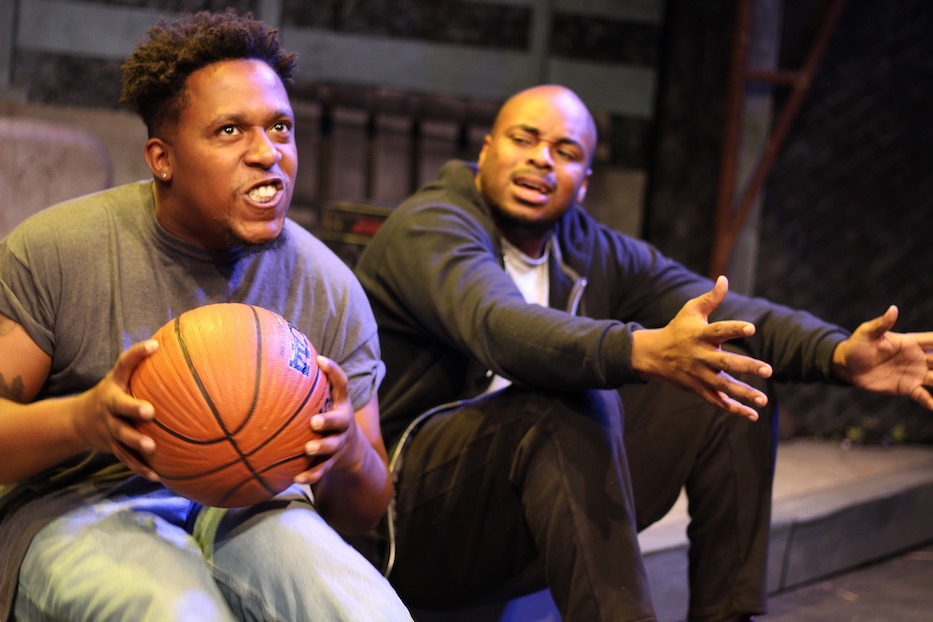 To cheeky, bitter humor that’s rooted in structural racism—toxic whiteness has never sounded as dangerous as “gosh golly gee” and “salutations!”—Moses and Kitch reply with pure poetry, tinged with contemporary dialogue and a heavy dash of magical realism. At one point, Kitch is describing a world without police brutality, and it’s literally a poem with city pumping through its veins: “Like/they guns don’t even work. Like/they get fucked up by God.”

This is not just truth-telling but a brilliant haunting, in which Nwandu has sewn the history and texture of absurdist theater onto slavery, Jim Crow, white supremacy and the carceral state. Literary references abound: Beckett but also the Brothers Grimm, Charles Perrault, Jean-Paul Sartre, “Leave It To Beaver,” and nods to the Exodus story in both the Old Testament (“them po-po be the angel of death himself,” says Moses) and the contemporary Black church.

What it allows her to do, often seamlessly, is to show the way slavery and its brutal aftermath have rooted themselves into every facet of the American mentality—and still do. New Haven may not have Kulp’s “Mister” exactly, but it does have plenty of white fragiles, who promise they aren’t racist as long as their power can remain intact. When Moses proposes that “We Egypt, you feel me?” the audience really does. 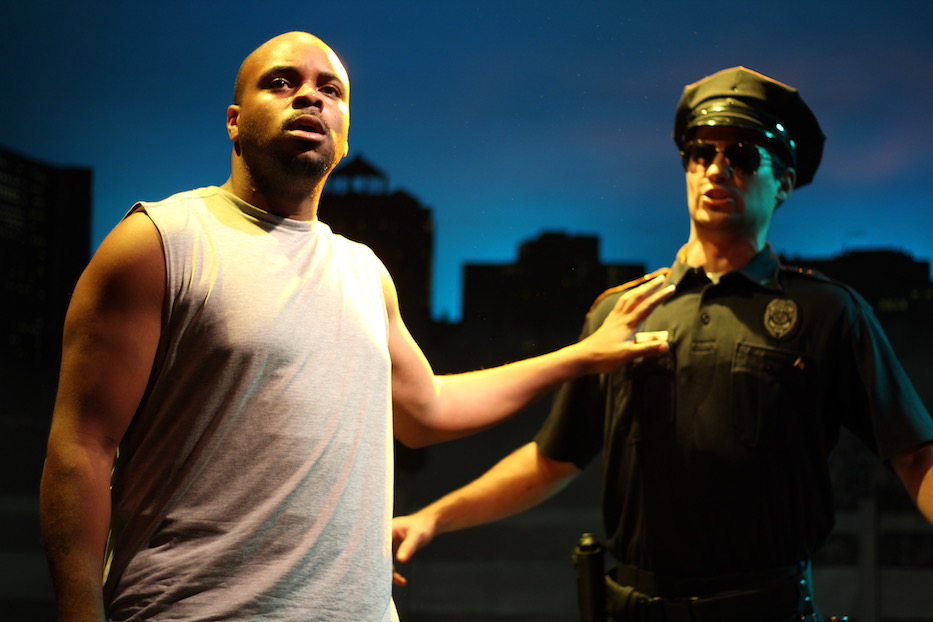 In Nelson’s able hands, the show has taken on local dimensions as well as national ones. When Kitch launches into a list of the Black men he knows who has died—a list that itself lives between kaddish, sermon, and elegy—it is impossible not to think of Stephanie Washington and Paul Witherspoon, of “Chulo” Cruz and Jayson Negron, of New Haveners advocating for a fairer Civilian Review Board to supervise police misconduct. There’s a fear, the longer he goes on, that a friend’s name might appear among the dead. Sometimes, it is so close it feels it could be knocking at the front door.

At the core of this are the cast and crew themselves, who have created a show that is gut-wrenching and timely, but never preachy. In his first role at Collective Consciousness, Gritz King is extremely nimble, quick with Nwandu’s language as he builds a chemistry with Davis, and wins over the audience wholeheartedly. Davis is spellbinding in silence and in speech, his face a well of emotion as he unfolds the weight and beauty of the work. Together, the two are electric: their friendship is the only good thing in this world, and maybe in ours too.

Kulp has given them a worthy enemy: he explores his character's whiteness and perhaps his own too, walking on the gunmetal-colored edge of violence until he teeters in. His Ossifer, whose rage is not so different from some of New Haven’s real-life officers, feels especially prescient in a city where community policing feels heavy on the policing, and not so much on the community. 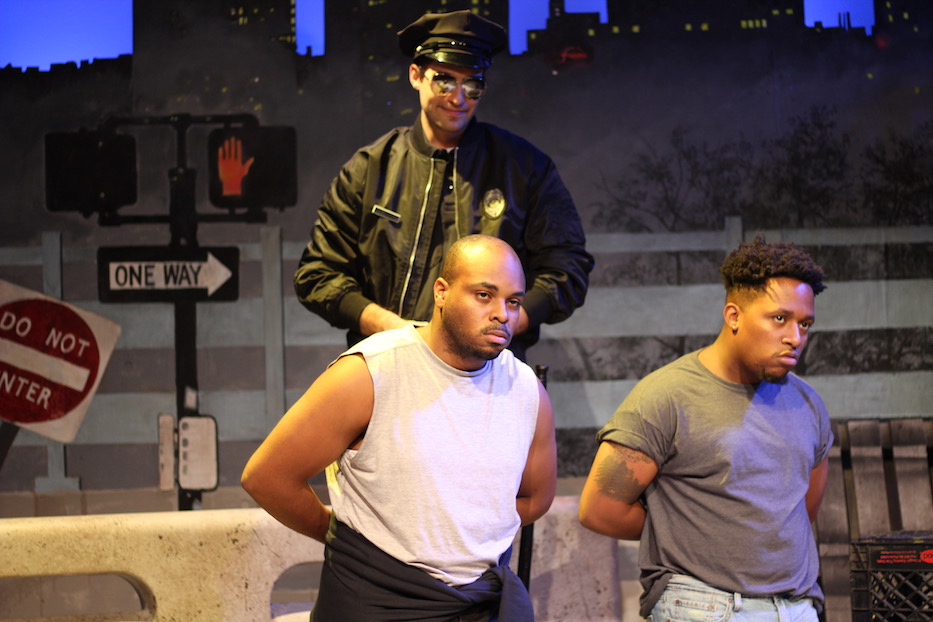 Around them, set designers David Sepulveda and Amie Ziner have transformed a street corner into a sort of concrete island, as if the city is close but never quite within reach. New Haven rises up behind them, its town-gown skyline glittering like an invitation. Behind Moses and Kitch, a traffic signal is perennially set to a wide red palm and one-way marker, the universal symbol of denied crossing (or maybe it’s denied passage) that feels prophetic.

There’s no tree from which they can, like Vladimir and Estragon, consider hanging themselves—but there is a streetlight, so old it looks as if it may wink right off.

Somewhere offstage, life goes on: babies cry, sirens ebb and flow, the sun goes down and comes up in a flush of orange-pinks, like a clock resetting itself. Credit is due to Tommy Rosati and Jamie Burnett for sound and lighting design that really works: it is exhausting, this city that is both ours and not ours. It needs to be.

“For me, it all goes back to art imitates life,” said Davis at the end of a recent tech rehearsal at the space. “This really is life for Black men, Black women. This is life. We’ve been killed for less. We’ve been killed for sitting in the house, eating ice cream. So I actually hope it does mess a lot of people up … to the point where they become humane and they want to now be a part of the solution.”