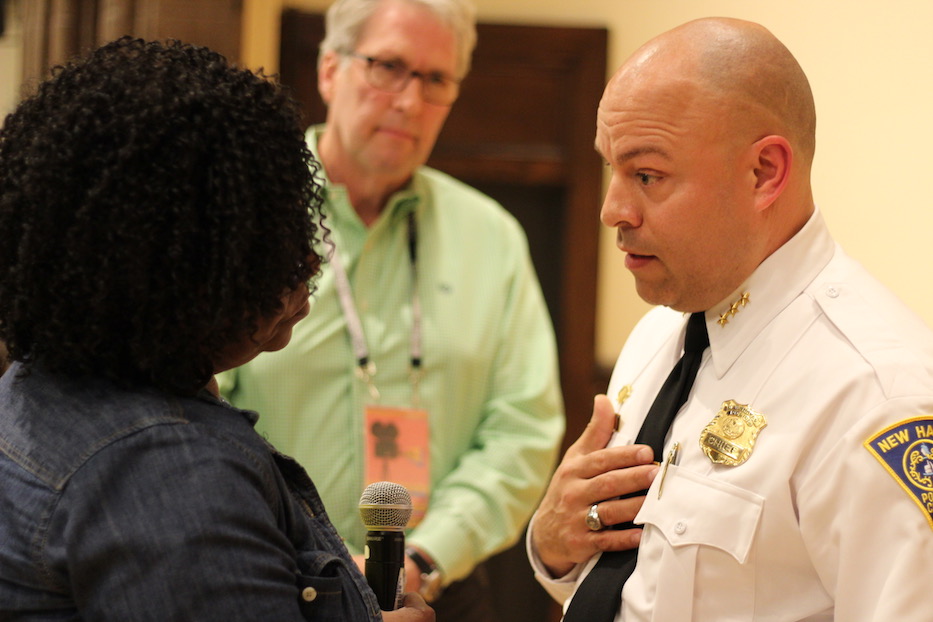 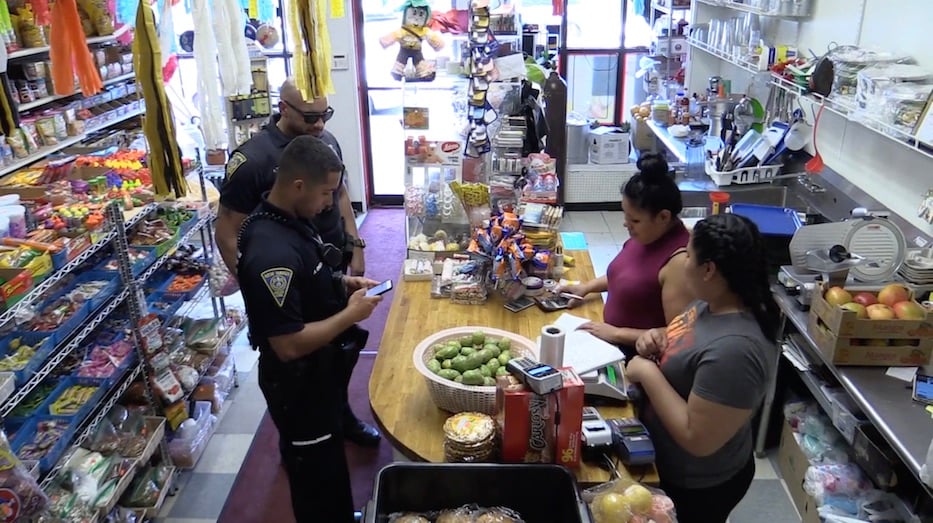 Two officers scope out a shop on Grand Avenue. Bright orange and yellow crepe paper hangs overhead; a piñata grins in a window close to the door. Two women bounce between the register and the aisles, tabulating numbers and checking racks of dried goods. Officer Alex Rivera makes smalltalk with one of them in Spanish. He’s not responding to anything in particular, though—he’s just on his regular walking beat.

Is this community policing? Is it something else? Is it working?

Those are some of the questions director Steve Hamm asks in his new documentary Shift Change: Community Policing In New Haven, which premiered last week at the New Haven Documentary Film Festival. Over 200 New Haveners packed the Whitney Humanities Center for the screening, which was followed by a discussion among Hamm and Interim Police Chief Otoniel Reyes, longtime community activist Barbara Fair, Project Longevity Director Stacy Spell.

The discussion was moderated by New Haven Independent Editor Paul Bass. Hamm said that he hopes to host further screenings in the community over the next several months, to keep the conversation going. The next will take place on Saturday June 15 at the Wilson Branch Library at 2 p.m. 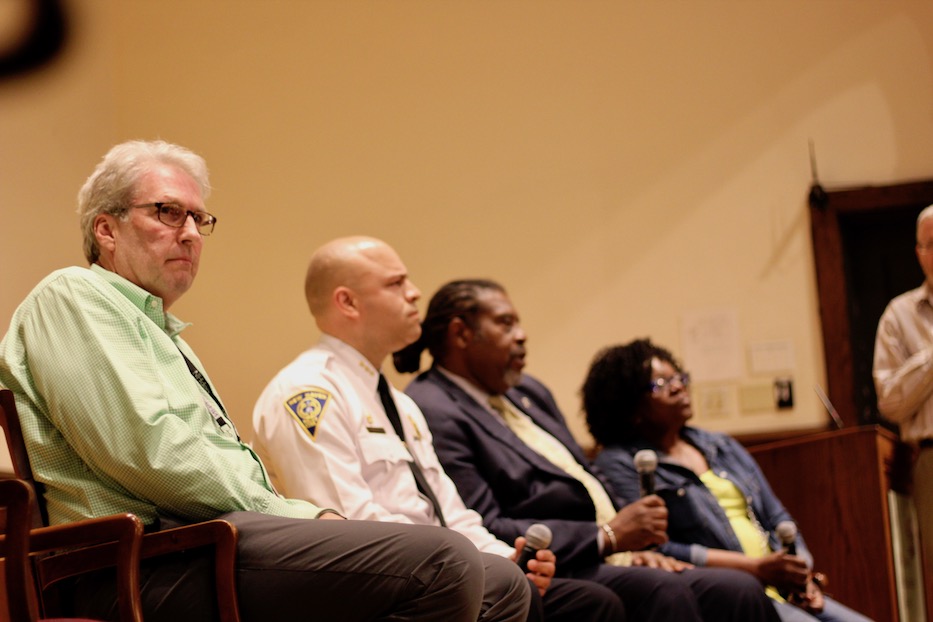 From its beginning—a hammering, persistent drumbeat that cues the viewers in—the film scratches the surface of a discussion decades in the making. Hamm drops his viewer right into the policing debate with a gut-churning sequence: the shooting of 22-year-old Stephon Clark by police in his grandmother’s Sacramento backyard, and then of Los Angeles Police Department Capt. Patricia Sandoval in fall 2018. It's the first of several scenes of graphic violence including an open casket that viewers get to see before 60 minutes is up.

Before that grainy footage, New Haven Officer Matthew Stevens explains that cops responded to a call on a bipolar schizophrenic on the Grand Avenue Bridge, and made the decision not to fire. Images from the bodycam roll; cops appear back on camera to look back on the incident and reflect on what they did right. Photographs of the bridge pop onto and off of the screen. Then viewers are watching the shootings of Clark and Sandoval, with a voiceover that cops may have a reason to fear for their lives.

It feels like a false equivalency, where the bar for being a decent human being is not mortally wounding someone with your state-sanctioned weapon. Is this the world we want, where a person with a gun, badge and union behind them is lauded for choosing not to injure a person who may not have any of those things?

Hamm presses toward an answer as he contextualizes the question, giving a short history of community policing in New Haven. He travels from police presence during the Black Panther trials of 1970 to community policing’s formal 1990s, and then on to today. He brings in retired Chief Nick Pastore, who served from 1990 to 1997, as well as political scientist and author Douglas Rae, Bass, Yale Law Professor Tracey Meares and others.

And then he gets to the heart of the matter: community policing itself. Sort of.

As it hones in on the Fair Haven neighborhood, Shift Change follows Fair Haven District Manager Lt. David Zannelli (he has since been reassigned to head up Internal Affairs) and several beat cops as they walk the neighborhood, attend community management team meetings, check in with neighbors and investigate calls that have come in during their shifts. Hamm interweaves a summary of policing in the last year or so: growing unrest with the transfer of several district managers, contentious long-expired union contracts, and Anthony Campbell’s departure in February.

It can feel like a lot of policing, and not so much community. There are snippets of cops interfacing with New Haven: men play pegao in Criscuolo Park, beat cop Cesar Gutierrez dances with some old biddies on the street and then returns to their building for a drug call. A sex worker and Sex Workers & Allies Network (SWAN) Director Beatrice Codianni praise Zannelli for his work in Fair Haven, where police implemented new procedures for sex workers in late 2016.

In another sequence, Officer Richard Benson gets in the ring at Boxing in Faith Gym, and viewers get to see him being a normal person. A voiceover explains that when one of the beloved coaches, Luis Rosa Jr., died after an auto accident, he received an escort from the police motorcade because of the affinity he had for police, and vice versa.

And viewers do get criticism of the police—at least a little. Fair speaks directly to the camera at points, as does Dixwell resident Rodney Williams and Unidad Latina en Acción Founder John Lugo. There’s footage of the police at their most reactive: Nate Blair’s violent arrest at an anti-Trump rally in 2017 (in which both city and state cops were involved) as well as the recent shooting of Stephanie Washington and Paul Witherspoon at the hands of Hamden and Yale University Police.

But most of the testimonies viewers hear come straight from law enforcement and elected officials—meaning the cops, for the most part, look great. Shots alternate between close-ups on officers’ faces, glimpses of Grand Avenue and the Quinnipiac River, sidewalks, and the interiors of New Haven homes and police substations. There’s lively discussion, occasional laughter, and a few teens who describe the officers who have made differences for them.

Which is fine—when it’s the whole story. In one sequence, now-departed Chief Anthony Campbell speaks a class of new recruits about the importance of knowing his officers “have eyes, and ears, and most importantly hearts that are open to serving” the districts in which they are placed. He praises the department’s relationship with Yale Child Study Center, which has become a model for other forces around the country.

It’s a compelling speech, overshadowed by the unmentioned fact five of his police officers have been arrested in the last year on domestic violence charges, and are still technically on the force (on paid leave)—meaning that they can police the women in their lives even when they’re not policing the citizens of New Haven. 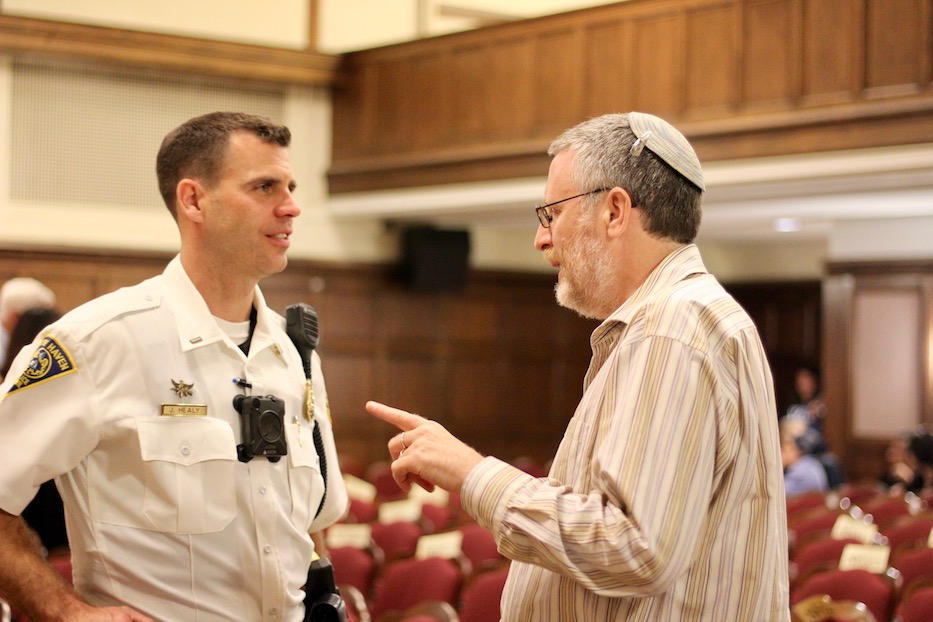 There are several factoids like that that don’t make it in. The film discusses dirt bikes, but doesn’t talk to those riders. It notes sanctuary status, but glosses over the Trust Act. It spends time with the Fair Haven Community Management Team, but never mentions that the substation where it was held was contested—because it was a police substation.

And it depicts several of New Haven’s activists as angry and loud Black women—instead of taking to them one-on-one instead. Nowhere in the film does Hamm sit down with  activist Kerry Ellington,, Black Lives Matter New Haven Co-Founders Ala Ochumare and Lauren Pittman or Sun Queen, Ashleigh Huckabey or photographer and political organizer Arvia Walker.

Shift Change’s greatest strength may be the ability to catalyze discussion, which it began to do as soon as the lights came up after last week's premiere. As the audience welcomed Hamm and other members of the panel with applause, both speakers and audience members began to dig on what this means for community policing.

“Community policing—I think first we need to redefine it,” said Fair. She recalled watching the system in its earliest years under Pastore, and really believing that it was working. Now, she told the audience, she speaks to a number of officers who say they are leaving New Haven’s force because they feel that the system is toxic.

“So I think we need to change the whole culture of policing in New Haven and across this country,” she said. “And until we do that, it’s like Pat [Attorney Patricia Kane] said [in the movie]. It’s like we’re putting lipstick on a pig and pretending it’s not a pig.”

“Community policing has to evolve,” chimed in Spell. “As we evolve we have to make a great emphasis on not just the police, but the community has to play a role. Because if we let just the police lead, we’re gonna be in the same situation.”

“We, especially Black and Brown people, were cut out of the system for decades,” he continued. “As we now become part of the system … now is the time for community people to embrace, to support and to get in line and to make sure that their voices are heard.”

Reyes, who was born and raised in the city’s Hill neighborhood and then returned as its district manager, noted that he understands Elm Citizens’ complicated relationship with policing—that is, having police, contacting police, and still being policed—because he has lived both sides of it.

“A strong community isn’t one that’s full of police,” he added. “It’s one that doesn’t need the police.”

In making the film, Hamm said, he knew he wasn’t going to get to everything he wanted. He listened And now, he added, he hopes that there will be more talking around the film.

“The idea behind the film was to help people with different views on life and different experiences to see through another person’s eyes.” he said. “In multiple perspectives. So a police officer could see things maybe they hadn’t thought about before, and a community member could see things that maybe they hadn’t thought about before—with the idea of having a conversation about really reaching some new conclusions about ‘how can we do it better?’”