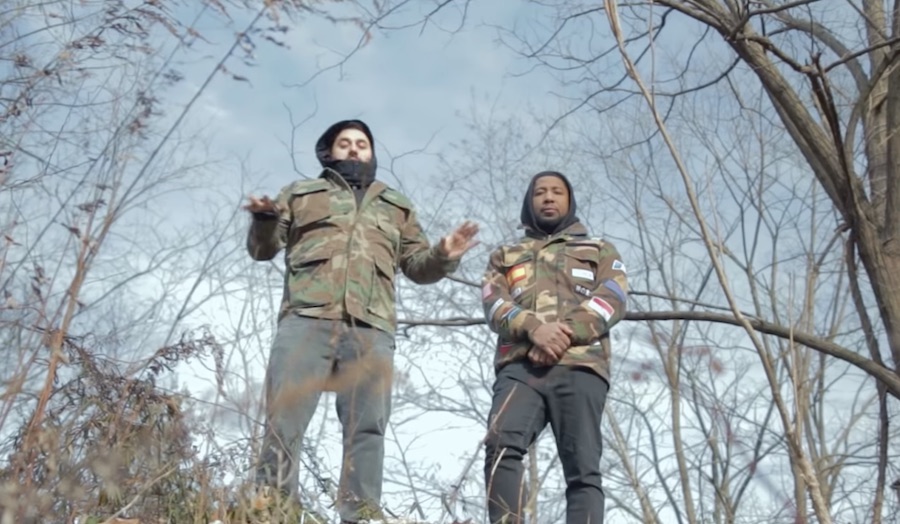 The first shot we see is a long pan: two fences in two countries, with activists and law enforcement on each side of both. Synth hums and a siren sounds in the distance. Then the musicians appear, a mix of camouflage and green with worn jeans. Behind them, the backdrop keeps shifting: New Haven’s Union Station, New Haven's Winchester Arms Factory, a grassroots meeting for immigrant rights in First & Summerfield Church. The city keeps expanding.

That’s the story in Jahan Nostra’s new video for “El Chapo,” a song he penned in political protest in 2016, then commissioned a video for earlier this year. On the piece, produced by Hamden native Henry Gelperin, Nostra shares the mic with New Haven musician Ceschi, who is dropping his own new album at The State House and Cafe Nine this Friday. Nostra released the video April 1, in honor of César Chávez’s birthday last weekend.

The idea for “El Chapo” began well before the 2016 election, when Nostra saw a series of tweets fired off by then-candidate Donald Trump reacting to drug kingpin Joaquín Guzmán’s—a.k.a. El Chapo—escape from prison in 2015. In a small Twitter tirade, Trump insisted that El Chapo was not only dangerous, but a living example of the need for a border wall, which became one of his signature campaign promises. As he did in later tweets calling MS-13 gang members “violent animals,” Trump conflated El Chapo with all immigrants crossing the border, raising false cause for alarm. 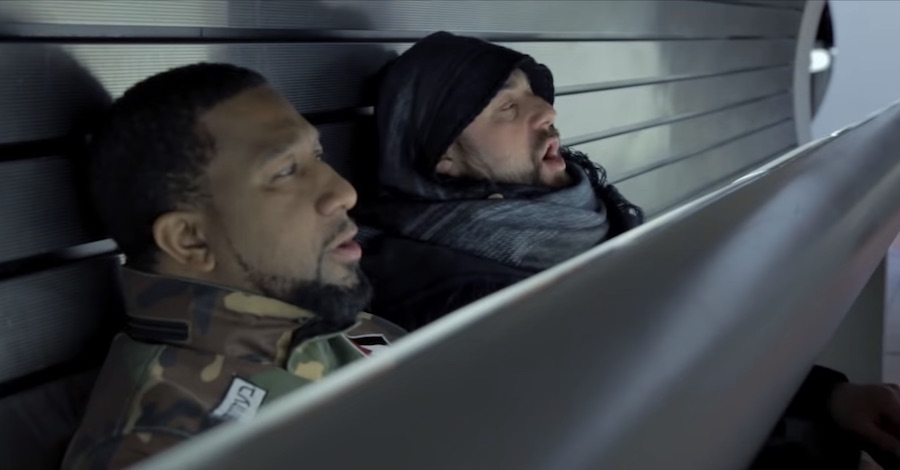 “I understand that this is a game, it’s politics,” Nostra said in a recent interview at Cedarhurst Cafe. “But the danger in it was that he was using El Chapo as a fear tactic. And when I saw that, I was like ‘woah, this is a buzzword.’”

Nostra watched as a Twitter user who said he was Guzmán’s brother fired back at Trump, taking him to task for the remark. He began writing the track, calling it “one of the more rebellious things I’ve done.” He also reached out to Ceschi, who he'd met while doing a Hip-Hop for the Homeless show in New Haven. A year before, the two had found themselves talking about “the way the prison industrial complex benefits off people.” To Nostra, it was exactly the voice that was missing.

“In hip-hop, you have mainstream and you have what you call the streets,” he said. “And the streets wanted this song.”

On the track, Nostra takes the first verse, yoking the injustices of deportation with some of those that Americans see in their own cities, disproportionately taken out against people of color. He takes on Trump (“Trump Towers? Homeboy I’ll pull your Trump card/Teleprompters got you gettin’ fake applause.”), sews in references to both current news and pop culture, then hits the chorus running.

Truth lies behind these walls/El Chapo
Free for my love and my cause/El Chapo
Tryin’a make it to the U.S./El Chapo
Working me and mine to death/El Chapo

But it is when Ceschi steps in that the piece’s heartbeat accelerates, conjuring images of the U.S.’s own prison industrial complex alongside a series of atrocities at the border. In the track, his voice cuts in clean and clear, listeners doing a mental sprint to keep up with every word.

They’ll never take me out/Show me dead thrice/Shut my mouth
Told me I’d never be anything but who’s laughing now?
Never had much of a privilege but education
So at least I know I’m getting fucked for the system on a constant basis

Climb my way out of a cell if I have to
C.O.s like Rick Ross get paid off then we take off and we make do

Those words come to life a second time in the video, in which Nostra and Ceschi bounce between New Haven’s Union Station, the old Winchester Repeating Arms Factory, New Haven's Science Park neighborhood, and a meeting of Unidad Latina en Acción (ULA) at First and Summerfield United Methodist Church, where immigrant Nelson Pinos has been seeking sanctuary since November 2017. With the release, he yanks the lyrics into Trump’s presidency and an ongoing humanitarian crisis at the U.S.-Mexico border.

Shots ground the viewer in New Haven, taking them on a tour of the city (literally starting with Union Station) where affordable housing and immigration reform are both implicated through setting. Some of the most moving scenes unfold at First and Summerfield, as Nostra performs the piece at ULA’s weekly meeting, then poses with Pinos, his family, and members of the local activist community to sing the final chorus.

Working with activist and artist Vanesa Suarez, Gelperin also spliced in Suarez’ own footage from Tijuana, where she traveled in January of this year to provide translation services and case management to immigrants and asylum seekers fleeing Honduras. She plans to go back to provide more aid and is currently raising funds to do so.

“I offered it because I was like, ‘this should be public information, what is happening down here,’” said Suarez in an interview Tuesday, adding that her trip was the first time she saw firsthand how the U.S. and Mexican governments collaborate to keep immigrants from passing safely into the U.S. “We’re thinking of our migrant brothers and sisters at the border, and when I was looking into that, it was crazy to see how they were treated.”

Suarez said that when Nostra approached ULA, she was impressed that he wanted to get to know the group, instead of swooping in to document an action and leaving immediately. She and Pinos listened to the track together, playing it several times. She translated it into Spanish, to explain the premise to members of the group who speak little or limited English.

And then in February, Nostra joined the group for one of its regular Monday night meetings, recording the final chorus with members toward the end of the meeting. As the shot unspools on film, it feels brave and triumphant: activists embrace, Pinos pumping his fist on the right side of the group, with his young son Brandon holding his hand and singing. But for Suarez, it also doubled as a moment to reflect on ULA’s work within New Haven, looking at it through outside eyes.

“I think he [Jahan Nostra] saw so much value in a space that we’ve gotten very used to every Monday,” she said. “To step back and see the value of folks taking time to organize, it really reminded us that’s that’s part of the struggle too.”

That’s part of the video’s greater spirit, Nostra said. While he was still envisioning the message he wanted to send, the 38-year-old tried to add a local component to a song that is meant to have national implications. Raised in Stamford, Nostra became interested in writing when he was young, inspired by music that ranged from Tupac to Bob Dylan to the soundtrack for Les Miserables. He said he loved “the ability to put poetry to music,” a tactic he tries to take in the song while also getting the message across.

It’s not meant to come off as unpatriotic, he said. To the contrary, he's trying to use criticism as a catalyst for social change.

“I love America,” he said. “It’s like a woman being with a guy and she knows he can do better. The constitution is real. I believe in it. I believe in justice for all. I think Benjamin Franklin, Thomas Jefferson, Abraham Lincoln were visionaries. But we need to tweak it to handle the moral standards, the moral values of this country.”