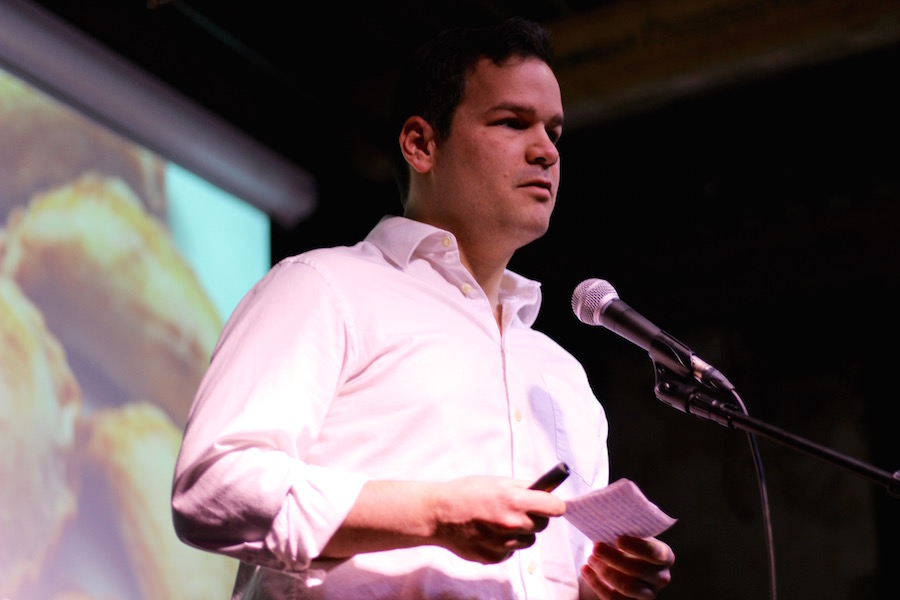 Ana Benitez didn’t know where she was going to get a job when she arrived in New Haven last summer from her native El Salvador. Then she started making her pupusa recipe.

Kaïna Mondesir learned what Diri Ak Djon-Djon was by watching her mother’s hands—then saw that New Haven cooks had no idea what the dish was.

And Eduardo Juan Delara-Alarcon thought that empanadas were the go-to food for people on the run. Then he moved to New Haven from the Dominican Republic, saw a hot dog stand downtown, and wanted to show New Haveners what they were missing.

Tuesday night, those were just three of the 15 food startups to share their origin stories as part of a Food Business Accelerator Pitch Day, the culmination of a 10-week training program from CitySeed and Collab that seeks “to remove barriers to food entrepreneurship across the state of Connecticut through training, network-building, and access to resources.” Held at The State House, the event drew over 100 attendees. 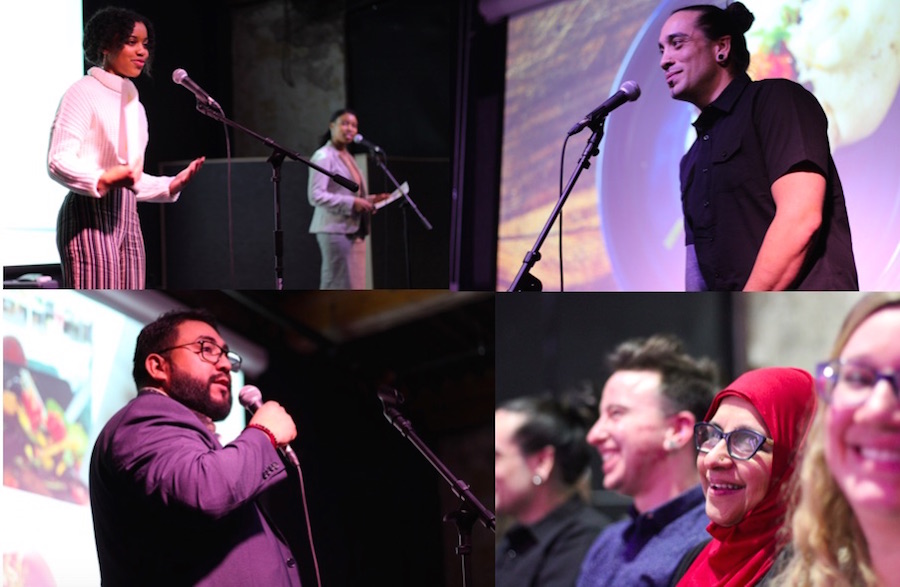 Last year, Collab Co-Founder Margaret Lee said the program received over 40 applications for 15 slots. In keeping with the accelerator’s “vision of inclusive growth in the region,” 73 percent of projects selected came from people of color, and 60 percent from women. Both Lee and Michael Piscatelli, interim economic development administrator for the city, praised the ventures as paving the road to new job growth in the city.

“There are spaces that New Haven has the right to own,” said Piscatelli. “Food very much matters.”

The 15 selected (read about all of them here) include small-batch hot sauce and chutney operations, local coffee roasters, attempts at vegan soul food from New Haven and Israeli-raised chefs, a supermarket stocked with ingredients from the African diaspora, and sweet treats made with both superfoods and sticky pink strawberry foam. Several have already announced that they plan to collaborate with existing Collab and CitySeed ventures, including HomeCooked and Sanctuary Kitchen.

As the accelerator takes on entrepreneurs of various backgrounds, it has also displayed a common commitment to bringing diasporic and sometimes ancestral recipes to the city, not only as a way to diversify New Haven’s palate, but as as a means of economic self sufficiency and survival.

Forget The Wall, Eat A Pupusa

Activists by day, chefs by night. That’s how Unidad Latina en Acción (ULA) members Vanesa Suarez, Hazel Mencos, Ana Benitez and Lluvia Gonzalez pitched their nascent immigrant- and worker-owned cooperative, La Pupuseria. Over the next months, La Pupuseria is planning to start small, with a number of New Haven pop-ups that will give it the financial base it needs to expand. Ultimately, Suarez said the team would like to own a food cart or truck, to make their operation more mobile.

Just as the name suggests, it will specialize in Salvadoran pupusas, thick, corn tortillas sliced open and stuffed with fillings that can include cabbage, chicken, beef, beans and cheese.

“They are really made with love,” Gonzalez said. “Latin food is made with too much love. It’s homemade food!”

Suarez said that the idea for a pupuseria has been percolating for over a year. When immigrant Nelson Pinos went into sanctuary at First & Summerfield United Methodist Church in November 2017, ULA began holding food-based fundraisers to raise money for his family, continuing a legacy Marco and Fanny Reyes had left with savory, hot empanadas just months before. Meanwhile, they struggled to help Pinos’ wife, Elsa Calle, find a job.

Then last summer, Benitez arrived in New Haven from El Salvador amidst legislation that had separated her family at the border. Members of ULA tried to help her find a job, struggling once more because of Benitez’ documentation status and role as a single mom.

Suarez looked at a growing number of women in the organization who needed work—Calle and Benitez, but also Mencos, who came to the U.S. as a dreamer and turned 18 earlier this month. Despite having won a case to remain in the U.S. and pursue citizenship, Mencos is still waiting for documentation, meaning it is hard for her to land a job.

As she and other members searched for potential employers, they found the answer within the organization—Benitez’ savory Salvadoran pupusas, authentic to a home that was no longer safe for her to return to.

“Once we started doing fundraisers for pupusas, everyone was like ‘this is it,’” Suarez recalled. “And we were like, what if this is the way that we as women can create a job as ourselves? Why go out into a workforce where we know that the first thing that’s going to happen to you is to be exploited?”

With Benitez by her side, Suarez said that a worker-owned co-op will provide a shift that ULA has long made their rallying cry: an end to economic exploitation through economic freedom. After immigrating to the U.S. from Peru, she took a job in the service industry because she couldn’t afford not to. That was also the case for Erick Lopez, a partner in the co-op who has worked several jobs in the restaurant and service industry, often coming face-to-face with wage theft.

“How do we sustain the work that we do in ULA when we’re forced to go into these jobs that pull us away from the community?” she asked aloud. “When there’s an important action, our bosses don’t always care to give us a day off! My boss doesn’t care what I have to do. So what does it look like for us to be the owners of our business? For me to say, we should shut down on May Day. We should shut down when there’s an important action. And how do we have jobs that create social justice?”

In the coming months, La Pupuseria will be getting off the ground with several pop-up events that will be advertised on social media before they take place. Suarez said they are looking for funders to both come to the events, and help the group invest in a food truck that will allow them to have a mobile kitchen space that is their own.

“In our community, we don’t believe anything is yours,” she added. “You share your recipes. You share anything that you have.” 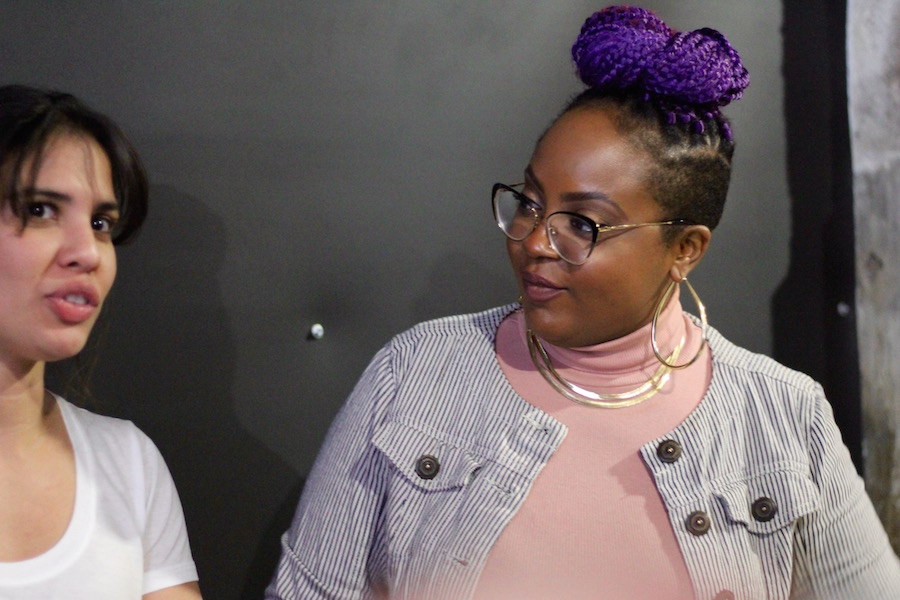 Before Kaïna Mondesir was ever the head of a small business, she was learning that food and cooking was a way to keep cultural heritage alive. Now, she is the founder of Kina’s Kitchen, a Haitian food startup and catering company that she hopes to grow from an apartment to a food truck.

The child of two Haitian immigrants, Mondesir was born in Boston, raised there for the first several years of her life before another move took her to New Hampshire, and then back to Boston. As a kid, she developed a habit of watching her mother and aunts in the kitchen, learning to mix black mushrooms and lima beans into rice, fold dough, and whip up fast meals by cataloguing every movement of her hands.

When both of her parents went back to school, she took over the bulk of meal prep and cooking for the family. It was a slow transformation, she said—she learned dish by dish, moving from simple recipes up the line. She was about eight years old.

As she learned to navigate pots and pans, burners and oven temperatures and which vegetables that looked best at the farmer’s market—”I grew up traditional Haitian, so I had to know how to cook,” she said—Mondesir also grew into her voice, starting to gig along the Northeast Corridor. She moved to New Haven to be closer to a cousin last June, after realizing how much she was commuting.

But as she settled in, she realized that the state’s pickings for Haitian food were relatively slim. There were Haitian outposts in Norwich, Norwalk and Bridgeport, but nothing in New Haven. That’s where she sees Kina’s Kitchen fitting in.

“Food and cooking for me has always been wrapped up in love and community,” she said to attendees Tuesday, a photo collage of her family flashing across the screen behind her. “Think of it as a paint night, but with delicious food.”

From a small catering and cooking outfit in her apartment, Mondesir said she is planning to find commercial kitchen space, and then raise the funds for a Haitian food truck. She has already taken a kaleidoscopic outlook to the startup, partnering with the former Collab ventures HomeCooked and Pascale's Body Care for several of her first pop-ups. During a mingle and nosh afterwards, she extended that same approach to other businesses in the accelerator, planning a spring collaboration with Royal Vegan’s Marvis Brown.

If people are interested in learning more, she said, “let them know there’s a first-generation Haitian-American woman running around New Haven with purple hair and I just want to feed everyone.”

All The Empanadas, All The Time 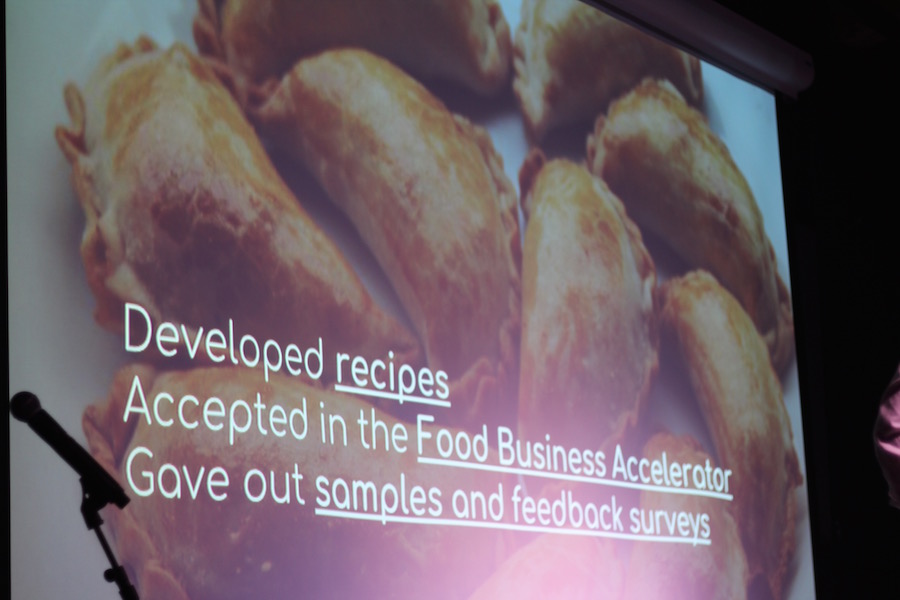 Eduardo Juan Delara-Alarcon grew up in Santiago de los Caballeros, Dominican Republic, thinking about empanadas. As a kid, the doughy, stuffed envelopes were synonymous with weekends at his grandmother’s house, orbiting his 25 cousins like a small, euphoric planet. They meant long days spent outside with his brother, where they were served flavorful and piping hot as a beloved street food. Or time in the kitchen, watching as his parents turned dinnertime into an imprecise ballet.

“So it’s in my blood,” he said. He had decided, by the time that he was in his teens, that Santiago was easily the best city in the country. But he was restless too, and could feel it even as he savored his favorite street food.

Then two years ago, he moved to New Haven to connect with family. They moved away, to North Carolina, and he decided to stick it out on the East Coast. But he noticed that something key was missing from his new home—the empanadas that had so defined his youth. When he found empanadas, they were usually in restaurants instead of on street corners. They only came stuffed with beef, chicken or cheese. And for Delara-Alarcon, they simply would not do.

At 30, he is starting up Republic of Empanadas, a sweet and savory empanada business intended to make a warm, envelope-shaped footprint on New Haven—and experiment with flavors for a food that already has countless regional versions.

“The Republic of Empanadas will offer all kinds of sweet and savory fresh empanadas with seasonal flavors made with local ingredients in New Haven, for New Haven,” he said Tuesday. “Just imagine … curried chicken empanada! Feta and spinach empanada. Pumpkin spice in the fall. Lobster roll empanadas! Apple pie. S’mores.”

He added that he envisions including fellow businesses in the accelerator, finding a way to integrate Dave’s Angry Sauce, soup from Sopa, or perhaps Filipino food from Kawit. Since starting the accelerator in November, he has worked on beta testing his recipes, trying to make his empanadas so quirky and unique they are “the best ones in town.”

He said he intends to start as a food vendor at farmers’ markets around the city, then expand into selling at stores and catering, and taking over a brick-and-mortar space. The accelerator has been helping him with the paperwork it takes to become a limited liability corporation.

“Go to the farmers’ market, tell me that you saw me here,” he said. “And you will get an extra complimentary smile.”

To watch more from the pitch day, click on the Facebook Live video above. All of the businesses in the accelerator are starting or growing their social media presences. La Pupuseria is available at vanesasuarez94@gmail.com. Reach Eduardo Juan Delara-Alarcon at republicofempanadas@gmail.com. Kina's Kitchen is on Instagram at kinas_kitchen.