Hartford Turns Up For Nelson 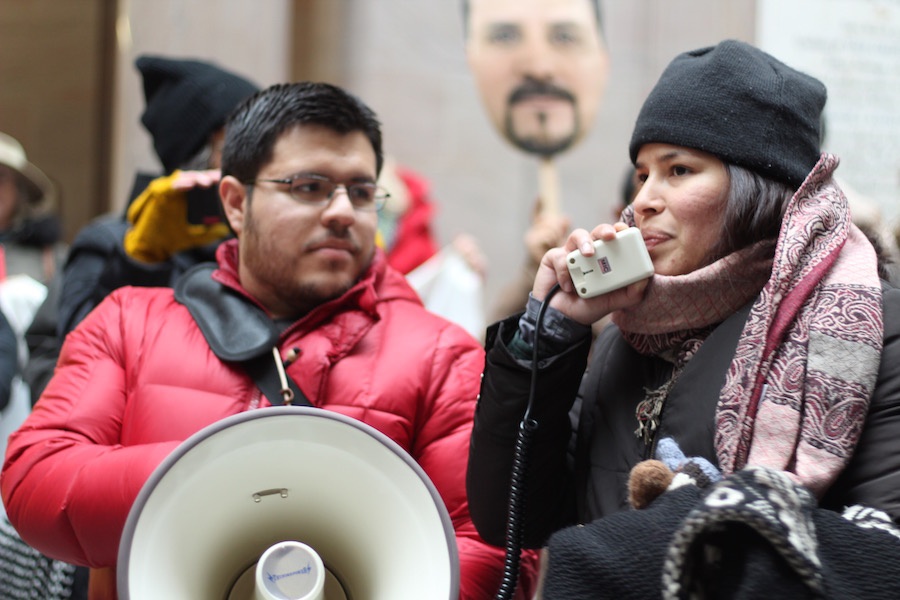 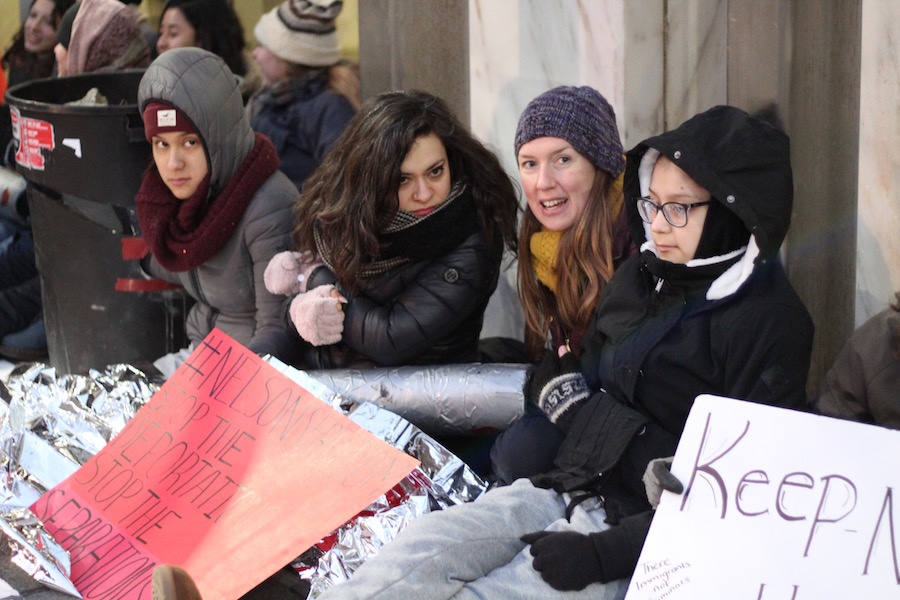 Thirty-three activists risked arrest for shutting down a federal building in Hartford. Hundreds more came up to support them. And in the end, no one ended up behind bars—although a few found that their feet and hands had turned to temporary blocks of ice while protesting an agency that bears the same name.

Friday morning, activists from Unidad Latina en Acción (ULA), Hartford Deportation Defense (Defensa contra las Deportaciones), and Connecticut Immigrant Rights Alliance (CIRA) gathered at the Abraham A. Ribicoff Federal Building on Hartford’s Main Street to protest Immigrations and Customs Enforcement (ICE) on the one-year anniversary of Nelson Pinos’ entry into sanctuary at First and Summerfield United Methodist Church, where he has been living for exactly 365 days. The hope, said ULA cofounder John Lugo, was to shut down ICE operations at the building, where the agency's Hartford operations are conducted.

Of those who came out, 33 sat in front of the building, forcibly blocking the entrance to the building as they linked arms, chained themselves to each other, and buried their hands in short, duct-taped pipes and barrels filled with cement and rocks. After arriving just before 6 a.m., the 33 remained in front of the building until after 10 a.m., then marched to Hartford’s nearby City Hall to conclude the protest in the atrium. 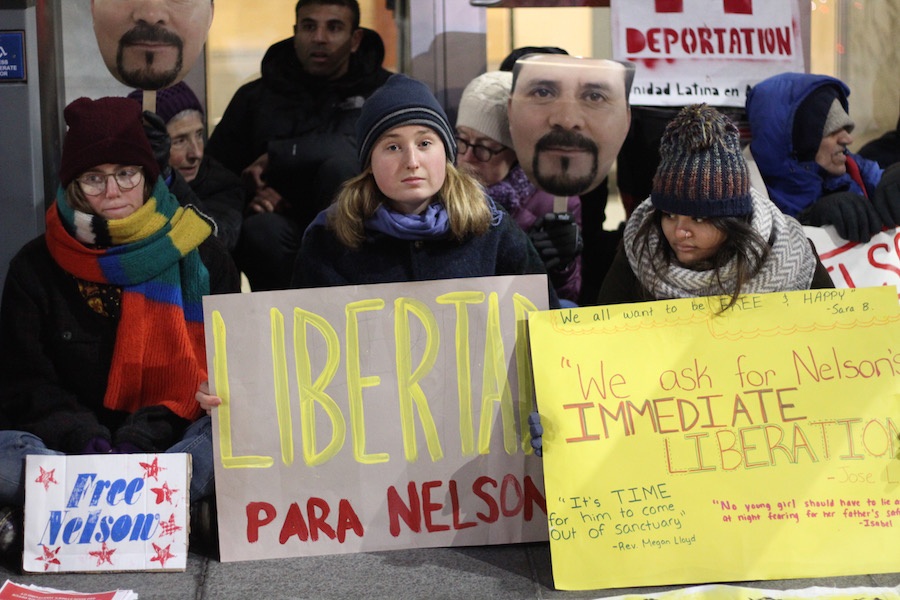 The protest comes on the heels of ICE’s rejection to grant Pinos a stay of deportation last week, a decision that followed an emergency appeal from his lawyers,Tina Colón Williams and Yazmin Rodriguez, in October. While the protest was organized before that decision was issued, Lugo said it gained a new sort of significance in the week following.

“The value of protest—that’s the only option we have right now,” he said Friday morning at the Federal Building. “I think when the law is denying your side and the law is against the people, the feeling of the people, it’s up to us to do something about it. That’s why protest has been the answer for a long time. To really provide a voice to the voiceless."

"In this case, Nelson has somebody [Hartford ICE Director Aldean R. Beaumont] who has the power to give him his freedom," he continued. "She decided not to do it, and we have to let her know that we’re really not happy with that.”

Protesters and organizers began their day in the pre-dawn hours, many driving from New Haven to Hartford at 5 a.m. to get to the Ribicoff building well before it opened. As they sprang into action in the dark, they organized foam mats, weighted barrels and locks, chaining themselves to each other and taking their places quickly on the ground. 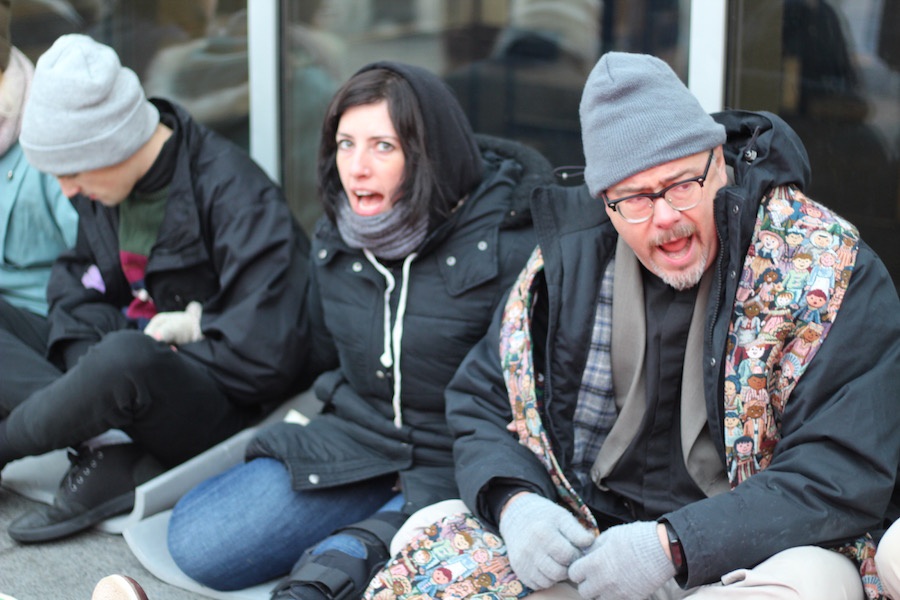 As they sat together, they traded anecdotes, many cuddling into each other for warmth by the 30-minute mark. Near one side of the building, Pinos’ daughters Kelly and Arlly curled up next to Mary Elizabeth Smith and Catherine Rodriguez, getting comfortable as security guards inside the building paced back and forth, lifting their phones to their ears.

“I hope that people see that we don’t care, we’re going to do whatever it takes to get my dad home,” Arlly Pinos said.

Close to her, Kelly recalled the shock and emotional pain she experienced exactly a year ago, when her father announced he would be going into sanctuary at First and Summerfield as the most likely way to keep their family together.

For 26 years, Pinos had worked in New Haven without a problem. And then he showed up to a routine check-in with ICE officials last year, and they served him deportation orders to his native Ecuador. In the 12 months that have followed, Kelly said she's struggled with her schoolwork—she is a junior at Wilbur Cross, and wants to go on to school to become a nurse—juggling a new part-time job with school, family visits, and the trauma of not having her father at home. 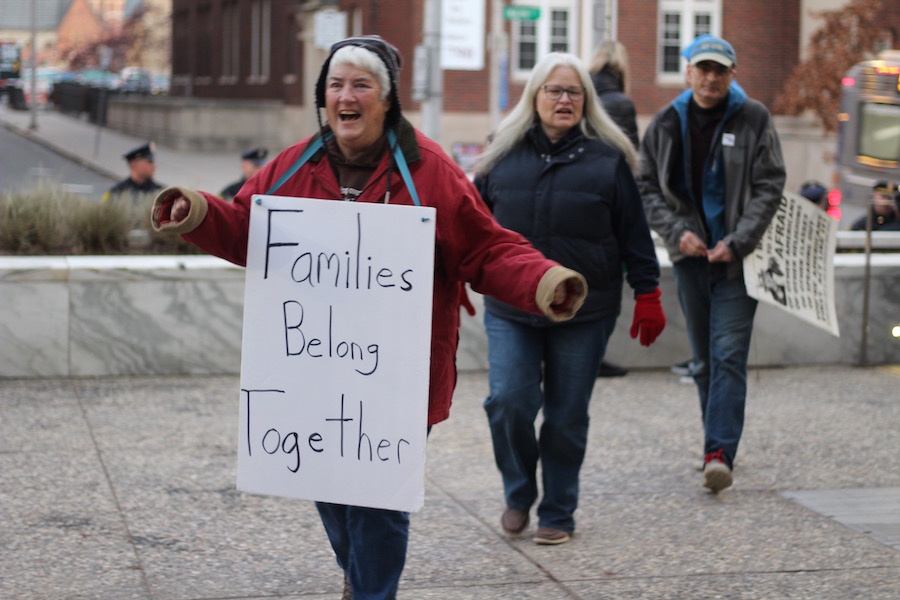 “It is difficult, because it changes your whole lifestyle,” she said. “One moment, you’re happy, all together, happy and living life, but in the next, you’re separated. You start feeling down, you’re in a mood where you don’t want to do anything. It’s just the worst feeling anybody could ever have.”

“That day, I was scared, sad, crying—and I still feel like that after a year,” she added. “It’s been one year, and I’m just asking them [ICE], especially Director Beaumont, to just give my dad a stay. Is she not tired of hurting families? Can she at least do us that one favor? That’s all we’re asking for.”

Around her, activists launched into cheers of “Free/Nelson Pinos! Free/Nelson Pinos!” From the other end of the human chain, ULA member Jesus Morales Sanchez began a chant lauding Pinos’ humanity and advocating for his wife and three children, the youngest of whom is only six. He shouted the words, his voice cracking in the cold air as 32 other voices joined in like a Greek chorus.

Nelson Is/Somebody!
And He deserves/Freedom!
Right here, and right now.

He repeated the cheer for Pinos' wife, changing it slightly for her, then Kelly, Arlly, and Brandon. As a pink dawn broke over Hartford, supporters began to trickle in, soon entering the building’s plaza by the handful.

Some came with bullhorns, hand-drawn signs, and flyers on the Pinos family, passing them out to as new faces appeared in the crowd. Others, like public defender and Hartford Hot Several frontman Josh Michtom, showed up with instruments in tow. Several New Haveners poured out of cars, soon hopping form foot to foot to stay warm as they called for Pinos’ freedom.

Boxes of coffee and small plastic containers of pastry appeared on a nearby ledge. At some point, a young girl started selling chocolate bars for $1 each, supporters buying up a few each and distributing them with water, coffee and bites of food to those sitting against the building. The Rev. Scott Marks, whose UNITE HERE! office is located at First and Summerfield, began leading attendees in “We Shall Not Be Moved,” the crowd swelling to over 100 before he got to the end of the song. He picked up another chant, bellowing “Keep!/Nelson Home” in a kind of call and response. 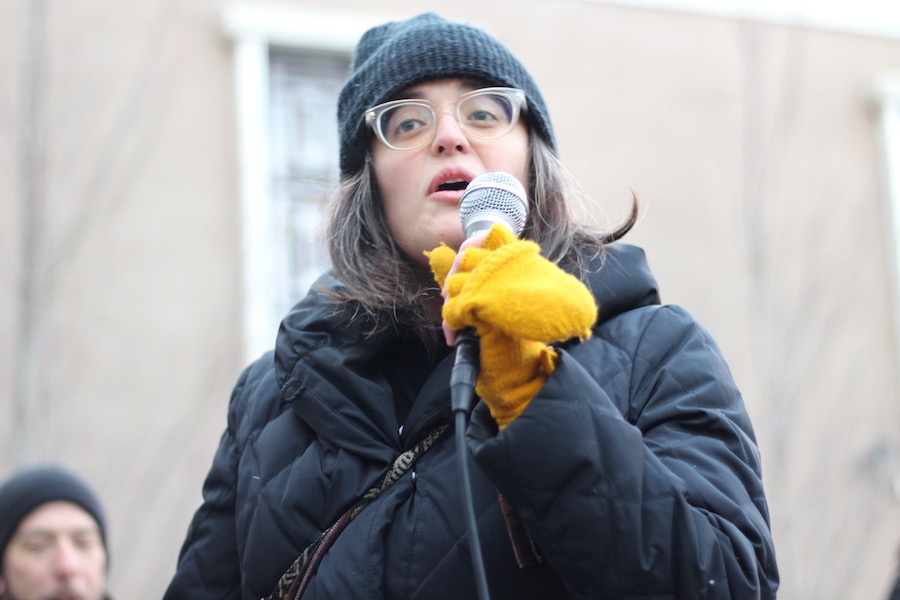 Just yards away on Main Street, Hartford Police had begun to show up, their uniforms an even sea of blue against traffic. More sirens grew closer from the distance. Behind them on the street, pint-sized passengers of a school bus pressed their faces to the bus’ windows, a few pumping their arms in support. Back at the building, Hartford Deportation Defense’s Constanza Segovia (pictured above) took the handheld speaker.

“We will not allow for Nelson Pinos to spend a whole year in the church where he has seeked sanctuary so that he is not deported and separated from his family,” she shouted, the crowd murmuring in agreement as she spoke. “We will not allow the year to complete. We will shut this building down before that happens … we will stay here as long as they will allow us. All year, if that is what we need to do.”

Segovia’s remarks kicked off a packed lineup of speakers, from First and Summerfield Pastor Vicki Flippin to undocumented immigrant activists who spoke about their own experiences with ICE and Customs and Border Patrol (CBP). Taking the speaker at one point, Marks recalled how he often passes Pinos in the hallways, and has to fight tears until he is out of Pinos’ sight. Just as Flippin had before him, he urged Beaumont to reverse ICE’s decision on Pinos' stay of deportation, praying aloud that she and other ICE officials would change their minds in the face of love. 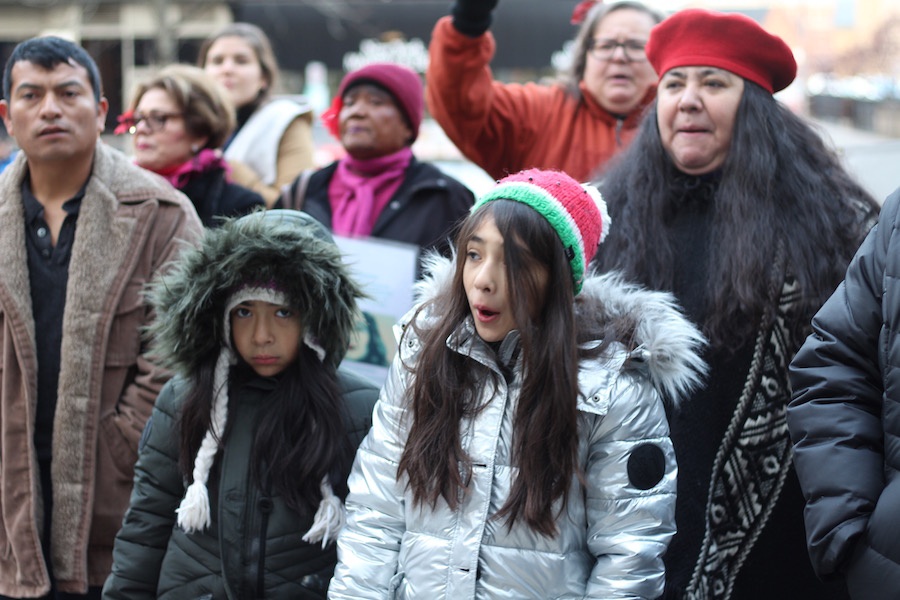 “Listen: this is hate,” he shouted. “This is hate. And today we stand here together in love. The love for Nelson’s family. The sacrifice Nelson is making because he loves his family. And I know this one thing: that we’re fighting for the freedom of black and brown people that live in this country, that are locked out of opportunities that we all deserve together. And the one thing that is happening for us right now, in this moment, it is driving us closer together. It’s bringing us closer together like never before … because if there’s ever a time for us to stand together."

By now, close to 150 filled the plaza. From the crowd, Eric Cruz López of CT Students For A Dream recalled his own immigration experience at seven years old, during which CBP officials pointed a gun at his head at the U.S.-Mexico border. He denounced ICE and law enforcement, leading the crowd in a chant of “¡La poli, la migra, la misma porquería!” (the police and border patrol are one in the same).

As others prepared to speak and lead the crowd in song, a fleet of Hartford police moved in, ushering people back. Marks launched back into “We Shall Not Be Moved” as attendees—except the 33 activists—headed to the sidewalk. Police formed a line in front of the activists. And then, just as it looked like they might move in for arrests, they turned and went back to the other side of Main Street, where they stayed for over an hour. 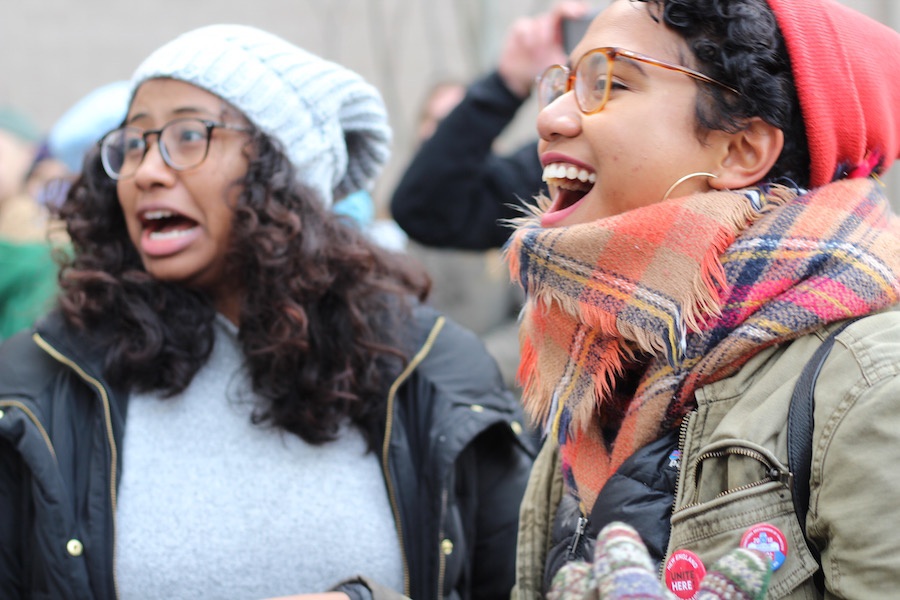 As they left, activists headed back to the plaza once more, their numbers dwindling in the 30-degree weather. They began a kind of dance party to fight the chill, launching into versions of “We Shall Not Be Moved,” “When The Saints Go Marching In,” and “Welcome Immigrantes” that had members of the crowd dancing in a wide circle. Strains of spoken word and impromptu speeches floated through the air.

From CIRA, Alok Bhatt led attendees in a blood-pumping chant of “Up, up with liberation! Down down with deportation!” miming a kind of jumping dance that went along with it. A few people who had court dates in the building began to show up, puzzling over the building’s blocked entrances. All of them declined to comment or identify themselves.

With their bodies still blocking the building after three hours, members from ULA were finding inventive ways to stay warm. New, heavy blankets appeared out of nowhere, dropped off by attendees who drove in after hearing about the action on social media or from their friends. Some members rested their legs on half-consumed coffee containers that were still warm and dug into the bars of chocolate that had made the rounds just an hour or two before. 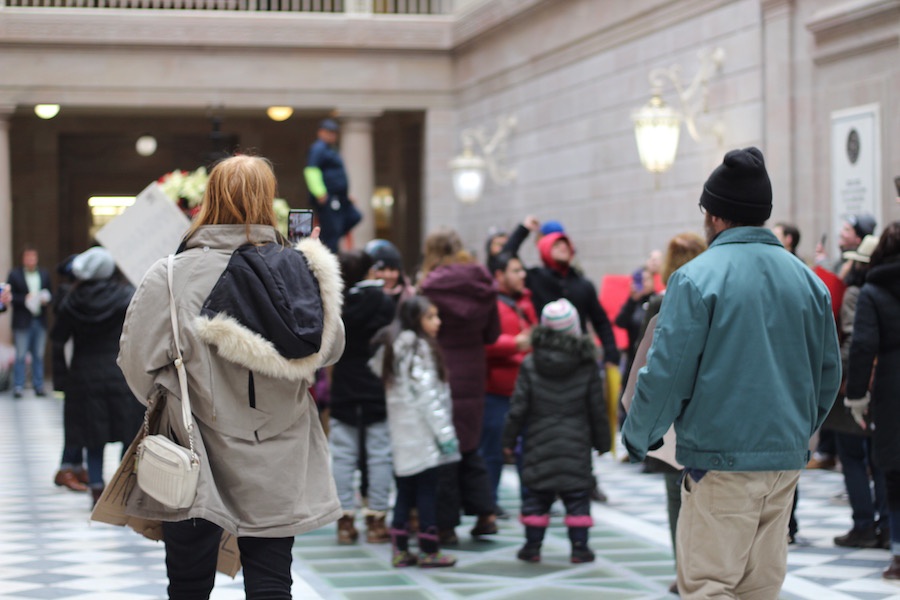 At 10 a.m.—with murmurs that Homeland Security might get involved—the group rose, declaring victory, and marched on City Hall nearby. En route, Lugo said that the federal building had had to declare lockdown between the time it opened and activists left, canceling appointments and putting the day's schedule at a standstill. Reached by phone Friday afternoon, security officials at the building said they could not confirm that that ever happened. As of noon, a security officer did say it was “running as usual.”

“This is a victory for the movement,” said Lugo when everyone had arrived at City Hall, filling the foyer. But he added that the group’s fight for more just immigration policies is far from over, and will include many more immigrant families like Pinos’ in the years to come. “It’s a call for more people in the streets.”