"We Are Not A Virus" 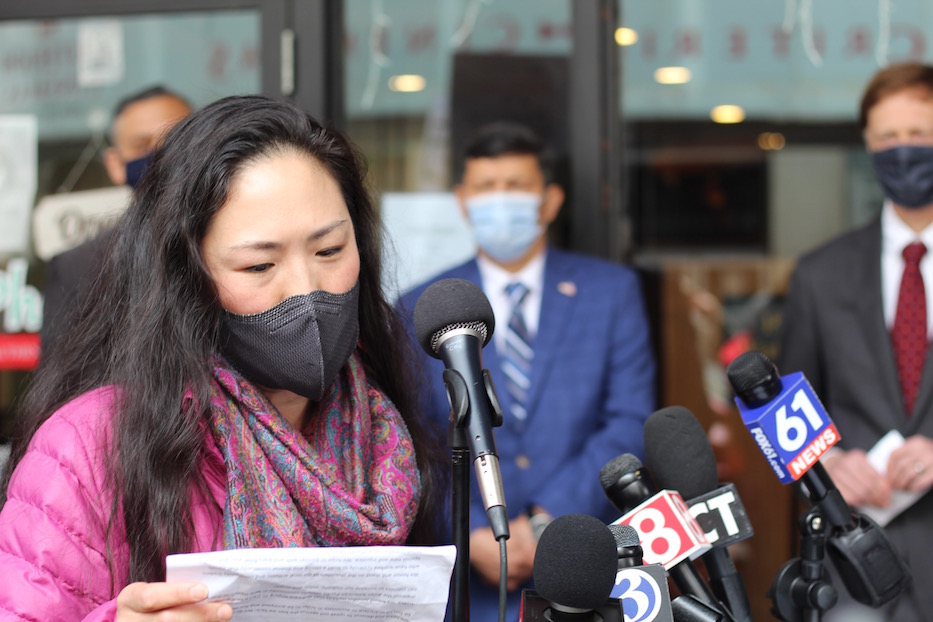 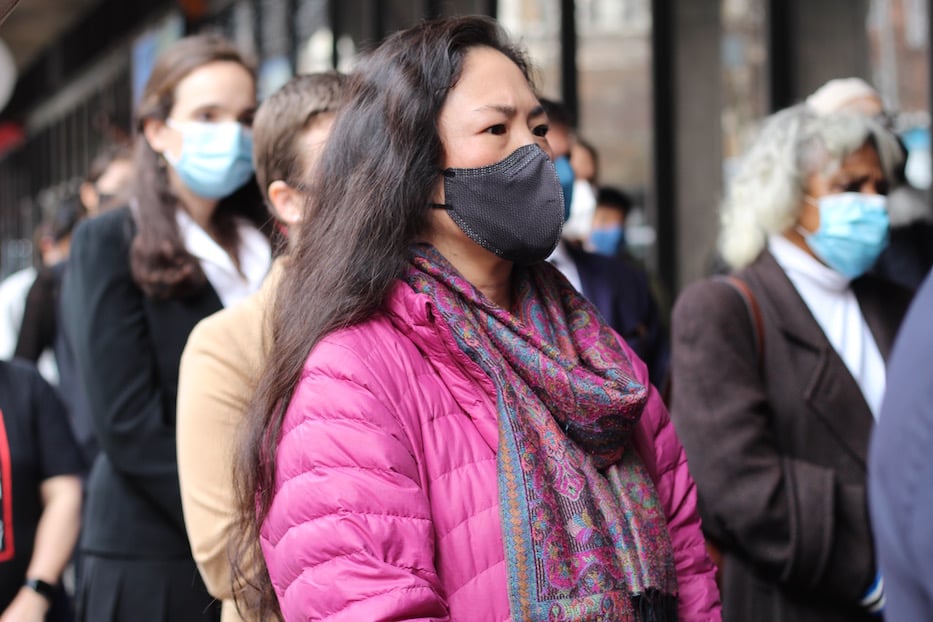 Christine Kim. "We are not a monolith," she said. "We are immigrants and descendants of immigrants that come from the largest continent in the world." Lucy Gellman Photos.

Christine Kim felt paralyzed when she heard about the shooting that killed eight people, including six Asian-American women, in Georgia last week. Jennifer Heikkila Díaz told herself to compartmentalize, so she wouldn't cry in front of her young daughters. A week later, both of them have mobilized to fight anti-Asian hate and bias in New Haven and across the state with a new grassroots coalition.

The two announced that partnership Thursday afternoon, in a press conference and rally downtown to denounce the rise in violent and racially-motivated crime against Asian Americans and Pacific Islanders across the country. Among elected officials, faith leaders, scholars, and small business owners, Kim joined a call for intersectional justice, anti-racist education, and heightened awareness of anti-Asian discrimination in New Haven.

“As people, we are not a virus,” she said, her voice rising over Temple Street. “We are your neighbors, classmates, teachers, students. We’re doctors, nurses, patients, business owners, employees, customers, and yes, we are Americans. We are diverse and vibrant, strong and beautiful. We are here, we are growing, and we will not be silent or invisible any longer.”

The press conference was held outside the restaurant Pho Ketkeo downtown, where co-owner Ketkeo Rajachack has survived a violent physical attack and multiple acts of vandalism to the restaurant and her personal property in the past year. Rajachack, who is Laotian, spoke through former restaurant manager Samson Sou. She thanked attendees for coming out in solidarity and asked for their continued support. 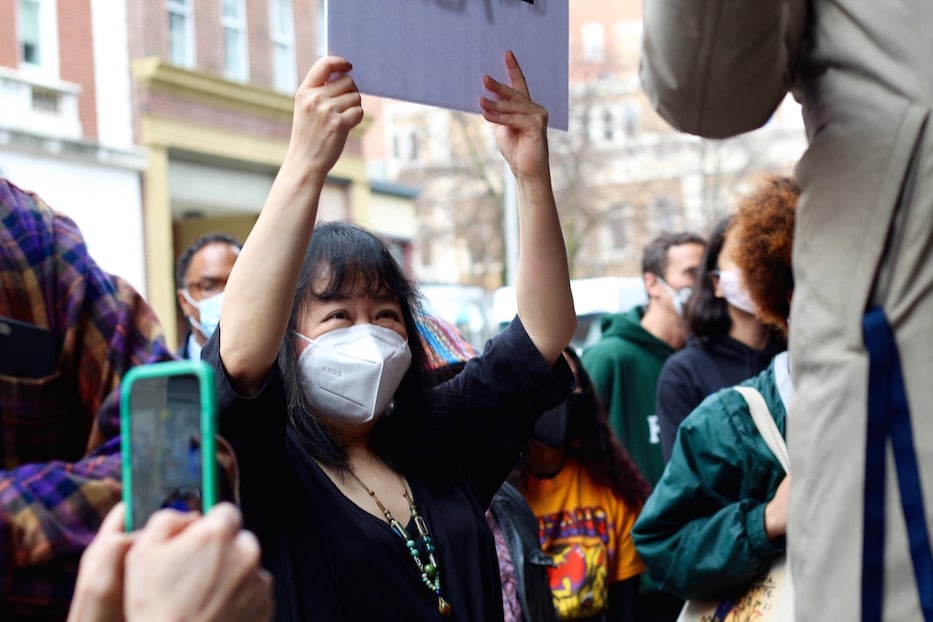 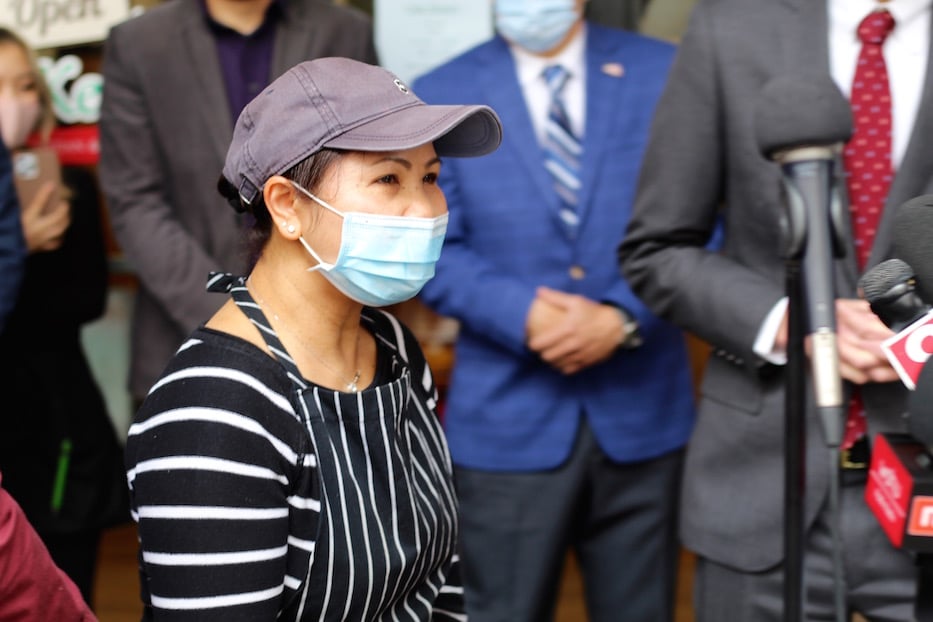 Top: Attendees turned out with handmade signs that included the messages "Racism is a Virus" and "Let Us Stop Hate." Bottom: Pho Ketkeo co-owner Ketkeo Rajachack. She runs the restaurant with her daughter, Christine Son.

“It means a lot for you guys to support us and finally recognize what’s been going on and recognize her case,” Sou said, pausing to translate. He leaned his head tenderly and nodded. “She just wants to say that she opened this restaurant to bridge our communities, stop seeing these differences that you see between us, and that we’re not really so different. That’s why she started the restaurant. To welcome you to our culture, to try the food, to recognize her as a citizen of America.”

Several speakers noted a years-long spike in verbal and physical violence against members of the Asian American and Pacific Islander (AAPI) community. In a report released this month, the grassroots organization Stop AAPI Hate reported 3,795 instances of anti-AAPI hate crimes between March 19, 2020 and February 28 of this year. Those incidences, which represent a 150 percent rise in anti-Asian bias and hate crime, include the deadly attacks on two elderly Asian-American men in California in January.

This month, the Anti-Defamation League (ADL) also released a report on online harassment that documented a six percent rise among Asian Americans, from 11 percent to 17 percent. That marks “the largest single year-over-year rise in severe online harassment in comparison to other groups,” according to the organization. Thursday, Connecticut ADL Director Steve Ginsburg drew a line directly from former President Donald Trump’s anti-Asian rhetoric around Covid-19 and the leap in violent and deadly crime in both the physical world and cyberspace. 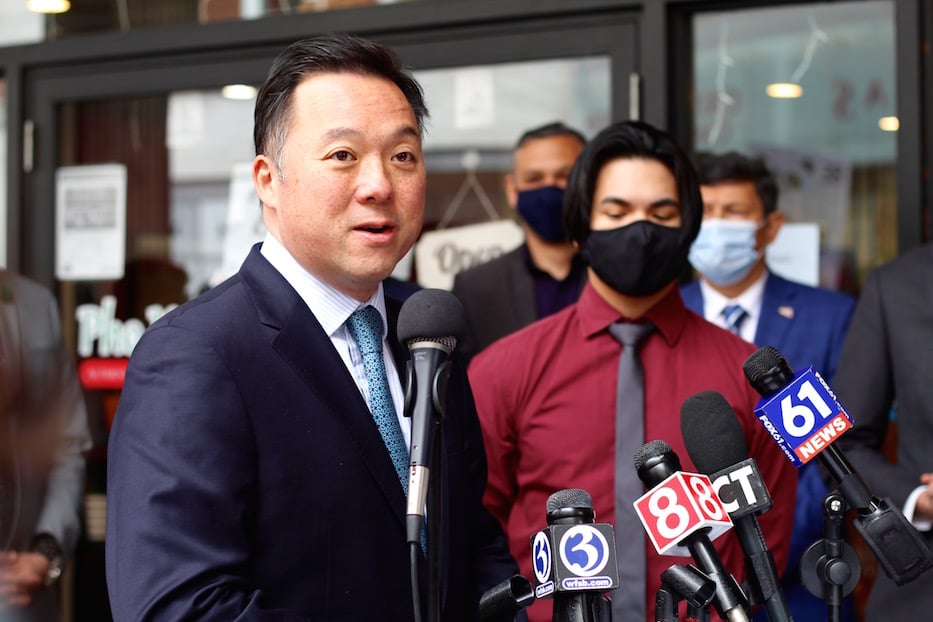 William Tong: "As Asian Americans, we are largely invisible in the national conversation about race and racism and hate and discrimination."

Connecticut is not immune to that violence, said Attorney General William Tong. Taking the crowd back in time, he recalled growing up as the child of Chinese immigrants who worked seven days per week, 15 hours a day in the Chinese restaurant they opened and operated in Hartford. Long before he was a student at Phillips Academy Andover and Brown University, he spent days working beside them.

That lived experience has given him a window into the kind of life Rajachack wants to provide for her own family, he said. Rajachack immigrated to the United States in the 1980s, just a decade or so after Tong’s parents. She opened  Pho Ketkeo with her daughter, Christine Son, in 2016. It has also given him a distinct and painful sense of how vulnerable she is, even after decades in New Haven. He asked her to come forward and stand with him as he finished his comments, to which she was greeted with a thunderous round of applause.

“One of the most damaging things about the stereotypes about Asian Americans is how unsafe they make us,” he added, noting the lethal link between racism and sexism. “And the stereotypes in particular about Asian-American women are particularly damaging. They are objectified, they are seen through a racist lens as exotic, oversexualized.” 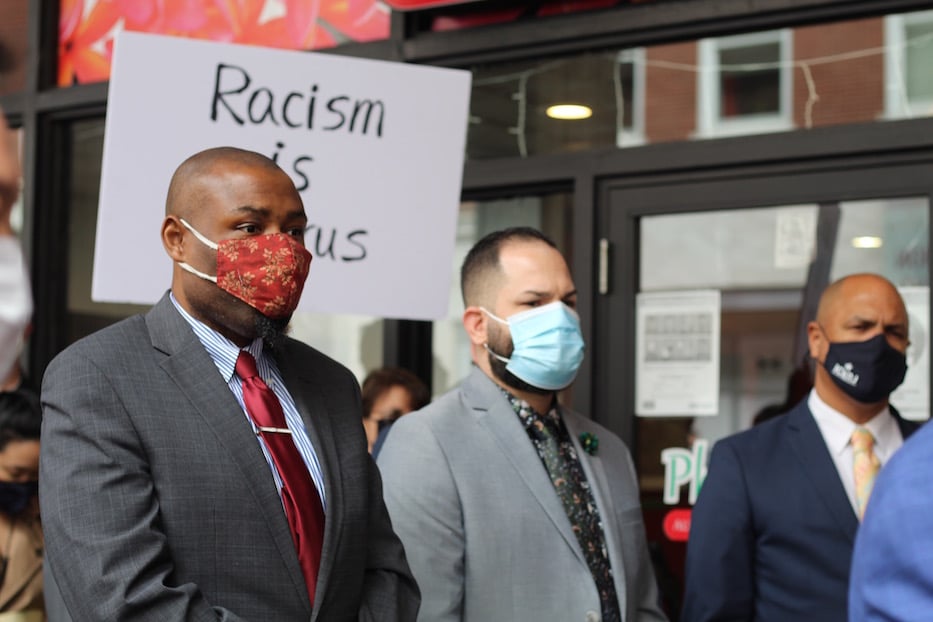 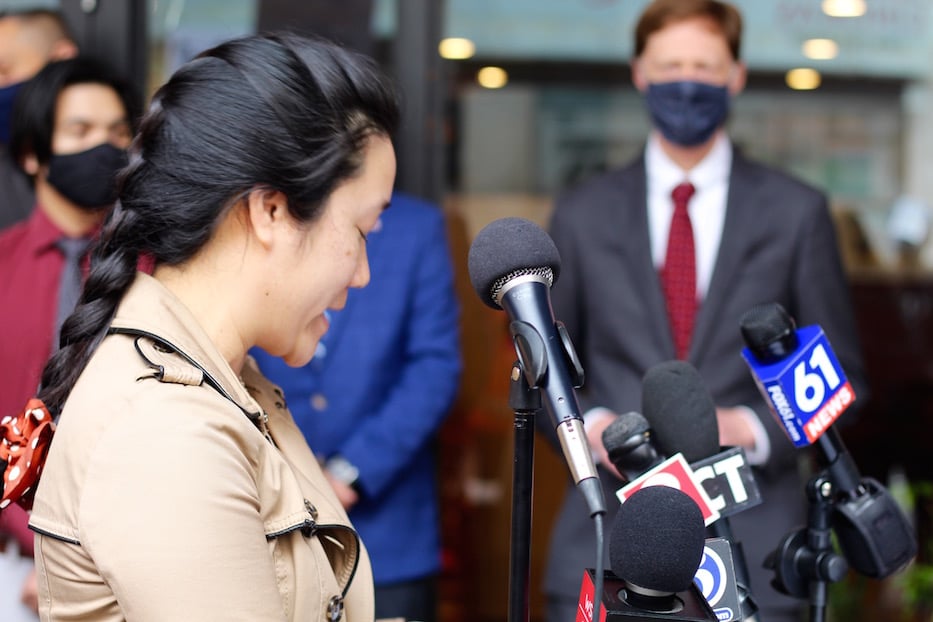 The most powerful calls to action came from Asian-American women themselves, many of whom noted that they have been reeling from the threat of violence while trying to work, parent, check in on friends, and simply survive in a world upended by gun violence, white supremacy, and the twin pandemics of Covid-19 and systemic racism.  Earlier this year, the city declared racism a public health crisis, a move that included joining the Government Alliance on Race and Equity (GARE).

Annie Lin, who currently works as the arts program director for Yale China and serves on New Haven’s Cultural Equity Task Force, called on Mayor Justin Elicker and city staff to more fully educate residents of all ages about the history and legacy of anti-Asian racism. Currently, Lin is one of over a dozen team members advising the city on its cultural equity plan, which has been in the works for over a year.

She said that when she heard the news of the shootings last week, she wept. She extended her support to members of the New Haven and wider AAPI community who have experienced violence and feel afraid to speak out. She also acknowledged the number of New Haveners who may not identify as AAPI, but are still hurting from the pain that white supremacy has inflicted on their communities.

“I am advocating for better resources for and inclusion of Asian voices in conversations about our community,” she said. “I urge the city to create inclusive public programs, to do something about public safety for our communities, to educate city employees about the diversity and plurality of Asian, Pacific Islander, and American people of Asian heritage, and to create dedicated support systems for AAPI residents and businesses.” 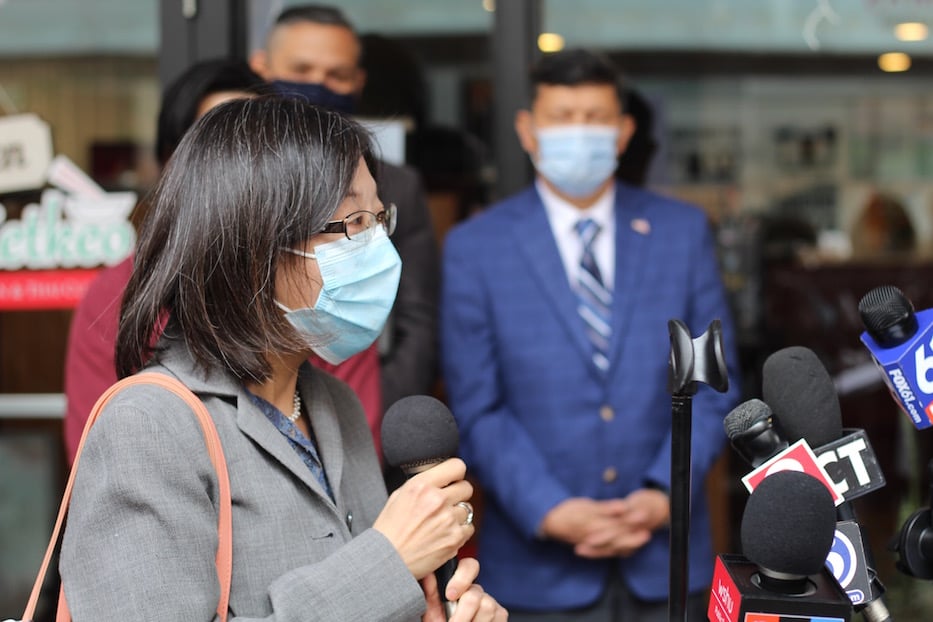 Shuei Kozu, a professor of social work at Southern Connecticut State University, asked attendees not to forget that their microaggressions also wound, however unintentional they may be. She recalled hearing from one of her students, a young man who had intervened when a group of young teenagers verbally harassed a chef at a Japanese restaurant who did not speak English. She said that she hears questions such as “where are you really from,” or has people ask to touch her hair, with a frequency that never stops bothering her.

“These kinds of things happen over and over,” she said. “And when it happens once or twice, it’s a little bit alarming. A little bit unsettling. But when it keeps happening, you start to have it all on you, and on your own identity. This is something that’s happening all over the place, all the time.”

Kim, who arrived at the event with her daughter, reminded listeners that Asian Americans are not a monolith—and don’t like being painted like one either. For the first few days after the shooting in Georgia, “I was paralyzed,” she said. She felt afraid for her children, a son and daughter who are both under 10. 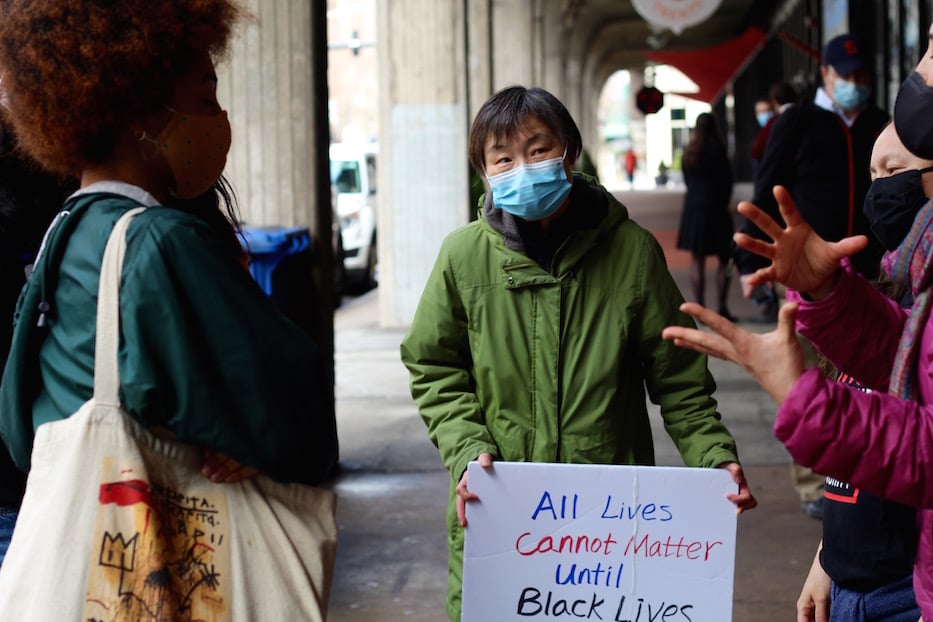 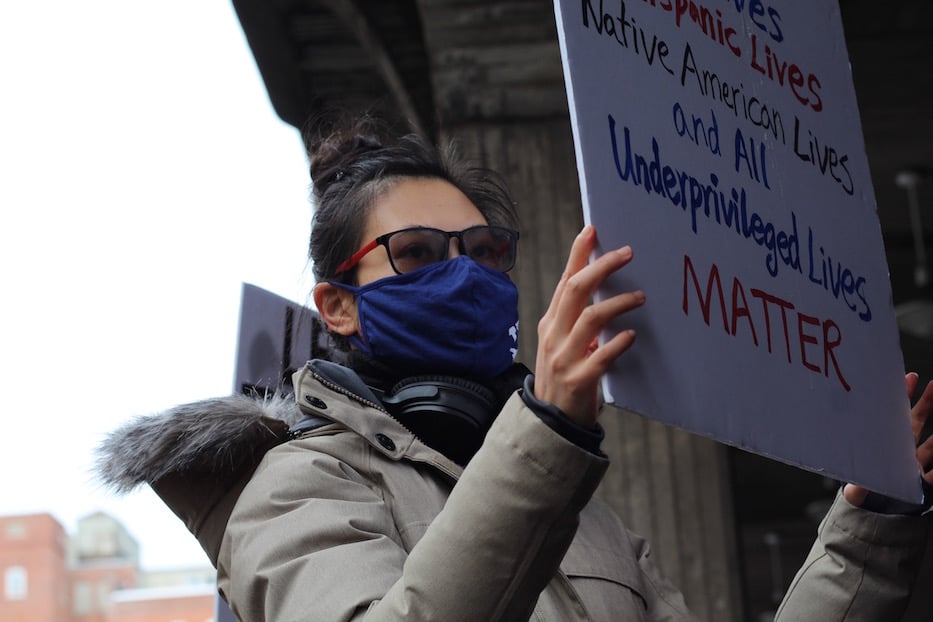 Top: Frances Wang, who lives and works in Stamford, drove to New Haven after hearing about the rally from a friend. She said that while she has encountered many types of racism in 30 years of living in the United States, the past four years have struck her as especially violent.

In a discussion afterwards, both she and Heikkila Díaz said that their idea for a coalition was born last week, after the two connected over their shared shock and frustration. Both had a desire for a greater AAPI affinity space in New Haven, where they could organize, trade collective wisdom, and build solidarity with other anti-racist movements in the city. Heikkila Díaz, for instance, is an active member of the Black Lives Matter New Haven fundraising collective. Thursday, she said that the group is just getting started. She and Kim have a community meeting tentatively planned for next week.

“We’re not sure what it will be yet,” Kim said. “We want to see what the community need is.”

Fellow speakers urged attendees to recognize that the fight for liberation and against white supremacy is an intersectional one, in which racism, sexism, ableism, homophobia and transphobia, land theft, and religious discrimination are all related.

Judy Alperin, chief executive officer at the Jewish Federation of Greater New Haven, said that she sees a particular parallel as the Jewish holiday of Passover, which begins on Saturday, approaches. In telling the story of the Jews’ exodus from slavery in Egypt, “we know that freedom and safety for any of us depends on the freedom and safety of all of us.” 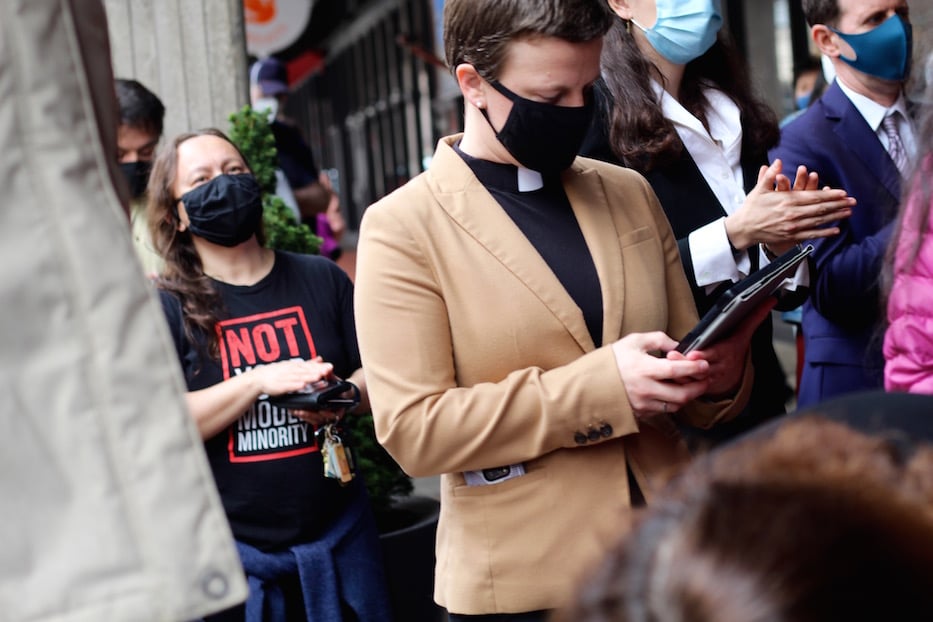 Jennifer Heikkila Díaz arrived wearing a shirt that read "NOT Your Model Minority."

The pastor at United Church on the Green, Rev. Jocelyn Gardner Spencer called on fellow white people, particularly those who identify as Christian, to turn their declarations of solidarity into power and demonstrated allyship instead of lip service. She said that the message of defeating white supremacy is especially present when she thinks of Jesus, a “Middle Eastern Jew, who spent his early childhood as a refugee,” who was crucified for caring for the most vulnerable among people.

“All the way back to the Garden of Eden, we have stories of men blaming women for their sins,” she later added. “All the way back to Cain and Abel we have stories of one group thinking they are not related to another group. And certain ways of reading and understanding those stories draws a direct line to what happened in Atlanta last week and here last summer. I also call on my white siblings to look within our hearts and our cultural inheritance to seek out the ways in which white supremacy has influenced us, like pollution in the air we breathe.”